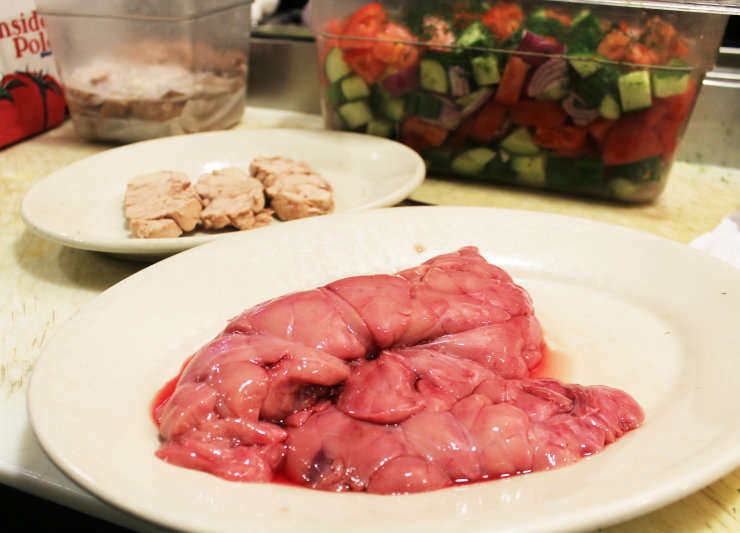 Welcome to Wild Things, where we dive into the kitchens of some of Dallas' most daring chefs to find out what wild, interesting ingredients these food artists are playing with. Whether it's a taboo ingredient or just a food item you wouldn't think you'd find at a certain establishment, it's about time someone highlighted the unconventional or unexpected. Here, we invite you to open your mind — and your mouth — to the wild things in Dallas dining.

This week, we highlight an animal gland with a misleading culinary name — one traditionally used in French cuisine. Executive chef David McMillan of the Design District's resident gastropub, The Meddlesome Moth, tells us about the wildest thing — and one of the best-selling items — in his kitchen.

What is the wildest ingredient in your kitchen?
It's very hard to define which is the wildest, but we do fried sweetbreads. Sweetbreads are two different glands that appear in either veal or lamb, [in] younger animals. They have to do with growth. We use veal sweetbreads, and it's the pituitary and the thymus gland. The thymus gland pretty much disappears as the adult comes to full size. They're both very white and creamy. Once they're poached, they look almost brain-like, in a way. Instead of the lines that you'll see etched, like at the top of a brain, these are actually little clusters that are put together. They're pink until you poach them and then they're very pale, creamy and white.

What does it taste like?
[It] really doesn't have a pronounced flavor. It's not very strong. It's not runny. It's a set protein, but it's very luxurious. [It] just has this very luxurious texture. It's not meaty. It's crossed between firm scrambled eggs and braised meat. It's very soothing. It's almost neutral. I always consider it kind of a show pony for sauces or the things you do with it.

Why did you decide to feature this wild ingredient?
We're a gastropub, so that gives us free license to really do anything we want to do and try to tie to the beers that we have or the philosophy of this place. Within the vein of what we are, it's a perfect item. It's interesting, it's not everywhere else, it definitely has our spin on it. It has a little bit of our own version brewing in it by making our own [fire cider] vinegar. We actually make our own vinegars, too. We like to have those spins on things that have some history to it, some newness to it, something that fits with the drinks you're having. While it may not be mainstream, it tastes great if you've ever had it. It's not weird just to put weirdness out there,. It's, like, weird you should try it. And you'll probably have it again.

What makes having this item in your kitchen special?
It's very non-traditional. If you haven't had sweetbreads and it's on your bucket list.. well, it should be on your bucket list because it is very, very good. You should have them at least once in your life. If you've had them, you've probably had them very French-style, which is how it's usually done. Traditional style is soft sweetbreads and mushrooms. Or you have a blanquette de veau, where you have white wine and cream reduced with sweetbreads and mushrooms and you put it with puff pastry — very rich and very over the top.

What we do is we fry it to give it that crisp texture on the outside, so it's very crispy to make it comforting, and then you have that nice, creamy sweetness on the inside. So, because of the crispness and neutrality of the meat, we've gone with a rather aggressive treatment on sauces, which you don't normally see. We do it with a Tennessee sorghum fire cider [sauce] and a black pepper aioli. So, you go between crispy, rich sweetbread to a fat, garlicky, rich aioli, and then you have that fire cider vinegar with the sorghum that cuts right through. You can make the perfect bite — y'know, get all three on one fork. Or you can go back and forth and balance it out yourself. It's fun to eat.

Sweetbreads which have been sliced and poached overnight.

The sliced sweetbreads undergo a three-step batter process. McMillan seasons the slices with salt and pepper, hits them with rice flour, dips them in buttermilk and coats them with a final layer of rice flour.

McMillan works the batter assembly line and prepares a quick black pepper aioli, which comes with the fried sweetbreads dish.

An array of house-made vinegars, including the fire-glazed cider vinegar (third from left) and fresh produce is displayed in the open kitchen. Horseradish, ginger, orange, chilies and garlic sit in cider vinegar for 90 days. Sorghum syrup is then added to the infused vinegar to add thickness and sweetness. Says McMillan: “We take that acidity and the chili and the garlic, which is still thin like vinegar, then we add the sorghum to it and it gives it a greater viscosity. So it's more like vinaigrette with no oil in it.”

A close-up of the aromatic fried sweetbreads.

McMillan with line cook Alejandro Lagunas and their dish. 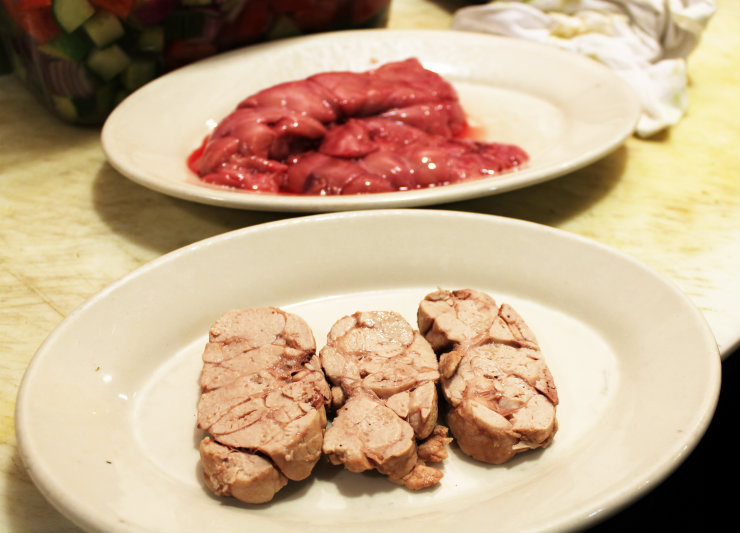 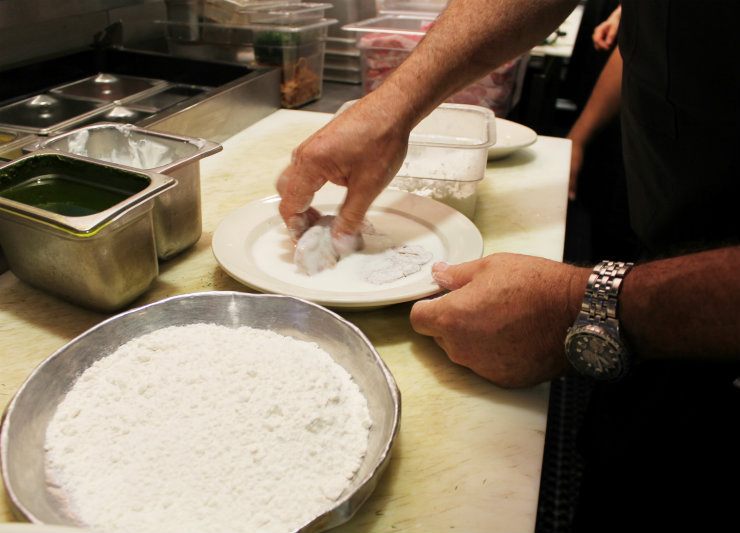 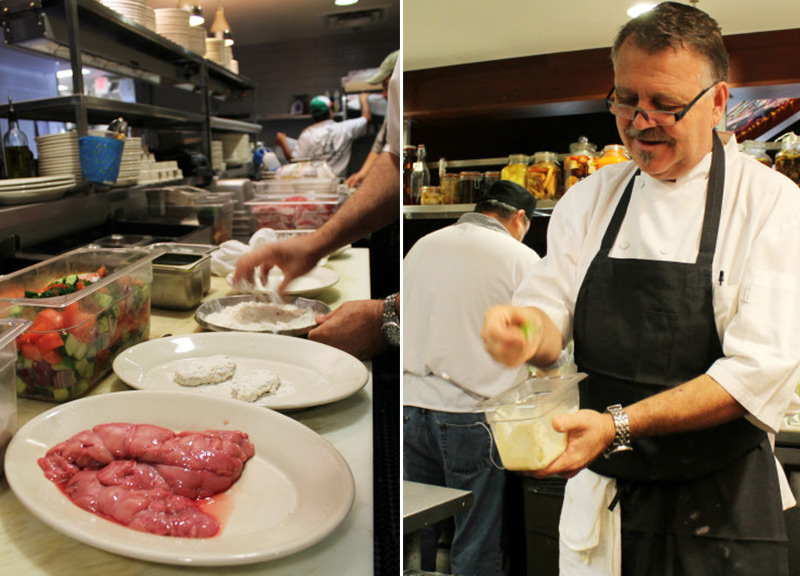 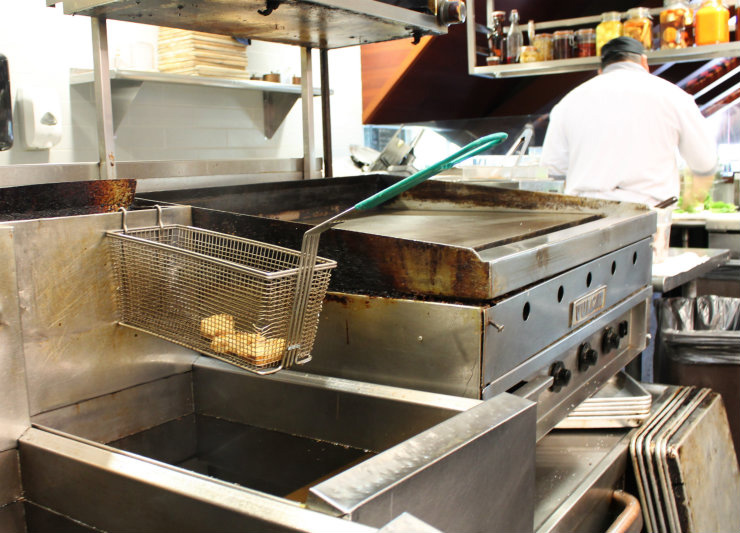 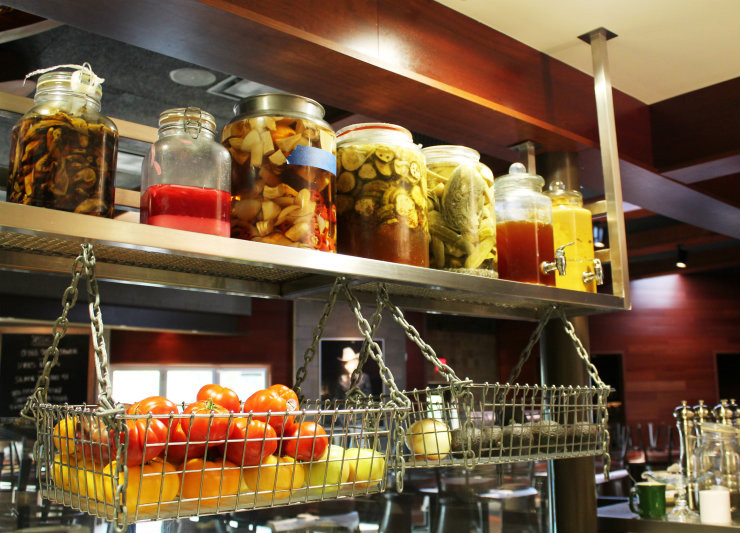 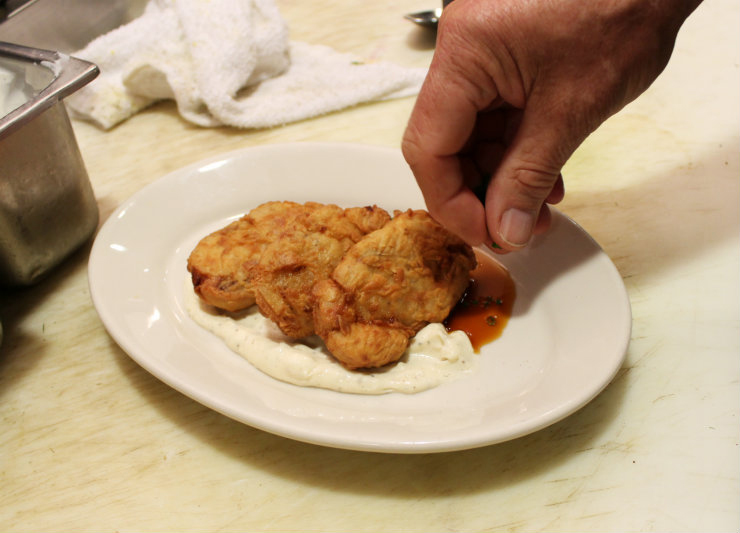 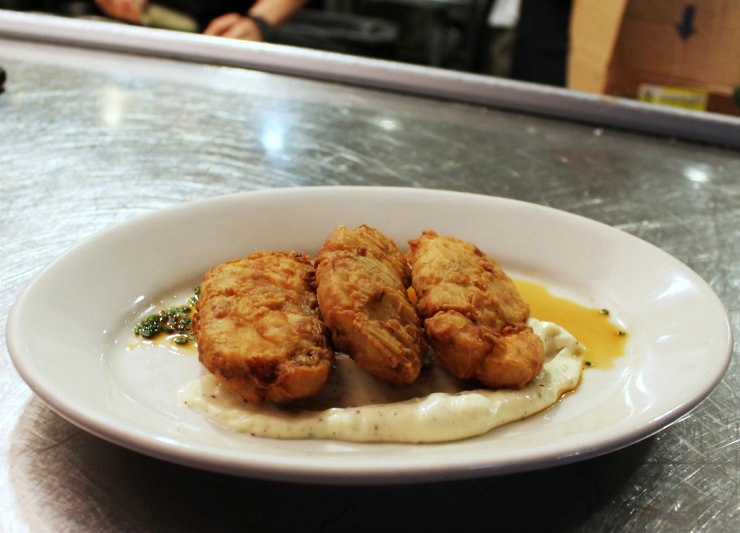 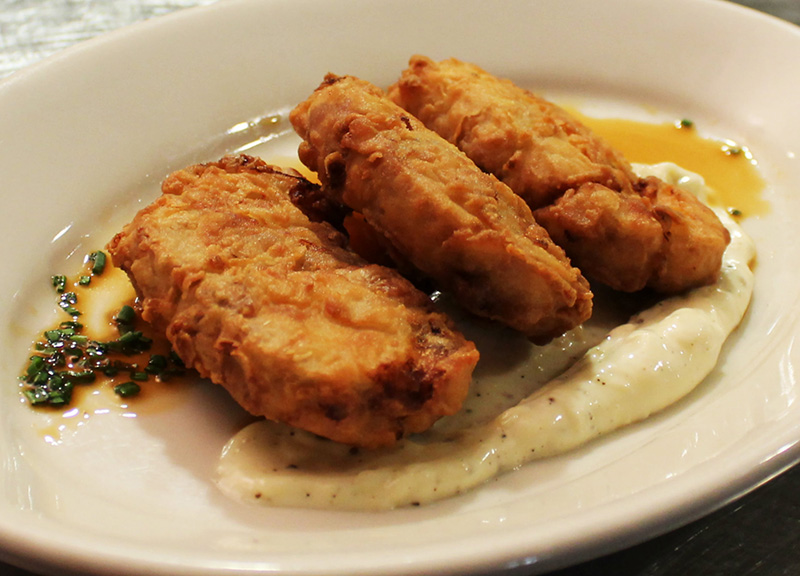 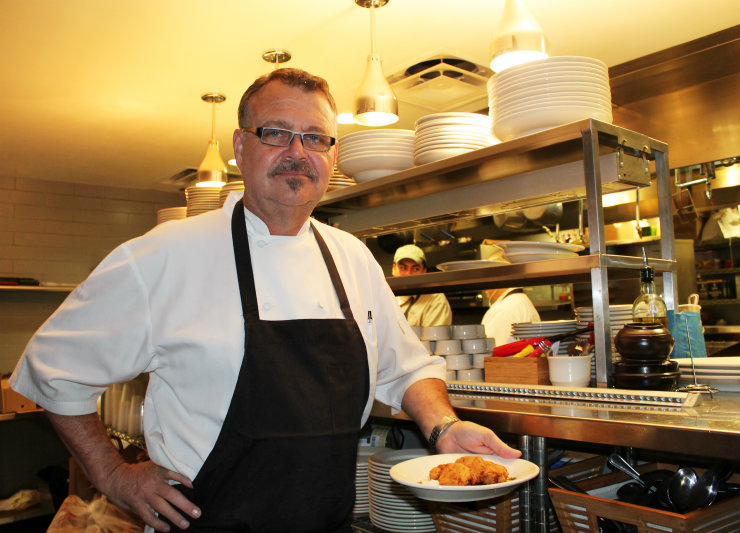 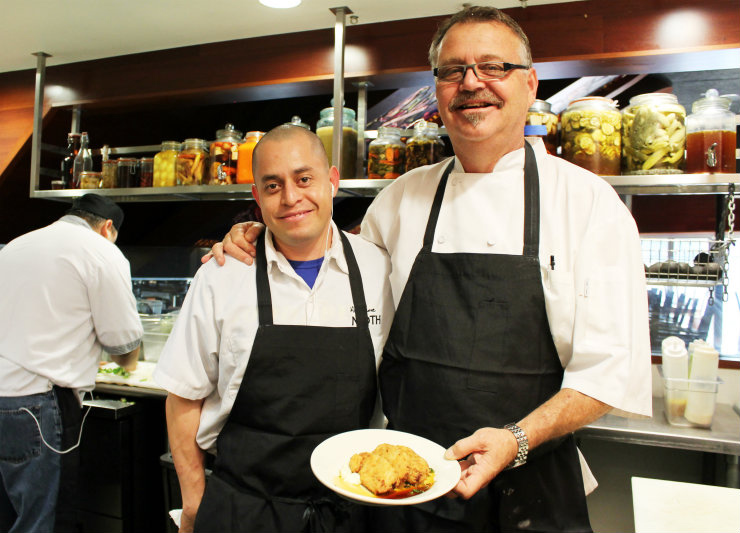