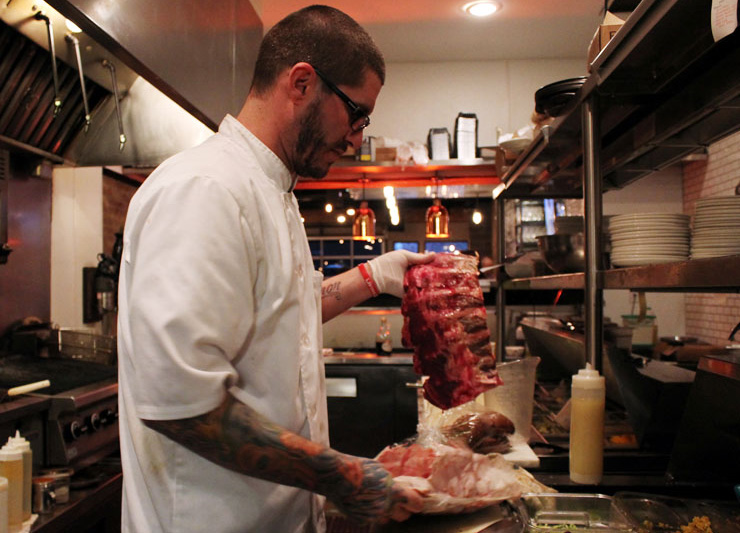 Welcome to Wild Things, where we dive into the kitchen of some of Dallas' most daring chefs to find out what wild, interesting ingredients these food artists are playing with. Whether it's a taboo ingredient or just a food item you wouldn't think you'd find at a certain establishment, it's about time someone highlighted the unconventional or unexpected. Here, we invite you to open your mind — and your mouth — to the wild things of Dallas.

HG Sply Co. has been rocking the Lower Greenville scene for a full seven months now. And, despite receiving a few less-than-stellar reviews in that time, the paleo-focused eatery remains a popular destination for the carnivores and drinkers among us.

In fact, business is going so well that the restaurant is currently in the process of expanding its rooftop patio.

Co-owner Elias Pope is glad he specifically opened his first endeavor on Lower Greenville, too, as the neighborhood is experiencing just the sort of renaissance that Pope finds exciting. He and his HG Sply Co. co-owners Constantine Antos, Neville Govender and Mark Zakem are all CrossFit cohorts who wanted to bring to this strip a new kind of neighborhood bar and grill that offered all-natural food and focused on “camaraderie, getting together after a day's work and enjoying your life.”

Even though Pope is not a chef or a nutritionist, he grew up on a cattle and dairy farm in Greenville. So he knows how important it is to understand where your food comes from and why you should avoid processed or chemically-enhanced foods. His passion for made-from-scratch, good, healthy food is noticeable the moment he begins talking about HG Sply Co.'s concept. His eyes light up as he feverishly explains the philosophy behind the bar and grill.

This is his first restaurant, after all. And the amount of work he's put into the place shows just how driven he is.

Pope left a 12-year career at Saltgrass Steak House in September 2012 to help launch HG Sply Co. He and his dad welded most of the metalwork inside of the restaurant and the wood found on the rooftop is from old stables from the Pope family ranch. He put some hard work and sweat into this place and is now figuratively embedded in HG Sply Co.'s physical makeup. And all that work that went into creating the space complements the idea behind the restaurant. The spot has a cozy feel with exposed brick walls, natural wood accents and dim lighting.

Food-wise, the kitchen prepares everything on a daily basis. All sauces, condiments and stocks are made in-house. Chef Ronnie Esposito butchers and prepares all meats in-house, as well. You won't find any butter, cow's milk or corn oil in the kitchen, either. What you will find is almond milk, coconut oil and pure olive oil. Concentrating on whole foods and putting all the hard work into preparing a fulfilling meal is something Pope and his crew believe in.

And coming up with a hunter and gatherer-themed menu, obviously, involves lots of meat. Below, Pope discusses the wildest ingredient in HG Sply Co.'s all-natural kitchen — a cut of buffalo that neither Pope nor chef Esposito had ever worked with prior to their spots open, but have haphazardly perfected all the same.

What is the wildest ingredient in your kitchen?
I think one thing that is really cool about what we're doing right now is [that we're] using buffalo long ribs on our menu. Buffalo is extremely lean, and most people use a short rib. Our buffalo long ribs are definitely, surprisingly great. They fall off the bone. They're exceptionally well-flavored, not too gamey. So, I think that would be the most interesting of the flock right now.

What does it taste like?
It's the consistency of a beef rib, but it's leaner, so it's more of a hearty meat flavor and it's got a really cool game finish. It's not too gamey, but [you can] definitely tell it's not beef or pork. It's great. The flavor is unique. It's not going to be as gamey as venison, by any means. It's definitely just the texture. And the flavor and the finish are going to be more unique than anything you've ever tasted on a rib.

We baste them and smoke it with dry rub. Then, we finish it on the grill with our house-made barbecue sauce. And then we do a small, shoestring fry. But we fry it in coconut oil with rosemary — actually fresh, organic rosemary [that] we use in the fryer. We put that in so that the French fries are these rosemary frites, and it goes really well with the barbecue sauce, so it's kinda cool.

Why did you decide to feature this wild ingredient?
We really, truly wanted to use buffalo in something. Chef Ronnie [Esposito] wanted to make some buffalo meatballs, and they're awesome. We do a buffalo meatball with a blue cheese fondue, Brussels sprouts chips and caramelized balsamic onion. So while we're doing that, we were like, “Hey, man, what other cuts can we get?” And when they said buffalo long ribs, and they come in huge, like, Fred Flintstone-looking ribs, it was perfect hunter-gatherer food, y'know?

So when we [cooked] it, we figured we could make it just like we make our pork ribs at home or on the ranch — smoke 'em. So, we did it, and they just came out extremely well. I was super excited. I was worried that it'd be too lean, but it's not. It truly is a cool flavor and it comes out great. It's awesome.

What makes having this item in your kitchen special?
I just think it's unique. I truly don't know of anybody else doing it right now. And pairing it with our in-house made barbecue that is made with all house ingredients [like] real, local honey [makes it worth it]. If you're gonna indulge in some cool ribs with a great dry rub that we make in-house, then you might as well indulge in whole foods, right?

The seasoned rack is then placed on a hot grill. After the rack hits the grill, they're smoked for hours.

Esposito cuts the ribs and sticks them back on the grill before they get slathered in the house-made barbecue sauce (left).

Esposito tosses rosemary frites with fresh rosemary. Organic ground rosemary is also added into the mix to give the frites an aromatic element.

The chef gives each rib a healthy coating of the freshly made barbecue sauce.

A load of frites and a fresh sprig of rosemary top the finished dish.

A closer look at the ribs and frites. 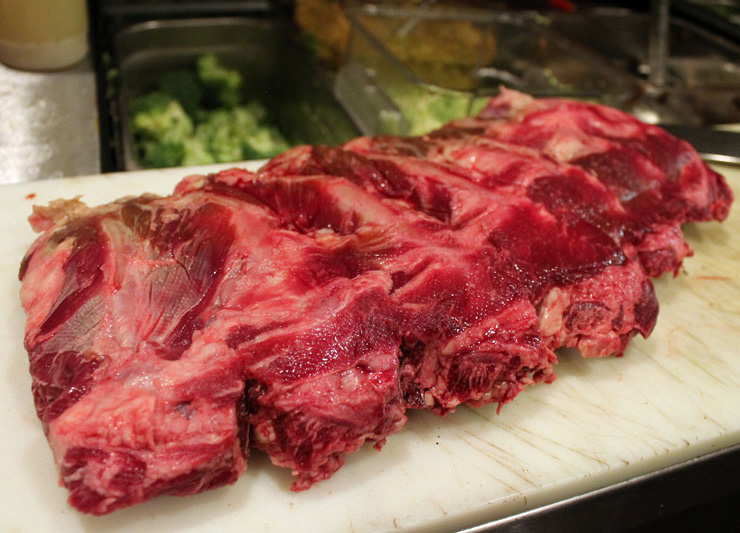 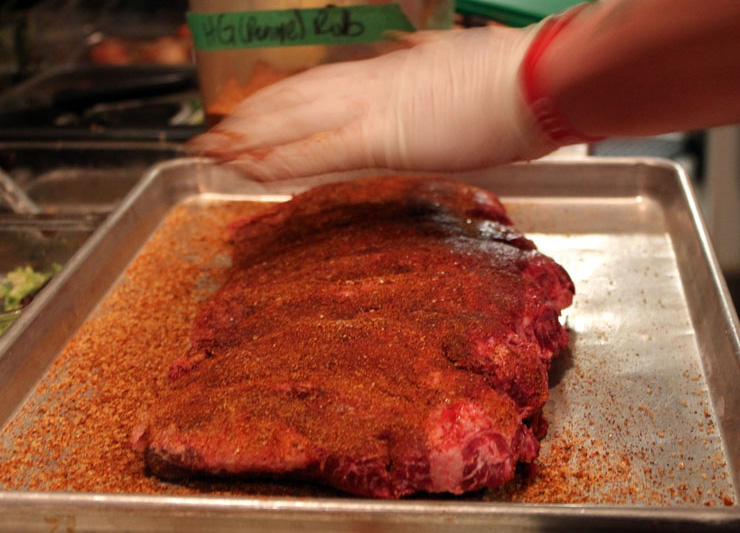 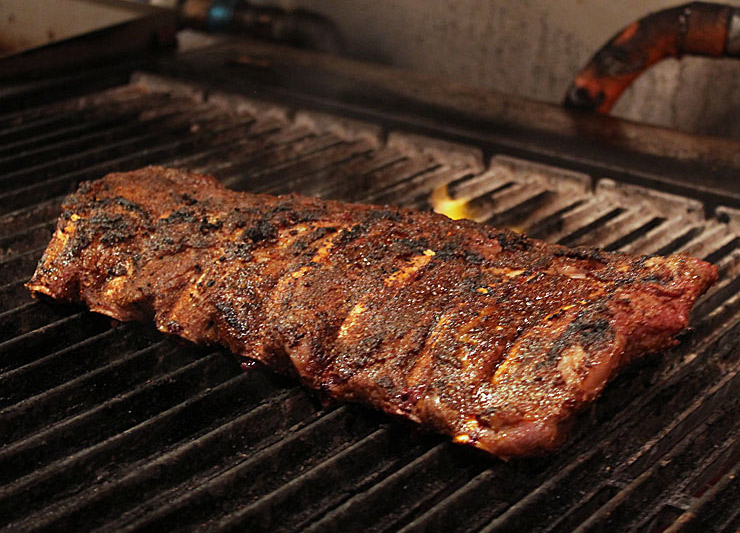 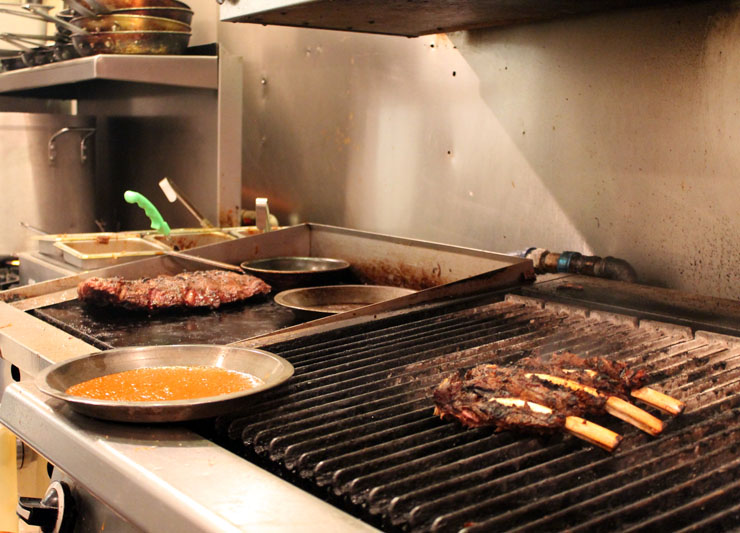 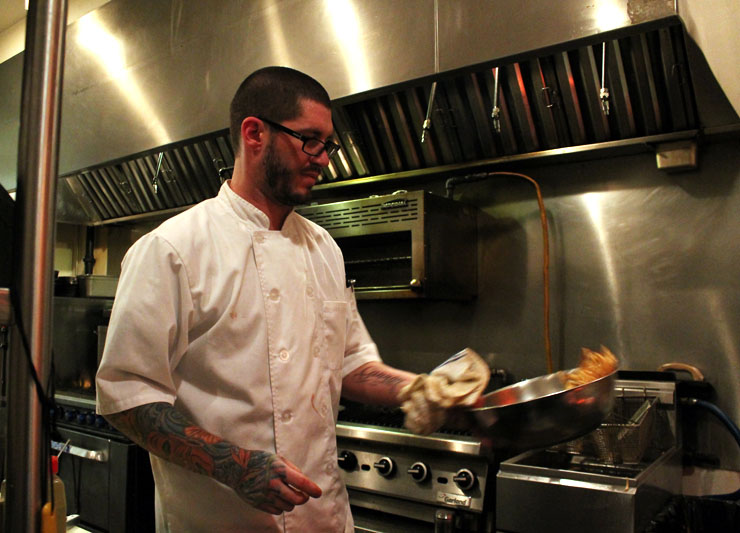 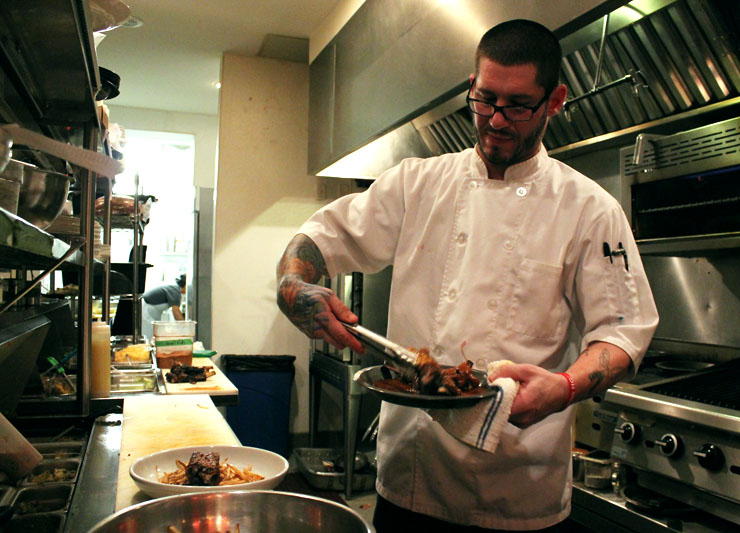 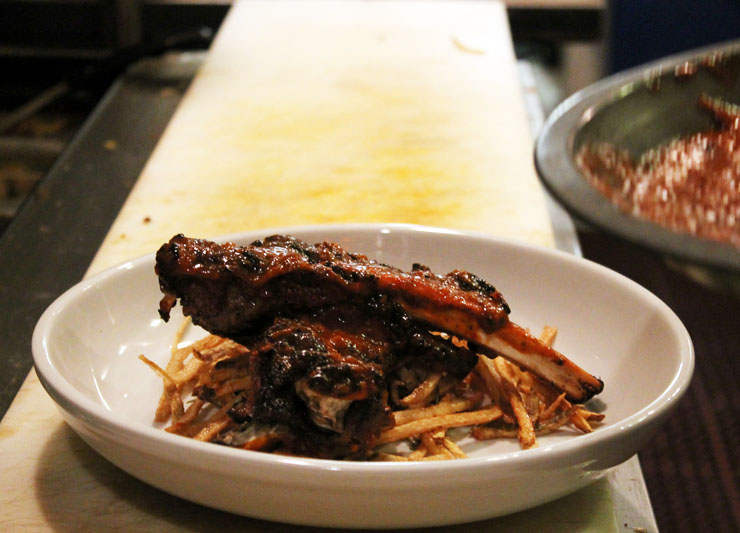 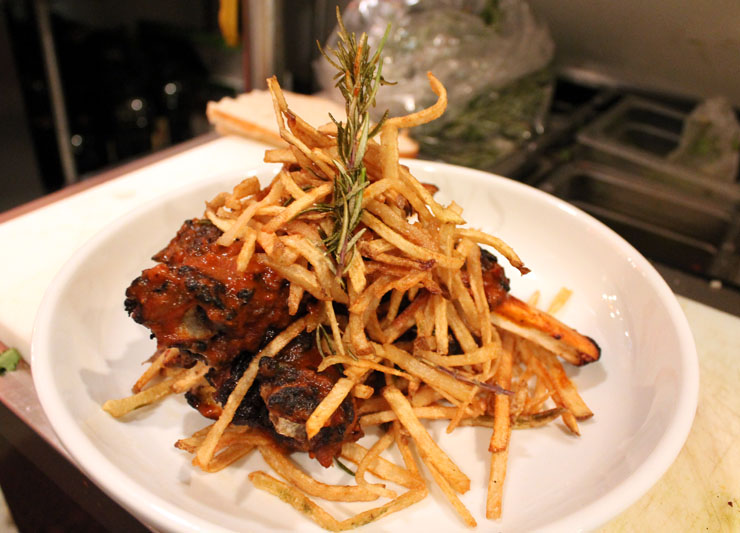 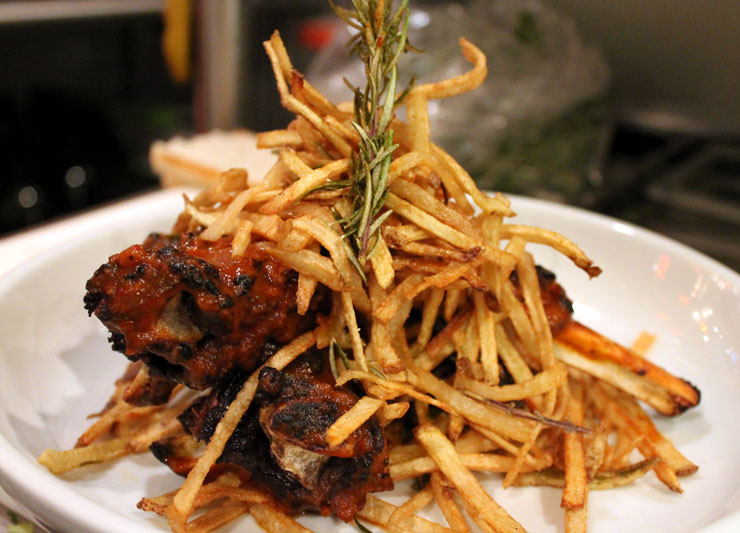 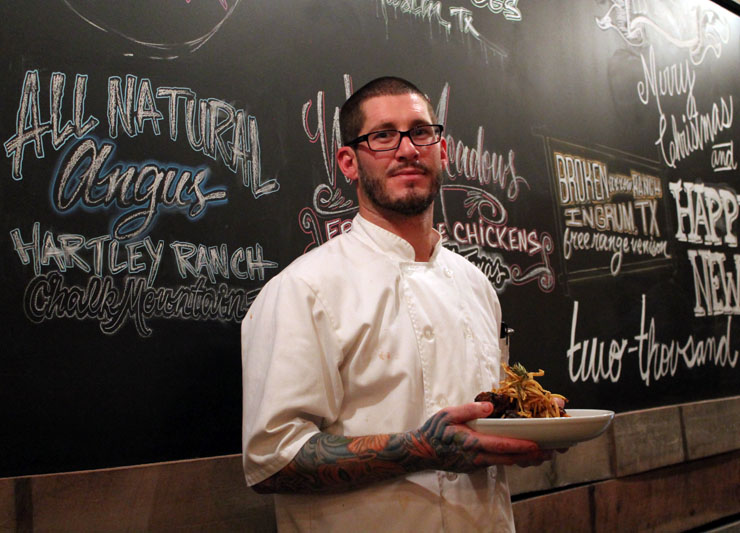