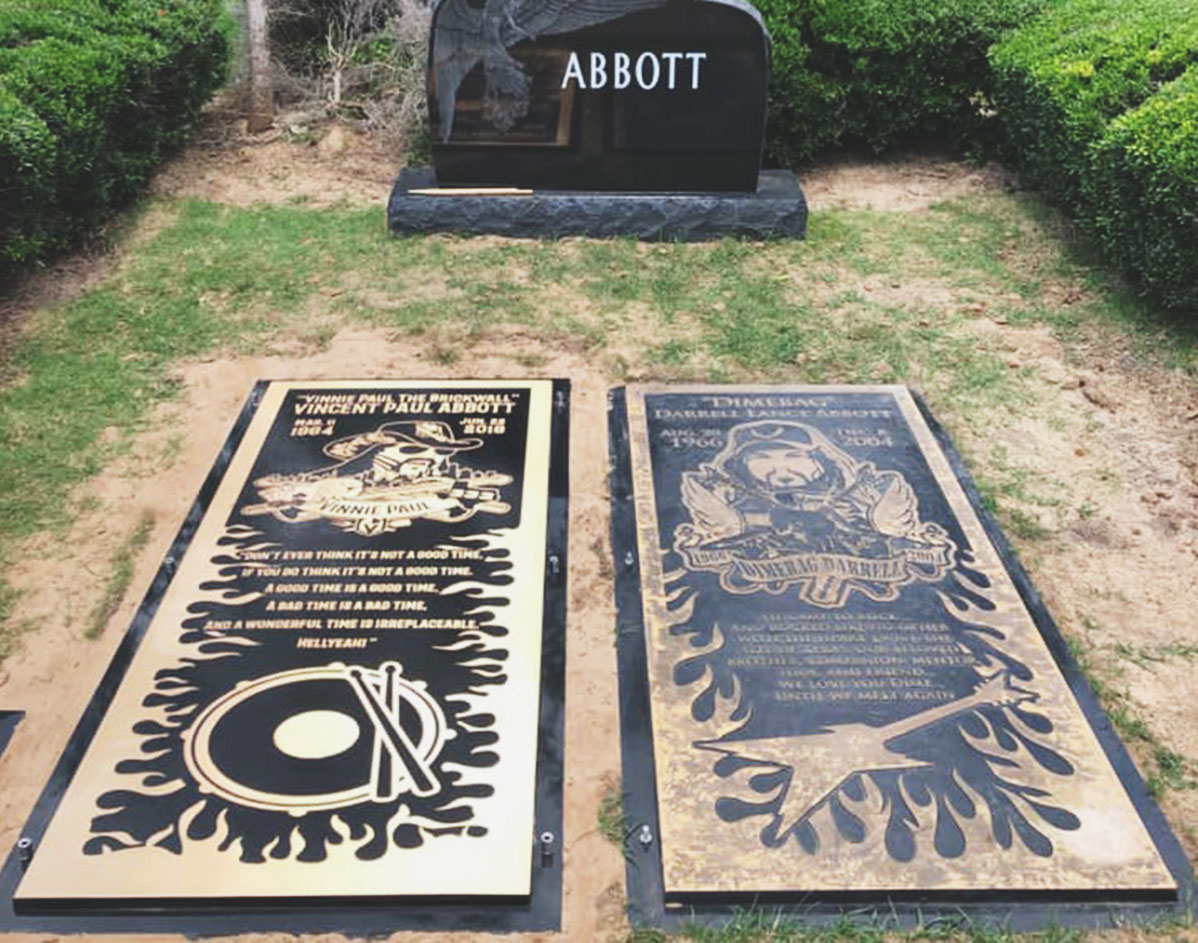 Vinnie Paul’s Grave Marker Is Unveiled, Mr. Pookie Gets A Viral Resurgence And The City’s Greatest-Ever Festival Gets A 50th Anniversary Celebration.

On Friday, for example, it was revealed that the late Vinnie Paul Abbott’s grave marker was installed right next to his departed brother Dimebag Darrell‘s at Moore Memorial Gardens in Arlington. The two were brothers in both the literal and spiritual sense, so it’s fitting that they get to lay beside each other in death.

Vinnie Paul’s Grave Marker was installed this morning. We ask that you please be respectful when visiting the Brother’s graves.

We’re not crying, you are!

Speaking of things coming together beautifully: You may recall the news that St. Vincent produced Sleater-Kinney‘s upcoming ninth full-length LP. Well, this past week, it was announced that the name of the album will be The Center Won’t Hold. The band also dropped the album art, which Annie Clark clearly had a hand in as well, and a lyric video for lead single “Hurry On Home”.

Of course, St. Vincent isn’t the only North Texas-affiliated artist making headlines this week. Why, Maren Morris has made quite a few in the past few days herself. On Friday, Rolling Stone reported that the Arlington native teamed up with revered country producer Dave Cobb (Sturgill Simpson, Chris Stapleton, John Prine) for a stripped-down, Apple Music-exclusive EP titled Maren Morris: Reimagined. The three-track EP includes acoustic versions of “The Middle” (sans Zedd, obviously), “Girl” and “The Bones.” Maren Morris: Reimagined comes out on May 31.

Earlier this month, she also performed on The Late Show with Stephen Colbert:

Another live performance worth checking out is Dallas EDM hero Medasin‘s full Electric Daisy Carnival set, which recently got uploaded to YouTube.

Speaking of festivals, here are a few closer-to-home ones that should be on your radar:

In other news, Fort Worth has had a revolving door of venues over the past few years, with the closing of rooms such as The Grotto, The Wherehouse, Live Oak and 1919 Hemphill. Now, Fort Worth Live joins that list of departed venues, as it held its last show past Saturday. Now, the owners are moving shop to a new location and working on a “neighborhood restaurant, intimate music venue and event space” called The Post. Plans of this sort were articulated in a Fort Worth Weekly article two years ago, and now they seem to finally be coming to fruition.

Sometimes in life, though, things don’t pan out — but perhaps that’s for the best. The Mineral Wells-based country songwriter Shane McAnally (Kelly Clarkson, Sam Hunt, Keith Urban) reminded us of this in an interview with Taste of Country in which he revealed that, after he helped Kacey Musgraves pen “Follow Your Arrow,” she offered the song to Katy Perry before deciding to go through with recording it herself. There’s no telling what would have happened if Musgraves surrendered the song that would be her breakout hit to a pop juggernaut like Perry, but thank god it didn’t materialize.

Musgraves has already built up quite a legacy in such a short period of time — evidenced by an exhibit that will be held at Nashville’s Country Music Hall of Fame in her honor. The exhibit will run from July 2 of this year through June 7, 2020, and will display handwritten lyrics and a detention note from her youth, among other artifacts. Tickets are now available via the hall of fame’s website.

Our formative years are important, folks. And an area parent seems to understand that, as can be seen through a viral video that’s been making the rounds in which a father and son are seen playing the keyboard line to Mr. Pookie‘s classic Dallas rap cut “Crook For Life”:

Even better? Pookie himself joined the family in a sequel that got shared online a few days later.

Another ’90s hero from Dallas who’s trying something new is Lisa Loeb, who dropped a cover of Bright Eyes‘ “First Day Of My Life” this week:

Dallas’ own Casey Orr is getting back into the swing of things too, as the bassist has officially rejoined GWAR, returning to his role as Beefcake The Mighty.

Meanwhile, area rap hero Tum Tum has been in a collaborative mood of late, too, working with a few other heroes of the local scene. Along with a new track alongside Fat Pimp called “214 Boys,” he’s also about to release a new Mo3 collaboration.

Meanwhile, Dallas’ Bella Union-signed got some nice shine from NPR this week for the song “Let Out” off his new Best Behavior LP.

Finally, let’s end this week’s column with some just-dropped visuals.

First up, rapper Alex Harris is stylin’ and profilin’ in the video for “Top Five,” his poppiest effort to date:

Doomshop Records rapper Soulzay, on the other hand, takes a more low-key approach in his new “All I Wanna Do” clip:

And, lastly, SADFACETHUGGIN continues to make the case that he’s on the verge of blowing up in his new “Detonator” video: