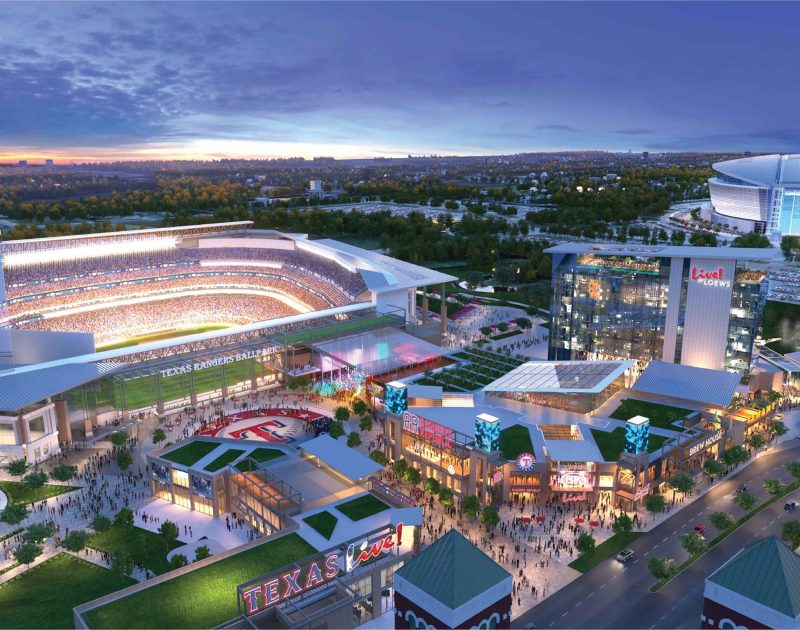 The Texas Rangers may have to ride out another three seasons of summer heat before their new covered stadium opens in 2021, but a portion of the team’s new facilities is set to open by summer’s end.

Butting up to the new stadium, the seven-acre development dubbed Texas Live includes 100,000 square feet of restaurant, bar and retail space, 35,000 square feet of convention space and a 300-bed, high-rise luxury hotel. It’ll also host big concerts via its 5,000-capacity event pavilion to be called Arlington Backyard, much like the ones planned for the second weekend of August as part of the facility’s grand opening festivities.

On Thursday, August 9, Toadies will play a free VIP concert at the venue, although you can sign up to win some tickets here. On Friday, Bleachers and Joywave will play a show that’s also free and open to the general public. On Saturday, Kip Moore does the same.

More info on these shows and the venue itself can be found here.

Sports and music always make for a fun combo. That goes double for so-called sports entertainment a la the WWE. I mean, just watch how the fans at Post Malone’s recent Austin show reacted when hometown hero The Undertaker came onstage to break some guitars. What we’re even more envious of, though, is the prerecorded backstage segment (which you can find at that same link above) where Posty gets chokeslammed to hell.

The Grapevine native is living his best life, and we’re here for it.

Same goes for Kacey Musgraves, who is currently wrecking it opening for Harry Styles’ arena tour. Word recently came down that her major label debut, 2012’s Same Trailer Different Park has been certified gold, selling over 500,000 copies. Two of the albums singles — “Merry Go Round” and “Follow Your Arrow” — have also been certified platinum (a million sales) and gold, respectively.

What’s more? Kacey also earned a spot on Rolling Stone’s list of the best country albums of 2018 so far. And, hey, Charley Crockett’s Lonesome as a Shadow also made that list!

Soon, acts like Crockett will have a new place to play in North Texas. Or, rather, a new old place to play. The 120-year-old Smirl Chapel was set for demolition by the First Baptist Church in its hometown of Heath, but it has now been spared by a new restoration project that intends to cut the old chapel in half, move it eight miles down the road to nearby Rockwall and restore it to its original look. It’ll share land with event space Summerfield at Tate Farms, whose owners say they’d like to see intimate concerts take place in the space down the road a la the Luck Reunion. If you’d like to donate to the project, which is currently trying to raise $300,000, hit the link above.

Moving on, it’s time to watch a bunch of new music videos. The first one comes from Emotional Xan, for his drug and gun anthem “Pressure.” It features a bunch of dudes holding Tommy guns, which are apparently way too easy for people to get in Trump’s America.

Next up, St. Vincent gets more mileage out of her “Fast Slow Disco,” – itself a reimagining of the MASSEDUCTION track “Slow Disco” – with a sweaty new video. Says the artist born Annie Clark: “I always felt this song could wear many different outfits and live many different lives. Here she is in disco pants, sweating on a New York dance floor.”

And, lastly, there’s Dark Rooms, whose frontman Daniel Hart knows a thing or 20 about films. The noted soundtrack composer’s own music videos are just as cinematic as his day job’s, as evidenced by this steampunk Ben Franklin science fair project meets tragic romance that could easily be stretched into a feature link indie flick if it wanted thanks to the effort of Dallas director Rob Martinez. We’d watch that movie!

When not starring in the above video, Dallas DJ Christy Ray has also been making news at the center of a new controversy in the Deep Ellum scene. Per a new D Magazine piece, Ray and fellow DJ Ursa Minor are no longer working with Independent Bar & Kitchen thanks to a new “no trap music” policy the owners of that venue and others in Deep Ellum (read: Club Dada and Off The Record) instituted after a number of violent incidents took place that management viewed as occurring due to the music genres its DJs were selecting.

Cover photo via Texas Live. Got a tip for White Noise? Email us!