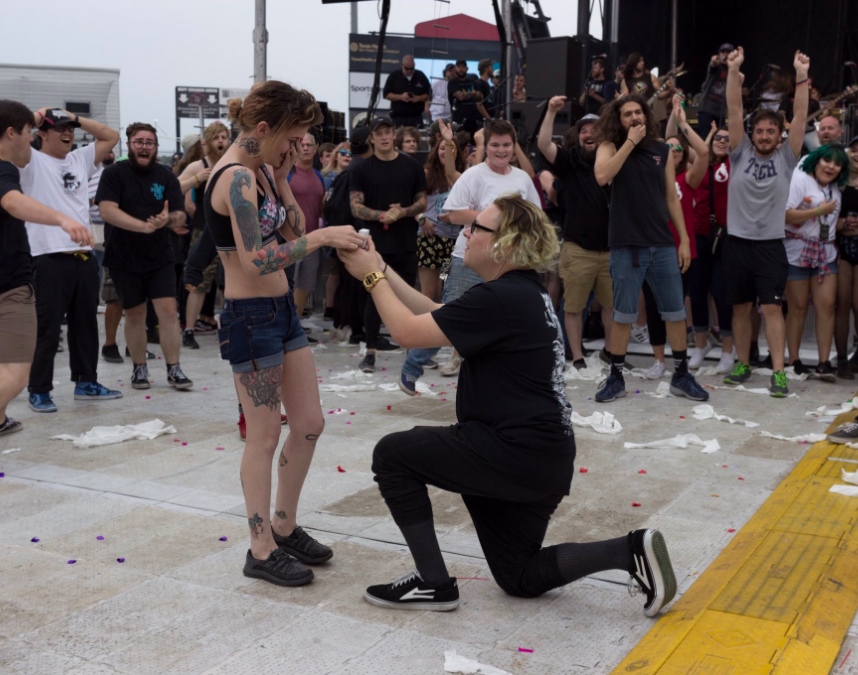 Irving’s New 8,000-Capacity Venue Opens This Fall, A Man Proposes In The Power Trip Pit and Record Stores All Over Town Gear Up For The 10th Annual Record Store Day.

It’s been teased since early 2014, but that 8,000-capacity venue in Irving called The Pavilion at Irving Music Factory is finally opening this fall. And it’s doing so in style, with some big-name bookings filling up its early calendar.

Popping the venue’s cherry on September 1 will be Dave Chappelle, while country superstar Brad Paisley will noodle away on his paisley Telecaster the next night. Closing out opening weekend is a Jeff Foxworthy, Larry the Cable Guy, Eddie Money, Marshall Tucker Band southern extravaganza. Other notable early-going bookings include Young the Giant and Trevor Noah. Tickets to all of those shows and more will go on sale this Friday, March 31, through Ticketmaster.

Also on the horizon is the 10th annual Record Store Day, which goes down Saturday, April 22. We’re not sure where official RSD Ambassador St. Vincent will be celebrating and/or performing, but we do know what’s up at a number of spots around town.

At Good Records (which will also be using the occasion to mark its 17th anniversary) there will be performances from Pretties For You (a band that features original Alice Cooper band member Dennis Dunaway), Plandroid, Medicine Man Revival, Cure For Paranoia, The Texas Gentlemen, Siamese, Motorcade, Squarewheel, MC 900 Ft. Jesus, Rodney Crowell, Dead Mockingbirds, Jason Eady, Drawer Devils and Charley Crockett on the vaunted Astro-Turf stage, along with DJ sets from Erykah Badu and several other notables throughout the day.

Not to be left out, Fort Worth’s Doc’s Records is offering sets from Movie the Band, Beach Priest, Steve Gnash, High Art and Heater, in addition to a 20 percent discount on merchandise.

Meanwhile, over at Josey Records, they haven’t announced any in-store performers just yet, but they have put out word they’ll be pressing up a special Astronautalis album featuring tracks recorded during his formative years in Texas.

Other special RSD limited releases of local interest include two unreleased b-sides from the Old 97’s’ latest LP pressed on opaque white wax and etched with the band’s logo on the b-side. Also, the first 750 people to pick up BNQT’s debut on that Saturday will nab exclusive white vinyl copies. And both Townes Van Zandt and Stevie Ray Vaughan will reissue live albums, too.

Speaking about buzzed-about new releases, Drake‘s new “playlist” features a song produced by Dallas super-producer Symbolyc One, who has already worked with the likes of Kanye West, Jay-Z, Beyonce, Eminem, 50 Cent and pretty much evey other big name in pop and hip-hop. His contribution, which was made in tandem with South Carolina-based producer Supah Mario, comes in the form of the release’s Young Thug-featuring penultimate track, called “Ice Melts.” Check it out below.

As far as more local album releases go, there are a whole bunch of dates that should be on your radar. Here’s a quick rundown of record release shows on the horizon:

Sticking on the record front, Bucks Burnett, who once ran an 8-track museum in Deep Ellum, will announce that he’s opening “a records and cassette museum” somewhere in Dallas this Saturday at noon. Really, that’s all he’s saying at this point. Stay tuned, we suppose!

Moving on, Corner Suns released a new video for its “The Rattle in the Room” single. It was shot at – where else?! – Good Records. Though it looks otherwise, the band’s John Dufilho says it was all one continuous live shot that’s just been put through some filters.

Another new video comes from Power Trip for their single “Executioner’s Tax (Swing of the Axe).” It features footage from a live show in Denton (because we all know how killer those are) intertwined with clips of fascist world leaders.

Speaking of cool things that happen at Power Trip shows, here are some pics tweeted from the band’s So What?! Music Festival show this weekend that capture a marriage proposal that went down mid-set in the pit.

Cover photo by Samantha Waldon. Got a tip for White Noise? Email us!