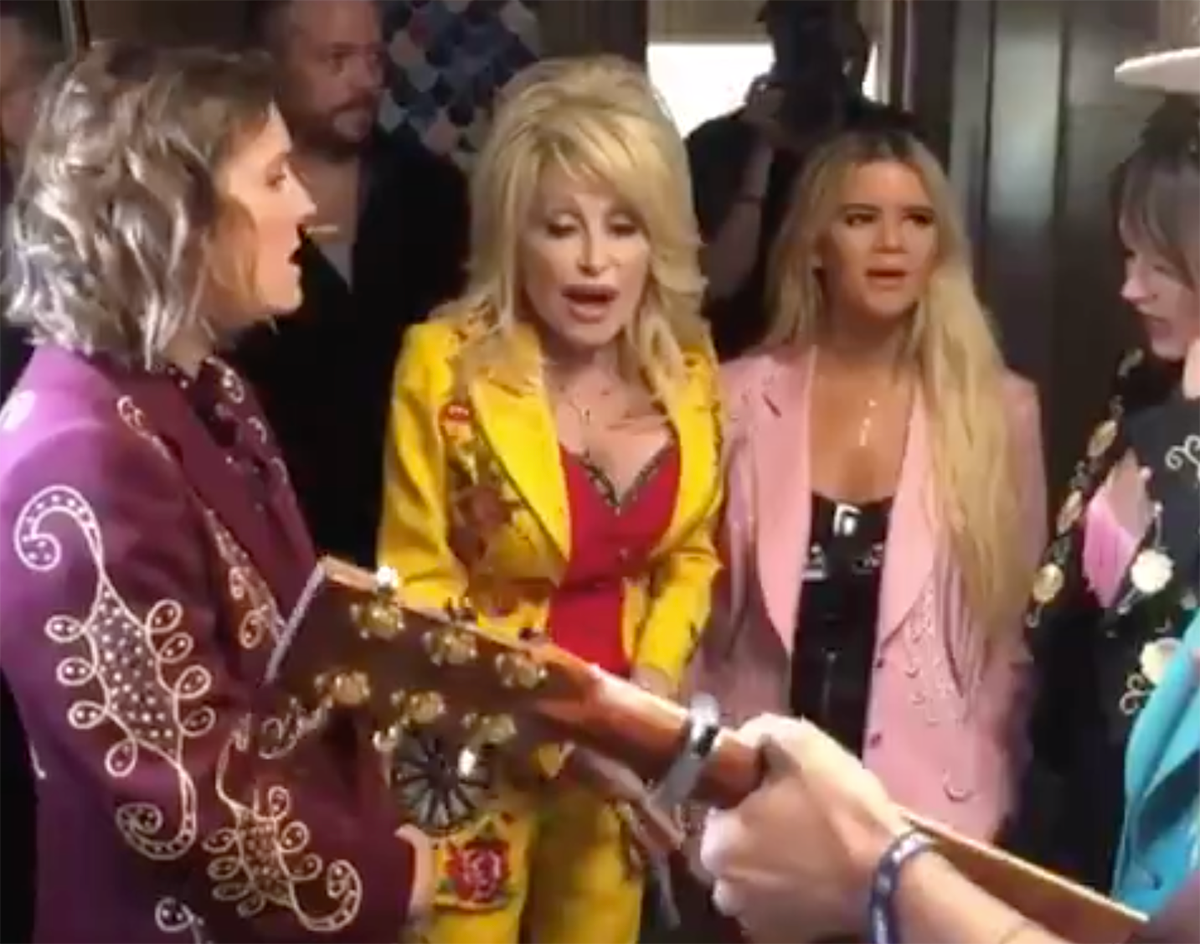 Sometimes, we think about Dolly Parton’s existence and just want to cry from happiness.

You never think icons can get any better than they already are, and yet, Dolly reminded us of her greatness by performing with the Highwomen (Maren Morris, Brandi Carlile, Amanda Shires and Natalie Hemby) at the Newport Folk Festival. A video of the two acts rehearsing Parton’s 1991 single “Eagle When She Flies” posted to twitter prior to the set has gone viral, because for this collaboration to get any less attention would be a cosmic injustice.

Take a minute to watch this magic…@DollyParton, @brandicarlile, @MarenMorris, and the High Women, singing “Eagle When She Flies.”

Morris being in such company is, to put it lightly, impressive. But, it’s not like she hasn’t already paid some dues and made a name for herself. On Monday, it was reported that her single “GIRL” reached No. 1 on the Billboard Country Airplay Chart, an achievement which Parton herself congratulated Morris for.

After selling majority stake to Live Nation last year, Texas-based ScoreMore Shows, best known for the production behind JMBLYA, is taking the festival beyond its Texas roots. An Arkansas version of the 2019 iteration is set for October 5, with a lineup including Juice Wrld, Playboi Carti, DaBaby and more.

Speaking of Texas roots, legendary Denton band Baptist Generals announced its celebration of 20 years in the game with a quick tour through Austin and Dallas, before finishing the party at home with fellow Dentonites Claire Morales and Poor Bastard Sons at Dan’s Silverleaf.

The releases don’t stop there, either. Emotional Indulgence (formerly known as Ethereal and the Queer Show) dropped its new video for the track “Chrysalis”:

Bryce Avary himself, AKA The Rocket Summer, also dropped a new video on Thursday for his new single “Blankets”:

Another artist to drop new music this week is Dallas-raised blues rock musician and your uncle’s favorite guitarist, Steve Miller. If it comes as any surprise to you that he has more songs than just “The Joker,” look no further than the preview of these four new tracks that he dropped on Friday:

But let’s be real – almost none of you are baby boomers. Some of you are indie-loving millennials and K-pop stans. If you fall into the latter category, you’ll be pleased to know that Irving-based hip-hop duo Play-N-Skillz engaged in a rather unanticipated, albeit welcome collaboration with VAV on the song “Give Me More”: