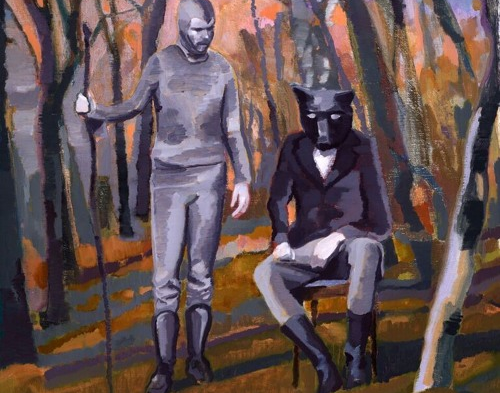 Midlake Gets Reissued, Grandmaster Flash Pays A Surprise Visit To Josey Records, And Local Music Docs To Look Out For.

Outside from its hometown in Denton, Midlake first hit it big after signing with indie Euro label Bella Union. Its first release for that label came in July of 2006 in the form of the band’s sophomore effort, The Trials of Van Occupanther. Simple math tells us that was more than a decade ago now!

To mark the occasion, Bella Union released a 10-year deluxe reissue of the album on vinyl this past Friday, featuring a pull-out poster, new cover art and a bonus seven-inch with two previously unreleased songs from the Tim Smith days.

Similarly feeling the pangs of nostalgia is the band’s Eric Pulido, who played guitar on Van Occupanther and assumed frontman duties a few years ago when Smith stepped away. He wrote a piece for the site The Line of Best Fit reminiscing about the good old days when the band all lived in the same house on Oak Street in Denton.

“Back then, our regiment was pretty consistent – wake up, work 9-5 at our respective jobs, come home and eat, record/rehearse ‘til midnight, go to the bar ‘til 2 a.m., sleep, repeat. We longed for the day we could quit our day jobs and extend the time spent recording and bar hopping. Back then I remember we would watch the clock for midnight like it was the school bell. There was alcohol and air hockey awaiting us down on Fry Street and by God we weren’t going to forsake them.”

Sounds like the makings of a good documentary! Oh, the band already has one? Right.

But Third String Productions’ string of So What?! Music Festivals don’t. Or, rather, they didn’t till just recently. Conveniently timed to coincide with the recent Deep Ellum-set So What?! Fall Edition is the below half-hour doc by Albert Gonzalez. It’s slick.

Also in the cutting room recently was a bunch of Dallas hip-hop producers (Sikwitit, B. Barber, Blue, The Misfit, Tha Kracken, Medasin, Dream Child, Keise On Da Track, Campion Bond, ReezyTunez, Clbrty, G Rose, Freddie Bruno and Scotch N Dough). They got together, making seven beats in 10 days while filming the effort, to give viewers an inside look at their process. It’s been edited down to a cohesive film project which will screen at Alamo Drafthouse in The Cedars on November 13.

But if it was DJs you wanted to make a documentary about, Grandmaster Flash would definitely be at the top of your list of potential talking heads. That much is evidenced by his surprised/unannounced appearance at Josey Records over the weekend. There, he was more than obliged to give Dallas DJ Bryan Coonrod an impromptu history lesson, which he had the foresight to film on his phone.

Yet another North Texan fit for the documentary treatment is Kirk Franklin, who not only warranted a lengthy, interactive cover story on MTV News’s site, but a mini-doc from their team as well. As expected, he speaks at length about his work on Kanye’s Life of Pablo in both. Also appearing in video form this week is Paul Cauthen, who appeared alongside an assortment of various Texas Gentlemen, doing a live in-studio take of “Hanging Out on the Line” from his recent My Gospel record at Dallas’ Modern Electric Sound Recorders. It was featured on Rolling Stone’s site this week. Fellow Texas Gent associate Kirby Brown, meanwhile, marked the release of the first of a trio of new EPs by premiering a new music video via American Songwriter. And Lou Charle$ commemorated the Mavericks’ 0-3 start to the season with his “Hall of Fame” video. The song itself, meanwhile, was produced by J. Rhodes. Lastly on the music video front this week, check out “Horror Scope” from Honor System. It’s directed by Matthew P. Rojas, and it’s a stunner. Moving on, the second annual Off the Rails festival announced its 2017 lineup this week. Headliners for the May 6-7, Toyota Stadium-set affair include Miranda Lambert, Justin Moore, Jason Aldean and Dierks Bentley among others. Passes go on sale this Friday, November 4 at 10 a.m. So, um, giddy up.