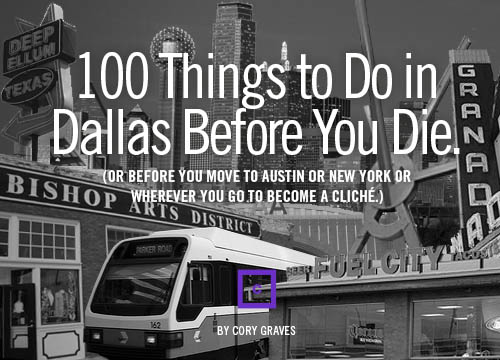 Anyway, that preamble is all to say that we’re almost done with these look-back-on-the-year-that-was pieces, promise.

Before we fully put the nail in that coffin, though, we wanted to share this retrospective, which looks back on our most well-read stories of 2012. They’re a pretty revealing lot, I’d say. Some of them are among the best pieces we’ve done. Others, well, we’re not entirely sure what made them so popular. But, fact is, these are what people came to our site to read the most in 2012. And thus, it can be argued, these are what our readers feel we do best here.

So, without any further set-up, here they are, in descending order, our most popular stories of 2012.

10. 50 Free Dates. // Desperate For Dough? Delight Your Date In Dallas Without Dropping A Dime.
Who says dating in Dallas has to be expensive?

9. Hey, Girl. // You’d Look Really Good In One Of These Vintage Swimsuits.
An attractive model rocking some killer vintage swimsuits we found around town, shot by the great Steven Visneau? What’s not to like?

8. Shop It Like It’s Hot. // Dallas’ 10 Hottest Shop Guys and Gals.
Meet the attractive people around town who convince you to buy clothes you probably shouldn’t.

7. Hello Old Friend. // A First-Hand Review of the New Myspace.
Our go-to tech writer, Rondo Estrello, randomly found himself among the first few people to receive an invite to try out the New Myspace, allowing his review of the social networking site’s revamp to beat much of the competition in the tech reporting world.

6. Hot Stuff. // The Street Style of Hot Wet Mess.
Tough to say why this story outperformed so many similar stories we ran in 2012. Perhaps because of its emphasis on co-eds? The fact that these style shots featured people looking more messy than hot? We still don’t know.

4. A New Sensation. // We Found The Overly Attached Girlfriend. She’s A Sophomore At UNT.
In which we authentic journalistic methods to reveal the trivial and unveil the identity of the person behind perhaps the most popular North Texas-centric meme of all time.

3. Cheap Eats Cheat Sheet. // Where To Find Half-Priced Food Deals In Dallas.
Why pay full price when you can pay half? Also, you can expect a new, fully updated one of these from us in the very near future.

2. Cheers! // The 10 Hottest Bartenders in Dallas.
They look even better when you’re drunk, though.

1. 100 Things To Do In Dallas Before You Die. // (Or Before You Move To Austin Or New York Or Wherever You Go To Become A Cliche.)
Easily our most popular post of 2012 (and unlikely to be seated as our most popular post of all-time at any point in the future) this post saw multiple readership spikes over the course of the year thanks to it constantly ebing shared across social platforms. First it blew up on Facebook, then on Twitter, then on Pinterest, then on Twitter again, then on Pinterest one more time and then like three more times on Facebook. Maybe the 101st to do in Dallas before you die is “Stop messing around on social media as much and leave the computer alone for a second, gosh.”