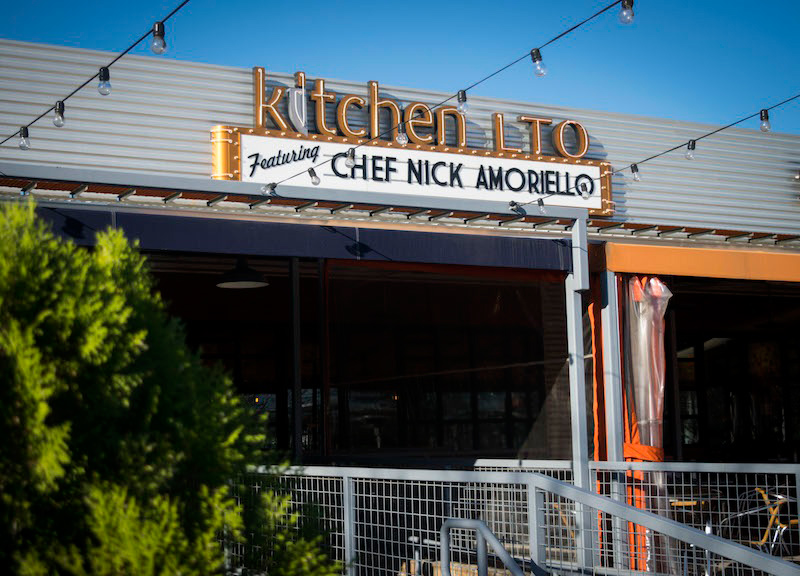 In Which We Determine How The Hell Permanent Trinity Groves Pop-Up Restaurant Kitchen LTO Works.

Nick Amoriello puts down his knives and walks out to greet his very first customers. He grins from ear to ear as the customers wipe away from the corners of their mouths the meal he has prepared for them.

Slowly, more customers begin to trickle in. These curiosity seekers have gotten the news that a new chef has arrived at Kitchen LTO.

LTO, you see, stands for Limited Time Only and Amoriello is the sixth chef to take the reins at this popular permanent pop-up restaurant in Trinity Groves. He replaces Anastacia Quiñones, who for sixth months dished out some of the best modern Mexican cuisine in Dallas in this same spot as part of menu that included some delicious crab stuffed enchiladas that are now nowhere to be found unless and until she goes on to open her own place, fingers crossed.

That’s LTO and Trinity Groves’ restaurant-incubator concept in a nutshell. Once you get to know and love a chef’s cuisine is when the tablecloth is pulled right from under your plate.

Literally, everything changes at LTO once a new chef takes over — from the silverware to the table decor to the servers’ uniforms. The paintings on the wall are even traded out as, with Crimson Shults’ work going out and Sara Reiss coming in to take over for version 6.0 of the restaurant.

All of this shifting, redesigning and constant rotation would be maddening for some restaurant owners. But not Casie Caldwell. She embraces change. It’s her role to be the glue holding things together here.

A photo posted by Dallas Drinking Society (@dallasdrinkingsociety) on Mar 5, 2016 at 3:58pm PST

“It’s always evolving,” Caldwell says. “I think my job is refining that process and making that transition smooth. I give my people the tools that they need to get their job done. If I’m not doing that. then I’m not doing my job.”

The only facets of the restaurant that remain static from set-up to set-up are the general staff, from both the front and the back of the house. Among those staffers is Jason Parsons, LTO’s first and only bartender, who prepares the drink and cocktail menu for each version. He says his job is to find the right drinks for the right food, but most importantly keep the menu seasonal. Parsons says Amorellio’s regional and rustic comfort cuisine calls for some drinks like a Honeysuckle Shandy, which he crafted to be paired with the chef’s Buffalo Fried Quail.

Rustic is perhaps not the right term for Amorellio’s cooking. His dishes are neither clumsy nor bulky. They are carefully prepared works of edible art, the result of skills he’s honed for nearly 20 years. Amoriello is 32 years old, but he’s been cooking in restaurants since he was 15. A position like this one — which he won as part of an open-call competition — has been a long time coming, but he says he’s glad to take on an executive chef position at this age rather than when he was fresh out of culinary school.

“There was a time when I was 22 or 23 and I was like, ‘You know what, man? I could totally do a restaurant right now! I got this!'” he says. “I’m so glad that did not happen, because it probably would have burned to the ground, literally.”

A father of two daughters, Amorellio understands the stressful pressure he is under to perform at a high level. Without that awareness, he may not have been chosen as a finalist for LTO 6.0, as the contestants’ ability to handle stress is one of the major qualities for which Caldwell is looking.

“We’re looking for people that obviously have the culinary skills and skill level to teach and to maintain a busy kitchen on a Friday and Saturday night,” Caldwell says. “Also, do they have the personality to be able to come out and talk to the guests? And then, of course, there’s also the factor of: how are you going to treat our staff? How are they treating the lead cook? How are they treating the dishwasher? You get a pretty good vibe as to whether or not you’re going to be able to work with this person for six months.”

@kitchenlto 6.0 opens tomorrow and this buffalo fried quail with blue cheese slaw is on my list! ðŸ–

After this careful scrutiny of the contestants, Caldwell and her restaurant partners are confident that one of their five named finalists for each round will find success. That’s then when the general public gets a turn to cast its vote. At that point, contestants are thronged into a frantic tasting audition where up to 350 patrons have the opportunity to taste the chef’s favorite dishes. Additionally, the chefs are given a chance to appeal to voters online, on radio or surely by skywriting if they felt so inclined. After a week of public voting, the winning chef is announced. Three weeks later, he or she is in the kitchen, slinging their new menu concept to the populace. (Amorellio was fortunate enough to have a group of supportive colleagues from his former restaurant-home at Rapscallion run his social media campaign.)

So far, the public’s chosen wisely. Each of the first five chefs at LTO have gone on to reach a certain degree of success. Inaugural chef Norman Grimm went on to become executive chef at Souk and currently has been given the keys to a new steakhouse called The Trophy Ranch. After him was chef Eric Shelton, whose fresh and delicate cuisine had Café Momentum clamoring for his expertise before he moved into the role of head chef at Salina Country Club. Brooke Egger, who won the third LTO contest, later held the position of “jelly princess” at The Jelly Queens, an organic artisan jam and jelly company based in Dallas.

The most successful chef to rise out of the fires of LTO, though, is Blythe Beck. During a time when Caldwell rotated the chefs every four months, Beck — already something of a known entity thanks to her time on TV — was given an extra stay at LTO amounting to a total of eight months thanks to her strong sales. Beck’s run actually changed the game here some: Now, each LTO chef is given a six-month stay instead of four — a change that Caldwell says helps each chef to hit their stride, and for the patrons to really embrace the new menu. It was such a strong stint, in fact, that Caldwell has come on as a partner at Beck’s new Pink Magnolia spot in Bishop Arts.

Such a success is what Caldwell hopes for all of her chefs.

“She kind of scouts out the talent,” outgoing LTO chef Quiñones says about Caldwell’s veracity as a recruiter for chefs in her restaurant. “When she finds you, she will not stop until she gets you to do it. She will make sure she gets you in here to do a tasting, to do the competition. But, you know, she’s very supportive.”

Now is Amoriello’s time to hone his skills and soak in all of the nuances that come with existing as the new executive chef of a very popular restaurant, if only for six months. As he peeks into the dining room from his new home in the kitchen, he has a look of steely concentration. When another ticket is rung in, he immediately turns to his cooks to lay out the game plan. In the blink of an eye, a beautiful pork belly dish appears in the kitchen window. Chef Amoriello calls over the service staff and explains to them the details of the dish. then claps his hands and sends off his troops with a smile that pushes through his enormous beard. The server charged with delivering this plate, wearing a brand new plaid shirt, zips across the dining room floor and delivers what LTO hopes will be just one of the first of many delicious dishes this new chef will direct.

For his part, Amoriello looks up to the task.

“I’m just at a point in my career where I’m very confident,” he says, “not just in my cooking skills but also my management skills.”