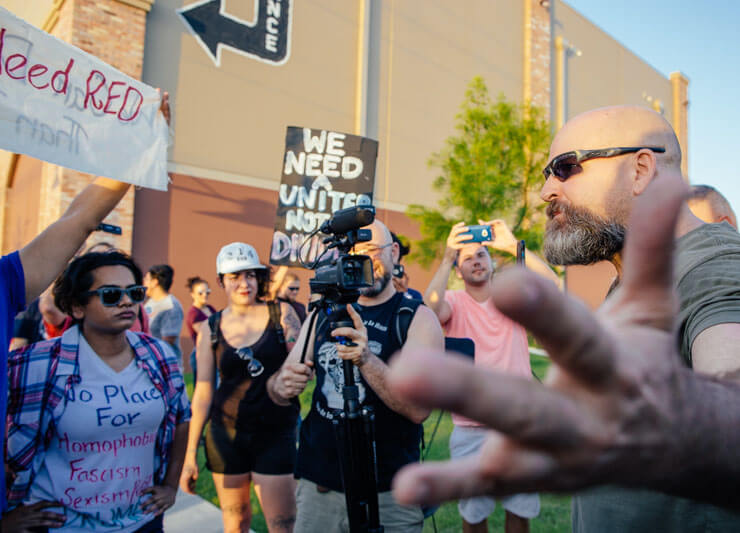 Two blocks away from Thursday evening’s scheduled Donald Trump presidential campaign and protests at the Gilley’s entertainment complex, a man was using a crosswalk to make his way across Lamar Street when, unexpectedly, he was struck by a white BMW 750 and knocked to the ground.

Mistakes happen, but there was some foul play here: The driver not only hit the pedestrian; she even slightly accelerated after the man yelled out. Immediately, onlookers raced over to help the man to his feet and over to the sidewalk, all while scolding the driver. Eventually, the man would limp away into the setting sun with his friends.

This incident was separate from the rally and protests taking place down the street, but would end up as one of the evening’s few actual out-of-hand moments. For the most part, the scene in this Dallas neighborhood known as The Cedars on this evening was surprisingly orderly. Outside of Gilley’s, a colorful mesh of American flags, rainbow shirts and various clothing articles reading “Make America Great Again” dominated the visuals.

The line to get into the rally itself extended into the venue’s back parking lot as protests were held across the parking lot, closer to Lamar Street. Led by local advocate Domingo Garcia, who helped organize their activity and urged people to remain peaceful throughout their demonstrations, protesters chanted “The people united will never be divided!” while carrying colorful and sometimes profane signs.

They were met with counter-protesters like Rick Ellis, who stood still among the raucous crowd and hoped to spread a more religious message with his giant, wooden cutout signs that read “Jesus Christ is Lord” and “All die then judgment.”

“I’m disgusted with all of it,” Ellis said. “I don’t think any of [these protesters] are worth anything. We’ve just slid off into the abyss and I don’t know if we’ll ever return. We’ve killed 60 million children since 1973, and there comes a time when you have to pay the fiddler. We need deep repentance and I don’t think that’s going to happen until we get spanked real good.”

Tensions between protesters a Trump hit a fever pitch as a lone supporter began to argue with a group of protesters only to elicit a “Fuck Trump!’ chant in response.

For a brief moment, the situation became physical as both sides exchanged quick shoves. Before things got too out of hand, though, Dallas police rushed in to remove the Trump supporter — much to the glee of the protesters, who sang Steam’s “Na Na Hey Hey Kiss Him Goodbye” as the man was escorted away.

Later, some blood was indeed spilled: As he covered the protests, Dallas photojournalist Danny Fulgencio was struck by a rock that was thrown into the crowd. After being cleaned and bandaged by a group of on-site paramedics, he would return to taking pictures of the event that had injured him.

Earlier this week, the Dallas Police Department performed riot drills at Fair Park to prepare for Trump’s rally and expected protests. On Thursday, the DPD presence was thick: Officers lined every sidewalk, ready to deal with unruly behavior. Aside from the aforementioned incidents, the evening’s activity would prove to boast more vitriolic bark than bite.

Lisa Foster was among the more vocal Trump supporters as she argued with the police who denied her entry into Gilley’s. When police determined that the 3,800-capacity room inside of the venue had reached its attendance limit, Foster was next in line to get in, with some 100 or so additional would-be rally attendees standing behind her.

“Why don’t you all step aside like you did when JFK was here?” yelled one of those excluded Trump supporters to the dismay of everyone around, including his peers.

According to the DPD Twitter account, only one arrest was made for disorderly conduct and seven people were escorted from the rally inside of the venue “for their safety.”

Hanna Flovin, Carter Ash and Madison Craft, who were among those escorted out of the rally, said they felt more in danger while inside the venue than out among the protests.

“The police carried me out by my arms,” Flovin said. “I sat down on the floor when they said they were coming to get us, and the police came and picked me up by my arms and drug me out.”

“It’s so tense in there,” added Ash. “[The Trump supporters] take one look at you and they look like they’re ready to fight you. If you don’t look like them they’ll kick you out.”

Nancy Honazales, who was also escorted from the rally, said she was removed for telling a venue security guard who had asked her who she was supporting in the election that her stance was neutral. When told she would still have to leave, she asked why.

She was upset at his reply.

Says Honazales: “They were just like, ‘You guys aren’t white.'” 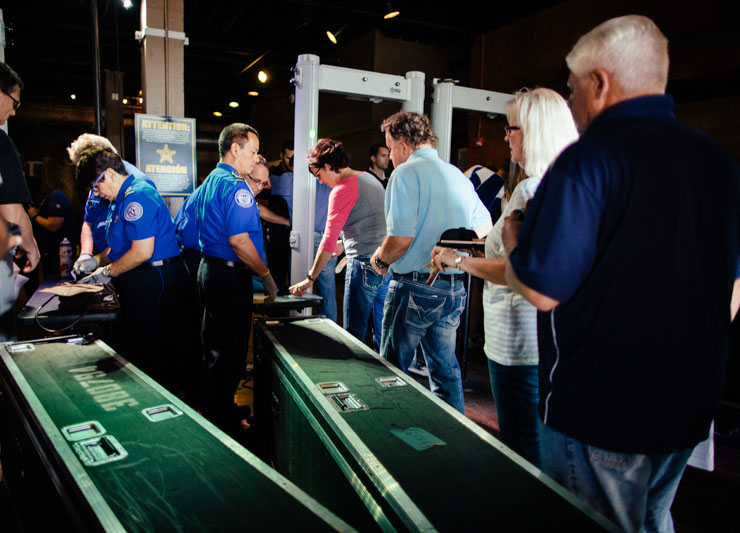 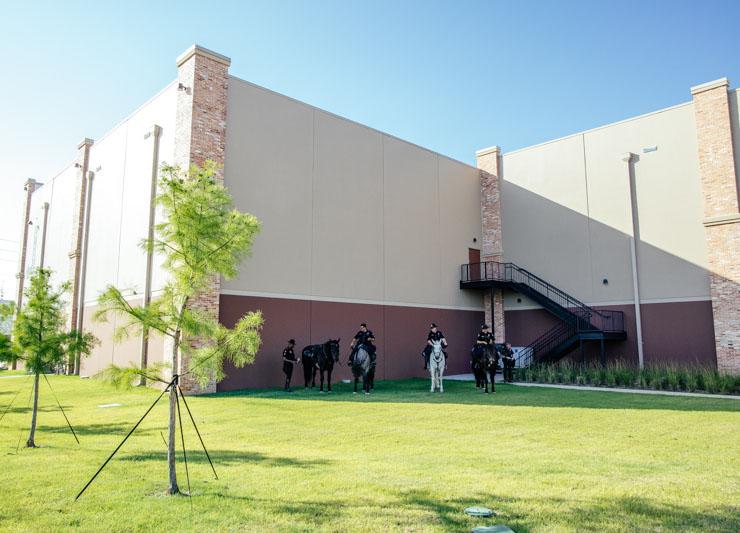 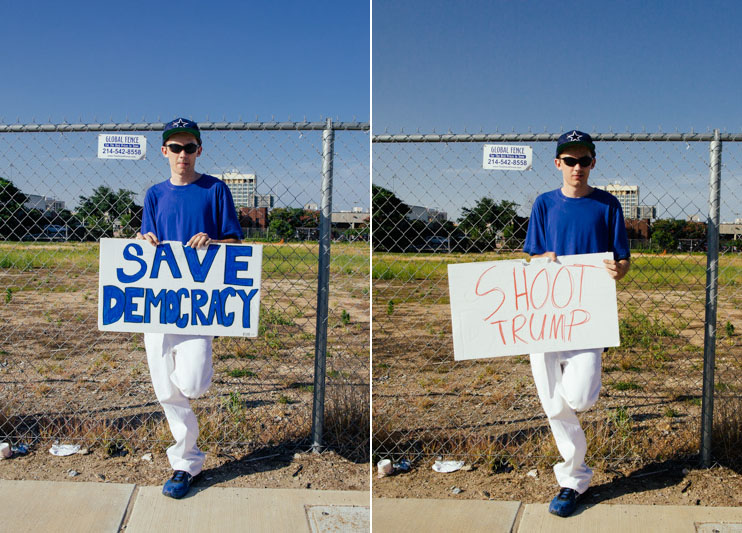 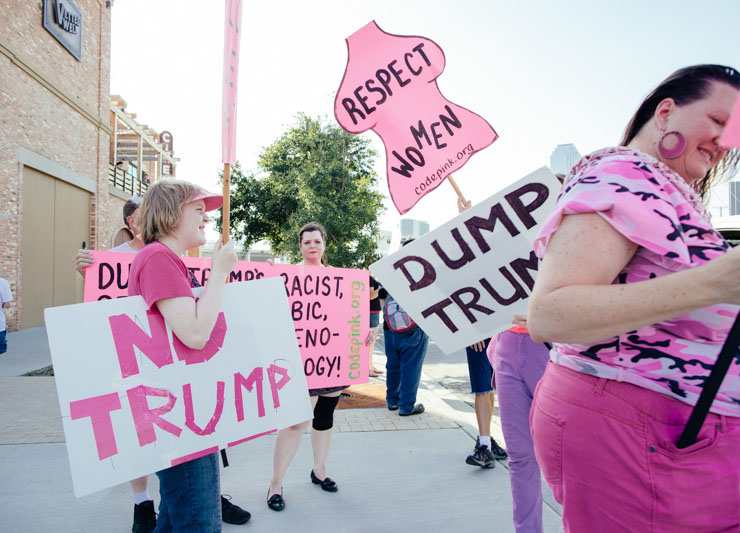 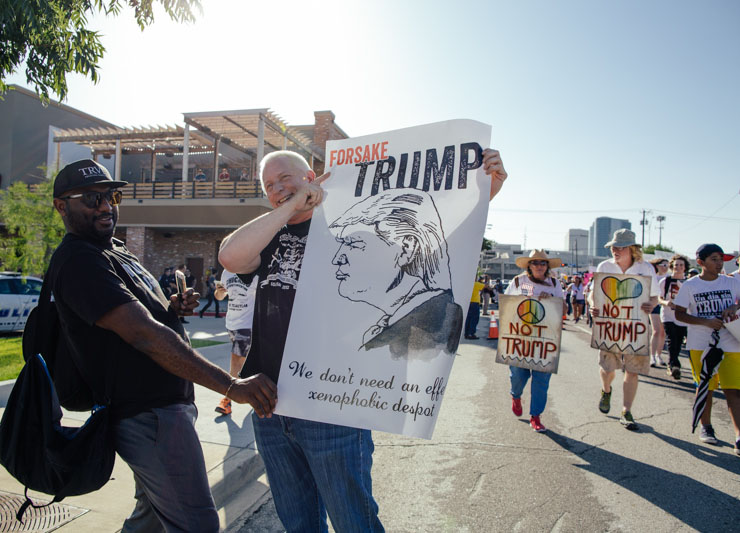 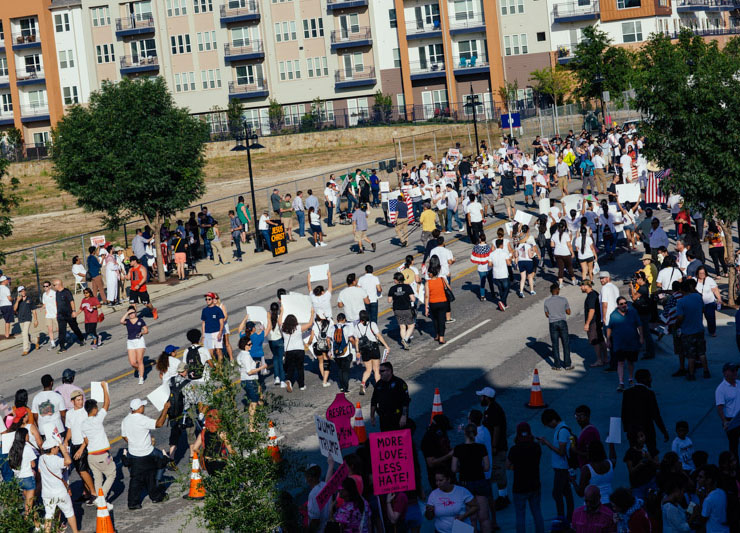 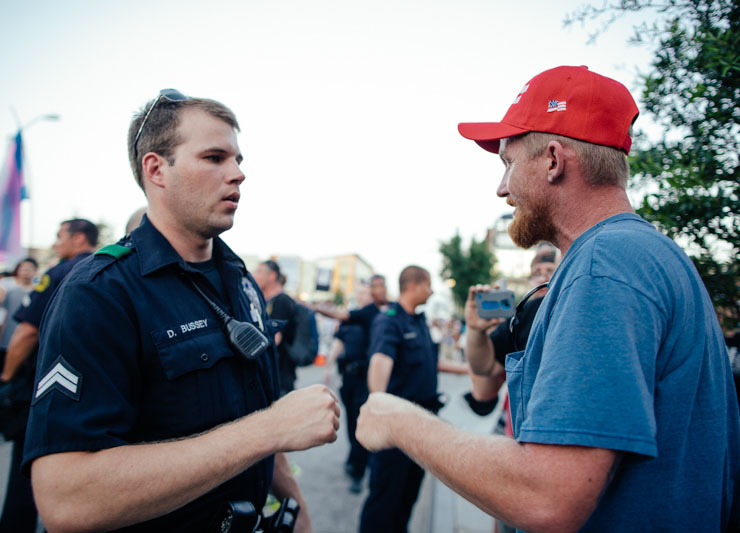 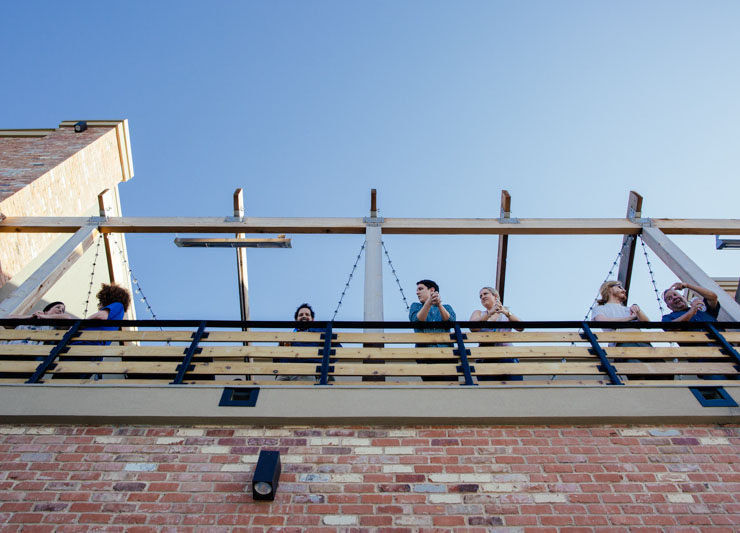 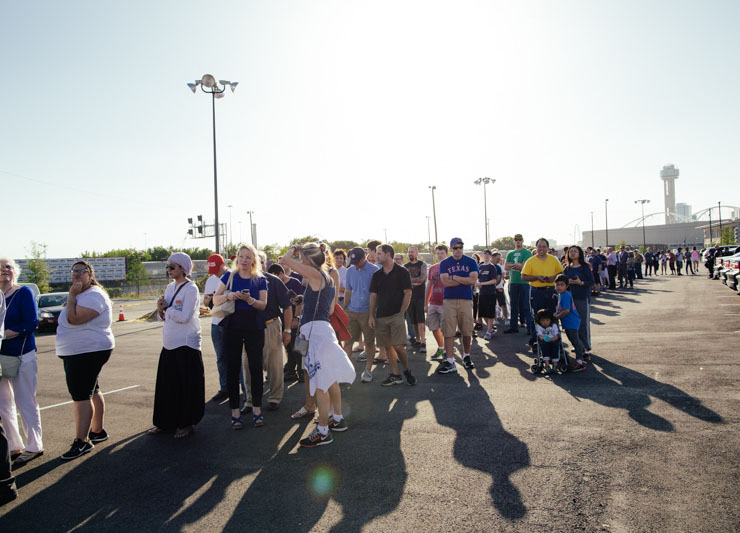 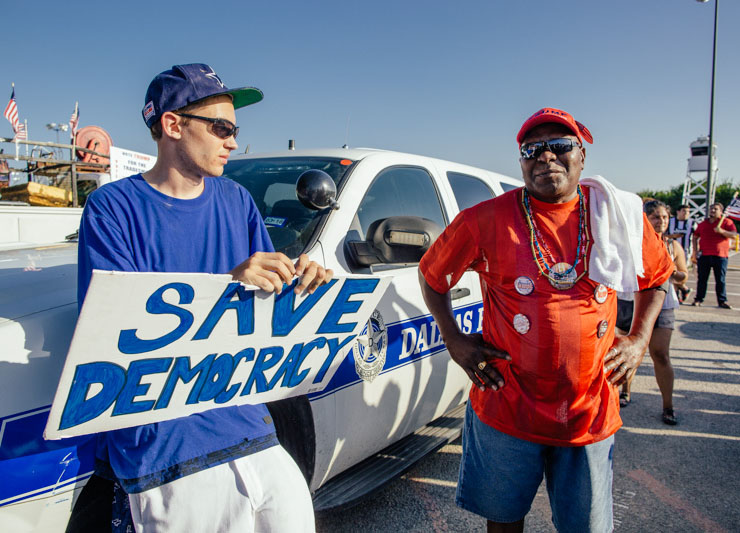 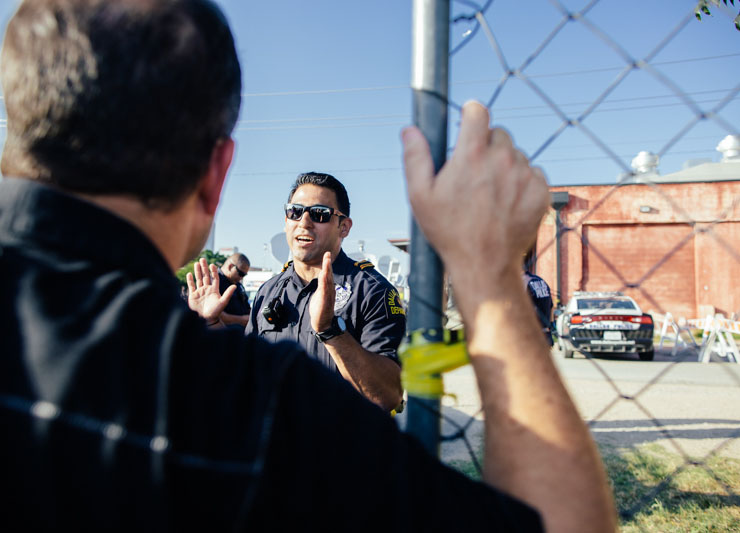 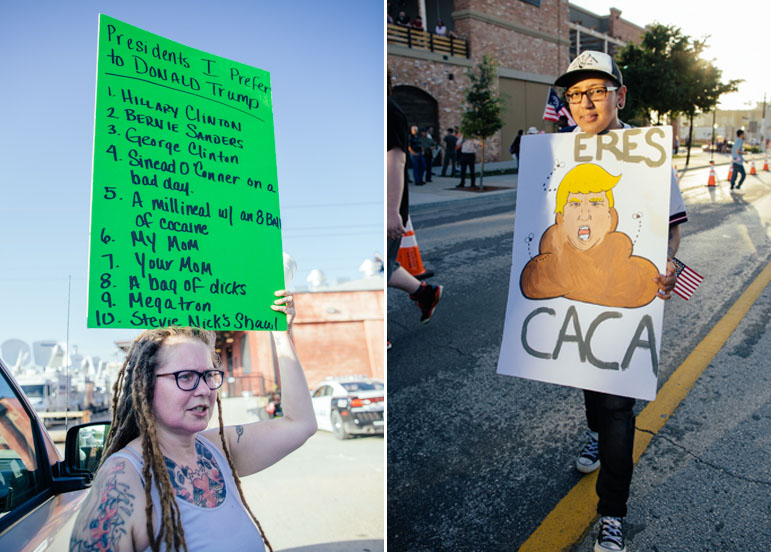 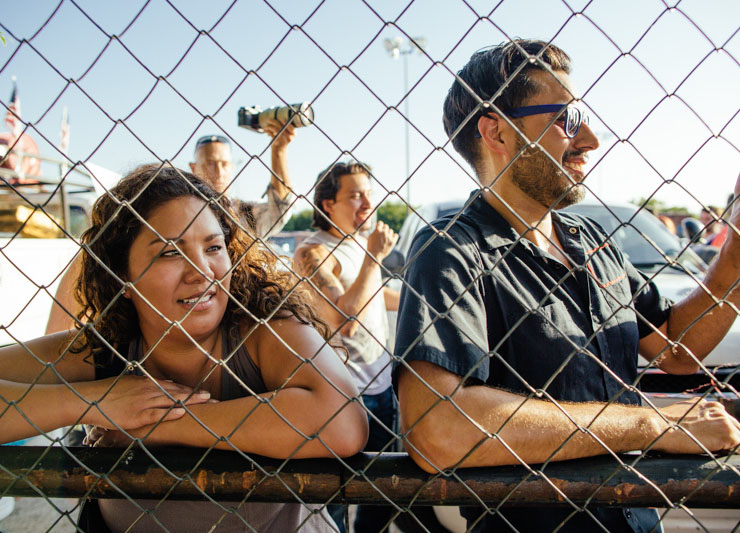 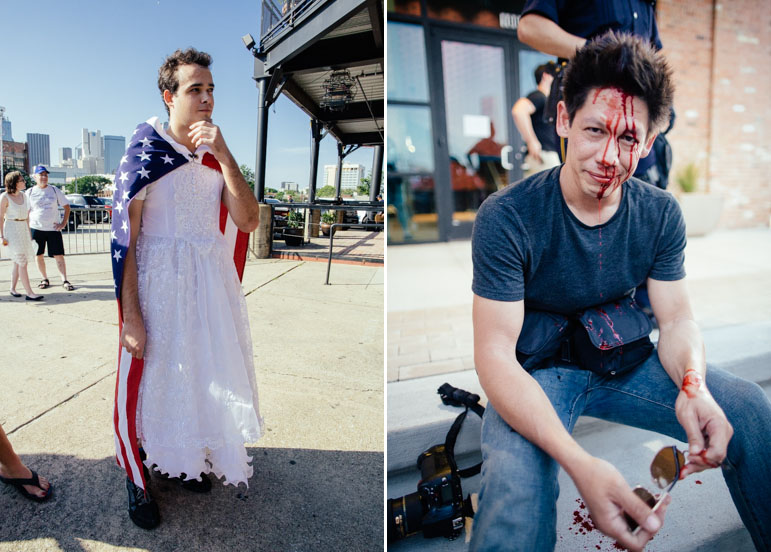 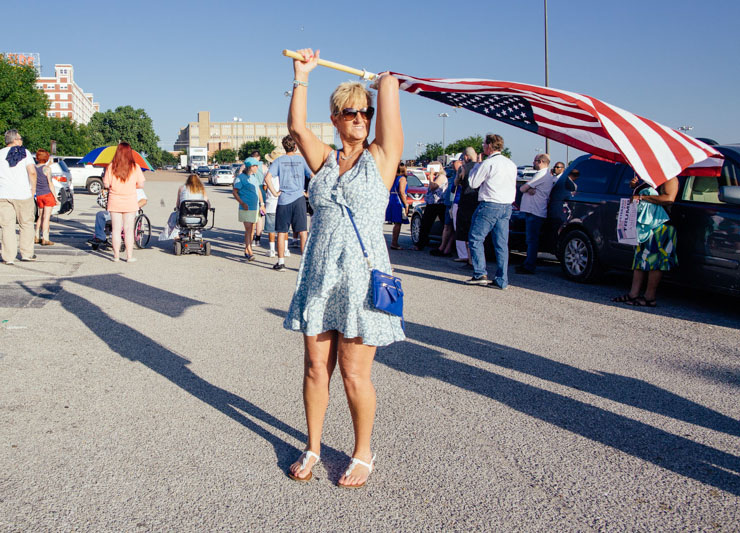 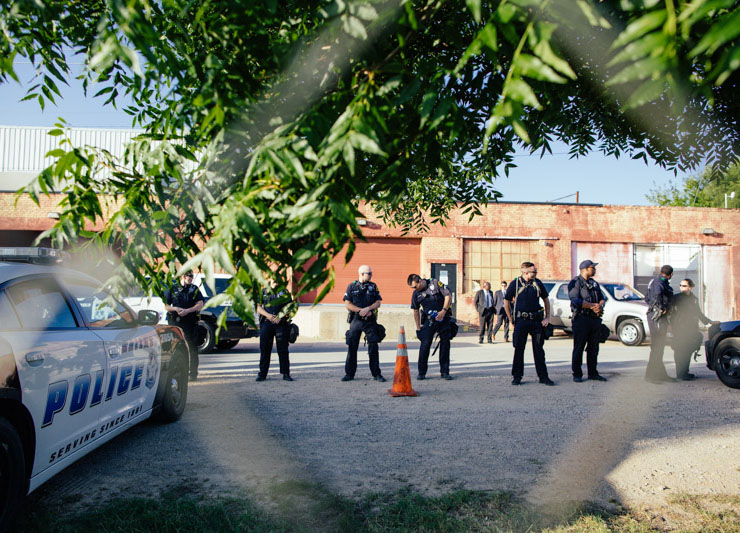 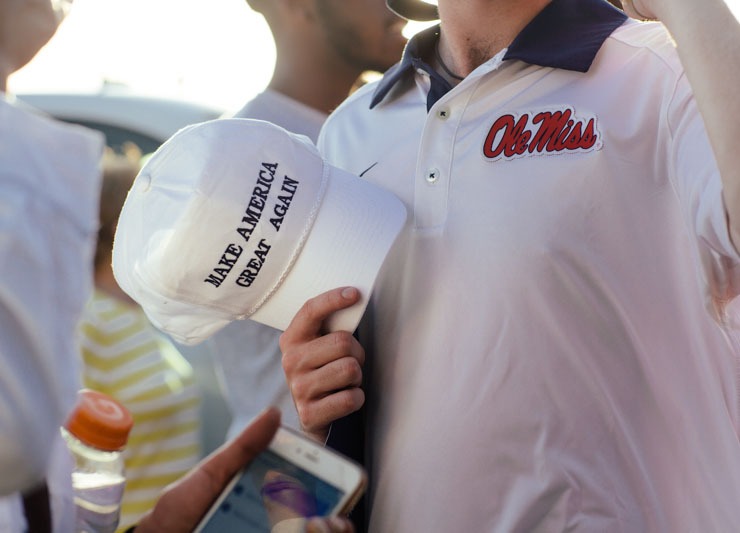 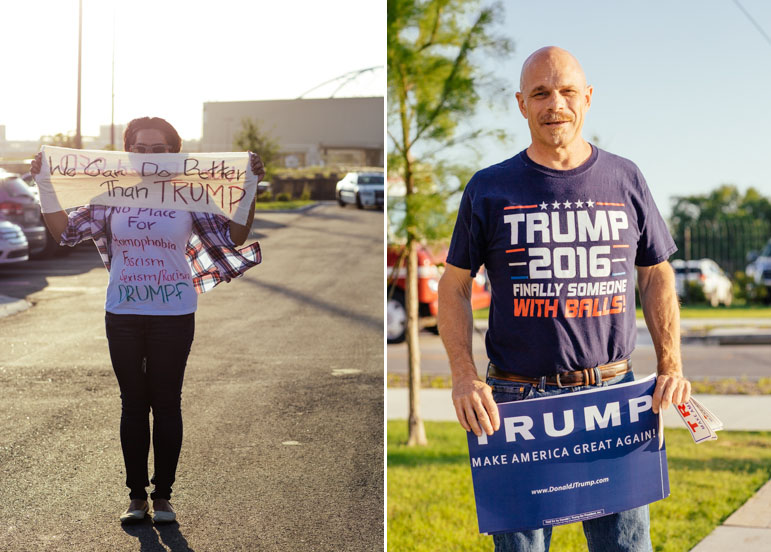 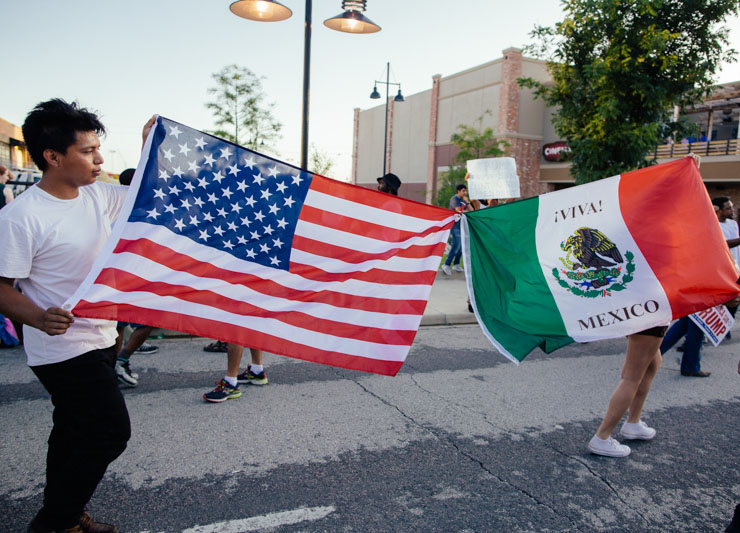 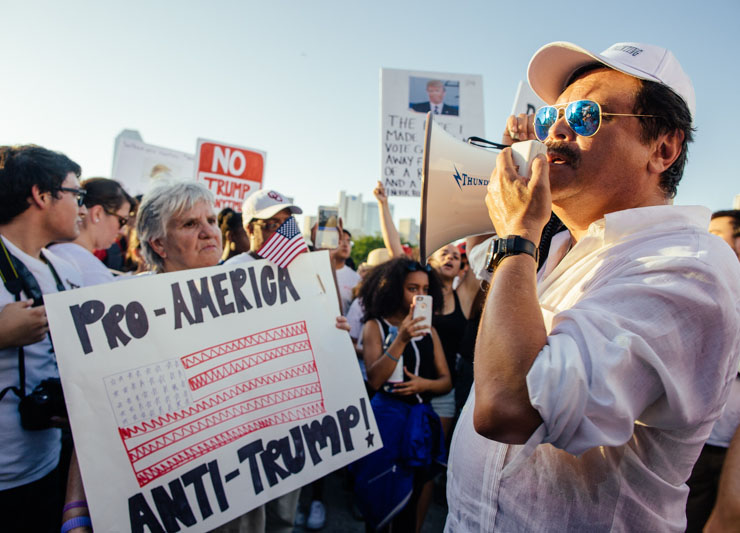 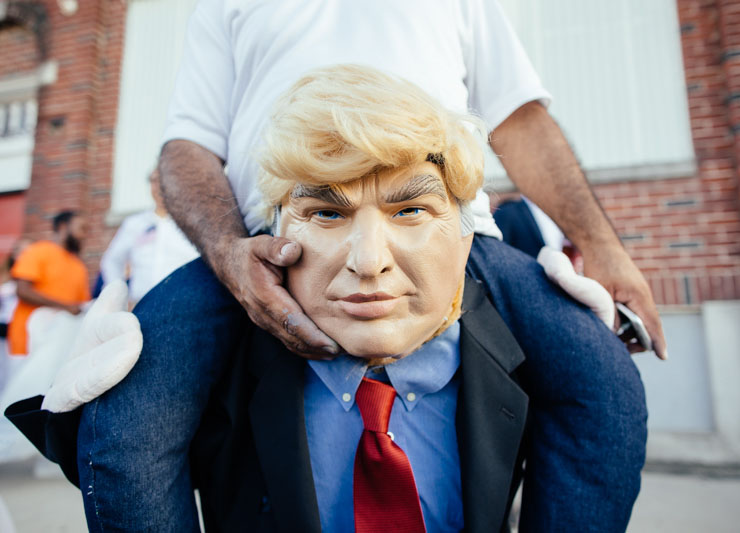 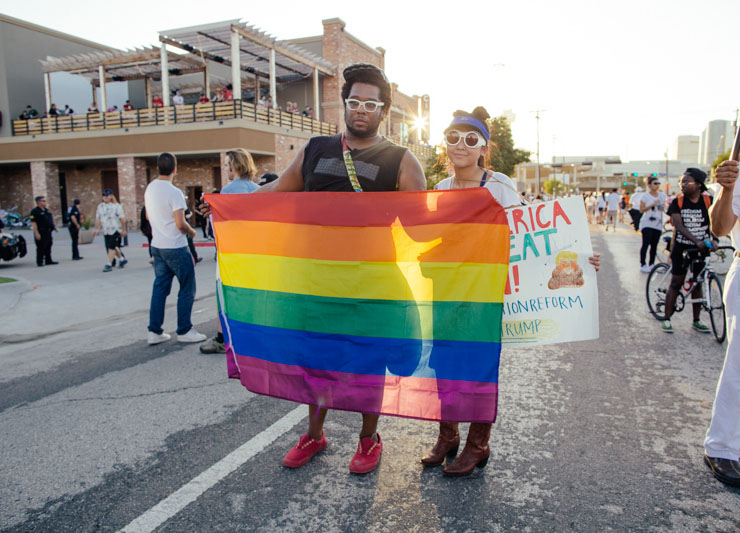 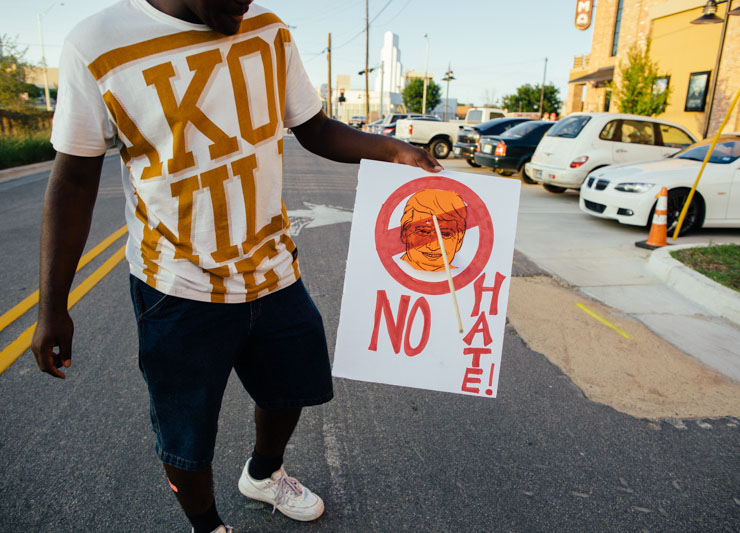 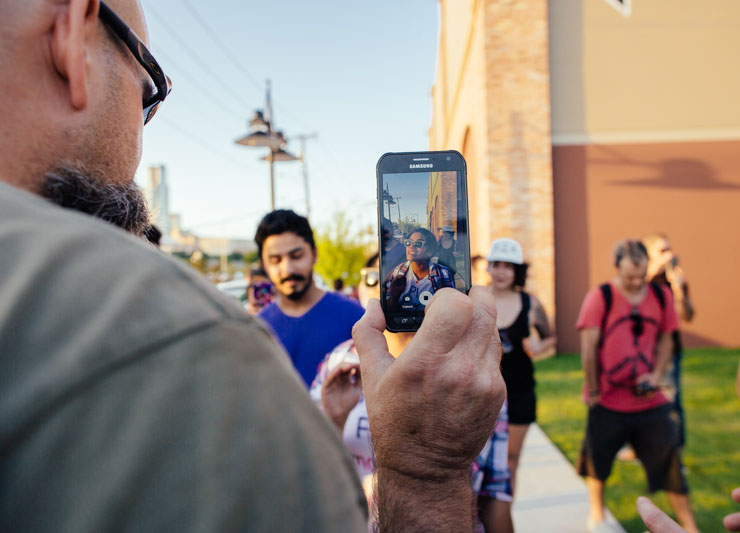 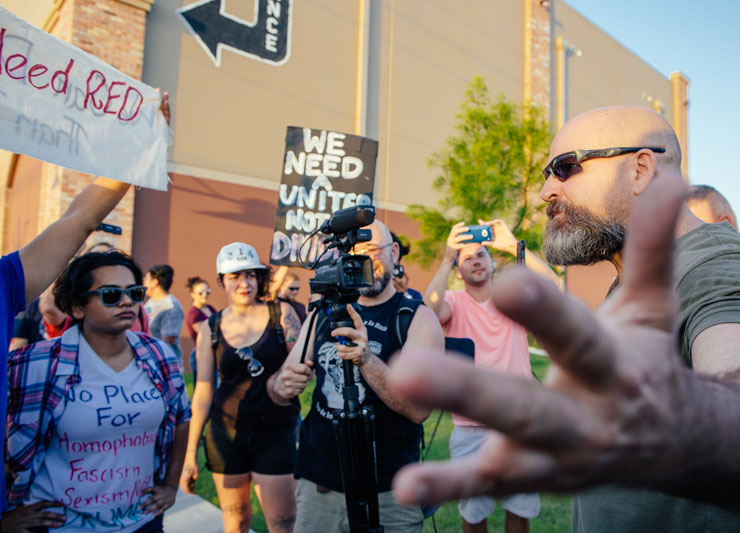 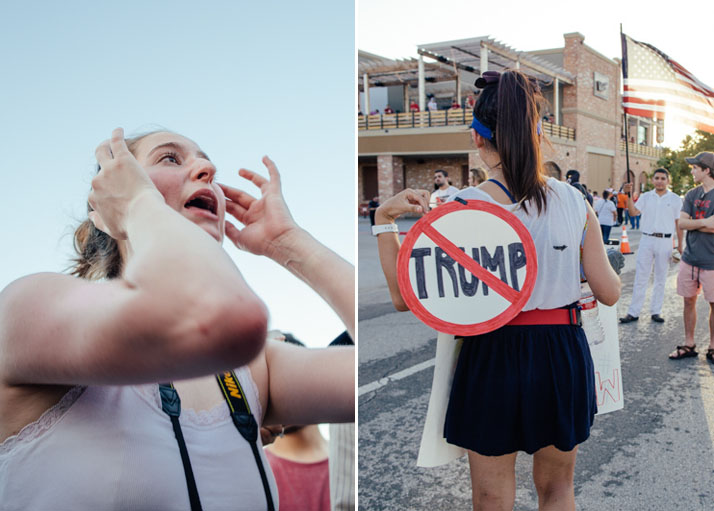 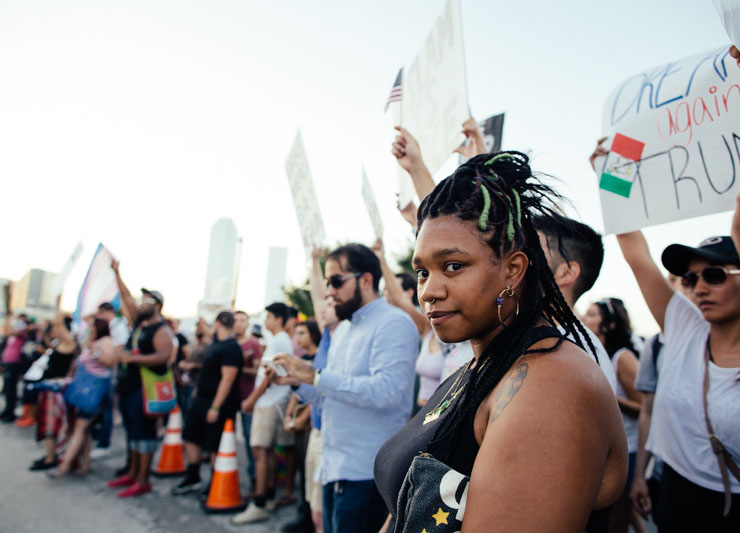 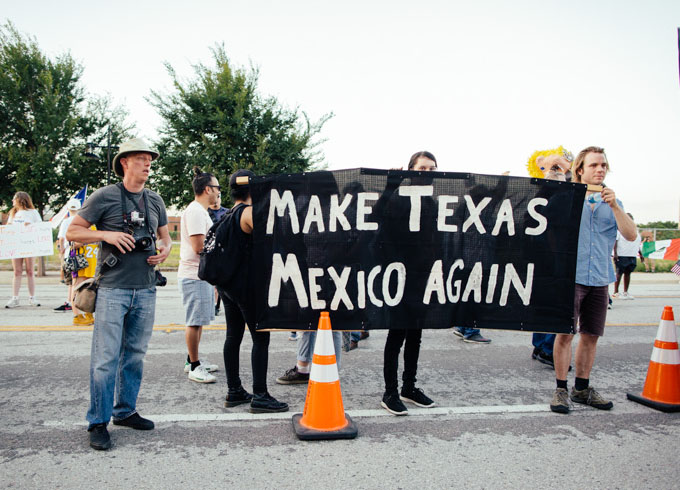 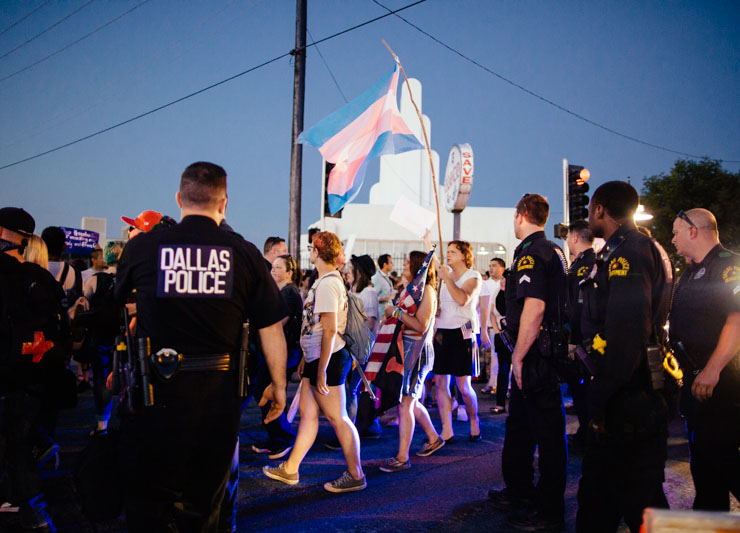