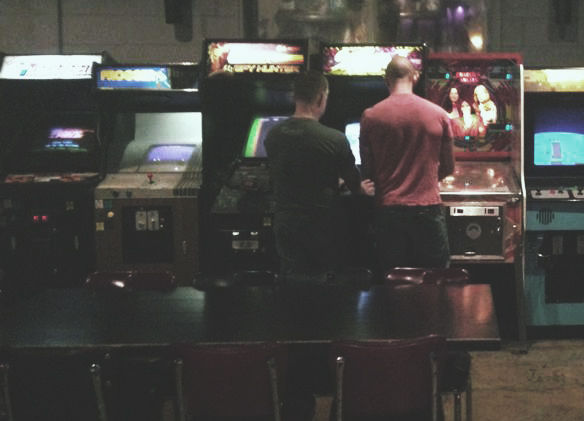 With Arcade Bars Thriving In Dallas, We Take A Look At The Best Spots Where You Can Get Your Game On.

Arcades already had their heyday in the early ’80s, back when Pac-Man, Galaga and Frogger were all the rage.

Then, with the advent of affordable console gaming, PC gaming, online multi-player gaing, and even Major League Gaming, the institution of the arcade kinda fell to the wayside as a nostalgic memory from a different time. Well, in America at least: Vestiges of that era’s former glory can still be found overseas in the mega-arcades of Japan and in small pockets of enthusiasts who still band together to preserve the history of the once-popular machines and the games of that time. But for the most part, much like Elvis and disco, the arcade has been effectively put to death.

Where did the industry that used to make almost $8 billion a year disappear to, though? Is there any place for people to relive the magic of their younger years in Dallas, or to even experience it for the first time?

Yes. In spades, even. Beyond your large-scale “adult Chuck E. Cheeses” of Main Event and Dave & Busters, each of which boasts several locations throughout the region, Dallas and its surrounding hamlets boast too a variety of local arcade bars.

These new homes of low-res quarter-munchers cater to adults by attempting to draw crowds with an alluring combination of booze and vintage arcade games.

And they’re pretty great, actually. Not counting the random bar that has an arcade game in this corner or that one here are the arcade-adoring spots worth knowing about.

The newest of these Dallas-area vanguards is Free Play Arcade, a venue that opened earlier this month in Richardson. Boasting over 60 vintage arcade games and pinball machines, as well as a large selection of craft beer and a food menu, the space hopes to attract an audience that’s hungry to relive the nostalgia and excitement that once existed many years ago. So far, the response has been something of an overwhelming task; already in its early run, this hot spot is struggling some to keep all of its vintage games in working order given the way the masses have been drunkenly button-mashing their way through the venue nightly. Still, the volume of the game makes up for that. And for a $10 cover charge — “Free Play” is a little misleading, it turns out — you can have unlimited access to all of the arcade games and pinball machines this place has to offer. Also, according to Free Play’s most recent Facebook posts, this place is only looking to procure more games for its collection. So keep your eyes peeled for that.

This award-winning Dallas institution has attracted thousands of arcade fans to the space during its lifetime, even spinning off a sister location in Fort Worth in the process. And though gaming may not necessarily be the main focus of this Henderson joint — food is a popular go-to here, as is heaving drinking — this place still boasts one of the largest collections of arcade games in the area. Better still: Tuesdays are free-play days where you can get your Space Invaders on from happy hour until closing time.

The Uptown location of this statewide chain has had some extremely negative press in the recent months and years for its discriminatory practices — but, credit where it’s due, it does house some great arcade games if you Can forgive and forget. Also, there are 24 beers on tap and a full, Asian-American fusion menu of eats to indulge in if your heart so desires.

Be forewarned: This is more of a family-oriented space. As such, there is no booze here, and you’re facing a high risk for annoying children’s birthday parties. But Nickelrama is still notable as an independent spot that hosts a large selection of games and classic pinball machines so you can get your retro kicks. If you don’t mind dodging kids hopped up on birthday cake, pizza and soda, this place offers up all of their arcade games for literally nickels. That’s right: All of that change rattling around in your car can be put to good use here. Eat your heart out, Coinstar.

Pinball.
Various locations.
Featured games: Pinball, a bunch of it.

Finally, if you find yourself absolutely needing to fill the void that only pinball can satisfy; you’re in luck! The good people at pinballmap.com/dfw have your back, having created an interactive map that tracks all of the known pinball machines that exist for your playing pleasure in various bars, restaurants and other venues from Decatur to Dallas. Not only can you find where there’s a pinball machine; they even go so far as to tell you the model and year of the machine. Talk about thorough. You can search all over the DFW area to find that perfect pinball machine to fit your mood. Whether you feel like getting your pinball wizard on with The Simpsons or KISS, this crew has you covered. Maybe you can even map out a pinball pub-crawl? That could be pretty awesome, actually…