Toadies’ Vaden Lewis Looks Back On 25 Years Of Rubberneck.

A Quarter-Century After Releasing One Of North Texas’ Most Iconic Albums, The Band’s Frontman Takes A Moment To Ponder Its Enduring Legacy.

It’s Sunday afternoon — two days after the Friday, August 23, date upon which his band’s debut LP officially turned 25 years old — when I catch up with Toadies frontman Vaden Lewis on the phone to talk about the latest milestone Rubberneck has surpassed. 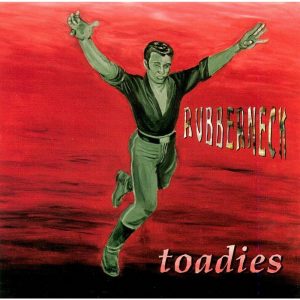 He’s at a friend’s house not too far from his own Fort Worth residence when he picks up his cell, just about to enjoy a summertime dip in the pool.

In other words? The latest achievement reached by his band’s most celebrated album — one of the truly iconic releases in North Texas music history, not to mention one of the most celebrated non-Seattle alternative rock albums of the early ’90s at large — hasn’t exactly consumed his entire being.

Well, not this time around, anyway.

Yeah, his band’s Facebook social media channels were sure to acknowledge the occasion — on Friday, those pages hosted video messages from studio types and radio DJs who were around during the album’s 1994 roll-out, plus a congratulations from Lewis’ hometown Fort Worth mayor Betsy Price — and the band will indeed embark on a short run of four 25th anniversary showcases across Texas in October, during which it will perform Rubberneck from front to back.

But the band hasn’t exactly been engaged in a major press campaign over this anniversary as it has for past ones. Maybe that’s because, just five years ago, the band toured a 20th anniversary Rubberneck retrospective all across the country. Or maybe it’s because, at this point, the band would prefer to answer questions beyond the same “Possum Kingdom”-, “Tyler”- and “Backslider”-related ones it’s been fielding for a full quarter-century now.

And who could blame them for that?

Still, it felt borderline sacrilegious to let Rubberneck‘s silver anniversary slip by without properly recognizing its near-unrivaled place near the top of the all-time North Texas music release heap, and Lewis was kind enough to indulge me a few pre-swim question on the matter, provided I was brief. Fair enough: Our call took place on yet another steamy Texas summer afternoon, and the soothing water from which Lewis comes was a-calling.

Here’s what he had to say.

So, arbitrary as these things may be, it’s tough not to look at the 25-year anniversary of Rubberneck’s release as a milestone of sorts — at least from my perspective as someone who has spent the last decade professionally documenting the North Texas music scene. I imagine the same is true for you, but let me just come out and ask it: How do you feel about this date passing?
It’s just crazy, really! I never imagined people would respond to the record the way they did, much less still give a shit 25 years later. It’s pretty awesome.

Have you had any moments of retrospection about all this? I know there’s that short run of anniversary shows planned for October…
To be honest, I don’t think about that stuff a whole lot. But it has been floating around for a while — at least as far as the tour. We generally do a little run around Texas here and there anyway, just to keep tight. [The tour] seemed like it would serve a good dual purpose.

Looking back on Rubberneck‘s release, does it feel like 25 years has passed since then?
Well… I dunno, man. But 25 years is definitely a long time. [Laughs.] I guess I feel different now. That’s the main difference. I feel like I’m finally pretty decent at my job. I’m no longer riddled with doubt and insecurities when going into the studio, or having to convince myself that I don’t suck.

When you think back on the Rubberneck recording sessions, do you remember feeling that sense of doubt? Or did it feel like you has something special on your hands? Like, was there any way you could’ve predicted then that people would feel the way they do about this record 25 years later?
No! No. Not in a million years. I knew we were going in to make the rock record that I wanted to make. And I knew that [the label] would have to put me on at least a couple of tours — nationwide tours. And that’s all I wanted: to make the record and at least go see the country. So, because of that, it just kind of kept rolling — and before we knew it, we were playing bigger places, then not playing support any more, and then headlining. That kind of stuff. It was a crazy two years! But, back to the recording, it was just such a cool thing to go in and record the sounds that I had been hearing in my head, and get them put down in a professional recording studio with professional people, who were helping make the sound that I’d wanted. I’d been in a recording studio before, but certainly not with any big shot record producers. And living at a studio out in the country while doing it? That was insane. We were living up in the hills of Mendocino, California, and the cabin was 150 yards away or whatever it was from the studio. So we’d wake up, walk over to the studio, record all day and walk back after dark.

Maybe it’s because the 20th anniversary of Rubberneck is still fresh in all of our minds, but I guess I was a little surprised to not see a bigger deal being made of the 25th anniversary this week. I did catch the videos posted to the band’s Facebook and whatnot from Chris Smith, Jeff K and Betsy Price, though, and I thought those were pretty neat to see.
Yeah, I thought those were super cool! Honestly, since [the 2016 presidential election], I try to stay off social media as much as possible just because I don’t want to just lose my fucking mind. So I have to admit I haven’t seen a whole lot of what has or hasn’t been posted. But I did see those videos, and the great things that those people had to say, which was really nice.

I imagine some of the excitement is being reserved for those October anniversary showcases in Abilene, Lubbock, Dallas and Corpus Christi. What can you tell me about the plans for those shows?
Well, we’ll do Rubberneck in sequence like we did a few years ago. But that’s only, like, 42 minutes of music. [Laughs.] So we’ll play more songs, too!

Looking back at your Burden Brothers era, I think it’s safe to say there was a time in your career when you weren’t really running toward the Toadies’ legacy as much as you maybe are now. Can you explain how your own thoughts on the legacy of the band and Rubberneck have changed over the years?
Oh, geez. I don’t really know how to answer that. I guess I’ve always wanted to be somebody who evolves, and doesn’t just do the same song over and over again. I don’t know if I was successful in that, but that’s what I wanted. I guess that’s for other people to figure out. I mostly just try to focus on the next thing.

To that end, the band did recently announce intentions to record again sooner than later, right?
Yeah! We’re working on a new record right now. There’s not a whole lot I can share about that — just that we’re writing, and we’ve got Steve Albini on the hook [to produce the album]. So, once I’ve got the whole thing written, if he’s still available, that should be a go.

Is there a loose timeline for that?
How loose is, “When I get it done?” [Laughs.]

This interview has been edited for length and clarity. The Toadies will celebrate the 25th anniversary of Rubberneck on Friday, October 11, at Dallas’ South Side Ballroom. Tickets to that show are currently on sale right here.