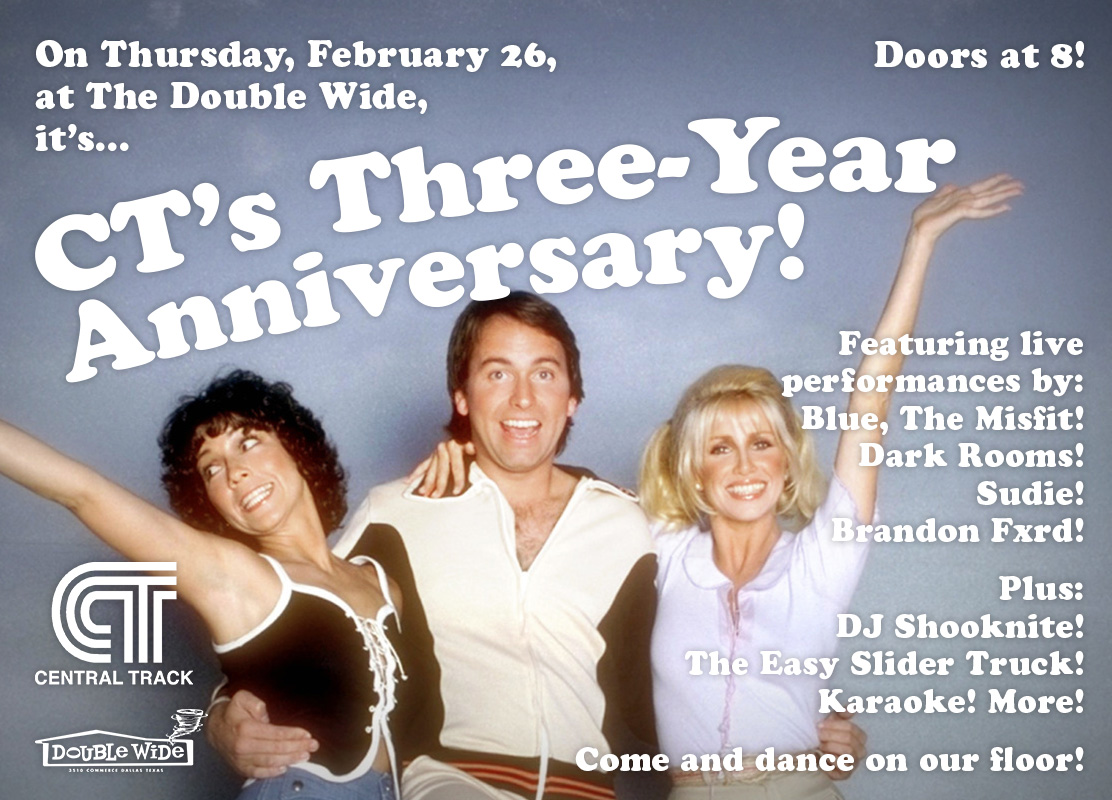 We've Been Doing This For Three Years Now. So Let's Celebrate, Yeah?

A lot can happen in three years. In the terms of this here venture we call Central Track, everything can.

So, yeah, it's a tall order to look back on all that we've done here at CT over this past three-year stretch and put my thoughts on it into words. Alas, here I am, feeling nostalgic and rather compelled to somewhat try.

Here goes: This whole experience has just been an insane whirlwind since we formally kicked things off on February 12, 2012, with this here boastful screed, I'll tell you that. I don't know that we really knew what we were doing back then. I'm not even convinced that we all the way do now, necessarily. But, dammit, we're forever trying.

And where we've been most fortunate is that we've been able to find an audience for those efforts. Since our launch, the 5,000 or so stories we've posted to this site have been viewed by just about a million separate North Texans — a fact that is more than a little mind-blowing, considering that we simply started off as a bunch of wayward writer, designer and photographer types looking to carve out a niche of our own in the crowded Dallas media landscape.

All we really knew back when we started this project was that we wanted to try to create something that was a little bit different from everything else out there. We hoped that some people would appreciate our perspectives on this city and its ever-evolving cultures. We're thankful — from the bottom of our hearts — that some of them have. Likewise, we're grateful for the many area businesses who've supported us along the way, taking out ads on our site, appreciating what it is that we're attempting to do and affording us the chance to continue doing it.

If any of the above sounds sappy, my apologies. But also: Whatever, man. Like I said earlier, three years is a long time. I don't know that anyone — ourselves included — necessarily believed that we'd last this long. So, yes, we're proud of our longevity. We're excited, too, about what still lies out in front of us.

For now, though, we just want to reiterate our thanks. To that end, we're going to be throwing a little bash on Thursday, February 26, to express just that.

This, our formal three-year anniversary party, will go down at the Double Wide starting at 8 p.m., and the party itself will be free to attend. Meanwhile, we'll also have some live performances, which will take place in this revered Deep Ellum haunt's venue space. They'll cost $3 to see, but — trust us — they'll be well worth it. Fast-rising Dallas hip-hop impresario Blue, The Misfit will perform. So, too, will R&B-tinged synth-heavy acts Dark Rooms and Sudie. Also? Up-and-coming rapper Brandon Fxrd will kick things off. Meanwhile, our pal DJ Shooknite from Track Meet will spin before, between and after these performers, our friends from the Easy Slider Truck will be out in the parking lot slinging some of the best burgers you'll find anywhere and, over in the main room of the bar, we'll have karaoke.

In other words: It'll be a good time. If you can, we hope you'll come out so we can thank you all in person for all the support you've offered us over these past few years.

You can get advance tickets to the concert right here, if you want to guarantee entry. And you can head here to RSVP to the party on Facebook, if that's more your speed.