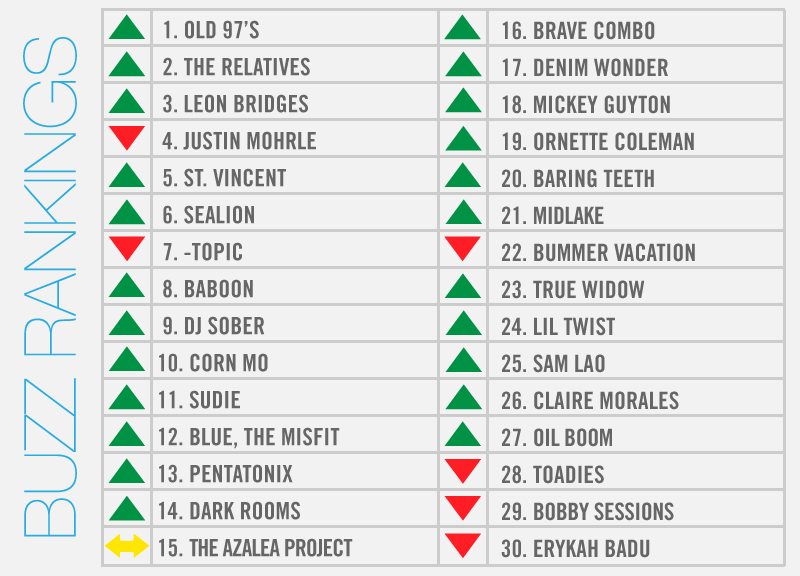 All the way back on Monday, the Homegrown Fest crew announced the lineup for their upcoming sixth annual offering. And, when they did, the addition of headliners Spoon and Old 97's had a few writers in town calling the thing the fest's most impressive lineup to date. Of course, it was also just one of five upcoming fest performances the Old 97's announced this week. The band will also perform at Shaky Knees and Wakarusa, among others.

In any case, the announce helped the band notch its sixth time atop our weekly, local music power rankings. Other buzzing locals also included in that announce were Sealion, Oil Boom, Bobby Patterson and The Orbans. For its part, Sealion not only turned in a “secret” set at Homegrown's announce party, but, across the street just a few nights before, the band played at Trees' Ragonk-a-Thon showcase. Bummer Vacation, The Azalea Project, -topic and Son of Stan were there, too.

Other big shows of note from the week included Baboon, Deathray Davies, Corn Mo and Nervous Curtains at Three Links last weekend, and The Cush's new LP release show, which will find that band joined by True Widow at Links on Saturday night.

As for the other big music stories of the week: Founding member of the Relatives, the Rev. Gean West, sadly passed away yesterday; Jeffrey Barnes left Brave Combo after 31 years in the band; Leon Bridges saw his debut single officially released by Columbia Records; and St. Vincent got interviewed by GQ and could possibly earn herself a Grammy at this weekend's ceremony.