Things To Do This New Year's Eve. 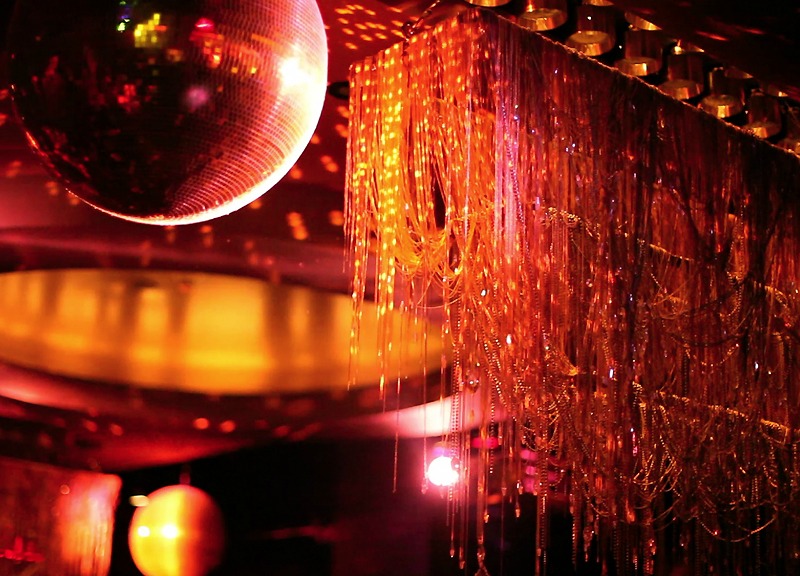 Earlier this year, WFAA's contract with the American Airlines Center to hold its annual Big D NYE event expired, and another one couldn't be worked out in time to plan this year's festivities.

That means Dallas' biggest and most prominent NYE celebration isn't happening this year.

Fret not, though, as there's tons of other places to ring in the New Year that won't be broadcast on live television. But before we get to those, let us first say that none of the following options are cool enough to die over. It's also a good time to remind you that this is another No-Refusal DWI Initiative weekend. If you're caught drunk behind the wheel from 6 p.m. tonight through 6 a.m. Monday, January 4, officers will take your blood on the spot.

Really, there's zero excuse to drink and get behind the wheel ever, but especially tonight, as Miller Lite has worked out a deal with DART to offer free mass transportation on city buses and trains starting at 6 p.m. tonight and running all the way up until closing time. Just another reason Miller Lite is North Texas' best local beer, I say. — Cory Graves

Lights All Night at Dallas Market Hall
Every year, Lights All Night takes over a gigantic space in Downtown Dallas. It's long been at the Kay Bailey Hutchison Convention Center, but it's at Dallas Market Hall this year. Whatever, an Uber ride's still an Uber ride. Dance some weird dances, stare off into some glowing lights and take in the sounds of some of EDM's biggest names, including Bauer, Datsik, Porter Robinson and Hardwell. Oh, and that's just this night's lineup. That's right: On January 1, you can do it all again, because this sucker's a two-night deal. — Hannah Steiner

The Anti-NYE Party at High Fives
No cover, no tickets, no fancy clothes, no assholes, no amateurs. Just drinks with good friends who act like they've left the house before. — CG

NYExcess: An '80s New Year's Party at Texas Theatre
This event's got it all, from an 80s costume contest to a burlesque show and even some live music. The real kicker? There's a human ball drop. A human, you guys. That'll one-up any coworker who watched the ball drop on TV, we promise. And it'll kill on your Snapchat feed. Plus it's affordable, at under $40 a ticket. — HS

Dallas Stars vs Nashville Predators at American Airlines Center
The Stars organization continues its tradition of playing a New Year's Eve game against the Predators. The puck drops at 7:30, giving you plenty of time to do dinner before or for drinks after. And, really, there's no better way to celebrate the new year than by watching your favorite hockey team — one of the best in the NHL — win at home. — HS

Wonderland 2016 at SISU
SISU is mainly known for its pool parties. But now that it's supposed to be cold outside, they're stepping their game up by going all out for NYE and throwing a bash hosted by a Maxim model named Crystal McCallum. You can expect a crowd just as young and attractive, with money to blow on the reserved table packages and bottle service. Oh, and you normies out there need not fret: The “Ultra VIP” ticket that runs $100 isn't a bad deal when you consider that 10 drink tickets are included (!), along with finger foods, priority admission and other base ticket perks like champagne. Here, you can dance the night away to a lineup of DJs and enjoy the “multiple balloon drops” and “thousands of glow sticks.” — HS

The Goodyear Cotton Bowl Classic at AT&T Stadium
Before No. 2 Alabama takes on No. 3 Michigan State in this year's college football playoff semifinals, Reckless Kelly and Jason Boland & the Stragglers will perform in the stadium's plazas. — CG

New Year's Eve Masquerade at Candleroom
With Feezy on the one's and two's. — CG

NYE at Pinstack Plano
Honestly, I've already sent this to my friends as my preferred plans. Pinstack is already fun, but this package includes unlimited attractions (rock climbing, laser tag, bumper cars, laser maze, bowling, and a ropes course), plus a catered buffet, drinks and, of course, a champagne toast at midnight. For the parents that couldn't get a babysitter, this is perfect for you, too. — HS

Casablanca NYE at Bungalow Beach Club
This year they're transforming the beach club into to fit an exotic Moroccan theme, complete with belly dancers, fire breathers, snake charmers, acrobats, hookahs and live camels. Guessing they'll be the only spot in town where camel selfies will be a thing. — CG

#CRISPdallas NYE Bash at That That
While most spots will be leading up to a ball drop of some sort, East Dallas late-night party spot That That will barely be getting going. The Outfit, Jayson Lyric, ThatKidCam, Curtis Mayz and DJs Endo and Colly T will keep this thing going to the wee hours of the morning. — CG

Dancing & Desserts at Kessler Theater
If you think you were born in the wrong century, you've probably been to the 1930s-styled Kessler Theater in Oak Cliff. For New Year's, they're bringing back the pre-swing band the Singapore Slingers for you to enjoy alongside dancing, dessert and the obligatory champagne toast. — HS

New Year's Eve With the Dallas Symphony Orchestra at Meyerson Symphony Center
Another annual Dallas tradition is the DSO's NYE concert, so put on your pearls and your best little black dress and head on over to the beautiful Meyerson for what's likely the classiest celebration in town. Enjoy the performances, and ring in the new year with a champagne toast — at intermission, of course. — HS

This Will Destroy You, John Congleton at Dada
This is not a concert for celebrating anything, folks. It's just a heavy, heavy bill — and a wide variety of heaviness and noise at that. Here, This Will Destroy You will have you contemplating the past year in a way that's more akin to drinking alone than anything else. And St. Vincent's producer will open things up with a rare solo set. And, hey, at least you'll be able to tell mom you did something. — HS

Ballin' on a Budget at BrainDead Brewing
Well, well, well. Over at Braindead Brewing in Deep Ellum — one of the best new bars in town, mind you — their serving up their four main house-brewed beers for just $3 apiece starting at 10 p.m. That's a magnificent steal, folks. Especially if you enjoy hanging among a sea of bearded men. — HS

Jonathan Tyler at Granada Theater
JT's been playing NYE shows at the Granada for so many years that we won't bother refuting the theater's claim that this is the city's longest running annual NYE event. Somebody's Darling and Dovetail open. — CG

Ring in the New Year at Reunion Tower
Usually not one to stay open late, the tower's GeO-Deck will stay open until 1 a.m., with the last elevator up departing at 12:30 a.m. Food and drink available for purchase at the top, and the Cloud Nine Café will be holding a separate prix fixe menu a floor below. — CG

Fashionable NYE at Fashion Industry Gallery
How much can you drink? It's $100 for the dudes and $80 for ladies to get into this one. Once inside, though, there's an upscale open bar if you think you can drink enough to get your money's worth. But I wouldn't show up in jeans either way. — CG

Five-Year Anniversary at Tomcats West
It might get loud at the anniversary celebration/NYE bash at this Fort Worth metal club. Warbeast headlines, and Interment, Creeper, Rabid Flesh Eaters and Chemicaust open. — CG

Big Bang NYE at Beauty Bar
Be honest with yourself and head into 2016 by doing what you did most every Thursday night in 2015. Let DJ Sober spin you into the second half of the decade as host Killa subliminally makes fun of you over the mic. — Pete Freedman

Eli Young Band at Billy Bob's
Two-step, ride the bull and toast with the champagne of beers along with the best ever country band from Denton. — CG

Final Night at Pastime Tavern
Bid the oldest standalone bar in town adieu as it closes after 78 years in business. — PF

Kevin Farley at Hyena's Dallas
Chris Farley's brother headlines Hyena's Dallas this NYE. Steve McGrew and Dustin Ybarra will do the same at the Fort Worth and Plano locations, respectively. — CG

Pearl Gem, With or Without U2 at House of Blues
They got you covered. Zing! — CG

Polly Wants a New Year at Double Wide
The Nirvana Experience and the Dead Flowers doing the Replacements, um, also has you covered. — CG

Wardance at Crown and Harp
Oliver Sheppard will be hosting Wardance at Crown and Harp's upstairs space, where he'll spin plenty of post punk and goth, and iill and Steel Hook Prosthesis will perform. Downstairs, meanwhile, all sorts of boundary pushers will play another edition of the venue's regular Monday Outward Bound Mixtape Session. Among them will be Peladini, Garuda, Kallahona, Orgullo Primitivo, Deflowered Electric Flesh Bride and Lauren Belmore. — CG

Sub Oslo, Pinkish Black, Duell at Lola's
Two heavy ass 817-based acts will say, “Fuck bottle service!” in the most ear-shattering manner possible, while a third says, “I've got your ball-drop right here!” whilst grabbing its crotch. — CG

An Intimate Night with SoMo at The Forum
Having recently sold out the South Side Ballroom, SoMo makes an appearance at this much smaller spot, which we're guessing will also sell out. — CG

Roaring '20s Party at Henry's Majestic
Roar into 2016 at this free-to-attend, throwback parties where fancy craft cocktails will abound. Might as well just sleep it off in their parking lot, too, because they'll be serving up a hair of the dog brunch bright and early the next morning, too. — CG