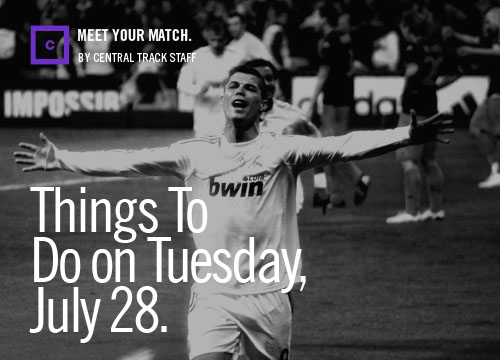 All joking aside, the Westboro Baptist Church is a real piece of shit.

You know the place — these are the folks who think they are doing the Lord's work by picketing funerals and telling the world's gays, artists and anyone who likes to live their life that they are going straight to hell.

New and not-at-all-surprising controversy surfaced recently regarding the well-hated church. When answering questions in a Reddit AMA yesterday, former “church” member Zach Phelps-Roper, grandson to the late Fred Phelps, told the internet that the church prays for certain people to die — in the name of God, of course.

Anyway, the moral of the story is, you've got much better things to do tonight than to stay at home and pray for other people's demise. — Chase Whale

Real Madrid vs. AS Roma at Cotton Bowl
Still feeling blue that The World Cup is over? Hold on to your butts, for the Guinness International Champions Cup has started. Spain’s most prominent futbol club, Real Madrid, and its star Cristiano Ronaldo, will be facing off against three-time Series A tournament winners, Italy's AS Roma. The match kicks off at 8:15 p.m. — CW

The Best Movie Fest Ever Presents: My Favorite Musicals at Cinemark Plano
For two nights only, Cinemark Plano is going to be showing digital remastered prints of Moulin Rouge (2001), Oklahoma! (1955) and Hello Dolly! (1969) back-to-back with intermissions. They are calling it The Best Movie Fest Ever. There will be a costume contest, trivia contests and the chance to win prizes from local retailers, some of whom will be on-site. To get enlightenment on how to not name your festival, read our editorial on the subject here. — CW

Tori Amos at Winspear Opera House
After wowing audiences on Conan recently, Tori Amos continues breaking barriers and pulling people into her music tonight here in Dallas. Bring a box of tissues and friend to lean on. — Ashley Gongora

Seaway and Stickup Kid at Prophet Bar
The Canadian pop-punk band Seaway co-headlines this one along with California band Stickup Kid. Meanwhile, the like-minded Candy Hearts, Driver Friendly, Evanston and The Outliers will share opening duties. Just remember to check brush up on Seaway's latest album, Hoser, before heading out — y'know, as a reminder that high school never ends. — AG

The Blank-Men, The Joy Kills and Trai Bo at Crown and Harp
With The Blank-Men's “spazzoid synth-punk” sound and The Joy Kills energetic post-grunge vibe, this show is guaranteed to be a good one. Come out for a good night of fun, loud and wild music. — Chrissi Chetwood

Twin Peaks: Fire Walk with Me at Texas Theatre
If you don't know who killed Laura Palmer, you're probably 20 or don't like David Lynch, perhaps the weirdest auteur since Ed Wood. If you do know who killed Laura Palmer, congrats, we are not enemies. Twin Peaks: Fire Walk with Me, the film that serves as a prequel to the television series screens tonight. Only at the Texas Theatre. — CW

Cover photo via. To find out what else is going on today, this week and beyond, check out our events page.