Things To Do On Thursday, January 8. 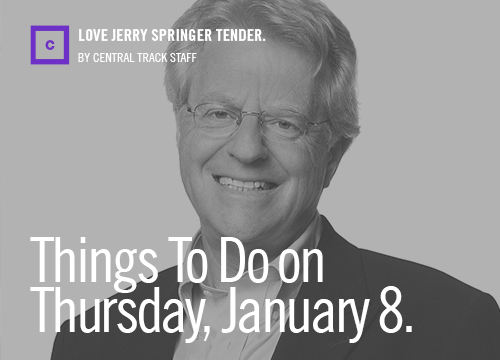 If, on the other hand, you've been dying to know what a Jerry Springer Show/Elvis Presley concert mashup looks like, you'll have to wait until later tonight.

Yeah, there's pretty much an answer for everything in Dallas. — Cory Graves

King Bucks at Henderson Avenue Country Club
It's pretty safe to say that people from Dallas are all about that barbecue. Despite the fact there's easily more than 50 badass barbecue joints scattered around town, the Henderson Avenue area is notably devoid of the goods. That changes tonight, when the owners of McFadden's open their new honky tonk in the old Tried and True space. The King Bucks will bring the swing tonight, but live music will continue at the joint several nights a week from here on out. — CG

Jerry Springer's Karaoke Tribute to Elvis at McKinney Avenue Tavern
This too-hot-for-TV Elvis tribute comes on what would have been The King's 80th birthday. Whether it's a gimmick is hard to discern. No, you probably weren't previously aware you wanted to catch The Ringmaster convincingly croon along to midi versions of Elvis' biggest hits, but for his part, Jerry's not doing bits. He's genuinely an Elvis fanatic, and does a pretty spot-on job impersonating the guy to boot. Our final thought? You can't help falling in love with the cardigan-clad Elvis impersonator. — CG

Damon Wayans at Arlington Improv
There's a lot of Wayans out there. There's Shawn, Marlon, Keenan Ivory and Kim, all of whom got their start on In Living Color alongside Damon. Guess that doesn't help out much. Um, OK. Well, this one's also the father of Damon Jr., who plays Coach on New Girl, which also isn't necessarily relevant to our query. The Major Payne star is the guy we're talking about. And he's a well-established stand-up, which he'll prove tonight out in the 'burbs. — CG

Luke Wade at Trees
The longtime veteran of Funky Town's folk-rock, country and, more recently, gospel-tinged, blue-eyed soul scenes recently competed on the most recent season of NBC's The Voice. The program's detractors will surely be quick to point out that in its six previous seasons, the series has yet to produce a single legit star. But there's plenty reason for Wade to be excited just the same. You do remember his performance of Otis Redding's “That's How Strong My Love Is,” right? — CG

Tone Bell at Addison Improv
Tone is funny. We know this because that's the URL of his website. You may recognize Bell as RJ the bartender on former NBC sitcom Whitney. Then again, judging from the show's ratings and subsequent cancellation, you may not. That's OK, because Bell's real bread and butter was always the random observational humor he employs during his stand-up sets. — CG

Rhapsody on a Theme of Paganini at Meyerson Symphony Center
Aside from Rachmaninoff's virtuosic concerto will be the Dallas premiere Mason Bates' Liquid Interface, Chavez's Sinfonia India and Dvorak's Symphony No. 7. The program runs through the 11th. — CG