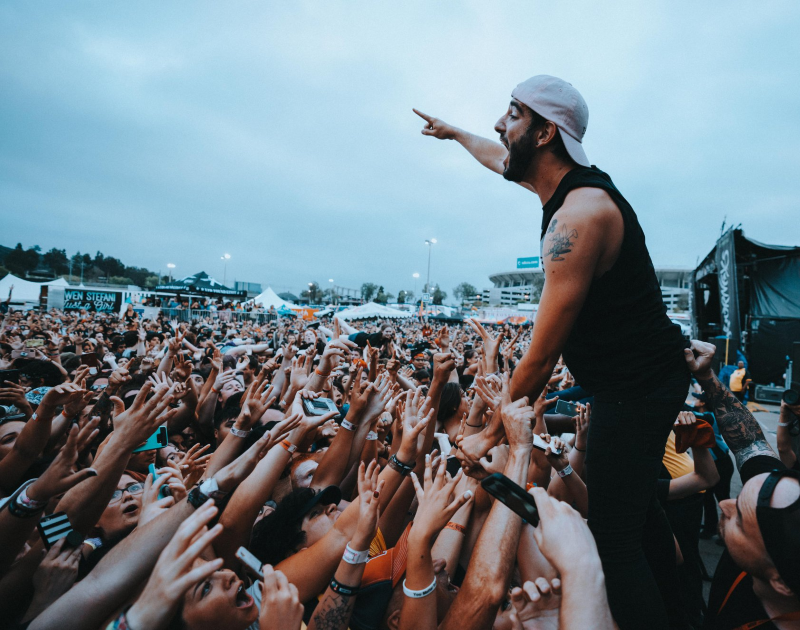 Get In The Pit at the Last-Ever Warped Tour, Get Real With Bill Maher, Run And Tell That at Hairspray or Get Vocal With Hatsune Miku.

Recently, an American woman donned a disguise and hopped an eight-hour flight to the U.K., traveling a total of 4,000 miles just to tell a friend “you’re it” in a epic, year’s long game of tag. Sounds pretty fun and everything, but takes a lot of work. And money. And time. And planning.

You don’t have to go through all that trouble to fill up your weekend. You just have to peruse the following list of local options for a few minutes. No frequent flyer miles required to play. — Cory Graves

Vans Warped Tour at Dos Equis Pavilion
It’s the last-ever Vans Warped Tour! If you were ever an angsty teenager who enjoyed pop-punk, ska or just being super edgy — or maybe if you still are — then this is your final chance to see some of the big names of the late ’90s and early 2000s doing it up like they did back then. Relive the phase some of us would like to forget, while rocking out along a crowd of people who will forever remember. Reel Big Fish, 30H!3, Mayday Parade, Bowling For Soup and Twiztid are just some of the dozens of acts playing. — Jacob Besser

Hatsune Miku Expo at The Bomb Factory
The animated holographic voice behind the super viral Nyan Cat video is headlining a show at Bomb Factory, backed by a live band, no less. Technology rules! — Jessi Pereira

Last Chance Records Summer Hangout at Dan’s Silverleaf
All three nights this weekend, Last Chance is taking over Dan’s with stacked shows. Slobberbone, Hamell on Trial, Adam Faucett & the Tall Grass, Daniel Markham and Kim Nall & the Fringe all play tonight. You’ll save some dough, too, if you nab a three-day pass, available at the link above. — CG

Joan of Arc at Main At South Side
For the Chicago noise-poppers’ twenty-third studio album, the band changes things up, this time allowing guitarist Melina Ausikaitis to take on lead vocal duties instead of usual frontman Tim Kinsella. It’d be unexpected if not for the fact that the band has built its twentysomething-year-career on keeping its listeners on their toes. Cleanup and Hoaries open. — CG

Tyler Farr at Billy Bob’s
The ”Guy Walks Into a Bar” singer brings his chart-topping, country-rocking ways to the Stockyards. — CG

Jay Mohr at Addison Improv
The comedian has added a lot to his bag than Christopher Walken for Skittles in the years since leaving an overcrowded SNL cast in the ‘90s. He’ll be doing stand-up here every night this weekend. — CG

Bill Maher at WinStar World Casino and Resort
Test your limits with the boundary-stretching comedic stylings of Bill Maher at this one. Notorious for his political commentary and cheeky observations on his HBO show, Real Time with Bill Maher, he’s sure to make you laugh, think and take an honest look at life. He’ll probably even manage to push a few of your buttons in the process. — Porttia Portis

Aaron Aryanpur at Hyena’s (Fort Worth)
Aryanpur has a sharp delivery and expert timing, but those aspects alone aren’t enough to explain how Aryanpur has become one of the best — and most respected — comics in DFW. He talks openly onstage about his life, and he’s able to find terrific, singular comedy in deeply personal matters. That willingness to be honest and vulnerable with crowds is what makes him an irreplaceable performer. He’ll be doing two sets Friday and another two Saturday. — Alex Gaskin

Z-Ro at The Rail Club
The King of the Ghetto aka The Mo City Don aka the Screwed Up Click member born Joseph McVey IV raps legendarily in the Fort. Phaze and Renizance also perform. — CG

La Bodega: Latin Night at RBC
It’s the first Friday of the month, therefore it’s time once again for Blue, the Misfit to bring his monthly All Latin Music Everything event back to the Deep. — CG

Hairspray at Winspear Opera House
The musical adaptation of John Waters’ most recognizable/mainstream feature hits the Dallas stage once again. The hit Broadway musical gets going Saturday, and runs through July 15. — CG

Dubs & Dogs 2018 at Lewisville Volkswagen
Drive your old Beetle or camper van or 2018 Jetta back up to the dealership so you can eat some hotdogs with your fellow Dub drivers. No, you take a hike. — CG

Emo Nite L.A. Presents: Emo Nite at 2513 Deep Ellum
The concept of “Emo Nite” — a party in which the DJ plays emo-centric tunes exclusively, basically — isn’t exactly a new one, not even in North Texas. But at this monthly party, hundreds of emo fans pack into the space formerly known as The Prophet Bar’s big room to shout along to the lyrics of their favorite emo, screamo, metalcore and pop-punk songs of yesteryear, egged on by a variety of co-hosts. — Pete Freedman

Gary Allan at Billy Bob’s
Check out this platinum selling California singer belts out archetypal country ballads and tunes. Or not. See if we care. — Alex Copeland

The Derailers at Levitt Pavilion
Though the Austin-based band’s recorded works don’t necessarily carry quite the level of clout that they did a decade ago, it makes sense that two of their best-known albums would be live recordings. Nearly 15 years removed from losing their original vocalist and primary songwriter, Tony Villanueva, the Bakersfield sound-adoring honky-tonk outfit has remained something of a force to be reckoned with — in a live setting, anyway. — CG

One-Year Anniversary at Dirty Job Brewing
It’s been a year since the Mansfield brewery opened its doors. Celebrate with some beer and cornhold. Cheers! — CG

Star-Spangled Spectacular at Viva’s Lounge
A burlesque tribute to the ladies liberty. Because the best way to celebrate America’s birthday is in one’s birthday suit – or close to it, anyway. — CG

The Devon Allman Project at Kessler Theater
Gregg’s boy has got him a band of his own. And playing in it on this run is special guest Duane Betts, son of Gregg’s old bandmate Dickey. — CG

The Mighty Mighty Bosstones at House of Blues
I’ve never been to see the Boston pop-punk band. But I know someone who has. Makes me wonder if I should. Because I’m sure that it’s good. That’s the impression that I get, anyway. — CG

I am Dallas Hip-Hop at Trees
Mozez Tha Great has been doin aight for a minute, touring with Bun B., Paul Wall and Eric B & Rakim in the past few months. So now that he’s on the come up, he wants to bring his old pals up with him. Here he’ll give some extra shine to FL Loud, Previs the Best, Jui$e Leroy, IQmuzic, Contrabandz, Hyper Fenton, Alex the Great, Amber Bee, Shooge McGee, Eye Am and DQ Hampton. — CG

Truth in Comedy at Full City Rooster
Also known as TIC, three blood-sucking storytellers will tell intimate tales about their lives, then another trio of comedians will do stand-up sets based on those stories. Because if you can’t learn to laugh at yourself, someone else will. — CG

Fantastic Negrito at Cambridge Room
The Grammy-winning contemporary bluesman approaches the genre with a refreshing punk spirit. Critics are pretty unanimous in calling his new sophomore album a worthy follow-up to his award-winning effort. — CG

Xscape at Verizon Theatre
This R&B vocal quartet from Atlanta, Georgia was a ’90s staple. The group released a new EP earlier this year, and hopefully will sample some of it during this tour. Though only three of the original four members will be a part of this new project, the show tonight is sure to be a memorable one. — Marlene Núñez

Pearl Earl, Sunbuzzed, The Bralettes at Three Links
The Bralettes like to position itself as body positivity champions, frequently performing in its namesake garment. But to pigeonhole them as just that would be a pretty big oversite, and no small injustice. The up-and-coming lo-fi garage rockers are ones to watch. The band’s recorded material boasts a melancholy-yet-hopeful tone a la early Best Coast that’ll should put them in heavy rotation on your summer playlists. And they’re just the openers of this hella-stacked, female-heavy bill. — CG