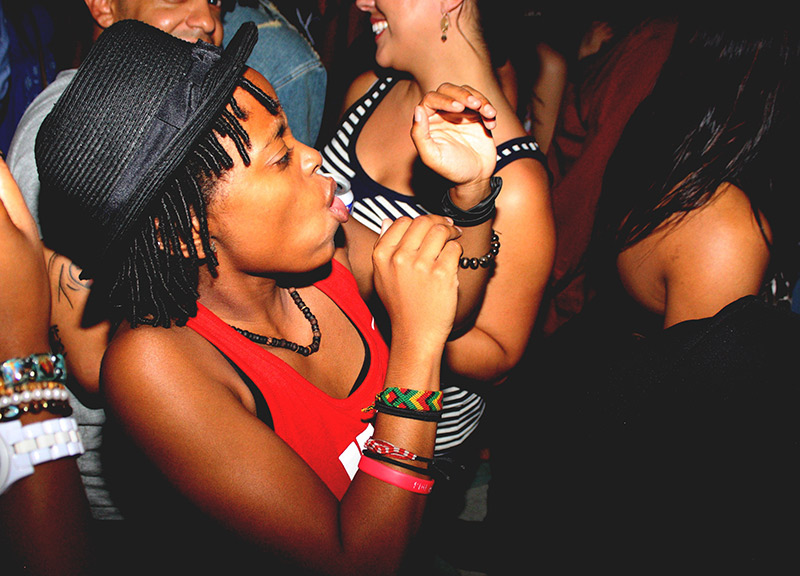 Looking Back At Five Years Of Memories With Members Of The Beauty Bar Crew.

Beauty Bar reminds me of one of my favorite Kanye West lyrics: “I’m pop the Barkers / I’m hood the Parkers.” That line’s a send-up to Meet the Barkers, an MTV reality show from the mid-aughts that centered around Travis Barker, his wife Shanna Moakler and their family, and The Parkers, an extremely black sitcom that aired on UPN, a network that at one point had about six billion black sitcoms on its programming slate.

Beauty Bar, like that glorious Kanye lyric, is where you get an intersection of culture. It’s posh, it’s hood, it’s bougie, it privileged and it’s a collection of most every other adjective we can use to categorize people. But, most importantly, it’s turnt up.

Oh, and sweaty. And loud.

All these people come out to 1924 North Henderson Avenue on any given night because it’s a hell of a party. And one thing most people have in common when they do is that they wanna dance their ass off every now and again.

Tomorrow night, Beauty Bar will celebrate that legacy with a fifth birthday bash featuring residents Trillwave, Sober, Blake Ward and Red Eye on the ones and twos.

In honor of the occasion, we asked a few people who’ve been behind Beauty Bar’s magic over the years — DJs, rappers, employees — about their favorite memories at the club.

DJ Sober (DJ, artist, gets high off life and music): “When Badu played the anniversary, I walked in at 9 p.m. to set up and there was already a gang of people in the building. I decided to go ahead and start spinning at 9:30. By 10 p.m. it was at capacity — and I had the whole bar singing Lauryn Hill at the top of their lungs. The energy was through the roof that night.”

Blue, the Misfit (rapper, producer, DJ, child in the wild): “A.Dd+ had just released Dive Hi Fly Lo, and they had a merch table set up near the DJ booth. Some lady was there next to it and whipped a titty out for Slim [Gravy] to sign it — and, as that happened, breast milk dripped out and I noticed how ‘out there’ she was. She then finally realizes what’s happening, and instead of being embarrassed — which is a point she should be beyond anyway — she decides to press and squeeze the milk everywhere. Merch included. We all spazzed out about it.”

DJ Blake Ward (DJ, man with impressively good hair): “When Spank Rock rapped at my b-day, that was pretty amazing. But, honestly, last week was one of my favorite nights of all time. The crazy thing about Beauty Bar is it just keeps going. You would think, after five years [of holding a residency there], it would suck. But it’s still my favorite party to DJ hands down. Some of the best nights are the ones that I walk in to with nothing special planned. The crowd is very open to whatever I play, and that is truly the best thing a DJ can ask for.”

DJ Colly T (DJ, ballet pioneer): “I fuckin’ loved, and still do love, DJing there. But I think my fondest and first memory I have of that place has to be the first time Spank Rock came, I think in 2011. I was literally drenched head to toe in sweat. At some point, Nareem [from Spank Rock] pointed at me and said over the mic, ‘This dude is inventing a new form of ballet!’ Everyone danced, and I flipped out at that. I think it was like my third time at the bar, and I knew I was gonna come back as often as I could.”

Emily Cain (bartender at Beauty Bar, witness to true flash of magic): “Gosh, I have so many favorite memories, but one of my favorite would be when a gentleman decided to reenact Flashdance with our water container and then booked it out the door. It was so random and ridiculous. I couldn’t stop laughing.”

Ynfynyt Scroll (DJ, man with creative spelling and bladder techniques): “My weekly was some of the best times I’ve had in my DJ career. Before then, I’d always been a part of a crew in some form, so I had to learn to how to pace myself for multiple hour DJ sets and not just try and play fire the entire time. I also perfected my own style of being able to expose people to music they’re not used to or haven’t heard or don’t like (yet) within the context of what they’re comfortable with, via remix or edit or blend or just some sort of cheeky mix. I learned how to hold my pee for five hours. I learned how to dance in .04-square-feet of space. I learned how to have patience for people barking the entire night to ‘play something we know,’ aka how to ignore them.”

Red Eye (DJ, label owner, It’ll Do and Beauty Bar resident): “Being the member of the Beauty Bar DJs that has been there from Day One, it’s pretty impossible for me to pick one favorite memory out of all five years. So I’ll just say my favorite times are when we’ve had Juan Maclean, Kim Ann Foxman, Holy Ghost and Tensnake play. Those were all excellent nights of music in a packed, intimate setting.”

Jay Garcia (bartender, prank victim): “When I first started working at Beauty Bar, the guys decided to initiate me with a prank. They put ‘Goblin Queen’ in Old English decals on my windshield. I got all the letters off, but for weeks you could still see the outline of Goblin Queen on my windshield.”

88 Killa (rapper, emcee, Twitter fingers): “To me, Beauty Bar is one of the last few real Dallas spots that hasn’t been tainted/ruined by bottle service and dress codes. My favorite memory is over the summer when we had people dancing on the couches, chairs and anywhere/anything they could stand on top of. It was so hot in there that night, but nobody cared, and I just kept shouting ‘Flame Emoji!’ over the mic because that was the only thing that could convey the energy. It was lit AF!”

Ty Anderson (member of the Trillwave DJ collective, trill person): “On behalf of Trillwave, our favorite memory is playing the 2014/2015 NYE party! No crazy gimmicks. Just us, the Beauty Bar staff and the amazingly fun crowd! You could say it was lit! That night definitely stands out for us. We all had a blast.”