The State of Dallas Parks 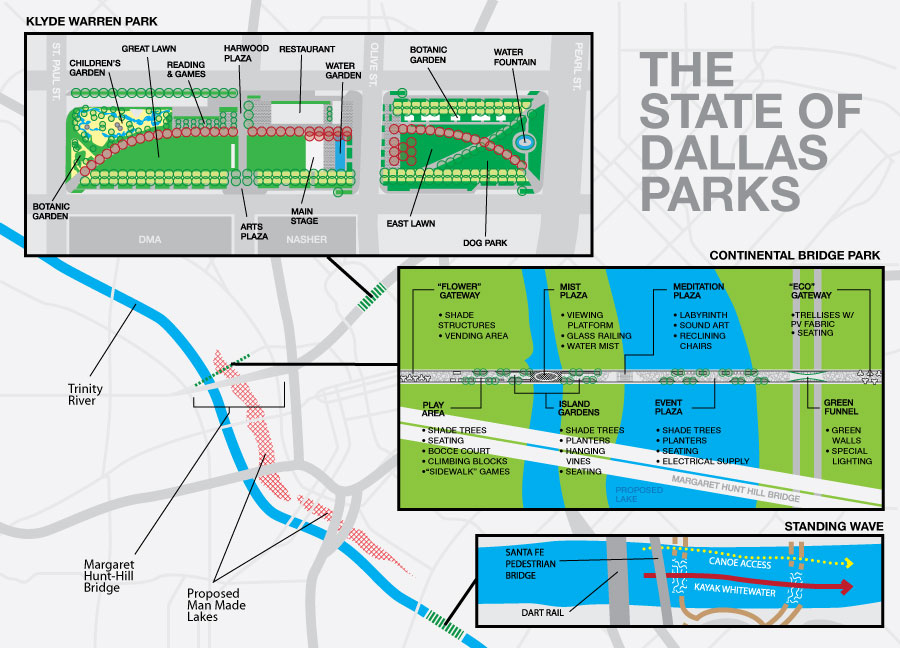 Dallas has been on a pretty serious urban renewal kick lately: Currently, there are scores of projects brewing, in progress, or being completed all over the city.

The biggest source for all these projects? The Trinity River corridor. Planning began on this nearly $1.75 billion project as far back as 1998. Throughout all of this construction and planning, we have seen some pretty outlandish projects come and go, along with plenty of delays and false starts.

But the great part of this push to clean up everything and make it shiny and new is that we citizens get some new parks and places to hang out at.

Sadly, it looks like the $16 million whitewater recreation park near Continental Avenue is totally dead. From the ashes of that failed project, though, the city did complete The Standing Wave further south on the Trinity. Finished in late 2011, the water feature is an in-channel, white water rapids course. Using lots of rocks and concrete, the city reset the geography of the river to add a two-tiered rapids area for recreation purposes. The project cost somewhere north of $4 million, and the jury is still out on how much use it will even get. There have been a lot of complaints about the safety of the canoe channel built to give boaters a calmer ride through the area, and, of course, there are concerns about the water quality. But, hey, at least it was finished!

The real Spruce Goose of the Trinity River renewal plan, however, is the Horse Park — but you'll notice we left it off our maps. The $30 million dollar project has been stalled for years and the future of it looks bleak. The original group tasked with getting the project going had two years to raise $15 million to match the city funds for it. They were only ever able to raise $1 million. The city then gave them an extension on the fundraising but it didn't do any good. Currently, the project has gone back to the city, who will begin taking applications this spring for a private vendor to come in and run the Horse Park. As of January, the city's goal is to have selected and awarded a contract to a vendor by May 2012. Don't hold your breath.

Speaking of not holding your breath: A big part of the Trinity renewal project includes a couple new lakes within the Trinity River corridor. There would be a large one in West Dallas, and two adjacent ones right next to each other right where the Mixmaster is. These lakes though are hopelessly delayed, though, because the Army Corps of Engineers won't let anything happen in the river basin until they have surveyed the levee system and either fixed it up or given it a green light to continue as is. There is no date on when that will happen. Some suggest as soon as 2014. That will end up delaying a host of scheduled projects, including new bridges for where I-30 crosses the Trinity.

Along the lines of crossing the Trinity: We've all watched as they put up the infamous Bridge to Nowhere. It has become something of a local joke, but, whatever, it's finally done. Plus, it looks real pretty and, at some point, when they finish the off-ramps, it'll be open to traffic. If nothing else, it'll be the best way to get over to West Dallas to see those new Shephard Fairey murals. And it'll be replacing the old Continental Avenue bridge, which is going to become a “linear” park now that it's usefulness is out the window. Not unlike the Highline in New York City, the $10 million dollar project looks really promising and sounds like it could be a really great place to hang out. Plus, in the huge plan the city released there is a hint of recreational ziplines being a part of the park — and who doesn't like ziplines? Construction is scheduled to begin as soon as they move traffic over to the new bridge, and the Continental Bridge Park is tentatively scheduled to open in August 2013.

The real gem in the city's parks crown, though? The massive green space that'll be providing a partial roof to Woodall Rogers Freeway as it cuts through downtown. A lot of urban renewal projects tend to have iffy results and end up being the proverbial lipstick on a pig, but Klyde Warren Park, as it is being called now, is going to bring some big changes to downtown. First off, it's covering up some serious urban blight. Second, it'll connect uptown to downtown and the arts district. And it will feature everything from a dog park to water features to botanic gardens to oak tree-lined walkways. There will be a restaurant on the premise, too, and even an event stage for concerts and gatherings. Construction is under way and the park is scheduled for a Fall 2012 premiere.

Looks like we have a lot to look forward to in 2012 and 2013. Better start learning to love your neighbors, Dallas residents. You're going to be seeing a whole lot more of them real soon. 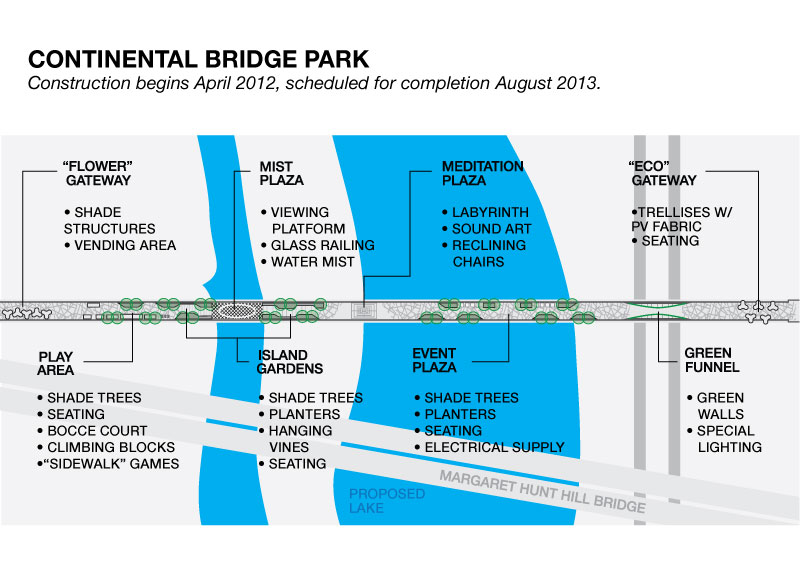 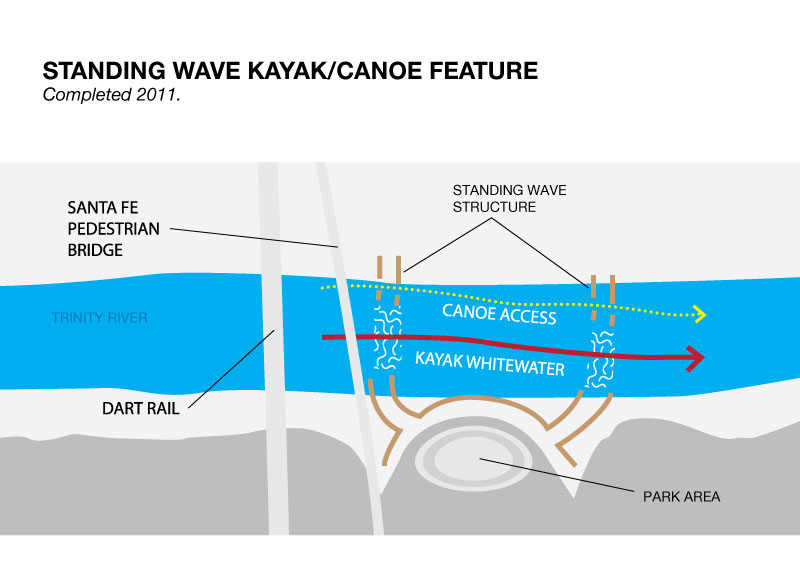 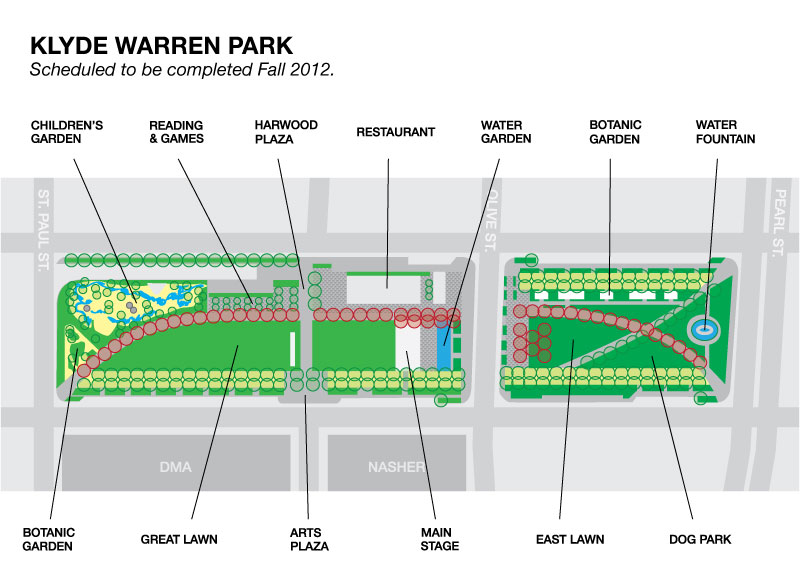