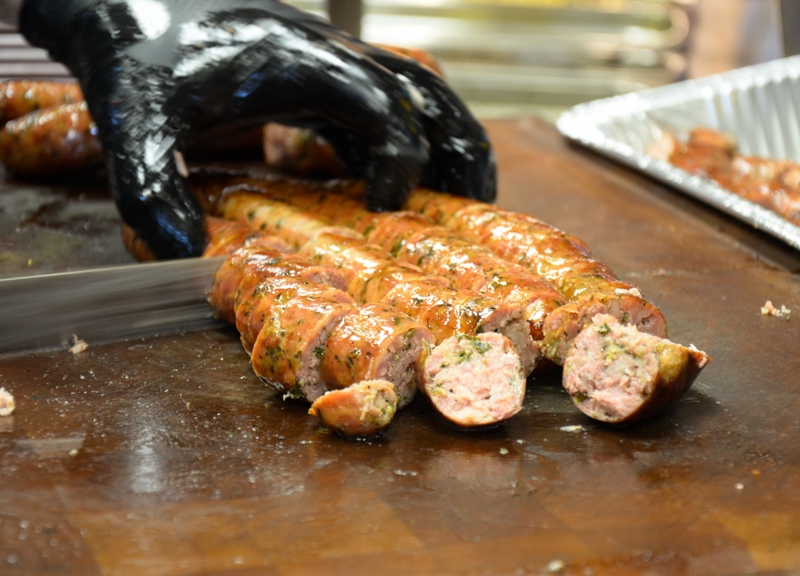 Eatzi’s Buys The Slow Bone, Emporium Pies Is Open In Deep Ellum and Zalat Comes To The Cedars.

Last week in this space, we shared some cool news, passing along word that the Dallas-based chicken chain Cowboy Chicken is hoping to have around 45 stores open in possibly as many as 10 states by 2018. But what can the people in these new locations look forward to as the brand doubles in size in the next two years?

If they were paying close attention to local news in Forney last week, they might’ve caught a glimpse. On Thursday night, two men drunkenly stumbled into a Cowboy Chicken on the north side of U.S. Highway 80 looking for some enchiladas — but with one of the men dead-set on not having to pay for that haul. Anyway, when he got upset about the cashier having none of that, his pal took exception to the first guy’s behavior, sparking a brawl that spilled out behind the restaurant. By the time the cops arrived on the scene, the free enchilada seeker had bolted — but not before having bitten off a piece of his buddy’s ear.

There’s almost certainly a Mike Tyson/Tyson Chicken joke to be made here, but I’m not quite putting two-and-two together on that front at the moment. Here’s what I do have: “Cowboy Chicken. When free, it’s a deterrent for cannibalism — and it’s coming your way soon, America!”

Speaking of things that are coming soon, Eater reports that the burger-and-beer joint Little Woodrow’s, a transplant from Houston, is set to open up shop this weekend in East Dallas on Ross near the Central Expressway. If nothing else, that sounds like good news for the still-new Eastbound & Down Icehouse, which we imagine was getting lonely in its perch on that stretch, with little else but Three Sheets and Bungalow Beach Club around to keep it company and share beers with. Regardless, Ross Avenue is definitely on the gentrification come-up. Who knows what that strip could look like in 20 years?

The folks behind The Grapevine Bar might be able to share some perspective there. On Saturday night, the adored Maple Avenue dive — shout out to its backyard basketball court — will celebrate its 20th anniversary. Details on that sure-to-be-sloppy deal can be found here.

On the subject of killer parties: It would behoove barbecue fans of the region to know that the 2016 version of Meat Fight is set to take place on Sunday, November 13, at Four Corners Brewery. The meat-ebration featuring the barbecue stylings of some 30 or so area chefs is always a highlight on the annual foodie calendar — not to mention a good cause, as it benefits the National Multiple Sclerosis Society. In turn, it’s one of the hardest tickets to score in town, even at $100 for standard entry and $200 for the VIP treatment — or is it “meat-ment,” maybe? Either way, I bring all this up because tickets are set to go on sale on October 4 at 10 a.m. via Prekindle, and if you wait more than, like, five minutes past that on-sale time to buy it, you’re gonna be SOL, pal. Fair warning!

If you miss out on those tickets, maybe try your hand at the 2nd Annual Dallas Kosher BBQ Championship. Presented by Richardson’s Congregation Beth Torah and hosted by KLUV‘s Jody Dean, this event goes down Sunday, October 30, from 10 a.m. to 4 p.m. in the parking lot of Sunnyland Furniture at the intersection of Coit and Spring Valley. It’s free to attend, but indulging in the meats will cost you, with proceeds going towards the temple behind the event, as well as Community Homes for Adults, Inc.. The kosher rules behind the competition are pretty interesting, actually. Per a press release: “Because no work can be done or fires lit on the Jewish Sabbath, teams prepare the meats on Thursday night, then start cooking after sundown on Saturday.” Organizers will provide the meats (chicken, turkey, brisket and ribs, but no pork, duh) along with spices, condiments, utensils and grills to make sure the competition’s meats are prepared to kosher standards, making the playing field pretty even. There will also be separate pickle- and hot dog-eating competitions. For more info, or to sign up, head here.

Staying on the barbecue tip, Side Dish revealed this week that Jack Perkins has sold his stake in The Slow Bone to the folks behind Eatzi’s. Did Perkins use that as an opportunity to boast about what a jerk he is? You bet he did!

New management, of course, is better news than a closing. But, alas, closing is what’s happening to Henderson Avenue mainstay Hibiscus, which is shutting down its operations on Saturday, per Side Dish. Pour one out, if you feel so inclined.

On the other hand, you can pour it up on behalf of Zalat and Emporium Pies: The former, an adored pizzeria known for its stoner-friendly options, just opened up its second Dallas location (and fourth overall) with a new hub in The Cedars that should expand its delivery radius; the later, known for its to-die-for pies, just opened up a new storefront in Deep Ellum right next to Pecan Lodge, bringing the Emporium location count up to three now.

Not sure what to use in those toasts? Maybe try one of the five brews being promised at Hemisphere Brewing Co., which is set on becoming Rockwall’s second brewery, according to Guidelive.

Perennial top area booze-slinger Happiest Hour, meanwhile, is getting into the brunch game. Escape Hatch digs their new crabcake benedicts — and, hey, so do we!

Other things we’re into at the moment: The impending arrival of ice cream rolls via Chills 360; Monkey King‘s dessert options; and JuiceLand‘s punny juices.

Finally, we’ll end this week with a bit of a mystery. Is Shake Shack headed to Fort Worth? Escape Hatch thinks maybe!

Slow Bone cover photo by Travis Baugh. Got a tip for The Spread? Email us!