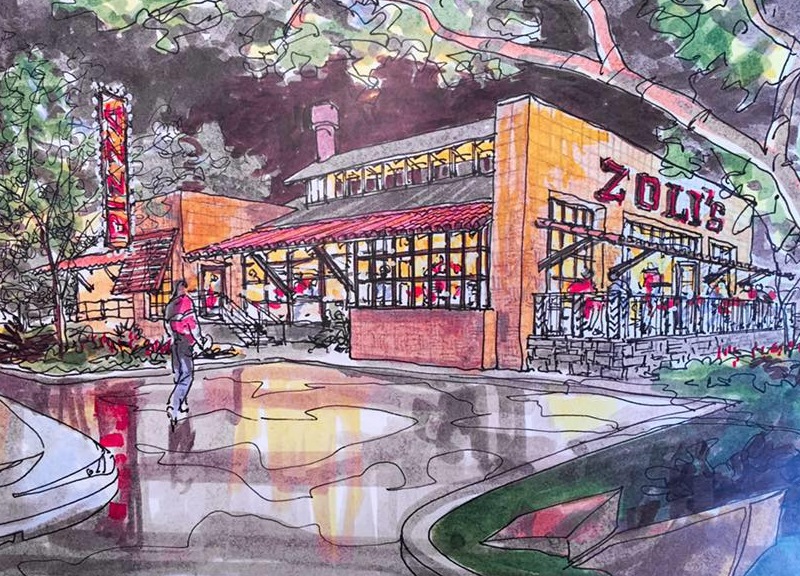 Zoli’s Rises From The Ashes, And Dean Fearing Hocks Spam Corny Dogs From A Truck.

Following the collective mourning of Zoli’s NY Pizza closing its Bishop Arts location back in February, the Jay Jerrier concept is resurfacing in Addison with chef Cody Sharp at the helm. As SideDish reports, Zoli’s 2.0 is taking shape in the former Snuffer’s space. The new restaurant will feature a full bar and Sharp’s take on Northeast Italian dishes, such as fresh pasta, family-style plates and entrees, in addition to round and square pizzas, sandwiches, salads and more. An opening is slated for fall.

Moving forward, chef Dean Fearing is bringing a Spam corny dogs via food truck to the Metroplex. The chef is serving up the fried treats during Richardson’s Wildflower Arts and Music Festival as a part of the SPAMERICAN Tour, which partners with Operation Freedom to support U.S. military members overseas, veterans and their families. The event takes place on Friday, May 20 from 6 p.m. to midnight, May 21 from 11 a.m. to noon, and Sunday, May 22 from 12:30 to 8 p.m.

Speaking of The Father of Southwestern Cuisine, the chef’s Fearing’s at Dallas Ritz-Carlton now has a dedicated “guacomologist” and tequilier. Per Escape Hatch Dallas, a “one-of-a-kind” tequila vault will be debuted on Friday, May 13, featuring a selection of rare spirits like Patrón en Lalique. Just FYI, only 100 bottles of that $8K per bottle spirit were ever made! Anyway, the tequila vault will offset the nightly guacamole experience, where a focus tequila education will accompany the chef-guacamologist’s limited edition, hand crafted guacamole. The vault will be open nightly at 6 p.m.

In closing news, Denton’s Flatlanders Taco Co. is has officially shut its doors. The brick-and-mortar extension of its food truck predecessor called it quits on May 4, after a year of operating across from Oak Street Drafthouse. Per The Dentonite, owner/lessee John Williams is currently looking for a new tenant to take over the rest of his five year lease on the space.

Over in Fort Worth, Kin Kin Urban Thai also closed shop this past Sunday, with a new venture called Oni Ramen already set to take its place. Former Lily Sushi chef Jesus Garcia aims to model the concept after Austin’s Ramen Tastu-Ya, with a menu that will incorporate duck, chicken, turkey and pork broths. Look for an opening in the coming months.

In craft beer news: Dallas Beer Kitchen and Deep Ellum Brewing Co. are hosting a Game 7 watch party today at 5 p.m. Watch the Dallas Stars take on the St. Louis Blues with DEBC beer specials during the game, and keep the glass after.

Brewvolution, LLC (founders of Big Texas Beer Fest) has teamed up with the City of Murphy for Tunes, Tails and Ales on Saturday, May 14. Per the press release, the family-friendly event will feature craft beer samplings from 150 different beers from the 35 participating breweries, a crawfish boil, live music and kids activities. Beer sampling tickets can be purchased for $30 in advance, or $40 the day of. The event takes place from 1-8 p.m., with the craft beer portion at 6:30 p.m. A portion of the proceeds will go to the Murphy Chamber Scholarship Fund.

Cover photo via Zoli’s Facebook page. Got a tip for The Spread? Email us!