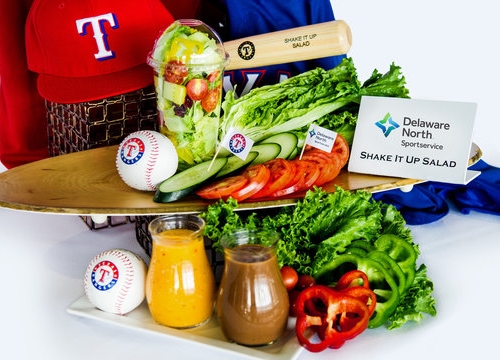 The Texas Rangers Go Vegan, And Pecan Lodge Gets Burgled.

This season’s new concession offerings at Globe Life Park strike a balance between healthy and gluttonous with some added vegan options and other intensely meaty options.

As reported by CultureMap’s Teresa Gubbins, the vegan cart will serve items like Southwest black bean burgers, vegan hot dogs and chili from its station in Section 16 near the third baseline. On the other end of the spectrum, fans can enjoy concoctions like Flaming Hot Cheetos Dogs, 12-inch chicken-and-doughnut skewers drizzled with buffalo honey sauce, and a sandwich called The Wicked Pig that’s made with pulled pork, Danish bacon, sausage, prosciutto, ham and pork rinds on a Hawaiian roll then topped with barbecue sauce and coleslaw. You can check out these items and more during the Rangers’ season opener on Monday, April 4.

In weirder news: A sign from Deep Ellum barbecue favorite Pecan Lodge was stolen and replaced with a small, phallic drawing. Per Eater Dallas, the pilfered sign was a replacement for a hijacked piece of artwork. The caption on Pecan Lodge’s Instagram refers to the NSFW drawing as a “self-portrait” of the perpetrator. No word on any replacement sign as of yet.

Close to Downtown Dallas, an outpost of Houston’s Little Woodrow’s is slated to hit the fast-rising Ross Avenue. The craft beer sports bar will be located a block away from Method Coffee in a refurbished vintage building. The Dallas location will have a full kitchen alongside a menu of cocktails, high-end whiskeys and extensive list local and Texas beers on tap. An opening is slated for spring 2016.

Over in Oak Lawn, a venture by the name of Sandwich Hag is bringing quote-unquote authentic banh mi pop-up shops between The Grapevine and Val’s Cheesecakes. Per Eater, the pop-ups are a precursor for an eventual brick-and-mortar spot. In the meantime, the first opportunity to try the banh mi takes place on Saturday, April 9, from 11 a.m. to 3 p.m. while supplies last.

Meanwhile, a new taco spot has joined Denton’s late-night dining options. Killer’s Tacos serves a variety of hearty eclectic taco options in addition to cheaper street tacos and build-your-own quesadillas. The restaurant, located right off of UNT’s campus, is now open Monday through Thursday from 11 a.m to 10 p.m., and on Friday and Saturday until 3 a.m.

In craft beer news: Bishop Cider Co. is hosting its Bishop Sweet and Sour Cherry Ciders launch party tonight at Craft and Growler. Commemorative glasses will be available with the purchase of a pint, beginning at 6 p.m. Also, Community Beer Co. is teaming up with Flying Saucer in Fort Worth for a crawfish boil on the patio on Saturday, April 2. And, finally, Rabbit Hole Brewing is debuting its Barrel Aged Rapture during the Big Texas Beer Festival this weekend, and only five gallons of the brew will be available, so guests are encouraged to visit the Rabbit Hole tent while supplies last.