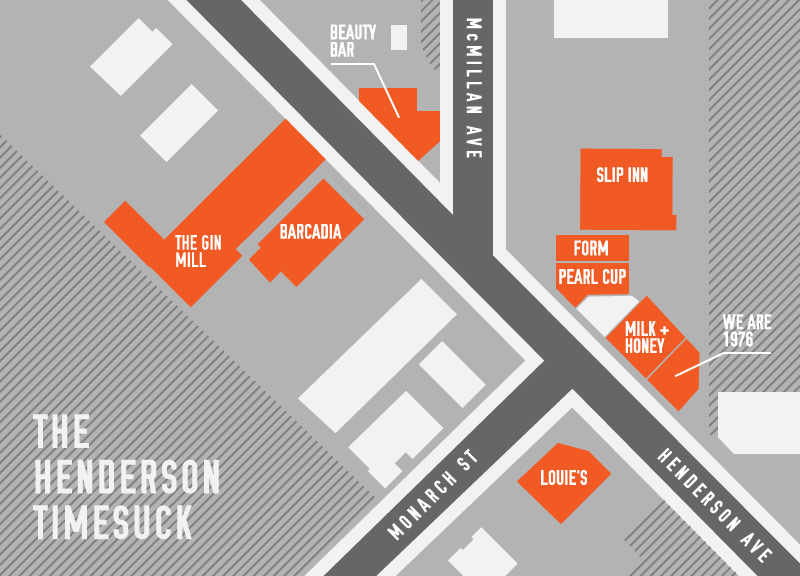 Uptown and Downtown Worlds Collide At The Most Happening Corner Along North Henderson.

If only because of the Central Expressway exit bearing its name, most Dallasites appear to at least boast a passing familiarity with the Knox-Henderson area of Uptown. Most also know that, within the area, Knox Street is the answer to all your upscale sidewalk shopping needs, whereas North Henderson Avenue often serves as the answer to dining needs.

But Henderson is so much more than that. Welcome to a world where the valet is complimentary, where there’s no shortage of happy hours and where downtown and uptown Dallas types mingle freely and comfortably alongside one another.

That’s been Henderson’s game with the young adult Dallas crowds for the past few years, actually. But, in 2012, one section of Henderson in particular has started to break out.

It’s right there at the McMillan intersection; let’s call it the Henderson Timesuck.

Calming during the day and more than just a little bit wild after dark, it’s a an area where time stands still, where distractions abound and where obligations are forgotten. A wide selection of establishments contribute to this scientific phenomenon. Here, we take a closer look at — and send out our appreciation to — the culprits behind it..

Barcadia
Peak hours: Early evening sunset.
Brooke Humphries, party legend and Dallas local, is responsible for most of a solid amount of fun that happens in Dallas late at night. Owner and operator of Beauty Bar (more on this in a minute) and the It’ll Do Dance Club, Humphries is also behind Barcadia — a half-bar, half-arcade great for groups and people-watching.

It’s the perfect place to blow off some steam, too — an inviting atmosphere with a large patio that feeds into the inside den where there is a bar against one wall and arcade games lining the others. From Centipede to Mortal Kombat, the arcade has you covered. Barcadia also serves food — noteworthy enough to take advantage of their Sunday Funday brunch.

Just remember your quarters, and don’t be alarmed by the giant Jenga games toppling over out on the deck.

The Gin Mill.
Peak hours: Before midnight on Fridays and Saturdays.
Directly neighboring Barcadia on its left is The Gin Mill (formerly known as Swig). The Gin Mill is an urban pub with the usual happy hours and brunch specials — but on Friday and Saturday nights, you can also enjoy their speakeasy lounge. The only thing is, the eclectic neo-classical design of the speakeasy can clash with the music played (typically a DJ playing hip-hop or pop). When The Gin Mill threw their one-year anniversary party, everything seemed to coexist nicely, though.

Beauty Bar.
Peak hours: After midnight on weekends and Thursdays.
When It’ll Do Dance Club opened up, some Dallasites were scared it might take some business away from Beauty Bar. But, as previously written, both venues are owned and operated by the same businesswomen.

This being so, it actually makes the dance club situation better, not worse, for Dallas.

Beauty Bar, just across the street from The Gin Mill, offers an intimate dance floor and bar. Based on the layout of the building alone, there is no way a person could enter Beauty Bar during peak hours and not bump into another person, both of them sweating from the heat of a packed club dancing long into the night.

The Slip Inn.
Peak hours: After midnight on weekends and Thursdays.
We know that the Slip Inn is kind of like, y’know, neighbor to a barred-up convenience store and a fence that separates it from the rest of the surrounding neighborhood. And, like, we know that the venue isn’t too inviting from the outside — painted black with a single door entryway that looks like it leads to a tiny closet.

But if you’ve ever ventured over there from Beauty Bar on a good night, you know also know that the line to get in is long. You’d never guess it, but the Slip Inn is a rather decent, nearly hidden gem.

All they play here is hip-hop — mainstream and indie hip-hop tracks, mostly, and highlighting any era from the ’80s to the now. The music — for sure — is nice change from the rest of what you’ll hear around the Knox/Henderson area.

You’ll be shaking your ass sooner than you think.

Form.
Peak hours: Any time after a nice cup of Pearl Cup Blend. (They do close at 5 p.m., though).
Form is a mid-century modern home shop that sells the true classics, dating from the 1930s to ’70s. We’re talking Knoll, Eames, Bertoia — all restored to mint condition.

But the best news about Form is, if you have a grown-up job, you can most likely afford the furnishings for your sleek loft apartment. Unlike some of the other vintage-restored home shops around town, Form understands your love for good design at a reasonable price.

The Pearl Cup.
Peak hours: Whenever you need a jolt.
Across the street from Barcadia is The Pearl Cup’s founding location — and the one most likely to be called home by local patrons. The Pearl Cup keeps this end of Henderson bustling throughout the day, serving up coffee and a nice selection of sandwiches and snacks.

This spot is big enough to study or meet up with a friend; they’ve got a large, clean interior, a nice outdoor deck and a small, enclosed patio, too.

But the coffee itself is enough of a reason to stop by. The Pearl Cup Girls (owners Carlene and Rita) take their craft seriously. The coffee beans are fair trade and the espresso is bold but never bitter. You can buy the coffee in bulk or enjoy your drink there. And if you’re lucky, you can catch a rare and hard-to-find coffee drink offered by single cup or French Press only.

Milk + Honey Boutique.
Peak hours: When your wardrobe is slacking.
Milk + Honey is the direct neighbor of The Pearl Cup and draws in many a passerby. There’s good reason: It’s shop owner Brittany Thomas’s second go at the female apparel game; Milk + Honey is her original Waco store, Roots Boutique, refreshed in Dallas and with even more to offer.

The shop is “cheap chic,” featuring styles like you might find in Anthropologie, only more affordable. There’s also handmade jewelry for sale — the kind most any girl would love to receive as a gift, even if it were from herself.

V Spot.
Peak hours: R.I.P.
A couple of weeks ago, we were craving the V Spot’s delicious mushroom risotto. Sadly, upon our arrival, all there was for us was a note from the landlord on the door. The V Spot’s name and info had been scraped away, along with all our dreams of wheat grass infusions.

What happened, V Spot? We were finally getting used to your kooky wait staff and off-the-menu items. We only hope you open up again soon — or that another hip vegan replacement creeps into your old spot.

We Are 1976.
Peak hours: After 7 p.m. during a special event.
There isn’t another shop in Dallas-Fort Worth quite like We Are 1976. Family-owned and operated, We Are 1976 is as humble as a business can be these days. Shop siblings Vynsie and Derek Law and business partner Jully Law have been filling the store shelves with collectible art, books and toys for about two years now.

They’ve been doing so well with their sales and workshops that they’ve even opened a second location of their thriving store, this time in Oak Cliff’s Bishop Arts District.

Every time we walk into We Are 1976, we walk out with a purchase, be it a Japanese soda or a new sketchbook. And, although the shop closes early at 7 p.m. every night, you can catch them during one of their artist receptions or special events for a late night filled with complimentary wine, creative conversationalists and an absolute grand time.

Louie’s.
Peak hours: Whenever they feel like being open or whenever you have time to wait.
The wait times at Louie’s are worth the pizza. Seriously. Ask anyone if they’ve been here and, as their eyes glint with magic sparkles, they’ll tell you tales of gourmet pizza.

The place itself is set up like an English pub with a long bar. It’s pretty dim inside there, and sports usually plays on the televisions. And, uh, that’s about it.

Operating hours are not posted nor strictly followed by the establishment, though. But if you’re a real foodie and have the patience, treat yourself to Louie’s. 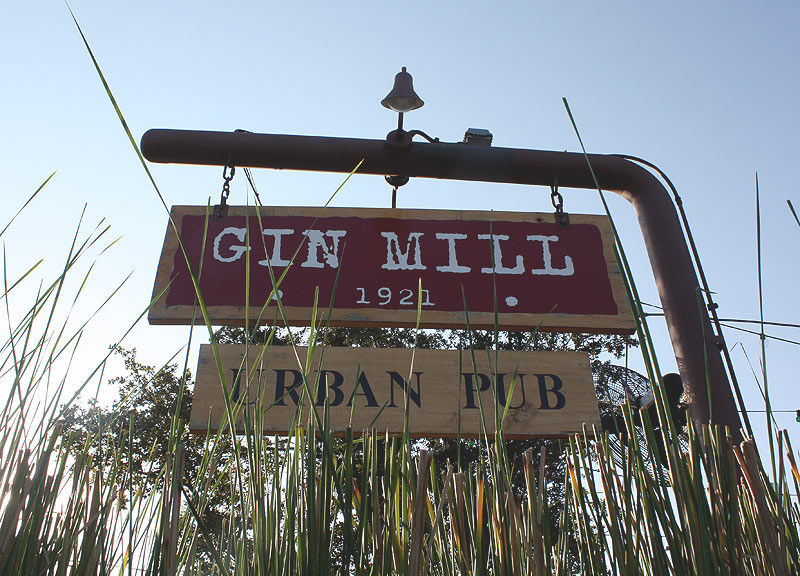 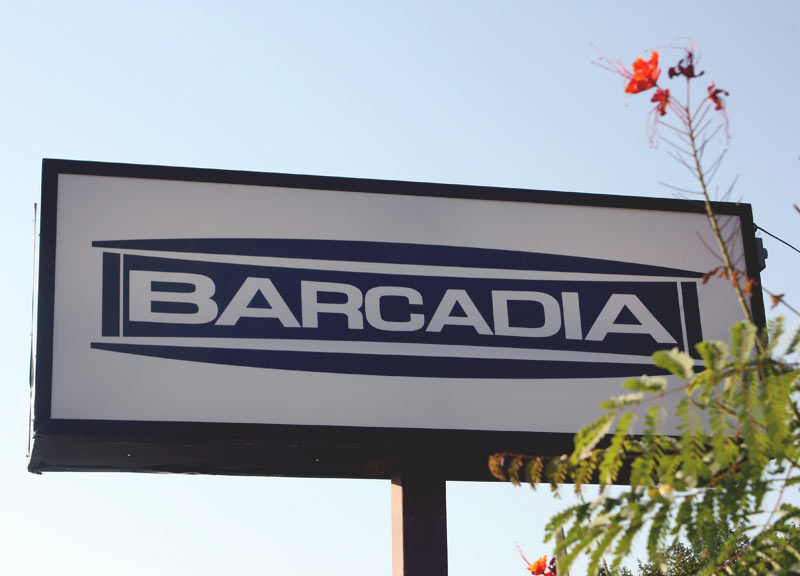 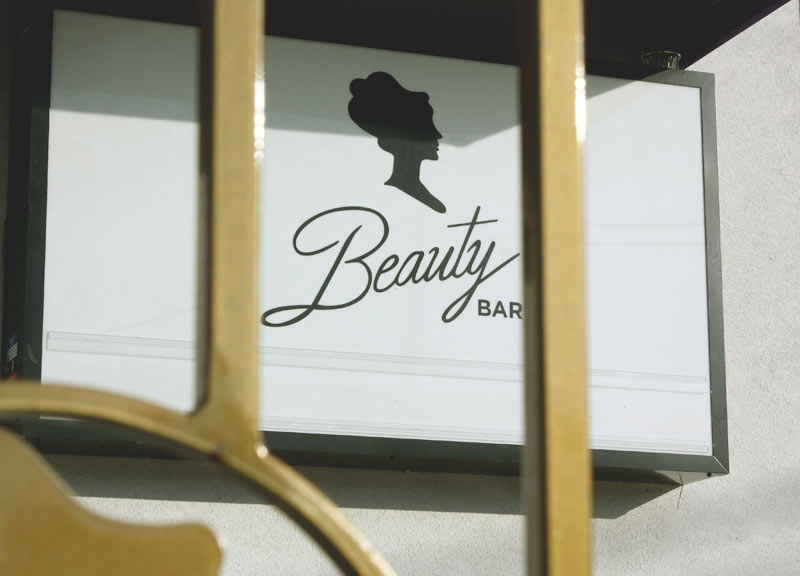 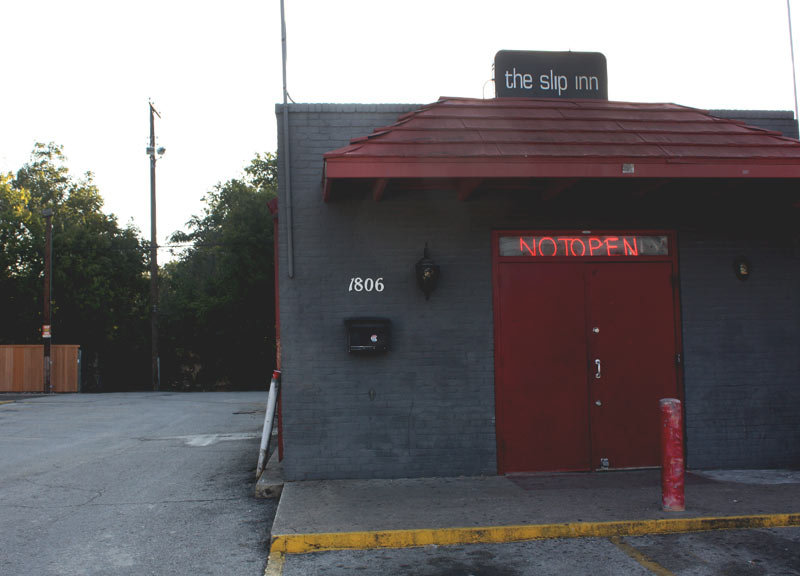 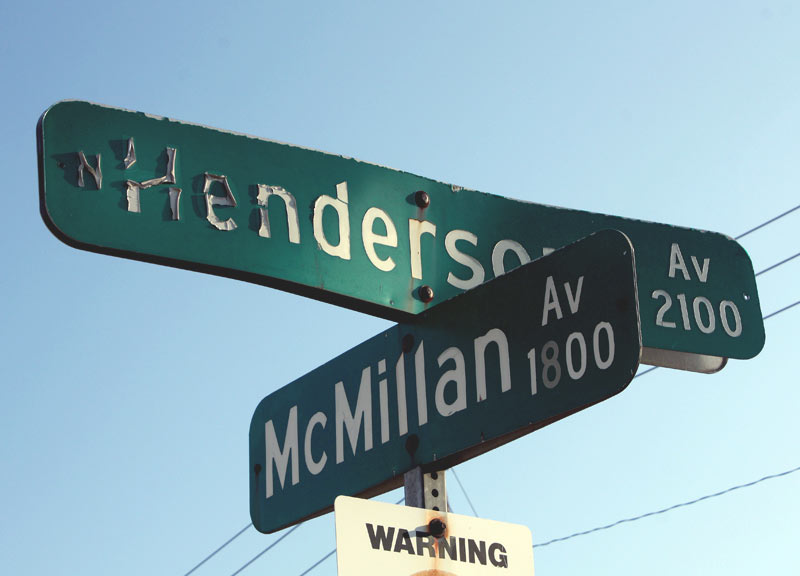 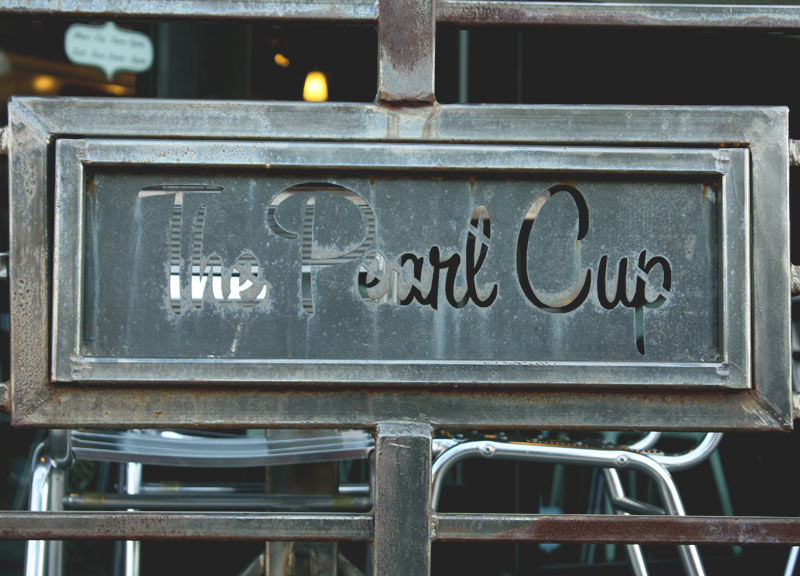 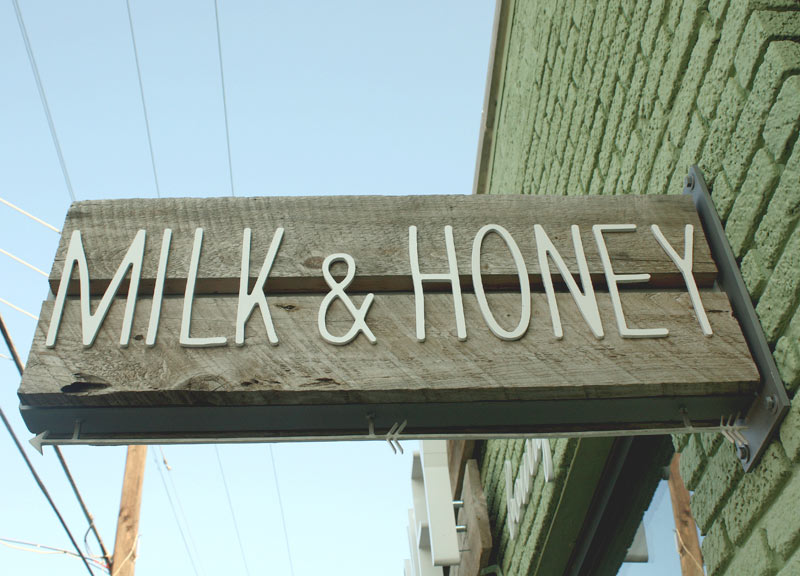 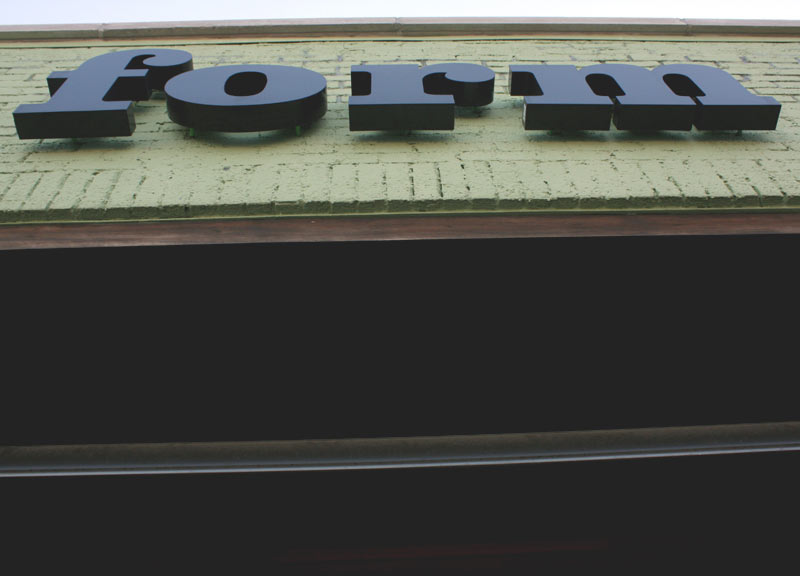 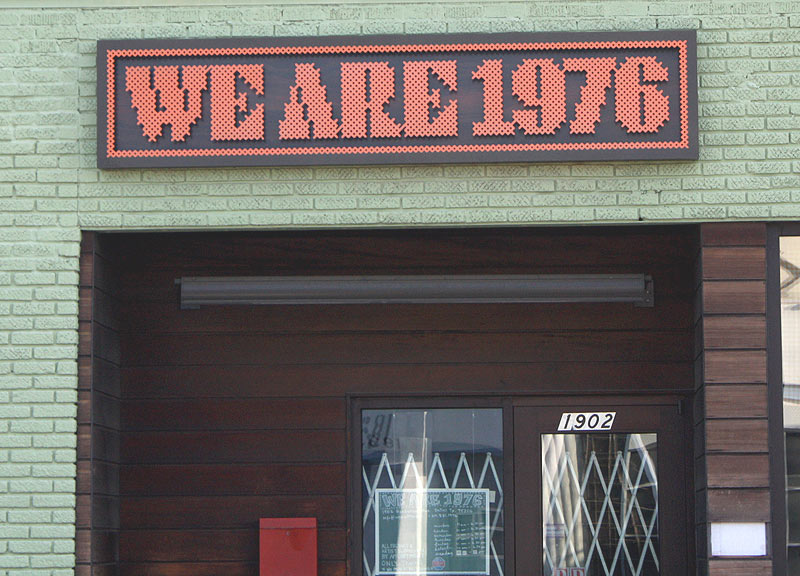 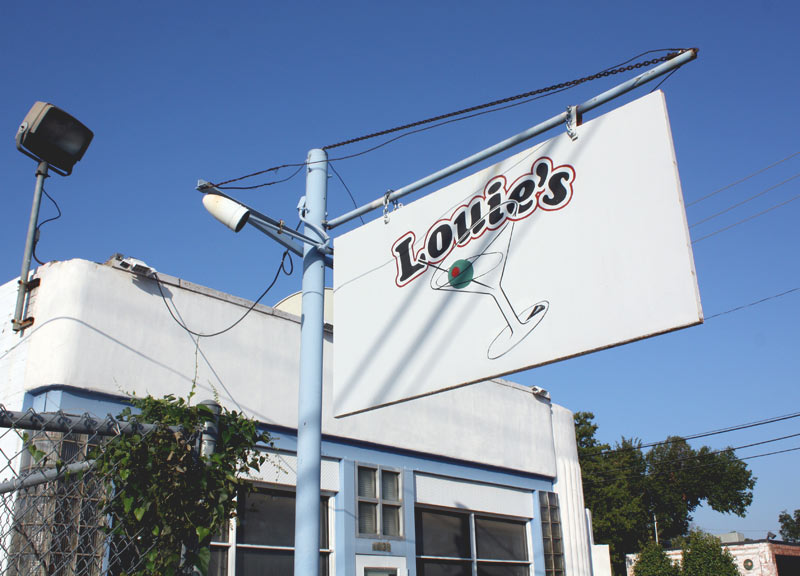