The last time the Dallas Mavericks played the Detroit Pistons, small forward Chandler Parsons had his best game of the season. He scored 32 points, shot four of six from the three-point line and helped the Mavs cruise to a victory over the then-struggling Pistons.

But his performance went largely unnoticed.

The whole NBA was abuzz with chatter surrounding that move. And, just like that, Parsons' game was an afterthought.

The very next day, the Dallas Mavericks held a press conference officially introducing Rajon Rondo and center Dwight Powell to their squad. In the weeks that have followed, all eyes have been on Rondo — and rightfully so. With Rondo's acquisition, the Mavericks finally have an all-star, floor-general point guard to help them even more convincingly compete in the Western Conference.

To his credit, Rondo's lived up to the hype. After a few adjustment games, Rondo looks to be settling in with the offense, which is starting to become even more potent than it was before after wins over the Washington Wizards and Oklahoma Thunder. Perhaps more important, he's also contributing on the defensive side of the ball — something he claims he hasn't done in some two years.

On the other hand, Parsons, once viewed as something of a savior for this franchise, has continued a season of peaks and valleys. Some nights, he looks like the jack-of-all-trades small forward the Mavs needed when they signed him in July. Other nights, he looks as if he's still working to get out of the worst shooting slump of his career. On Monday night, for instance, Parsons contributed just five points in 38 minutes, shooting 18 percent from the floor in the Mavericks' overtime victory against the Brooklyn Nets.

The fact that Rondo is inadvertently deflecting much of the media attention that Parsons would normally receive after tough games — not to mention the headlines that usually centered around questioning his $15 million salary — is likely a good thing for this team. Following Rondo's debut against the San Antonio Spurs, the media in the Mavs locker room — a group that normally swarms to Parsons' locker in the immediate post-game wake — all but ignored the small forward. He slipped out of the room after answering just a handful of questions, all of which were about his new point guard.

It's hard to think that Parsons, who garnered so much attention after his signing with this team, is able to go this far under the radar this far into the season. But considering the lack of attention he's received for his poorer outings, it's probably for the best. Because if anyone bothered to look, they'd see that Parsons' per-game stat-line this year isn't really as improved as it was anticipated it would be from his time spent in Houston.

On the rare occasion in which he's been asked to evaluate Parsons' game, head coach Rick Carlisle has continuously noted that it would only be fair to hold off on any Parsons judgment until the All-Star break has passed. With Rondo here, though, it seems any assessments on Parsons' transition has been placed on the backburner completely.

So long as the Mavericks keep up their current pace — fourth in the Western Conference with a 26-10 record and currently riding a six-game winning streak — it'll likely remain there. And the second-highest paid player on the Mavericks' 2014-2015 roster won't have to justify his salary. (Only Tyson Chandler makes more than Parsons, and only by $150,000.)

For Parsons, this is surely an ideal position to be in. Given the luxury of playing in a starting five that features a point guard who will get him the ball, a center who can back him up on defense, a future Hall of Fame forward in Dirk Nowitzki and a lights-out scorer in Monta Ellis, Parsons isn't required to be the centerpiece of this team on every night. He can recede into the sum rather than stand out as an obvious focus for opposing defenses. And his best games? They can continue to go unnoticed.

And, so long as that continues, the Mavericks should be just fine.

All photos courtesy of NBAe/Getty Images. 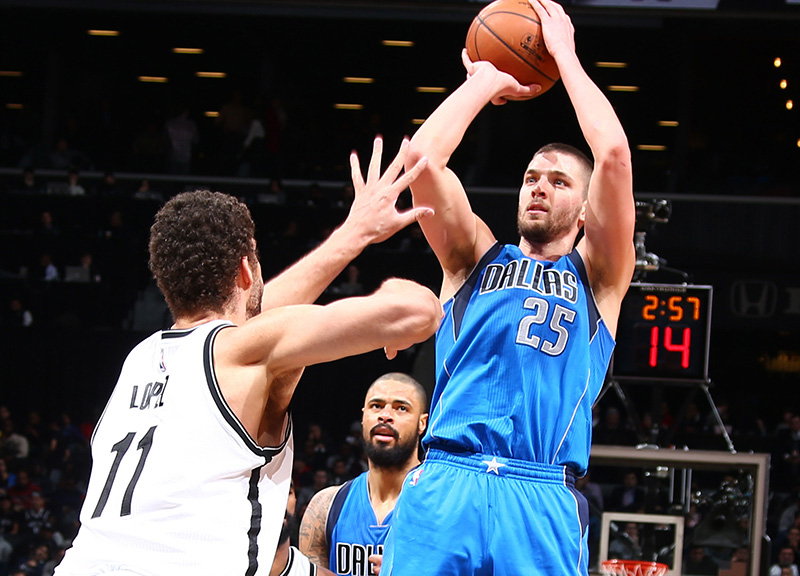