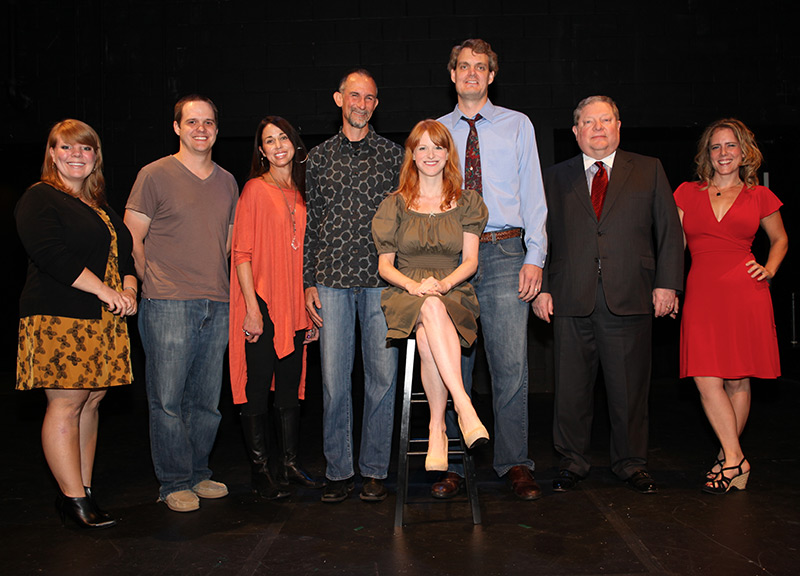 Maybe you're like me and, when you're nursing a hangover and listening to NPR over the weekends, you hear those live-recorded portions of This American Life and you think, “Man, it'd be cool if shit like that ever took place in Dallas.” Maybe you're like me and, actually, maybe you'd kind of known for a while now that something like this does exist in town. But maybe you're like me and, though you'd thought about checking out Nicole Stewart's monthly Oral Fixation storytelling series at the McKinney Avenue Contemporary before, you just hadn't. Because, hey, life happens, right?

But maybe you really should make an effort to give it a chance sometime.

Last night at the MAC, Stewart and her most loyal storytellers gathered to share the most popular stories shared during the first year of the event's run. Called simply “Oral Fixation: The Best of Season 1,” last night's affair featured stories ranging from the heart-warming and uplifting to the tragic and hilariously horrifying.

It was pretty great as a whole, too. Very This American Life-life.

That's kind of the exact idea behind this deal; much like This American Life, Oral Fixation each month asks its contributors to share stories that coincide with a chosen theme. Upcoming Season 2 themes include Baby Steps (Nov. 6), Cold Turkey (Dec. 11), Cloud Nine (Jan. 22), Playing The Field (Feb. 12), Under The Gun (March 26), Miss The Boat (April 23) and Old School (May 14). Hopeful participants submit personal essays that figure into these subject matters at Oral Fixation's brand spankin' new web site where they're received by Stewart, who curates the submissions, helps the writers edit their pieces for the stage and coaches them up on their readings.

And it's a process that seems to work pretty well. It certainly did last night at the MAC — although, granted, this was a best-of offering.

But the affair truly felt representative of such a highfalutin title: David Marchbanks shared the charming tale of his reluctant embrace of his role as a father; Willie Baronet explained his actually quite-healthy and therapeutic obsession with the homeless; Hillary Link detailed her lifelong struggle in search of an identity she that she knew existed within her all along; Mac Lower shared his bumbling-yet-surprisingly-successful efforts at wooing his high school Spanish teacher; Whitney Presley described the horrors of Latvian amusement parks; Jim Smith exposed the path he took toward finding the love of his life; and Sarah Hepola boldly revealed her experience with party excesses.

It was a wildly varied set of stories, but a rewarding and thought-provoking set, to be sure — for the audience and, almost certainly, for the performers, who could be seen figuratively lifting the weights from their shoulders over the course of their readings.

Perhaps more important about the event, though, is the way it appears to be helping Dallas cultivate a community of gifted, experienced storytellers, and one worth paying attention to at that.

Or, well, you could just become a part of this intriguing, developing crew. Stewart is currently casting for any and all upcoming readings. And with the promise this event has shown in its first season alone, now would seem as good a time as ever for someone looking to get in on the fun while this fast-rising entity remains relatively close to its ground floor.

Either way, you should be checking Oral Fixation out.