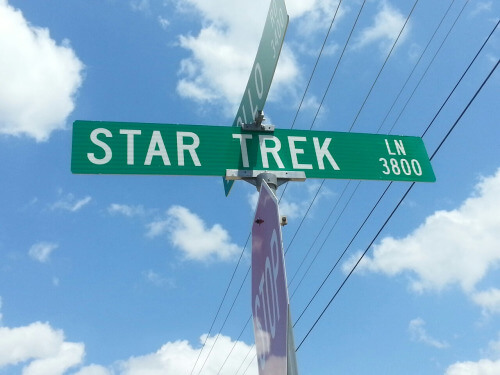 A Look At North  Texas’ Most Clever Street Name Clusters.

We’ve long been fascinated by how some of North Texas’ most prominent streets got their names. Most of the time, however, we’ve learned that it’s all pretty simple; generally, these names either have something to do with the pioneers that first settled that area or the city’s most prominent politicians from years past.

Sometimes, though, it can get a little fun — like in the case of Rockwall’s Elvis Presley Lane or DeSoto’s Canterbury Trail, which were just named by developers with a sense of humor. And while street names like Pleasant Grove’s Memory Lane, South Dallas’ Cattle Drive or the Lois Lanes in Cedar Hill, Richardson, Dallas, Plano and Euless indeed make us chuckle a bit, they’re often the lone bright spots in otherwise dull neighborhoods filled with streets named after all manner of flora.

There are too, of course, the rare exceptions where developers run wild, naming entire subdivisions after characters from popular television shows, movies or brands of cigarettes. And these ones? We gotta say: They’re great.

Here, we take a look at a few of North Texas’ most awesome street name pairings and clusters. Some of them, we imagine, you likely already knew about. But we’re willing to bet that others — like, say, a grouping of streets very much named after South Park characters — are ones that you’ve never noticed till now.

The streets in this slyly named Garland subdivision were named after the teacher, the school counselor and the bus driver characters from South Park, as well as the surnames of a couple of the main characters. Platted in 2000 by Lennar Homes, the streets Garrison Way, Mackey Street, McCormick Street, Cartman Road and Crabtree Street were named not long after the full-length South Park movie released on DVD in late 1999, although representatives at Lennar claimed they “don’t know the origin of these street names.”

Platted in 1978 by Fox and Jacobs development company, this outer-space-themed neighborhood features a Star Trek Lane. Named a year before the first Star Trek movie would even be released and nine years before Star Trek: The Next Generation began airing, the street is considered the first in the country named after the franchise. Other celestial-themed streets in the neighborhood include Jupiter Road, Apollo Road, Moonglow Drive, Aquarius Circle, Nova Drive, Centaurus Drive, Corona Drive, Aries Drive, Libra Drive, Taurus Drive, Leo Drive, Ursa Circle, Galaxie Road, Pulsar Drive, Zodiac Drive, Antares Circle, Canis Circle, Capella Circle, Scorpius Drive, Nebulus Drive, Auriga Drive and even an Alderon — which we’re hoping is just an alternate spelling of Princess Leia’s home planet Alderaan, even if that is a Star Wars reference and not a Star Trek one. Sadly, though, unlike this Star Trek-themed subdivision in California, there is no Warp Drive.

Wish Upon a Star.

Platted by Gump and Gaynier in the mid-1950s, the Midway Hills neighborhood that includes Peter Pan Drive, Princess Lane, Duchess Trail, Sleepy Lane, Wonderland Trail, Aladdin Lane, Snow White Drive, Pinocchio Drive, Cinderella Lane and Dwarfs Circles was one of the focal points of the 1954 and 1955 Dallas Parade of Homes, an event that attracted over 100,000 visitors. These days, everybody just calls these the “Disney Streets.”

Cigarette brands like Bull Durham Smoking Tobacco and Fatima Cigarettes may have been phased out by the ’80s, but streets named after these and other old-time brands live on in one South Dallas neighborhood. The subdivision that includes Kool Avenue, Camel Court, Pall Mall Avenue, Lucky Street, Durham Road, Fatima Avenue, Ripple Road and Kite Street is now even officially known as “Cigarette Hill.”

Like out in Garland, South Oak Cliff also has a metal-themed neighborhood that features streets like Bronze Way, Mint Way, Brass Way, Platinum Way, Gold Road, Shilling Way and Half Crown Drive. Also like the similarly-named Garland neighborhood, there aren’t really any banks nearby, although there are a handful of sheet metal/metal works shops in the vicinity.

Baby You Can Drive My Car.

Mansfield’s luxurious Strawberry Fields addition contains a number of Fab Four-referencing streets like Penny Lane, Eleanor Rigby Lane, Long and Winding Road, Abbey Road, Strawberry Fields Drive, Norwegian Wood Court and Sergeant Pepper Court. Oddly, there’s no Why Don’t We Do It In The Road or Blue Jay Way. There is a Blue Jay Way in Irving, though, and it’s conveniently situated near that town’s own Abbey Road, Apple Way and Penny Lane, too.

Jingle All The Way.

Like the old song goes: Here comes Santa Claus, right down Dancer Lane. And if we’re talking about this Lancaster neighborhood, he’ll continue on down Dasher Drive, Prancer Street and Reindeer Road.

Your Mom Goes To College.

Give to the Poor.

Do Not Pass Go.

Smack dab in the middle of Dallas‘ 14-season run, the Southfork Mobile Home Park platted a whole bunch of streets named after the series’ characters in 1986.

Reach For The Sun.

Fit For A King.