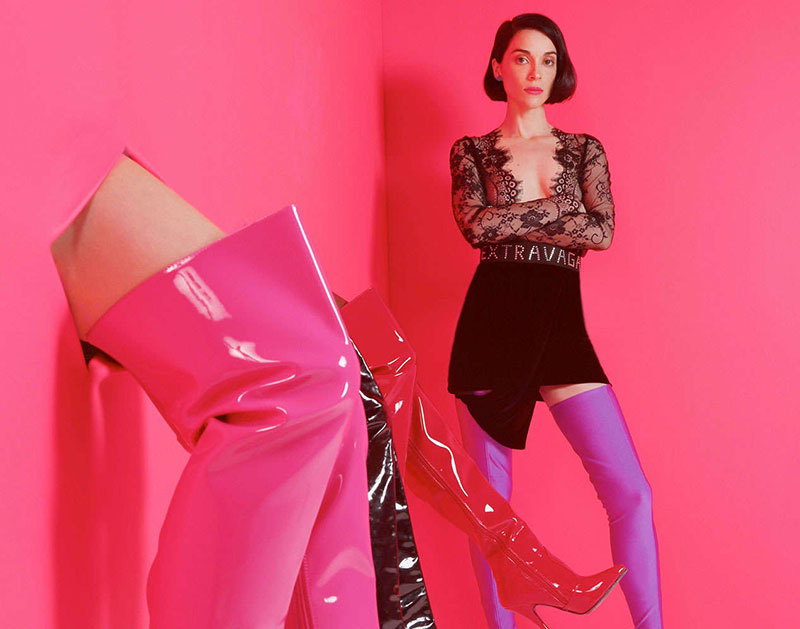 St. Vincent Continues Her Hollywood Ascent And Scores Another Director Gig, And Rapper Tay-K Gets Looks From Complex And The New York Times.

Seems the Dallas creative born Annie Clark but better known professionally as St. Vincent is continuing to spread her wings beyond guitar badassery and songwriting chops.

Last week, Variety broke the news that Clark will be directing a movie based on Oscar Wilde’s novel The Picture of Dorian Gray, ). Like everything Clark touches, the film will feature a modern twist with the title character being a woman in Clark’s version. (It’s worth remembering at this point that this isn’t Clark’s first foray into the world of film. She also co-wrote, scored and directed a short film that debuted earlier this year at the Sundance Film Festival as part of the XX horror anthology.)

But, that’s not all Clark has on her plate these days. The rock star is also gearing up for the release of her sixth studio album, which she described to The New Yorker this week as being “all about sex and drugs and sadness.” That bit of information will have to tide us over for a while, though, as Clark still hasn’t revealed the album’s name or release date.

She did, however, perform a new song while in Tokyo a few days ago. Check it out below.

🚨 new song “LA” – what a 💥💣 hoping this will be the next single. 😭💔⚡️I love it! Instant Hit. 💯The reinvention of the Saint is better then I ever expected #stvincent #tokyo #hostesscluballnighter #fearthefuture #fearthefuturetour #st_vincent #annieclark • repost from @niw.a.rie •

Another North Texas product whose legend continues to grow is Tay-K, whose song  “The Race” continued to gain steam this week. For starers, the incarcerated 17-year-old rapper was featured by Complex in two separate features last week — first in a piece that introduces the tale of Tay-K’s “The Race” to the uninitiated, and the second being a segment on the publication’s “Everyday Struggle” show with DJ Akademiks and Joe Budden where both co-hosts basically dismissed the rapper’s music and his subsequent fame following his arrest on capital murder chargers. Then, just yesterday, The New York Times’ Joe Coscarelli also ran a primer on the up-and-coming, if locked up, emcee. Why all the attention? Well, after debuting on the Billboard Hot 100 chart last week at No. 70, the song this week jumped up to No. 52.

One Dallas rapper who actually is deserving of all this publicity is Oak Cliff’s T.Y.E. who was featured by Noisey last week in a piece that proclaims the rapper an “explosive addition to the Dallas rap scene.” The story also debuted the release of T.Y.E’s again Dance Dailey-directed video for “32,” which serves as a sort of virtual guide of the rough and tumble neighborhood T.Y.E is from in Oak Cliff, as signified by its 75232 area code from which the song gets its name.

Speaking of Oak Cliff, we earlier this year highlighted the efforts being made to revitalize Jefferson Boulevard mainstay record shop Top Ten Records, and how the space will be transitioning its traditional record store business to a nonprofit community-based media library. That next chapter in the store’s life will officially kick off on Saturday, September 2, from 2 to 9 p.m. as the store celebrates its re-opening with a party boasting free beer, live performances and an introduction to the new membership and loan program.

In other music video news, we’ve got some new ones worth watching to share with you. First up, here’s a clip for the song “Noose” from North Texas punk hero Jeff Burke‘s more subdued Lost Balloons project.

Then there’s the Denton fuzz-rockers in Pearl Earl continuing their summer of proper music promotion with the finally-released video for their “Meet Your Maker” track.

Staying on the Flexinfab tip, the young emcee also release a new song called “IDC” this week, which you can check out below.

Dallas electro-pop act LEV also dropped some new music this week. The song “Search Party” is the first single from her upcoming sophomore album Glass Ceiling, which is set to release in early 2018.

Lastly, closing out this week’s news and notes, here’s an adorable kid jamming out to Post Malone’s “Congratulations.” Is this new? Not really, but it’s cute and it’s making the social media rounds and we wanted to share it.

When my favorite song comes on in the whip. [h/t @rob_lane_edits via @builtt_ford_tuff]