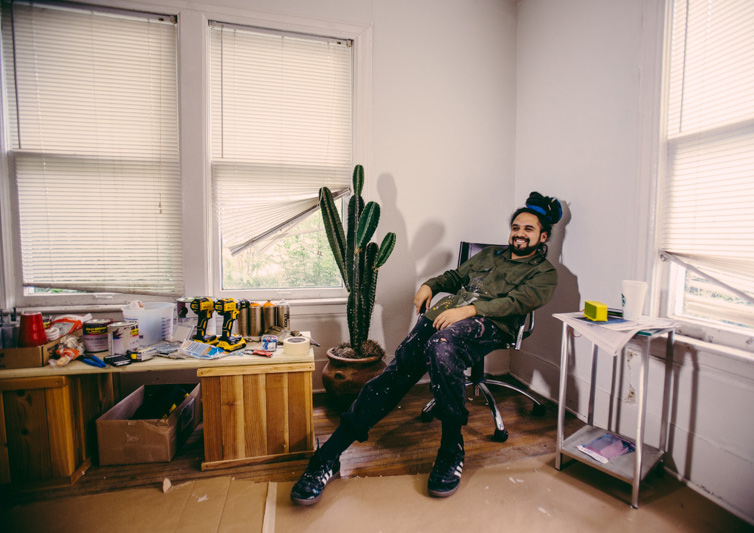 Ricardo Paniagua is a difficult person to describe.

His appearance is singular — a mop of dreadlocks rests on his head with several strands dyed an ever-changing color (currently, they're a deep blue). He constantly wears clothing stained with all colors of acrylic paint. His personality is similarly unique — most would describe him as highly spiritual and he says he is an emotionally sensitive person.

Perhaps Paniagua's eccentricities are what have secured him as a fixture in the Dallas art world for the past decade. As a painter and sculptor, Paniagua employs intricate and precise geometry to create profound or illusory pieces, a technique which has garnered him plenty of accolades and gallery exhibitions, the most recent of which is a solo exhibition of a decade of work at the Latino Cultural Center that'll run through the end of August.

The exhibition is a sort of going away party for Paniagua. Just recently vacating the studio on the bottom floor of the Continental Gin Building due to rising rent, Paniagua is in between workspaces. Almost all of his supplies are in his new studio in Cleburne, but he plans to be in Dallas for another week to finish three commissioned paintings for Chase Tower in Downtown.

For any other artist, not having a space to work out of — or even live in, as was Paniagua's case — would cause an undeniable level of stress. But Paniagua believes in relinquishing oneself to the universe. And, sure enough, the universe delivered.

A friend of Paniagua's ended up being out of town just when Paniagua was searching for a temporary homestead. So, the friend offered up his apartment. Paniagua, now with a roof over his head, was still searching for a space to paint in. That is, until he discovered the little gem of the apartment building he would be living in for the next two weeks.

On the bottom floor of the building there is a vacant apartment that had fallen into disrepair. It was essentially turned into a dumping ground for old mattresses, discarded wood trim and boxes. The ceiling in the bathroom had fallen in slightly, though the rest of it seemed in suitable shape. Paniagua, upon discovering the maligned apartment, turned the bedroom into his own impromptu studio.

With windows on two walls and an empty room and wall to work on, Paniagua had all he could ask for. The universe had, unwittingly, delivered the perfect space right into his lap. And Paniagua isn't one to eschew the universe's gifts.

Immediately, Paniagua set to retrofitting the space. He hung a plastic tarp to cover one wall and laid down cardboard to cover the ground. He brought in a table to set his supplies on, a chair and a cactus — just to make sure the feng shui was right. And, of course, he brought in four massive canvases to paint on.

By the time I had arrived at the secret studio, Paniagua had finished one of the four canvases. This one — a horizontal piece consisting of dozens upon dozens of monochromatic red lines –was for him, he said. After nearly a year of not painting, he needed to get those creative chakras flowing again.

With Dido's “Thank You” playing from a small yellow speaker, Paniagua admits it's “his anthem” — he sets to work on the first canvas of the three commissioned by Chase Tower. He paints the base layer with a beige color on the ground, very close to the canvas, as if trying to become one with its fibrous surface. It's a quick process, but he makes sure to leave none of the white texture showing through.

Watching Paniagua paint can be just as unique as his appearance or his personality. Luckily, we were able to delve into his mind to better understand what makes this painter tick.

How long have you been in Dallas making art?
Well I was born in Deep Ellum, at Baylor. So I've been here my whole life. I've always been making art, but I've been seriously making art for ten years. I was in Deep Ellum for like seven or eight years. The last studio I had there I had for about four years.

Why did you move out?
It was a combination of things. The rent was being boosted, artists were moving out. But I think the universe was telling me to leave anyways. My new studio is confirmation, because that just fell in my lap. It's kind of just pushing me out.

So how did you find the new studio in Cleburne?
This guy saw my art at my Houston gallery and he started following me on Facebook. He saw that I was looking for a new studio space and he said, “Hey man, I've got this vacant space.” And he offered it to me.

Are you going to throw a party for the new space?
Everyone's asking me to, so I probably will. There's been like a dozen so far, so that's a pretty good sign. It's pretty cool, because you can look out the front window and there are all these horses on the adjacent property.

So there's a studio in the middle of all this land?
Yeah, it's pretty weird, like Twilight Zone weird.

How did you come upon the temporary space you're in?
Well my buddy went to Chicago and they were like, “Hey, here's a space for when you're in transition.” This little space just happened to be a bonus.

Did you know about the vacant apartment when you agreed to stay here?
No, I didn't even know that it was an option. I didn't know what I was going to do. I thought I was going to be renting a little shed or something. This just kind of happened before I had to worry about it too much. I kind of lucked out. It's kind of perfect.

When are you off to Cleburne?
Probably next week. All my stuff is already there. I'm ready to go. All my tools and materials are there.

Do you think that being in a completely different environment will affect your art?
I don't know how I'm going to react yet. I have no clue. I believe the energy of the geography of wherever you're working affects your physiology as a human being. I'm not sure what energies are out there but I'll definitely be working with them. I've lived in the city my whole life. There's all this psychic energy around you and it affects your art and you can't do anything about it. But out there, there's just cows and horses. 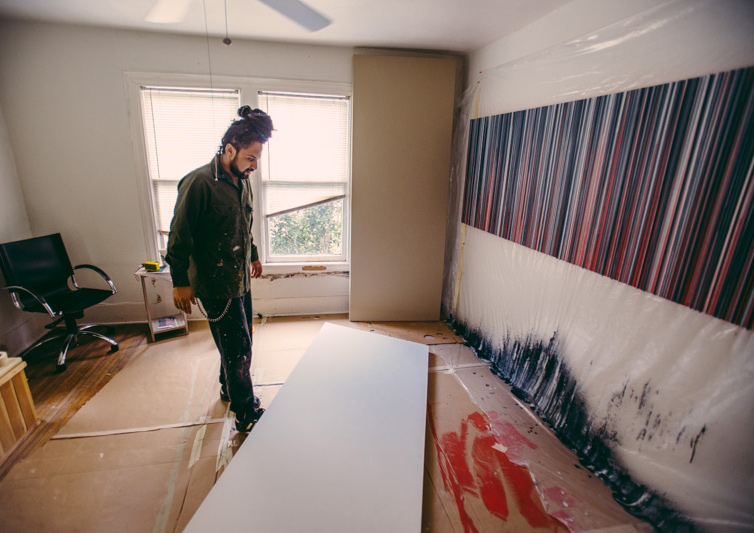 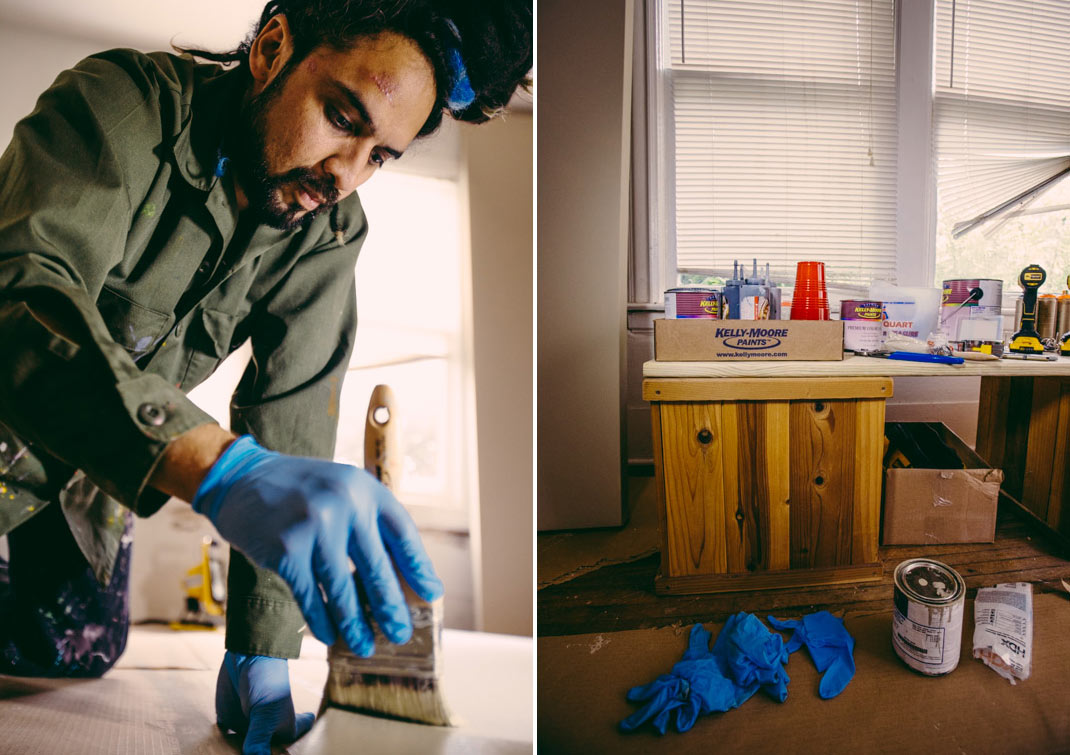 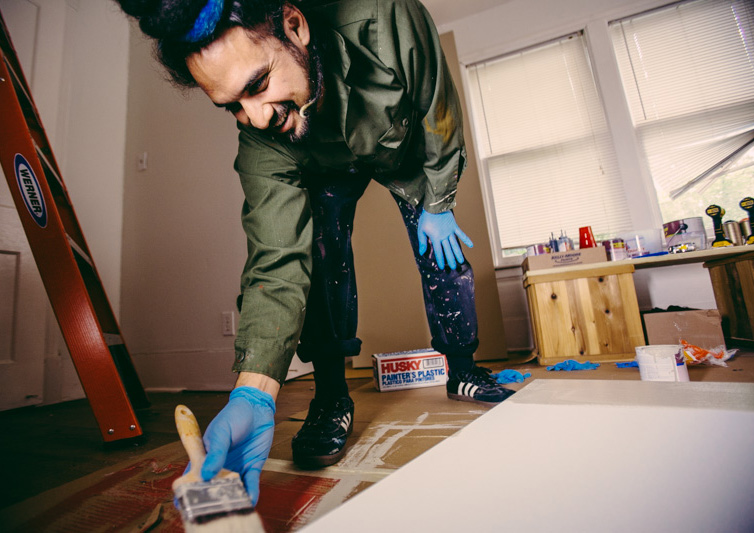 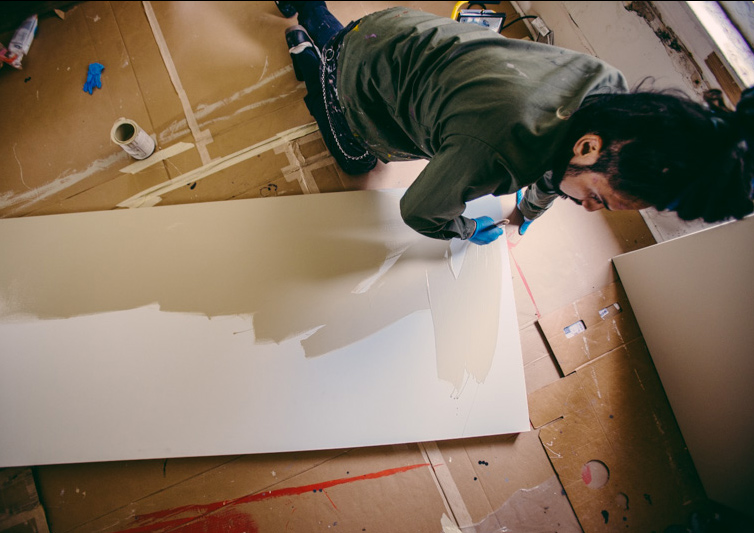 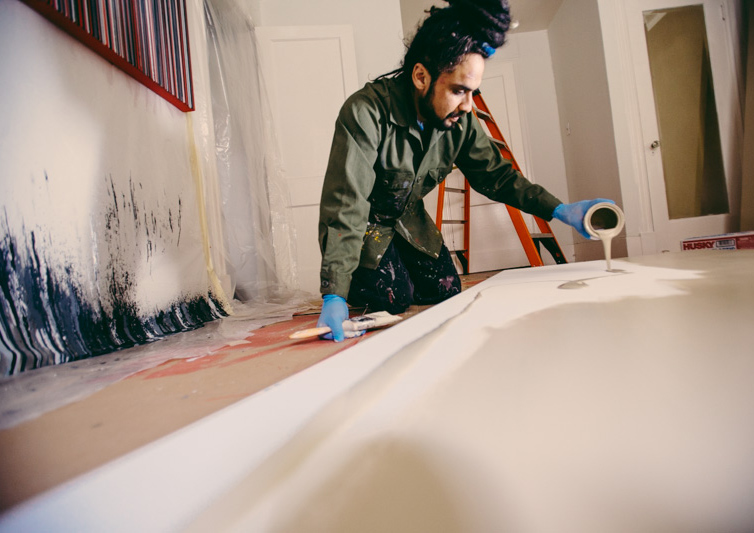 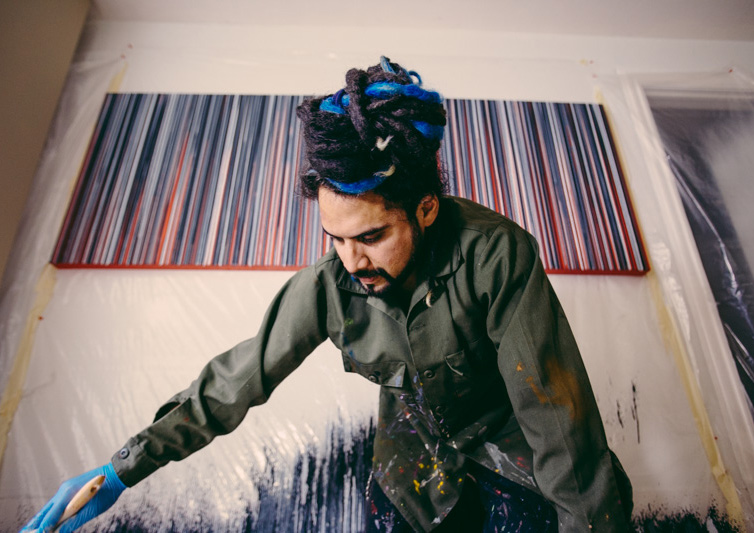 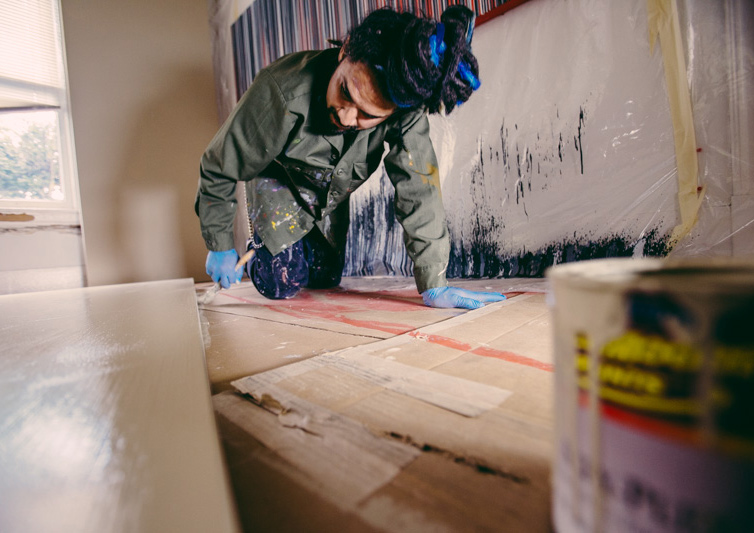 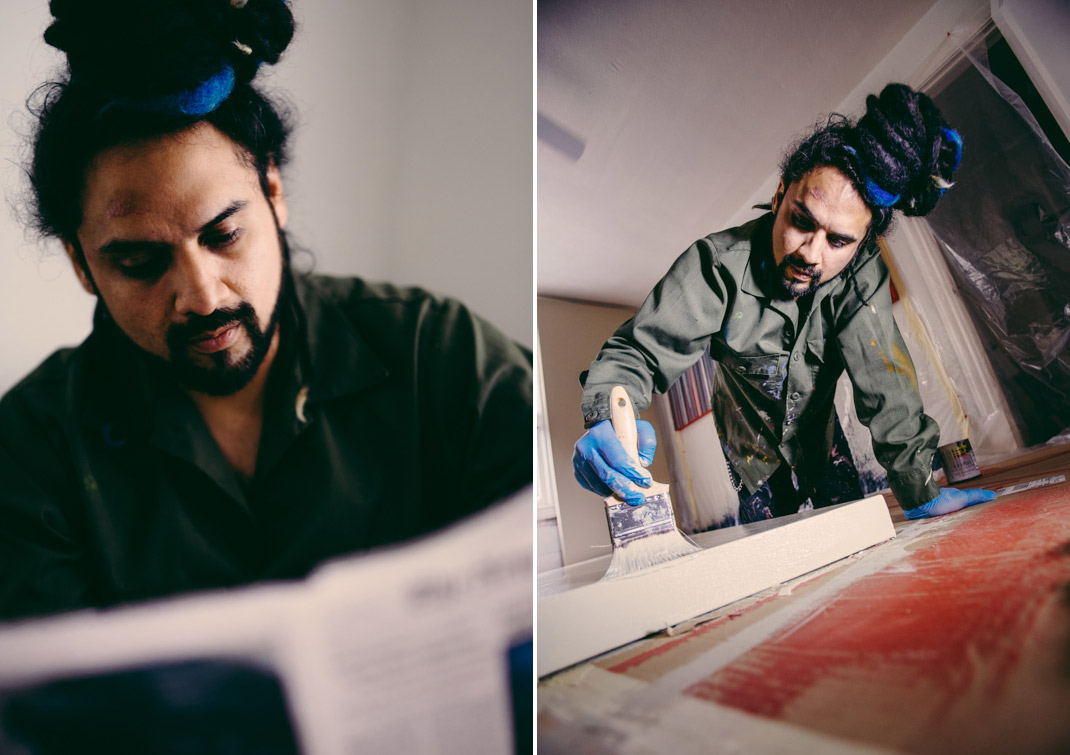 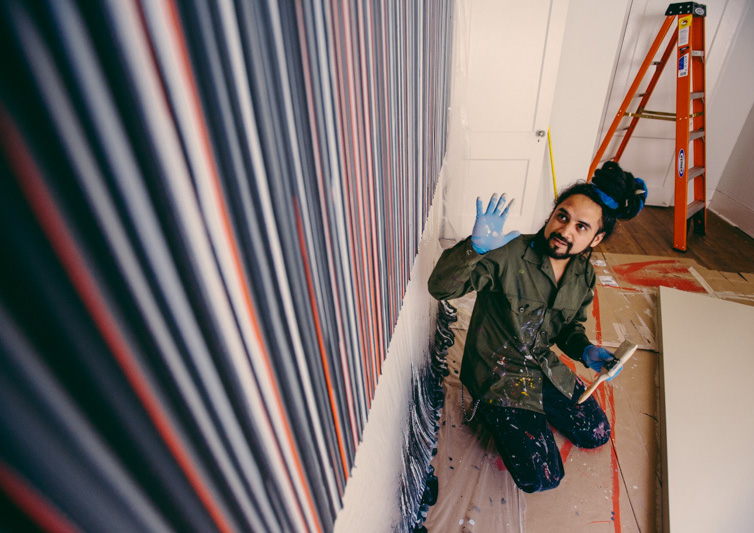 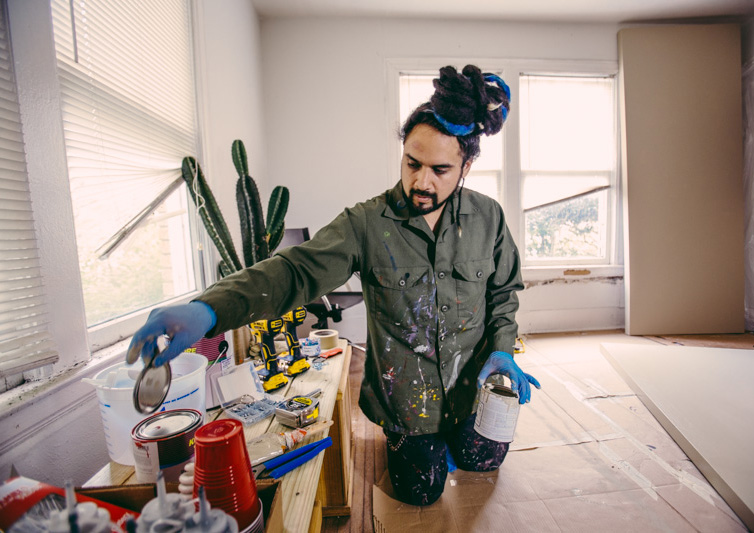 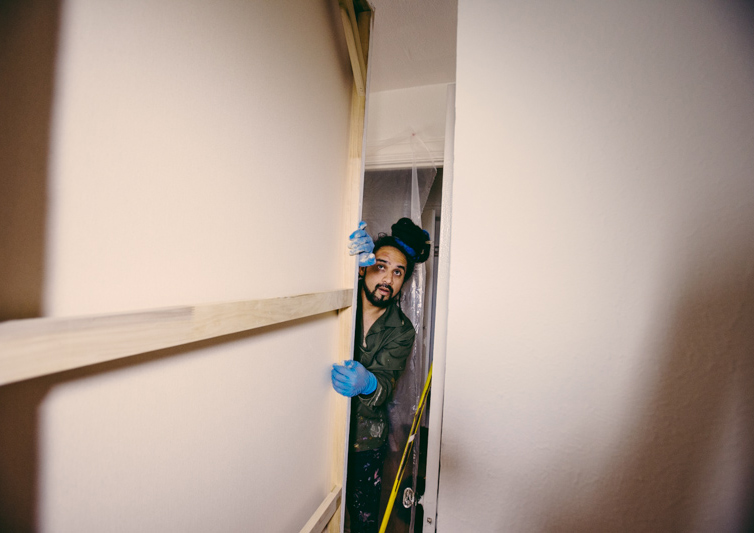 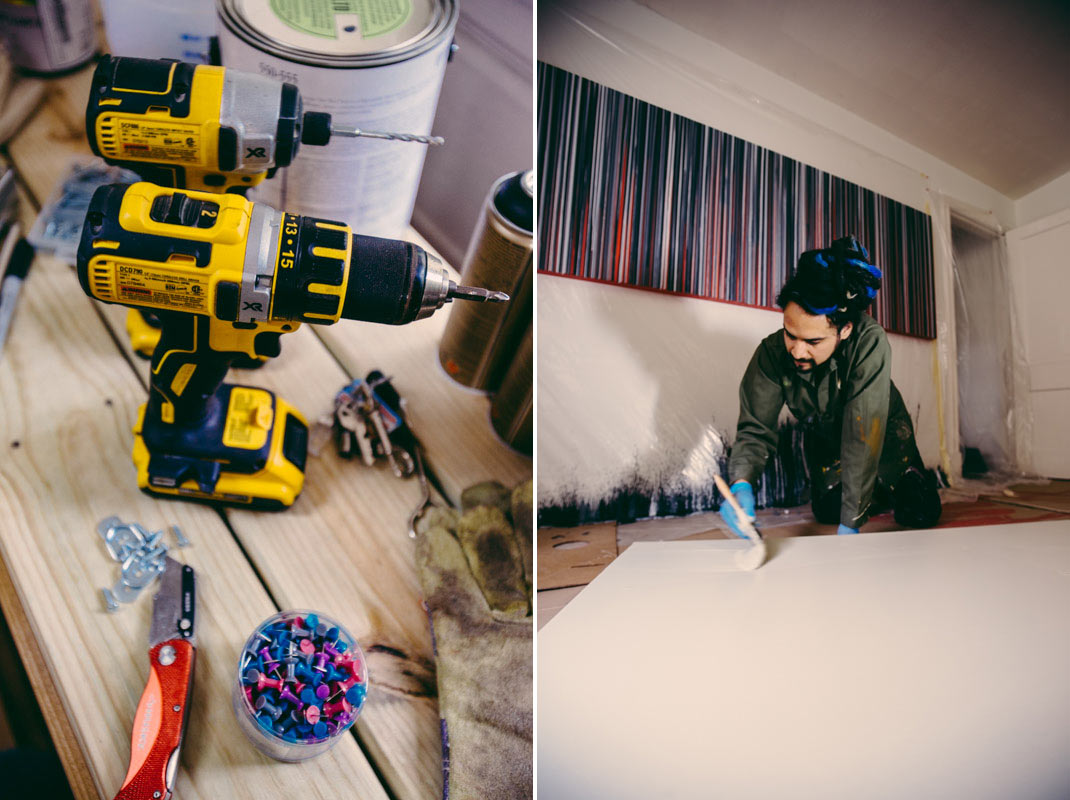 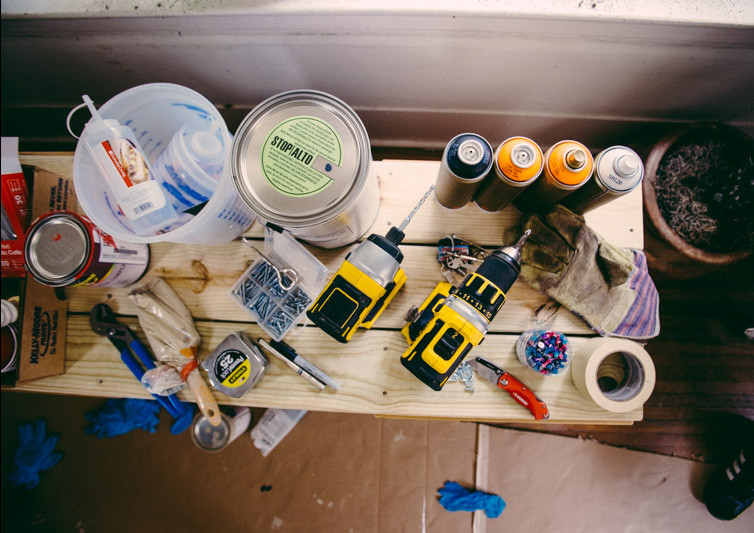 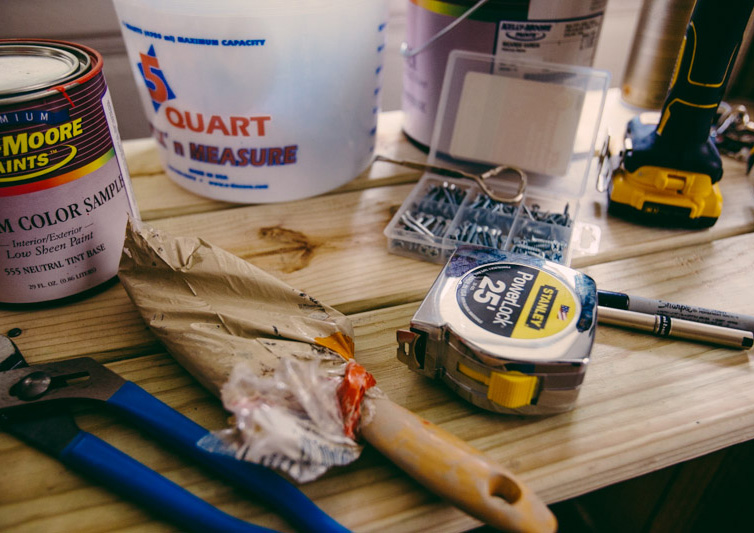 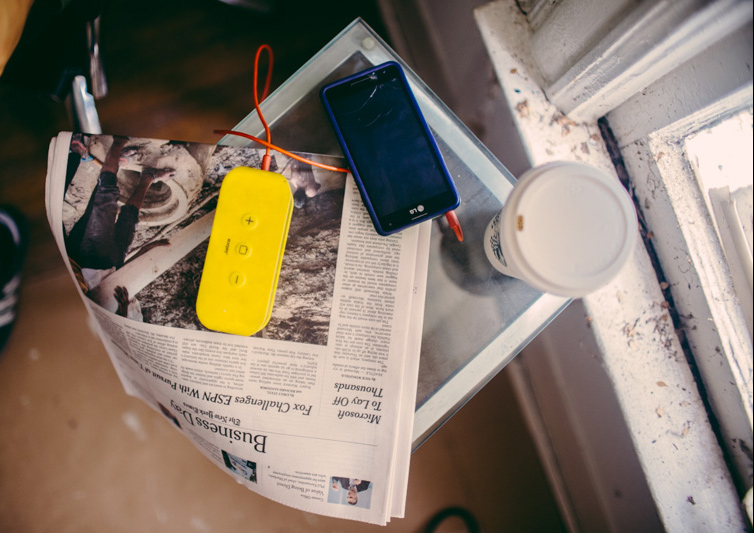 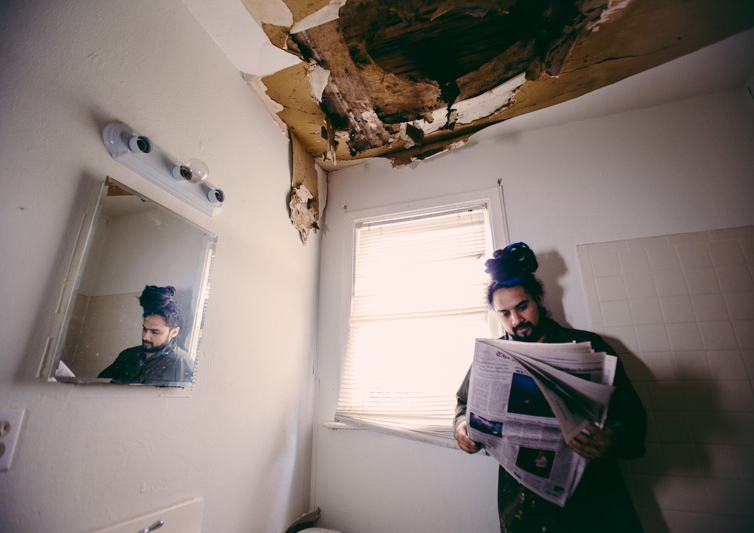 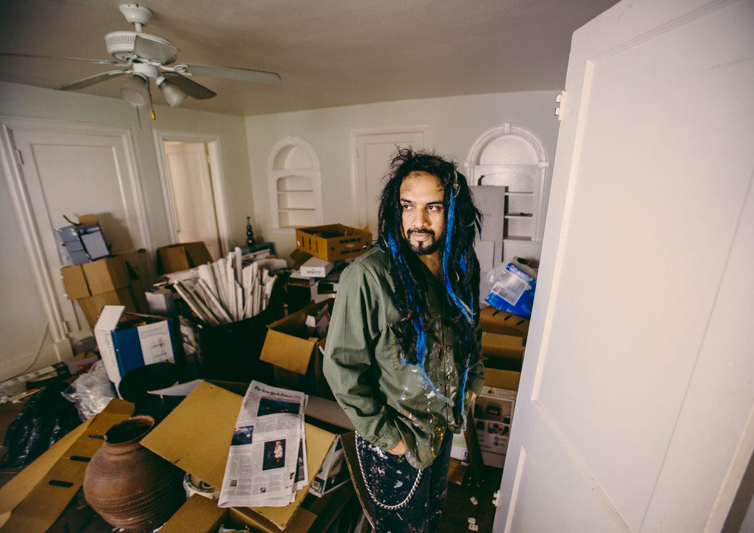 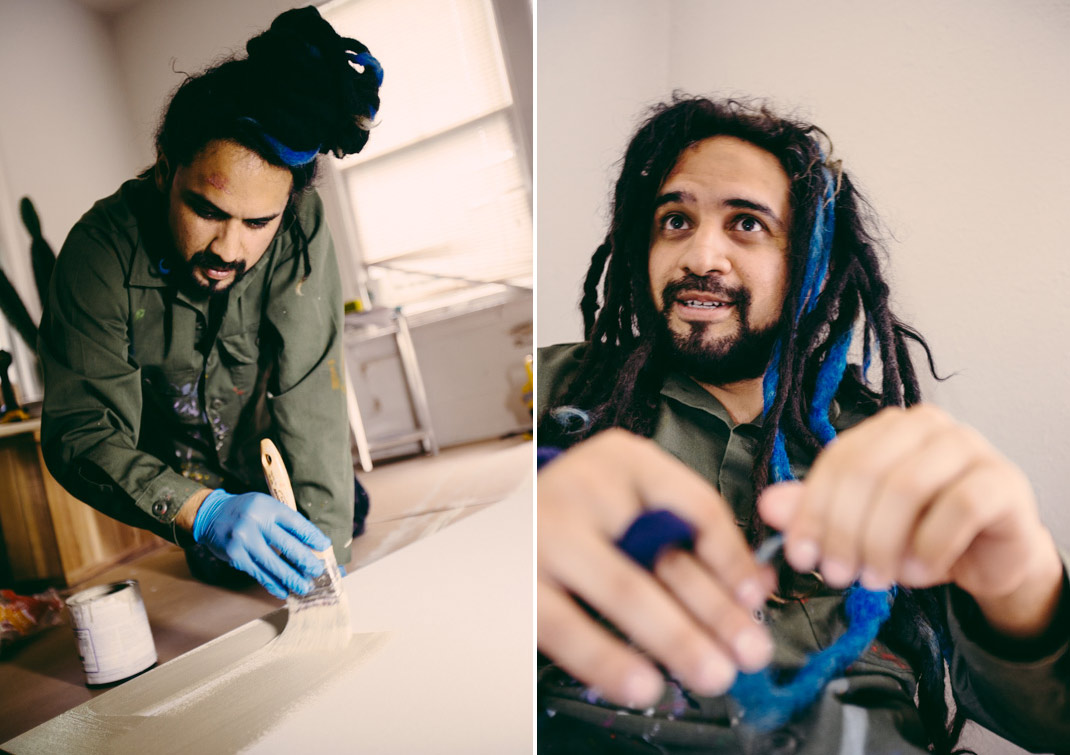