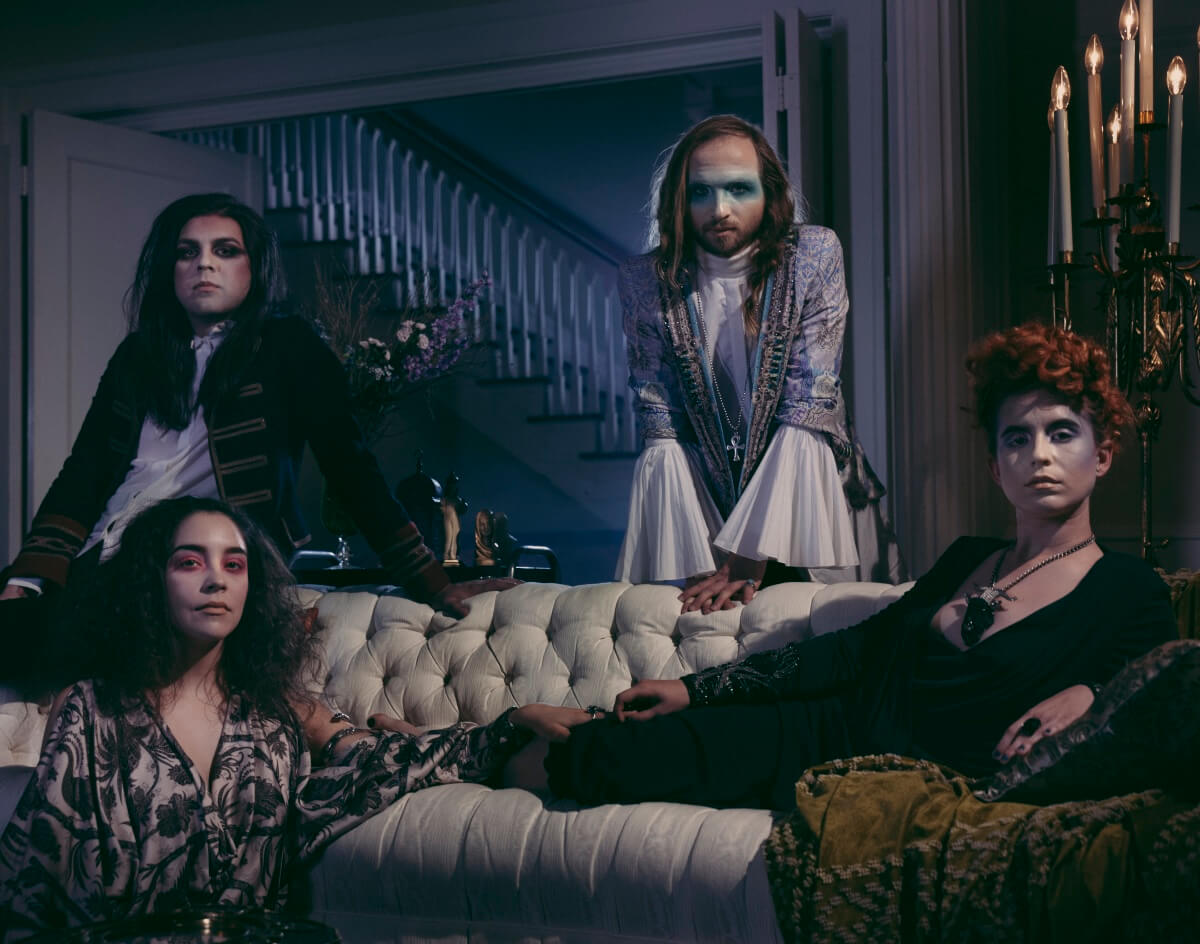 Siamese – “Chromatose.”
RIYL: Inventing a new color.
What else you should know: Siamese’s live sets exist at the confluence of set design, costumes, choreography and character exploration. But none of it would amount to shit if the band’s tunes weren’t any good. Fortunately, Siamese has cranked out some actually great glam-influenced art rock that sounds great live and even better on its debut LP that’s due out March 3. On March 4, they’ll play an album release at Texas Theatre along with choreographer Danielle Georgiou, whose “explorations in themes of gender and ritual bring an enigmatic reverence to the production.”

Dark Rooms – “I Get Overwhelmed.”
RIYL: Going to the movies.
What else you should know: That Siamese track above is said to be influenced by a character in the Truffaut film Bed & Board. This Dark Rooms track, meanwhile, is in David Lowery’s new film A Ghost Story, which just premiered at Sundance. As is the case with most of Lowery’s movies, the band’s frontman Daniel Hart scored the whole thing. Additionally, this song will be on the next Dark Rooms album, which means there’ll be lots of new Dark Rooms to look forward to in the near future.

Bobby Sessions — Grateful.
RIYL: Writing thank you cards.
What else you should know: There are plenty of entitled musicians in this town, even some that’ll publicly bitch when they aren’t selected to play some festival they feel was their god-given right to be on. But Bobby is the opposite of that. More than just one of the most humble acts around, he’s also one of the most talented. He could be bragging about all the Grammy-winning musicians and producers with gold records that contributed to his new Grateful LP, which dropped today, but, nah, he’s too darn grateful for that. He ain’t got time for first-world problems like that — a fact he talks about on this new disc’s best track. Pick up a copy at his RBC show tomorrow night. You’ll be thankful you did.

Crushed Stars – “Diminished Returns.”
RIYL: The uncertainty of modern times.
What else you should know: Since the last Crushed Stars album in 2014, the project’s mastermind Todd Gautreau has released four full-lengths with his other projects (read: Tapes & Topographies, Sonogram, Film Student). Ever busy, he’s also found to make another Crushed Stars record, too, which earns its release next Friday, February 10. Here’s an early taste.

Kirby Brown — Out of Exile, Pt. 2.
RIYL: Living forever, learning how to fly high.
What else you should know: A couple years ago, North Texas ex-pat Kirby Brown ventured out to Muscle Shoals with producer Beau Bedford and some Texas Gentlemen to record at the legendary FAME studios. Starting a few months ago, those recordings started being released as a trio of EPs, the second of which came out today. Like anything this crew touches, it’s exceedingly well done. — CG

Fishboy — Commutes.
RIYL: Multitasking.
What else you should know: With every new Fishboy album, you get some sort of new gimmick. This one’s no different. He recorded it in his car while on his hour-long commute to work in Dallas last year. For safety reasons, he says he downloaded various apps that allowed him to keep his hands and eyes on the road while recording. It’s more rough and raw than his other records — including, presumably, his upcoming Art Guards LP due out later this year. But, he says, the fact that Bandcamp is donating sales to the ACLU today was reason enough to go ahead and put it out.

David Morgan – “MIA” (feat. Devan Bernard).
RIYL: Making new friends but keeping the old.
What else you should know: ‘Member The Mohicans? When they came out in 2010, they were among the first of Dallas’ current generation of hip-hoppers doin’ the damn thing. They’ve been dead and gone for a bit now, but half the duo, David Morgan, has been putting out new material on his own the past couple of years. Here, though it’s under just his name, he’s joined on the track by his old partner Devan Bernard for pseudo-Mohicans reunion.

Teenage Sexx — “Going Home Again.”
RIYL: Driving up I-35.
What else you should know: Like Loafers, which this trio put out a split with early last year, these punks are from Waco, but moved up to our neck of the woods in 2016. That means it’s now cool to put fine garage tunes like this one, from an upcoming EP, in our local music column.

Pool Lights – s/t EP.
RIYL: Swimming after dark.
What else you should know: Like that Siamese record way up top, this debut EP from new Dallas trio Pool Lights was produced by Alex Bhore, whose website shows a whole bunch of upcoming records releasing this year. And, like the Fishboy stuff up there, this one wasn’t initially intended for release today, but was rushed out because of that whole ACLU donation thing. The players are familiar faces to say the least – Shawn Magill, Steven Visneau and Stephanie Casey — and that skill shines through well here.

BNQT – “Restart.”
RIYL: The Sweet.
What else you should know: As we mentioned in this week’s White Noise column, BNQT is the new “supergroup” consisting of the Midlake guys as fronted by a rotating cast of indie rockers of note, including Ben Bridwell (Band of Horses), Alex Kapranos (Franz Ferdinand), Fran Healy (Travis) and Jason Lytle (Grandaddy). A full-length is due out April 28.

House Harkonnen — Vol. 5.
RIYL: Time capsules.
What else you should know: Another holdover from our White Noise column is this new old House Harkonnen EP. To recap: “House Harkonnen’s newest release was recorded a decade ago for Atlantic Records, then shelved by the major label not long before the band was abruptly dropped from its roster. Ten years later, Denton label Do For It Records was cleared to release the album digitally.”