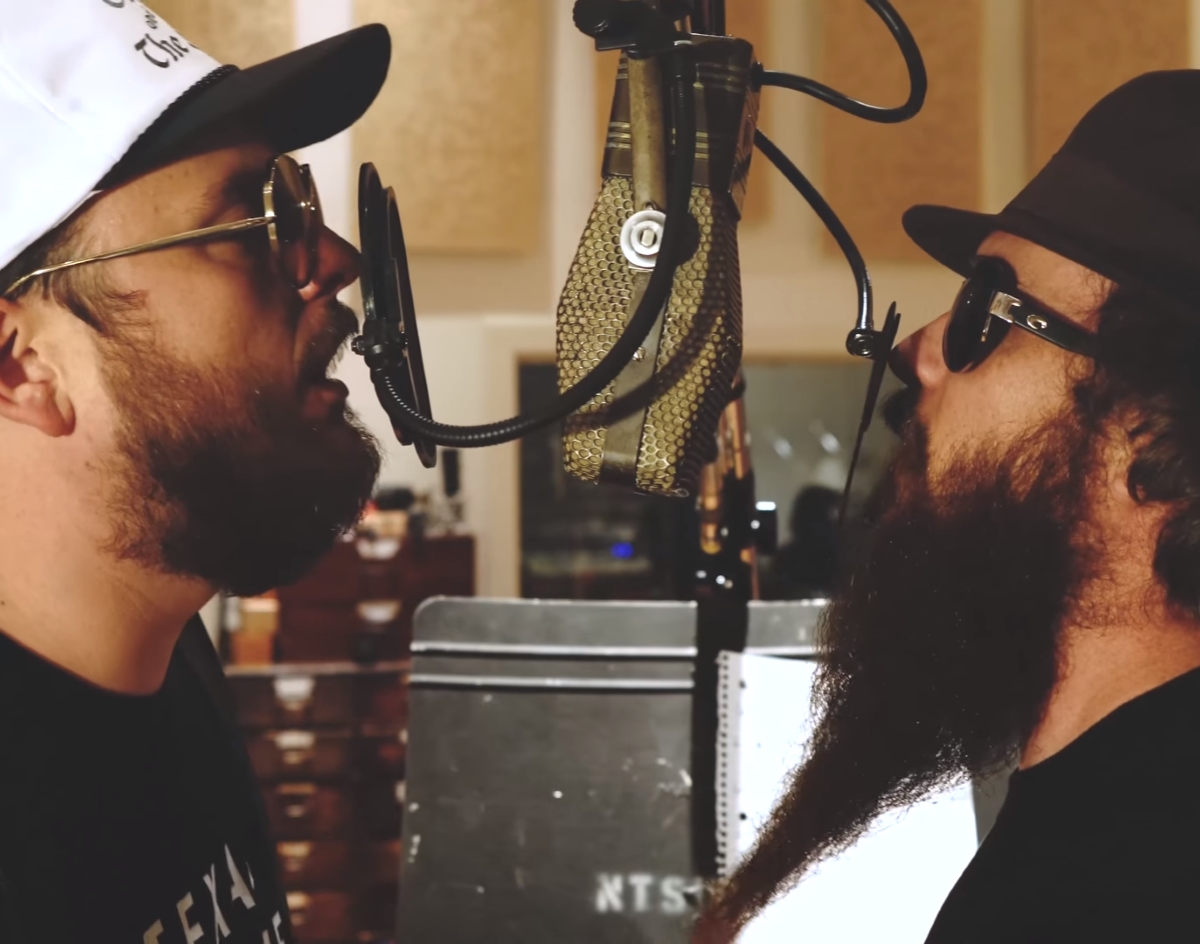 Paul Cauthen and Cody Jinks – “Black Hole Sun.”
RIYL: Striking a Jesus Christ pose.
What else you should know: It’s somewhat remarkable that two of the best voices going in modern country music both hail from North Texas. Those voices came together yesterday at Argyle’s Echo Lab studio — where Cauthen is currently working on his sophomore solo record with producer Beau Bedford — to pay their mutual respects to the late, great Chris Cornell by covering Soundgarden’s “Black Hole Sun.” It’s a pretty straightforward take on the massive Soundgarden single, solely accompanied by Bedford on piano. But it’s effective nonetheless – especially the lyric “No one sings like you anymore.” Oh, and Mr. Jinks wasn’t done there; he also did a solo acoustic cover of Audioslave’s “I Am the Highway” yesterday as well.

Lord Byron — We Kill Cowboys, So Death Rides A Horse.
RIYL: Rapping to the beat of your own drum.
What else you should know: The latest full-length from Lord Byron premiered yesterday via tastemaking hip-hop blog Passion of the Weiss. As they point out, the record features production from two other talented locals in Ben Hixon and Norvis Junior, among other key collaborators. It’s an interesting listen, and substantially more accessibly than Byron’s sounded in the past.

Siberian Traps – “Outtasight.”
RIYL: Feeling it in the air tonight.
What else you should know: With their last LP, the Nashville transplants began to turn a corner from their janglier Americana sound in favor of The Fort Worth Sound™ — that fuzzy, retro-leaning pop rock thing pioneered by Son of Stan. With its follow-up, the forthcoming Indicator, the band steers even further that direction, bordering on Phil Collins territory. Can’t say we’re mad at it.

Alsace Carcione – “A Tribute to My Mother and Grandmother.”
RIYL: Yo mama.
What else you should know: Something we all forget as we’re posting pictures of ourselves hanging out with our mothers on Facebook for Mother’s Day is how that’s kind of salt in the wounds for people that have lost their mothers. It can be a tough day to be on social media for them, and if that’s something you relate to, this song about Alsace losing her own mother might be somewhat cathartic. Or maybe it’ll make your day even more emotional. It’s a tough thing.

Saudade Sisters — Wrong Ones.
RIYL: The infinite sadness.
What else you should know: Saudade is an interesting word. In fact, here is a 40-minute podcast trying to explain its meaning. In short, it’s a Portuguese word that doesn’t have a direct equivalent in any other language. In English terms, the word describes “a melancholy nostalgia for something that perhaps has not even happened. It often carries an assurance that this thing you feel nostalgic for will never happen again.” A sort of sadness that makes you happy, in a sense? Indescribable though it may be, the term is perfectly befitting of the pleasant-but-sorrowful collection of tracks from the duo Jena Pyle (Sundae Crush) and Claire Morales (Claire Morales). Rejoice, it’s officially out today!

The Brehms — “Holiday”
RIYL: Finding your beach.
What else you should know: You know those eye-rolly-but-extremely-memorable Corona commercials where people are in their office or wherever and then they crack a Corona and, in their minds at least, they’re sitting on a gorgeous Mexican beach? This new single from jazzy husband-wife pop duo The Brehms is kind of like the aural equivalent of that. Stephanie, the band’s singer, tells us it was written at a time where the couple really wanted to go on vacation to a beach but didn’t have the means. “The beach is our happy place for relaxation and connection (like many people), and we hope this song will provide a bit of an escape for listeners — especially in this tumultuous, political climate,” she says. “Sometimes you need a break in order to fight the good fight.”

Selena Gomez – “Bad Liar.”
RIYL: Starting conversations when you can’t even finish them.
What else you should know: The first and last things you need to know about Gomez’s new single? It samples Talking Heads’ “Psycho Killer,” and she did such a good job with it that David Byrne gave her an enthusiastic thumbs up. On Twitter, he wrote, “I really like the song…and her performance too. #selenagomez #BadLiar #psychokiller.”

Fishboy — Art Guards.
RIYL: Living the dream.
What else you should know: It’s a new Fishboy album, which means it’s a new concept album! I think it’s his sixth one in a row, if I’m counting right. Unless you’re also counting the rock opera from 2007? In that case, make it seven. Anyway, like 2011’s Classic Creeps, this new album is about a bunch of separate but interconnected characters. Depending on the package you purchase, it also comes with a giant book of hundreds of paintings of the characters and follows the album’s story.

Mr. Carter Davis – “Hotels (Tk).”
RIYL: Being a Mac.
What else you should know: After traveling the country last year, recording demos for his upcoming album at various Apple stores, Davis has finally started dropping the studio versions of those tracks. This well-made inde-pop gem is now polished and ready for a spot in a future iPhone commercial.

Ronnie Fauss – “Swingin’ Doors.”
RIYL: Reinventing the wheel.
What else you should know: I started this week’s post with a cover, so I guess it’s fitting that I’ll end it that way, too. Here, the New West-signed Fauss is covering Merle Haggard’s “Swingin’ Doors.” In an interview where Fauss says he also plans on including covers by Dylan, Uncle Tupelo and Okkervil River on his next record, he admits that his motivation behind doing covers is never to improve upon the original, but to do something different with it. He achieves that with this one, taking its laid-back country shuffle and livening it up quite a bit. It’s certainly not better, but it is different enough. I’ll give him that.