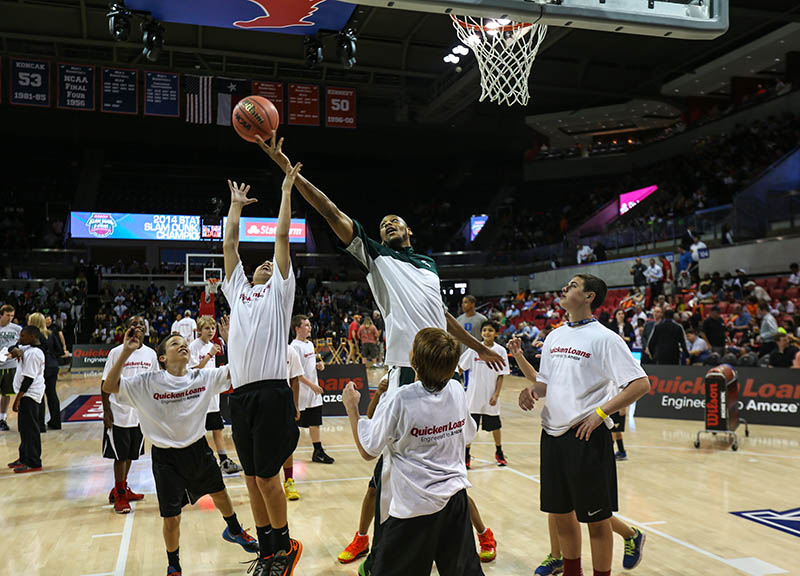 The newly renovated Moody Coliseum has played host to a staggering amount of spectacular, high-caliber basketball all season long thanks to the Southern Methodist University's men's basketball team and its American Athletic Conference opponents — a group that includes a then No. 9-ranked Louisville and a Final Four UCONN team, among others.

Last night was no different.

Before Moody hosted the 2014 College Slam Dunk & 3-Point Championship featuring some of the nation's best shooters and highest flyers, the hometown crowd watched as the Mustangs lost a close NIT Championship game to the University of Minnesota 65-63 on the jumbo screens.

It was a downer, sure. But the event that followed was definitely an exciting one.

Immediately following the game, the contest was underway with the men's and women's three-point contests. Baylor's Brady Heslip and Louisville's Shoni Schimmel won their categories, with sharp-shooter Schimmel winning a final showdown versus Heslip.

The night's dunk contest featured a variety of antics and flash, too. Highlights included Wichita State's Cleanthony Early flying over the three-point contestants while they took selfies, Florida Gulf Coast's Chase Fieler pretending to pull a hamstring only to pull off his jersey and reveal a Dunk City/Superman T-shirt and Michigan State's Adreian Payne having all the contestants fall like pins after bowling the ball toward them following his dunk.

The whole thing made for quite the display. Payne showed off a staggering vertical leap throughout all his dunks while putting on a show before each dunk — making him the obvious arena favorite as evidenced by the crowd's boos when he barely missed the final.

The crowd would eventually get over any resentment over Payne's omission, though, as Baylor's Cory Jefferson and Eastern Kentucky's Marcus Lewis (who was the “State Farm Dark Horse Dunker” after winning a chance to be a part of the night) faced off in the finals.

Lewis, despite his underdog status, made a strong case for the championship after a reverse flog-splash dunk. But Jefferson rebutted with a Jordan-esque dunk from the free-throw line that seemed to put an end to the competition — both according to the crowd and the special guest judges that included former Dallas Mavericks coach Avery Johnson, Dallas Stars legend Mike Modano, Dallas Cowboys head coach Jason Garrett and future Hall of Famer Jason Witten.

In the end, though, Lewis took home the title with a Jordan-esque dunk of his own that featured a full extension over a hometown friend.

NCAA Player of the Year Doug McDermott laughs it up with Creighton teammate Ethan Wragge, who competed in the three-point contest

Florida Gulf Coast's Chase Fieler attempts a dunk in the first round of the night's contest.

Wichita State's Cleanthony Early soars over the three-point contestants as they take selfies.

Bradley's Walt Lemon Jr. completes a windmill dunk after snagging the ball from his school's mascot.

Michigan State forward Adreian Payne dunks two balls at once in the second round of the competition.

Baylor's Cory Jefferson's head nearly touches the rim during his dunk in the second round.

Eastern Kentucky guard Marcus Lewis wows the crowd with a reverse flog-splash dunk to send him to the final round.

Eastern Kentucky's Marcus Lewis dunks over a hometown friend in his final attempt of the night to seal his championship.

Lewis and Jefferson pose for cameras after the slam dunk contest. 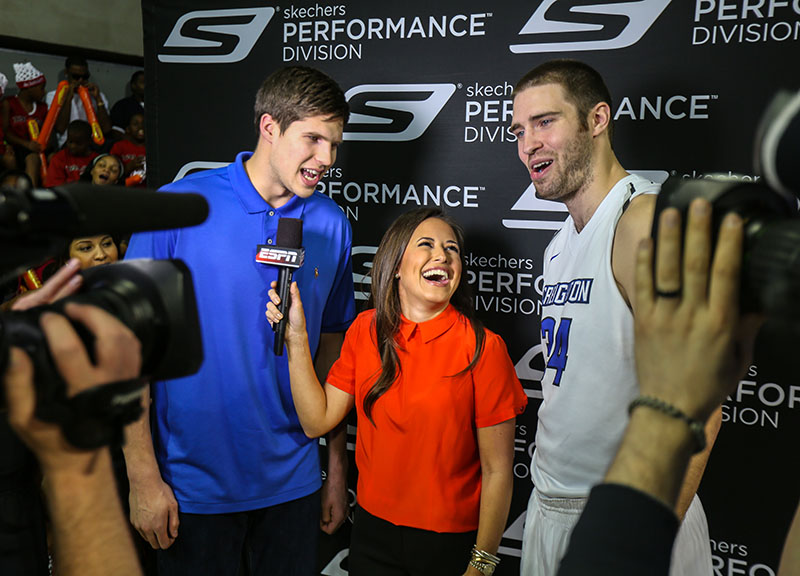 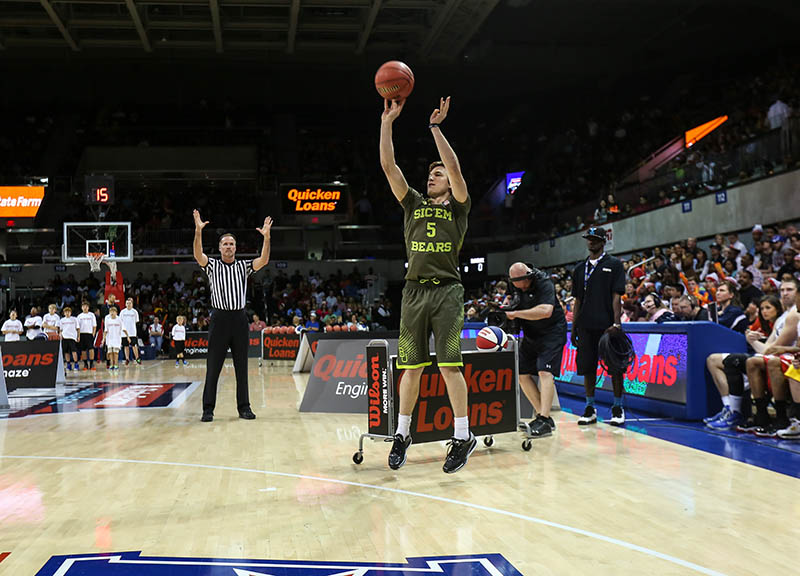 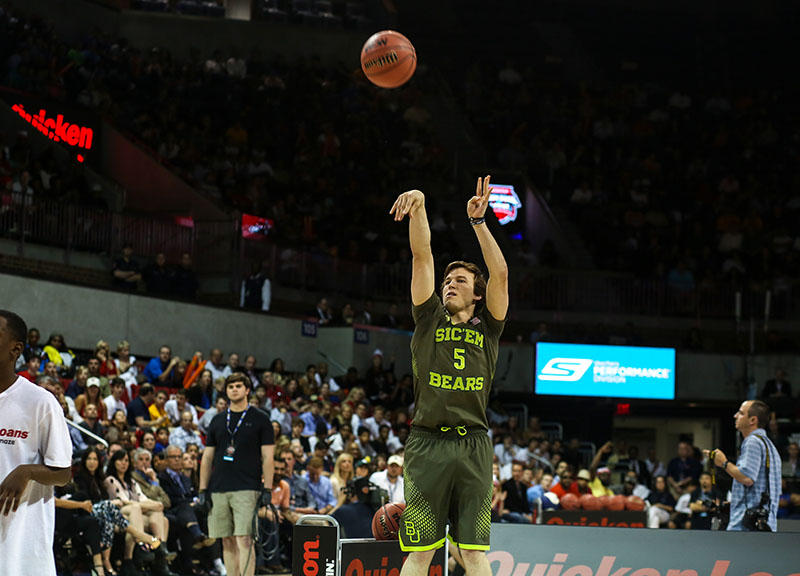 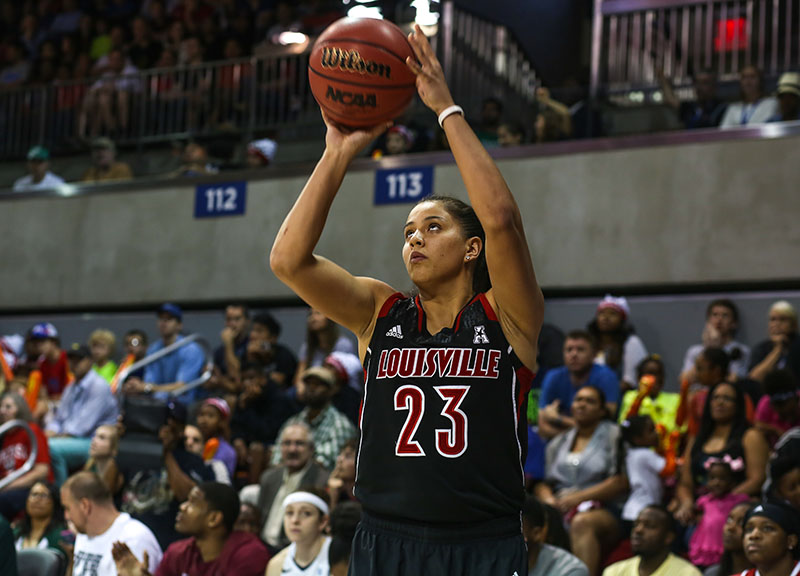 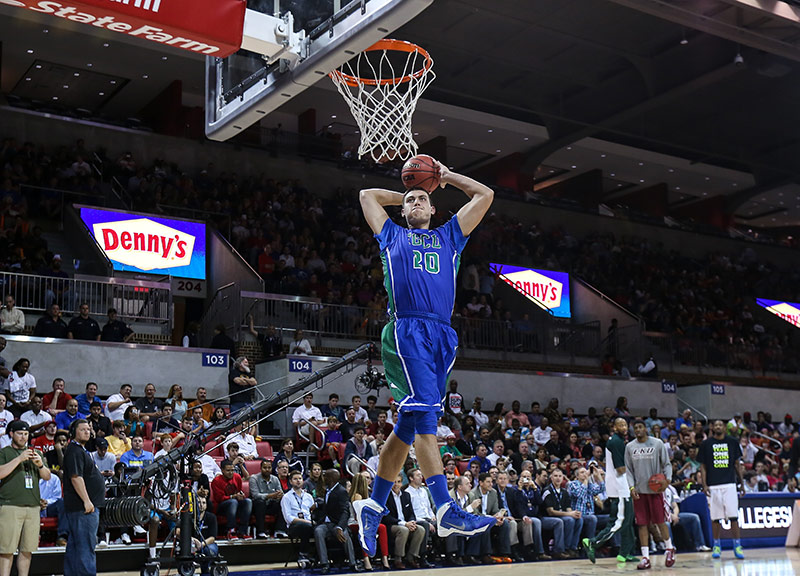 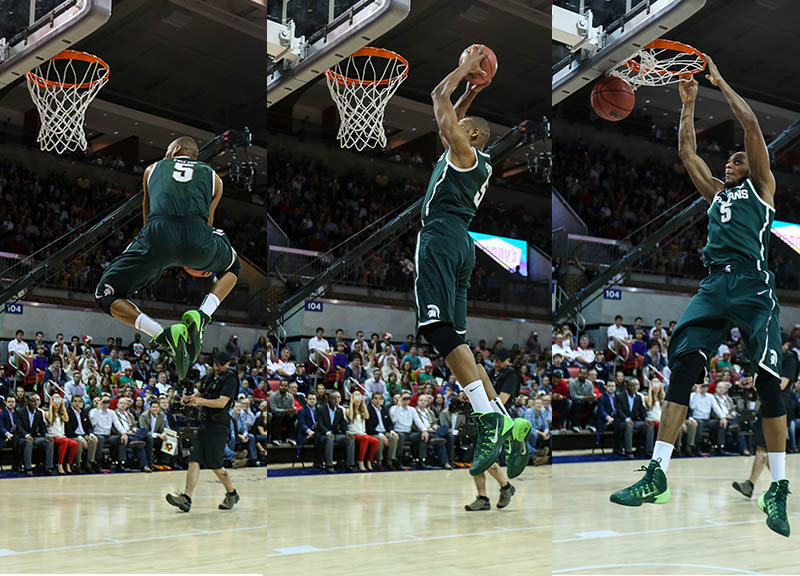 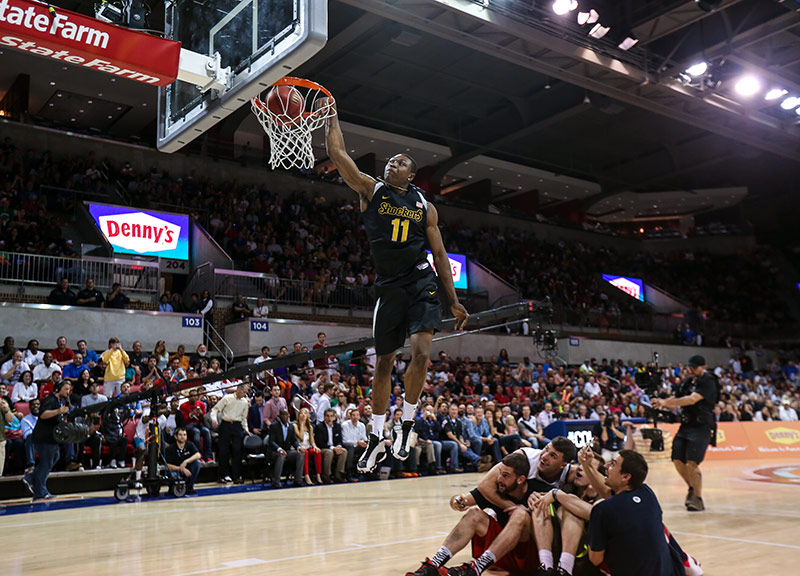 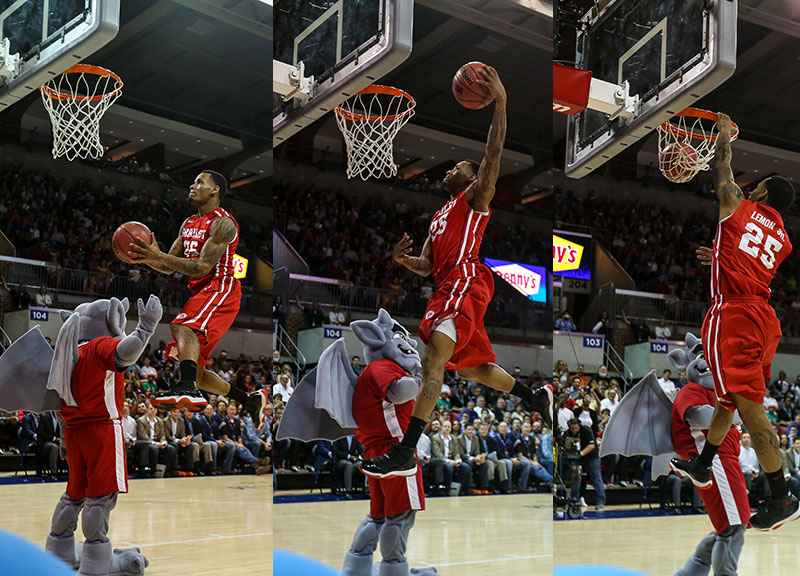 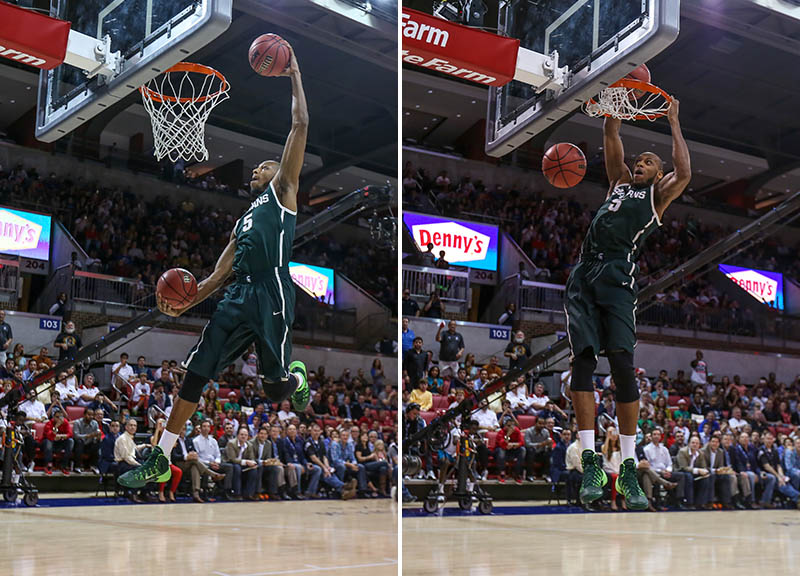 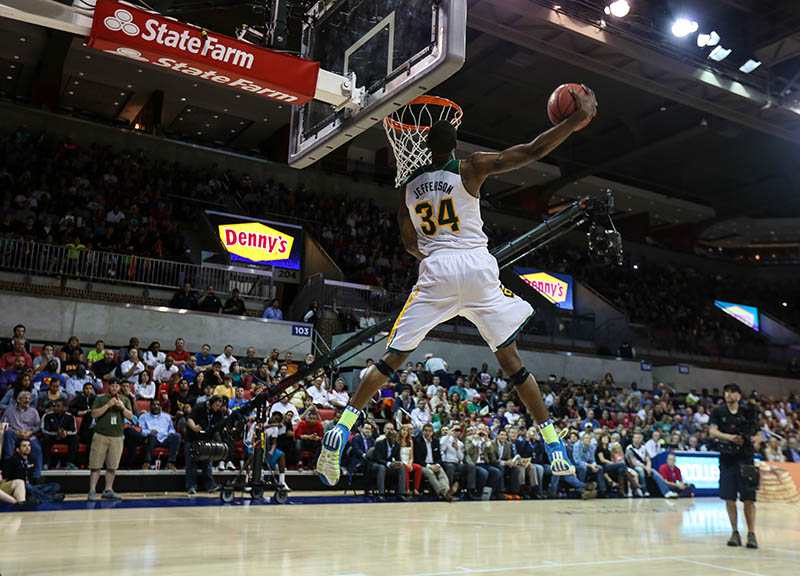 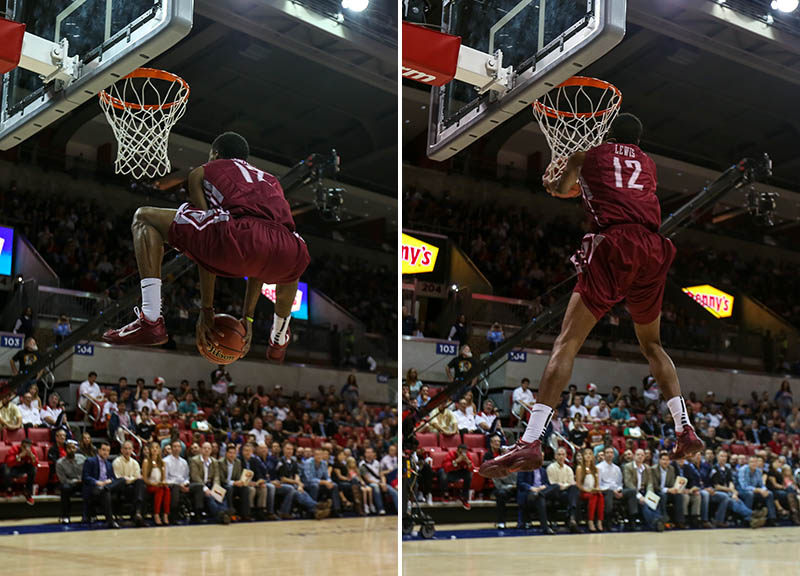 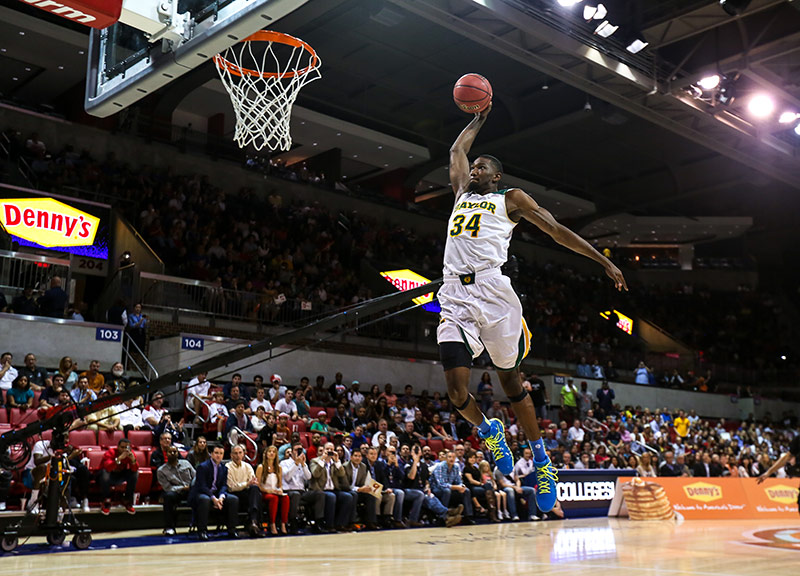 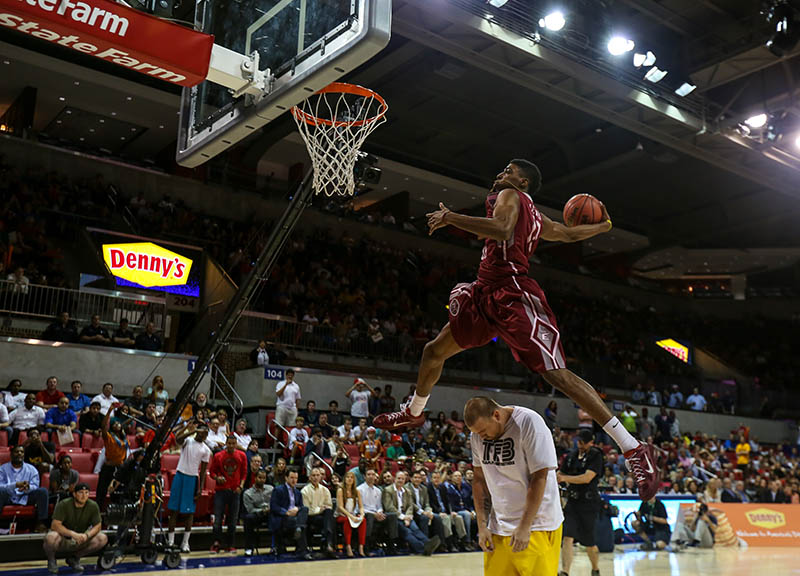 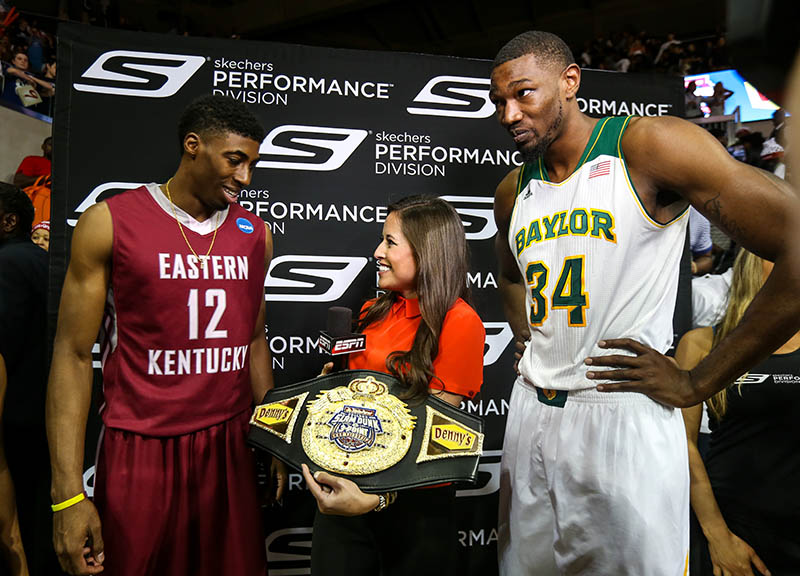 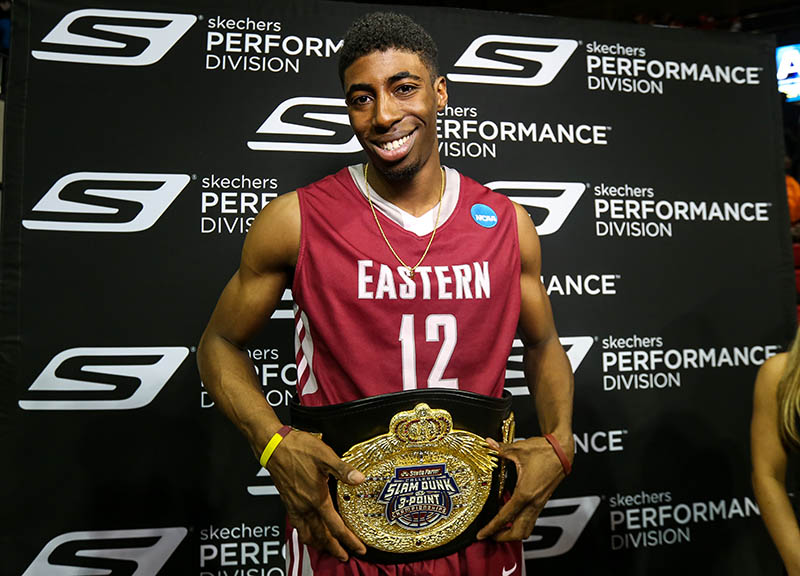