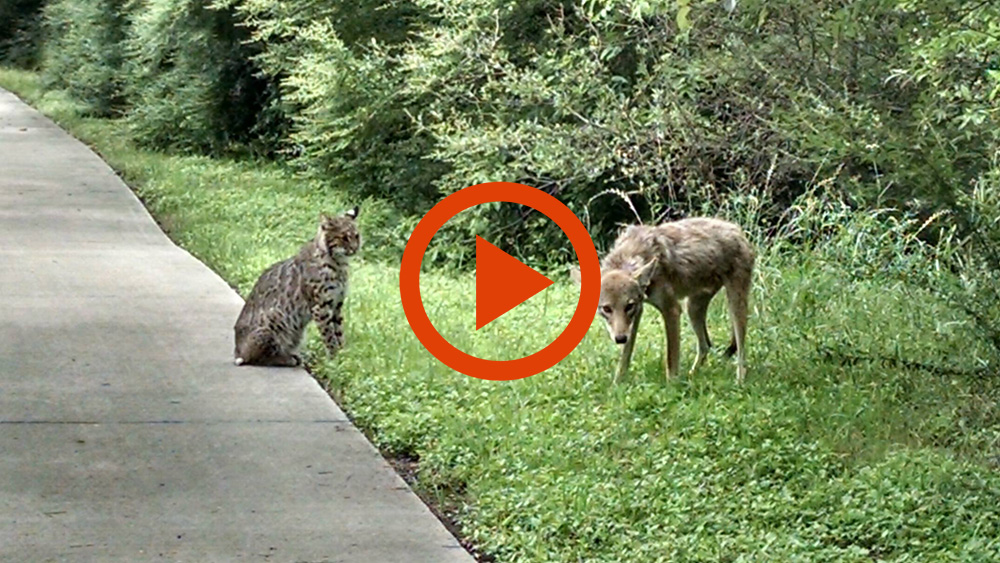 Watch As A Coyote And A Bobcat Cross Paths On An Arlington Bike Trail.

It's already been a fun week here in North Texas for viral videos of animal interactions out in the wild, and though this latest one's simultaneously more majestic and less violent than its predecessor, it's just as compelling — if only because it confirms that the City of Arlington's more than just a tourist trap of ballparks and amusement parks.

The clip — shot and uploaded to Facebook on Monday, and already boasting more than 240,000 views at the time of this writing — shows a couple of cyclists whose afternoon rides along the trails of Arlington's River Legacy Park got interrupted by a trail-side standoff between a bobcat and a coyote.

Bobcats are nothing new to the area at large nor to River Legacy Park in general, and coyotes are just something we're all going to have to learn how to live with around here at this point, but it's a startling interaction to see on video just the same.

Jon Snow — the man who shot the video and who swears that, yes, that's his real name — agrees. He says he'd never seen anything like it previously, which is why he decided to film it in the first place.

“I've seen bobcats and coyotes in the area before, but never in the park and never together,” Snow says. “I did see three more bobcats on my ride that day, but they didn't stick around for very long. I've run into some wild pigs before on the mountain bike trails. Armadillos and snakes, [too]. When I first rode up, I thought I was looking at two dogs. It wasn't until I got a little closer that I noticed one of them was obviously not a dog.”

Nope, definitely not a dog.

And, in turn, it was something Snow says he pretty quickly realized he needed to capture on video, as it's definitely at least a little bizarre to see these animals interacting like this in a park — not to mention acting so comfortably around humans.

“It was a little intimidating,” Snow concedes, “especially when the bobcat started chasing the coyote. [That's when] I got up off my bike and stood behind it. I was never really scared, but I was [aware] that it was potentially dangerous if I made any sudden moves or got too close. But the animals seemed pretty absorbed in each other. I didn't feel like they paid much attention to me, except to acknowledge that I was there.”

Bike ride interruptusPosted by Jon Snow on Monday, May 11, 2015 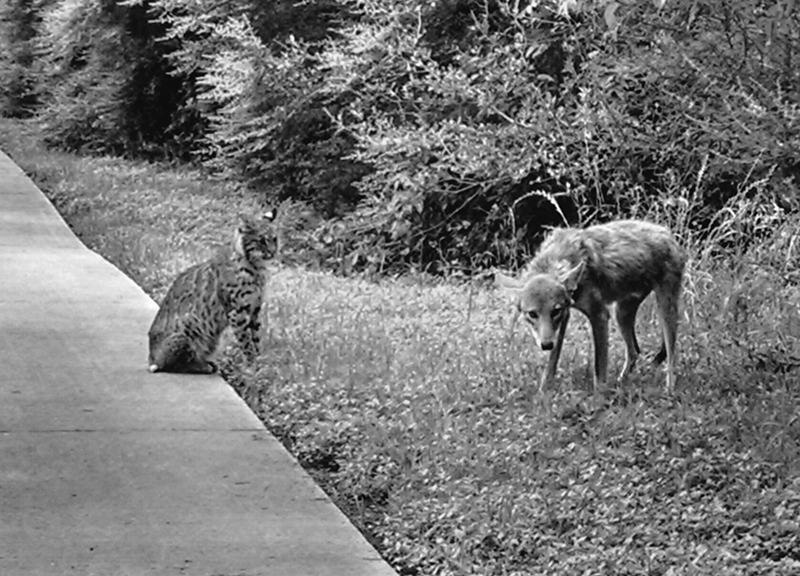