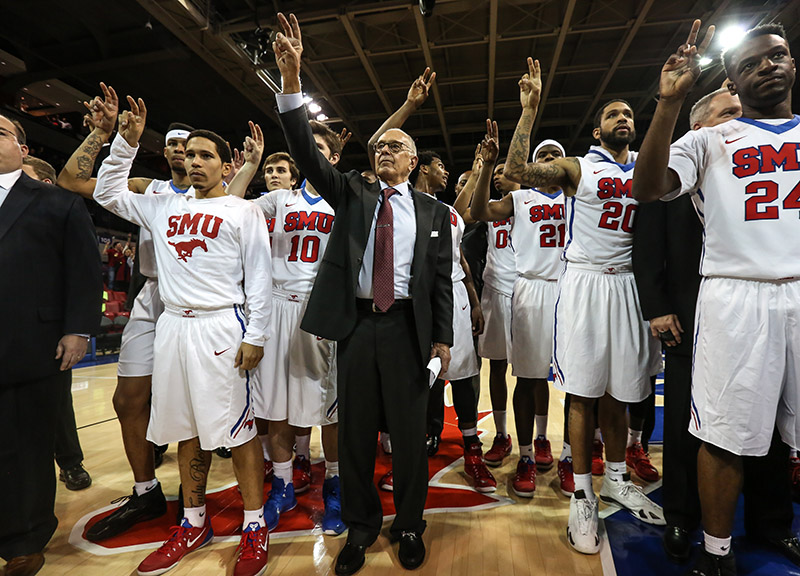 SMU Is The Most Penalized School In The History Of The NCAA. Here Are Its Worst Miscues.

Today, the university's men's basketball and golf teams were sanctioned by the NCAA for violating multiple rules, including academic fraud, unethical conduct and bad recruiting practices. As a result, the NCAA's infractions committee has ruled that SMU will face three years of probation, with the men's golf and basketball programs are banned from the 2016 postseason.

The men's basketball program will also lose nine scholarships over the next three years and the golf program must cut its scholarships by 25 percent for three years (the length of the probation). Both programs will also have to pay a fine of $5,000 plus one percent of the corresponding program's budget.

Head men's basketball coach Larry Brown will also be suspended for the first nine games of the upcoming basketball season. There are a few more sanctions, but, really, those are the major penalties the school is facing.

It's basically the Coma Penalty.

It's a big deal, too. Today, and for the next few days, you can expect to hear people from all over talking about the violations — and namely the basketball ones, sure. Mostly, that focus will be on the fact that a former administrative assistant helped Keith Frazier obtain academic credit in a fraudulent manner, and then lied about it. Surely, we'll also discuss how coach Brown didn't adequately handle the matter when it came to his attention, and how he also may or may not have lied about the academic fraud.

As of now, the team is “considering” an appeal of these sanctions.

What it should really consider is a cultural change, though. See, this ain't the first time that Brown or SMU have been penalized for cheating. In fact, this is the third time Larry Brown has been sanctioned by the NCAA. But Brown's just a petty criminal when compared to his employer. This most recent penalty represents the tenth time that SMU has been on the receiving end of NCAA sanctions for a major infraction. That's more than any other school! Go Mustangs!

In honor of this achievement, let's rank every single one of the school's 10 sanctions, from bad to worse.

10.
Date: Apr 21, 1958.
Infraction: Improper recruiting employment.
Sport: Football.
What happened? Basically, a recruit got a summer job he wasn't qualified for because he was an athlete. The NCAA even found that he didn't receive an “exorbitant rate of pay.” There are way worse acts of nepotism.
Penalty: One year of probation.

9.
Date: March 10, 2011.
Infraction: Violations involving impermissible text messages sent by members of the men's basketball staff to parents of prospective student-athletes.
Sport: Men's basketball.
What happened? Coaches at SMU sent a bunch of texts to the parents of at least seven recruits. This doesn't seem so bad, but it is a violation of the rules and it seems like the coaches tried to get away with a loophole.
Penalty: Two years of probation. Restrictions on recruiting.

8.
Date: January 21, 1976.
Infraction: Improper financial aid; improper recruiting entertainment, inducement and transportation; excessive number of official visits; unethical conduct; certification of compliance.
Sport: Football.
What happened? An assistant coach falsified documents that would implicate him on improperly purchasing a meal for a student and his girlfriend. There were also a few paid visits to campus along with automobile accommodation provided for prospects. The program improperly uses financial aid too.
Penalty: Probation extended a year, football scholarships reduced, financial aid reduced and the forced firing of an assistant coach

7.
Date: June 10, 1981.
Infraction: Extra benefit; improper recruiting contacts, entertainment, inducements, lodging and transportation; tryouts.
Sport: Football.
What happened? The head coach and a few assistant coaches told prospects that they'd be able to gouge the hell out of complimentary tickets. Illegal lodging arrangements were made for a recruit's family. A free meal was given to a recruit with round-trip automobile accommodation to another. Boosters were inviting recruits to their homes and giving them free meals like clockwork. Free tickets to away football games were given to prospects. Assistant coaches gave prospects cash gifts and provided cars to players to transport recruits during their visits.
Penalty: One-year ban on postseason, one-year ban on television, two years of probation.

6.
Date: Apr 12, 1965.
Infraction: Improper transportation; improper recruiting inducements and transportation.
Sport: Football.
What happened? Two students were flown from their homes to Dallas by a booster. The dude didn't even accompany the prospective recruits. This is no good.
Penalty: Two years of probation; two-year postseason ban.

5.
Date: Aug 26, 1974.
Infraction: Improper entertainment, financial aid and lodging; extra benefits; complimentary tickets; improper recruiting entertainment, inducements and lodging.
Sport: Football, men's basketball.
What happened? Several players were paid for making outstanding plays on the special teams unit and on the scout team. The head football coach helped players sell their complimentary tickets for cash, gave them theater passes for great plays in games and certain players would receive dinners paid for by the program. The head football coach also arranged for a player and his wife to receive free off-campus housing. An assistant football coach arranged for a prospect and two of his friends to attend a Cowboys game and lodging for free. Basketball players received cash for personal expenses from assistant coaches and boosters, and the head coach knew.
Penalty: School placed on probation for two years. Head football coach and an assistant coach put on probation for a year. A two-year postseason ban for football, plus a two-year television ban. A one-year postseason and television ban for basketball.

4.
Date: September 29, 2015.
Infraction: Improper transportation; improper recruiting inducements and transportation.
Sport: Men's basketball, men's golf.
What happened? This is the most recent infraction, the one talked about in the intro to this list. A former administrative assistant helped a player receive academic credit in a fraudulent manner by completing coursework and exams for the student. She also lied about it. Head coach Larry Brown didn't adequately handle the matter when it came to his attention and then allegedly lied about the academic fraud. Meanwhile, the former head men's golf coach allowed for recruits to purchase reduced-cost merchandise and golf equipment. He and an assistant coach also engaged in illegal recruiting techniques with text messages.
Penalty: One-year postseason bans for both men's basketball team and golf teams. Head men's basketball coach Larry Brown gets suspended for nine games.

3.
Date: Dec 13, 2000.
Infraction: Violations of NCAA bylaws governing recruiting, extra benefits, academic fraud and unethical conduct.
Sport: Football.
What happened? An assistant coach found out that a recruit was thinking about getting someone to take the ACT for them. He met with the recruit's high school assistant coach and they devised a plan in which the would be test-taker would get $100 for taking the test, plus another $100 and an A in the course that the assistant high school coach taught for getting a qualifying score. But he didn't qualify. So the prospect got another student to take the test at a later date for $100 and the assistant coach knew of this plan. On a lighter note, an assistant coach played a pick-up game of basketball with a recruit in Louisiana.
Penalty: Two years of probation; a two-year postseason ban. Financial aid awards reduced, number of expense-paid recruiting visits reduced. Wins from 1998 season vacated.

2.
Date: August 16, 1985
Infraction: Improper recruiting contacts, employment, entertainment, inducements, lodging, publicity and transportation; tryout; unethical conduct; coaching staff limitations.
Sport: Football.
What happened? Numerous instances of boosters providing special financial assistance to recruits. A booster gave recruit's family $5,000 in cash, and promised to find the father a job in Dallas, provide a rent-free apartment and give the recruit a $300-a-month allowance. An athletics representative gave the father of this recruit $2,000 for living expenses. Another booster provided three free tickets to the Cotton Bowl to a prospect and entertained him with free dinner. You get the deal — a lot of illegal boosters things happened here. Members of the athletics department also held a tryout, excessively reimbursed a prospect for his automobile trip and arranged for a recruit's brother's employment with a booster.
Penalty: Three years of probation, two-year postseason ban, one-year television ban, reduction in financial aid. Bans and stricter rules were placed, temporary and permanent, on boosters interfering with recruiting. Placed assistant coach on probation for a year, reduced his salary by 15 percent and prohibited him from recruiting for a year; disassociated three representatives from recruiting for three years and one representative for two years; forced to show cause why more penalties should not be imposed if institution does not take disciplinary action against a second assistant coach.

1.
Date: Feb 27, 1987.
Infraction: EXTRA BENEFITS: 21 football student-athletes received approximately $61,000 in cash payments with the assistance of athletics department staff members, from funds provided by an athletics representative. REPEAT VIOLATOR.
Sport: Football.
What happened? Here comes what is colloquially referred to as the “death penalty,” the thing that pretty much destroyed a growing legacy at SMU when it came to football. Mostly, the cause was a total of $61,000 in cash money given to football players by boosters. There's a pretty great documentary on this called Pony Excess.
Penalty: Banned from playing football for the year of 1987; four years of probation; only permitted to play seven games in 1988, none of which should be home games: two-year television ban. During the year of 1987, the only practice allowed is that of conditioning — no instruction whatsoever. Only allowed a head coach and five assistants until the 1989 season. Harsh penalties on financial aid received. No member of university coaching staff allowed to recruit off campus until 1988 season. A number of smaller penalties on recruitment, too.