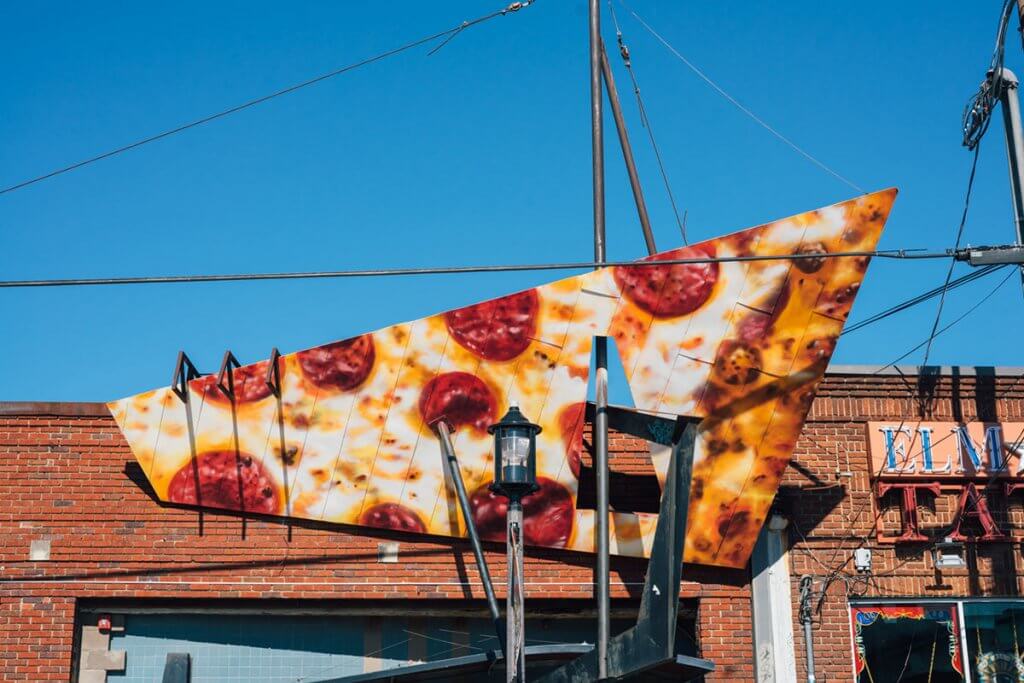 Which of Deep Ellum and Expo Park’s Nine Pizza Parlors Is Best?

When Stonedeck Pizza Pub officially opened for business back in July, it did so within an already-crowded Deep Ellum pizza market.

By our count, it was the ninth pizza-slinging operation to open shop in or in the direct vicinity around the just-east-of-Downtown neighborhood. So, yeah, the truth of the matter is that, these days you are in absolutely no danger whatsoever of going underserved should a pizza craving hit while you’re in this part of Dallas.

But, alas, not all pizza parlors are created equal. To that end, we present these, the definitive rankings of Deep Ellum and Expo Park pizza parlors in 2014.

9. Zini’s Pizzeria.
2639 Elm Street.
This venerable Dallas pizza chain is, at best, underwhelming. But its Deep Ellum location is, without hyperbole, the absolute fucking worst. Despite its high-traffic location and the fact that it’s been around forever, the staff always seems genuinely surprised and unprepared when any customers walk through the door. Sure, Zini’s will do in a pinch — or, more likely, when the lines at the other pizza spots nearby are too long. But it’s rarely worth the effort. Unless, wait, do you prefer your crust to taste like cardboard?

8. 7-Eleven.
2608 Elm Street.
Sure, the pizza crusts here taste like cardboard, too. And, far as you know, they just might actually be pieces of cardboard. Also? The cheeses on these pizza slices are generally grossly congealed from many hours spent under the heat lamps by the time you get to them — and that’s only really a good thing if you’ve been weirdly nostalgic for elementary school pizza day prior to stopping in for a pack of smokes. But, hey, the husband-and-wife duo that runs this shop during the day is just the sweetest, and customer service really does count for something. Yeah, we’re still throwing shade at Zini’s when we say that.

7. Elbow Room.
3010 Gaston Avenue.
The Elbow Room is easily forgotten, but those who love it swear by it. And it’s easy to see why: Located just on the outskirts of the neighborhood’s north side, Elbow Room is an oasis of sorts — a dive bar that exists completely on its own terms and really doesn’t take its surroundings into account, not even one bit. It’s Anywhere, Dallas, and it just so happens to be close to the action. What I’m getting at here is this: Elbow Room is great for a number of reasons, its pizza not necessarily being one of them. It’s not bad — it’s a sloppy, greasy pie, and sometimes that’s what you’re craving — but, more than anything, the pizza here is mostly a perk of the bar’s other offerings, and the fact that the kitchen’s open till 1 a.m. is just another one on top of it.

6. Pizza Lounge.
841 Exposition Avenue.
Pizza Lounge’s pies are decently sized, its crusts are airy and crispy, and its cheeses and toppings come in solid, enjoyable ratios. Considering the spot’s sketchy past dealings with the homeless, though, it’s still pretty tough to eat here with a clean conscience. On the other hand, the fact that, some four years later, the shop has clearly endured that PR nightmare is probably a testament to the separate fact that its pizza is very, very decent.

5. Anvil Pub.
2638 Elm Street.
Anvil is by no means a traditional pizza parlor. But, fact is, there’s pizza on the food menu, and it’s a surprisingly solid option, actually. Plus, it’s fun: If you and a friend order a pizza to split, you can order it with a “bullet,” which means that some crazy spicy peppers will be dropped in under the cheese of one of the slices in your pie. It turns your dinner into a round of Russian Roulette, essentially. Or, if you prefer, you can just go all-out with your spicy desires and order the Texas Sage pie, which replaces its tomato sauce with raspberry jam and comes topped with grilled jalapenos. Weird on paper, good on your tongue.

4. Serious Pizza.
2807 Elm Street.
Is bigger really better? Sure, if you don’t mind waiting half an hour for your-custom-ordered, bigger-than-your-face slice to come out of the oven. Or if you don’t mind a sauce that’s too sweet or mozzarella sprinkles that are too light. Still, there’s no doubting that a Serious Pizza trip is an experience, if a generally overrated one. So I guess there’s that.

3. Stonedeck Pizza Pub.
2613 Elm Street.
Let’s be blunt: The pizza at Stonedeck is pretty weird. But it’s an interesting kind of weird. And, really, we should’ve expected that: Before opening their doors, Stonedeck’s owners told us that their aim was to serve a pizza with a crust that was crispy throughout — the same model, they perhaps badly explained, that Pizza Hut initially set out to follow but ultimately failed to follow through on. Credit where it’s due, though: The pies offered here very much do boast crispy-throughout crusts, but less in a Pizza Hut way than in a traditional thin-crust kind of way. Also, the toppings are treated with some serious care, and the “single” pie servings aren’t bad deal at $12 a pop and too big to eat in one sitting. Plus, as atmosphere goes, the patio out back is a hidden, quite-boss gem.

2. Mama Mia Pizza & Pasta.
2935 Elm Street.
I’m pretty sure I’m one of only maybe 30 people that even knows that Mama Mia exists, as no one — no one — ever knows what I’m talking about when I rave about it in public. Really, I have no idea how this place remains in business; its hours are weird, and, aside from the random cop you might spot munching on a slice inside, there’s almost never anyone inside the space. Is that an indication that this place is a known front for something shadier? I have no idea. My point is that, somehow, Mama Mia remains. And thank goodness for that: This is a no-frills New York-style pie — so much so that it’d almost be boring if there weren’t a dearth of places like this around town — and it’s consistently made with the proper cheese-to-sauce-and-topping ratio and crusts that beg to be dipped in marinara. You want a traditional pie in Deep Ellum? There really is no better option than this one.

1. Il Cane Rosso.
2612 Commerce Street.
You either dig the way Jay Jerrier reps his pizza joints on social media or you don’t. But, regardless, you’ve gotta respect the pizzas he slings — even if it’s of the more fork-and-knife than fold-ready variety — if only for the fact that he’s been able to turn his brand of authentic Neapolitan pizzas into an empire. These days, there are four Cane Rosso joints spread out across North Texas — and that’s not even taking into account his killer New York-style Zoli’s spot out in Oak Cliff. This location, of course, is the O.G. of it all — well, not counting the travelling oven he used to drag around town beforehand — and, since opening in 2011, it’s been at the forefront of revitalizing the Deep Ellum dining scene. Make no mistake: Without Jerrier diving in first, this neighborhood would’ve never even been considered as a viable new home for Pecan Lodge or the soon-to-come Lushcer’s. Dude turned the neighborhood into a dining destination almost singlehandedly — and with good reason, too, as the pizza here just sings. Perhaps even more impressive than the always-fresh ingredients, the inventive special pie combos on the menu and the way this spot even takes its model into the dessert realm is just how goddamn quickly the crew here spits pies out of their oven. But, thing is, even if it did take a while for these pizzas to come to your table, they’d still be worth the wait. These suckers very much live up to the hype. They’re fucking delicious.