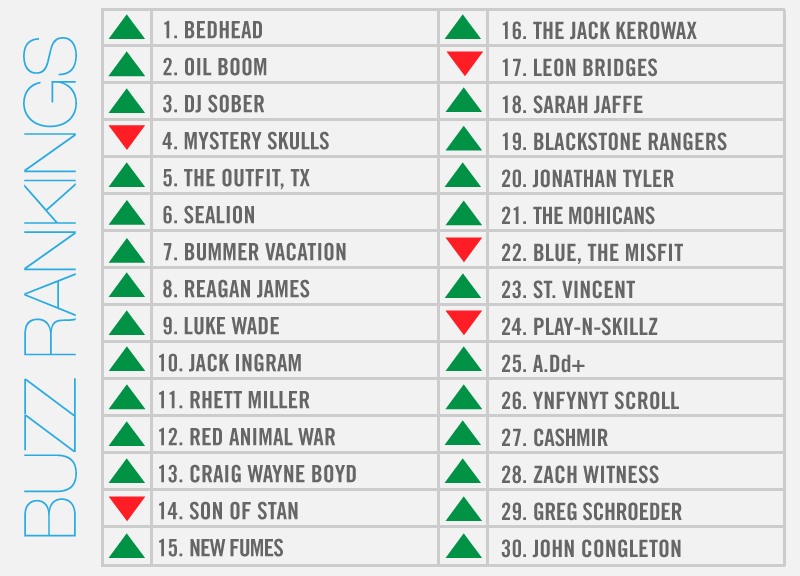 This Week, Bedhead Rose Up.

A week after Numero Group reissued the entire catalog of the great Bedhead as part of a four-album box set, praise for the long-defunct Dallas band has grown more and more effusive.

This week alone, the collection has been called “the most essential Dallas reissue of 2014” and the band was labeled both “the greatest Dallas band” and “the best band from the '90s you've never heard.”

Now, the band adds one more accolade to that growing list, as its also topped our weekly local music power rankings. It makes the first-ever No. 1 for the band, largely because Central Track wasn't around in the '90s.

And, as was the case with Bedhead, new releases have earned national praise for other artists on this week's list, as well. Take Oil Boom, for instance, which will release its Red Metal LP this weekend. Its “Sneak Tip” single was hailed one of the ten songs public radio can't stop listening to via NPR.

Likewise, Mystery Skulls' recently-released, Nile Rogers-featuring debut LP earned the band plenty of praise in other area publications this week, though none of them bothered to correctly spell the last name of the project's Luis Dubuc. (Note: The second vowel is a “u,” not an “a.”)

Meanwhile, The Jack Kerowax, Problem Dogg and The Mohicans also received a boost from their own new releases.

Then there's Rhett Miller, The O's and Prophets & Outlaws, which will each perform at the annual CF Benefit this weekend at Granada Theater. Also riding the benefit show wave are Sealion and Bummer Vacation, which will appear at the inaugural In the Garage Alliance show, which will help raise money for musicians in need. On the same tip, Leon Bridges, Son of Stan and Madison King were among the performers announced this week for a January show that'll help Dallasite John Bullard with medical expenses stemming from his struggles with Cerebral Palsy.

Elsewhere: Reagan James, Luke Wade and Craig Wayne Boyd all three made their way to the Top 10 of The Voice; Jonathan Tyler's been tapped to play next year's SXSW; Jack Ingram will play a free show at the AT&T PAC next month; and Red Animal War announced a reunion show, also set to go down next month.