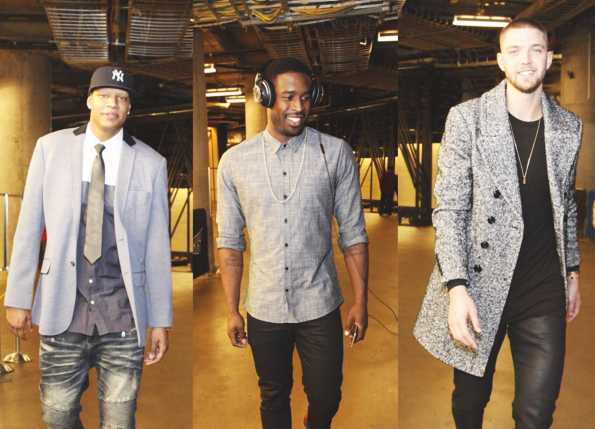 The Definitive Ranking Of The Dallas Mavericks Players' Sartorial Abilities.

The Dallas Mavericks Instagram pretty frequently highlights its players' style choices these days. Of course they do. Style is an important thing when it comes to NBA players in 2016. Pregame outfits in the NBA are basically red carpet-like showcases.

No, not everyone digs it. Commented one user on a fashion-forward Mavs post on IG: “Who cares about their clothing, what's important is if they can produce on the court. If they can't then they should've even be getting paid what they do to buy those ugly ass clothes.”

I suppose the guy has a point. But he's also missing one. Sometimes, life's about having fun and looking damn good.

And so, in honor of fun — and also the fact that Mavericks guard J.J. Barea just released his own clothing line (what), we figured it about time we did a ranking of Mavericks' most fashionable players.

Have you signed up for a chance to win this #dirkart by artist @platanosfritos yet? I'll sign it if you want. Go to www.swish41.com and scroll to the bottom. #nba #dallasmavs #mavsnation

7. Dirk Nowitzki | PF | #41
Dirk is a very boring dresser. He has no style whatsoever. He is, however, a guaranteed Hall of Famer, a league MVP, a finals MVP, a 13-time All-Star, an NBA champion and The Single Greatest Maverick Of All Time. And those accolades probably keep him warmer than a nice cashmere sweater ever could.

6. Deron Williams | PG | #8
Even though Deron Williams once wore Air Yeezys, his style is more or less very fatherly. He's like that well-dressed dad that could probably pull out a few cool threads from the back of his closet to hand down once you get some bass in your voice.

5. J.J. Barea | PG | #5
J.J. Barea looks alright in a suit, as one should. Outside of a suit, though? That's a different story. Barea's look is very broish. At least Barea is a ballin' ass bro, though. Or is he? Does he even vape?

4. Charlie Villanueva | PF | #3
Charlie Villanueva is trendy dresser, but not a particularly awesome. The thing about men's style is this: If you're going to get your feet wet with the aesthetics of the day, you have to pull them off perfectly or you'll look like you're trying too hard or just walking into a store and grabbing random things. Since Villanueva is rich and still fairly young, his look is probably a combination of both of these things. But it's never a good look when your outfit is louder than American Airlines Arena during a comeback.

3. Wes Matthews | SG | #23
Wes Matthews' sartorial style is comparable to his on the court style: He's a volume shooter. Matthews will take a lot of chances with his outfits, which means he sometimes comes off looking a little cartoonish. But when he takes chances and succeeds, he looks like he smells like a very expensive bottle of Tom Ford parfum.

2. Zaza Pachulia | C | #27
Zaza Pachulia, from Georgia the country not the state, is actually a pretty snazzy dresser. He has the swagger of an international playboy or a Bond villain. Unlike the majority of his teammates on this list, Pachulia will almost always be decked out in a sweater or a blazer if the weather permits. That's a good look.

1. Chandler Parsons | SF | #25
Chandler Parsons is no A$AP Rocky or ever Ryan Gosling when it comes to getting dressed. He's more Details than GQ, let's face it. But that's still enough to unequivocally make him the best-dressed Dallas Maverick. He's contemporary yet casual, and he doesn't wear anything too wild and outrageous. He just looks good.

BATTLE! Which outfit is your fave? #DALvsBOS

First bus heads to the arena for #DALatSAS!