Race To The Bottom. 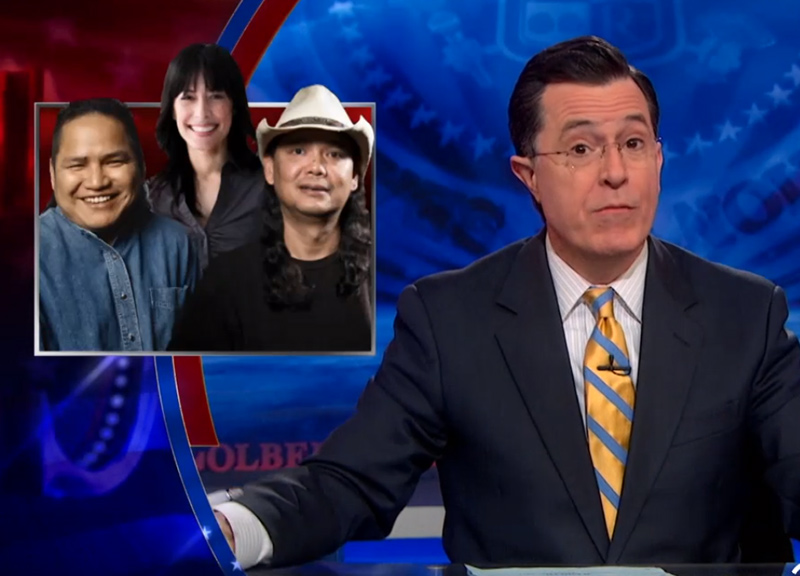 A funny thing happened during a recent Colbert Show bit that attempted to find a little humor in race: The Comedy Central show actually ended up doing something racist. And not racist in that whole “I'm saying something so overly racist that it's clearly satire” way for which the show's host, comedian Stephen Colbert, has become so revered. Just straight up, regular ol' American racism, through and through.

On Thursday, February 27, Colbert ran viewers through a segment in which he lambasted a National Public Radio piece about the changing perceptions of race over time. The study — a look into the ways in which governments, schools and businesses keep track of race — found that stereotypes drove perceptions of race as much as anything else.

Then, in a twist of irony, Colbert ended up falling for the same thing he was complaining about. The host misidentified a Dallas bartender as Native American, presumably because of the color of his skin, the length of his hair and the fact that he was wearing a cowboy hat.

Perhaps the study had some merit after all. In the NPR piece, Stanford University sociologist Aliya Saperstein discussed the National Longitudinal Survey of Youth: “If someone went from being employed to being unemployed, or being out of prison to being in prison, or being off welfare to being on welfare, the interviewer was more likely to see the person as black — after they experienced that sort of downward mobility — than before.”

Natural fodder for Colbert and his writing team, no doubt. Except, four minutes into his rant, Colbert, while discussing how people of various races can better their perceptions, mentioned the plight of indigenous Americans.

“Native Americans,” Colbert said, “if you turn those casinos into tech support call centers, suddenly, you're an actual Indian.

The joke ran with a picture of what one might assume were three Native Americans over the host's shoulder. Only, see, here's the thing: At least one of these people isn't Native American at all.

The man on the far right of the picture is undeniably Don Morrison, a bartender at the Deep Ellum bar Double Wide. Morrison is of Thai descent.

To his credit, Morrison, who found out about the segment after the fact when a few of his friends notified him of his photo's inclusion, says he doesn't seem to mind the photo being used. As for his race being misidentified? Morrison is laughing that off, too. He can't even recall where the photo is from.

But is assuming that a brown-skinned man with long hair is Native American simply because of the fact that he's wearing a cowboy hat any better than assuming that someone is black because they're on welfare?

And that's the word.