[Q&A] We Interviewed The Oak Cliff Camel Guy About His Camel. 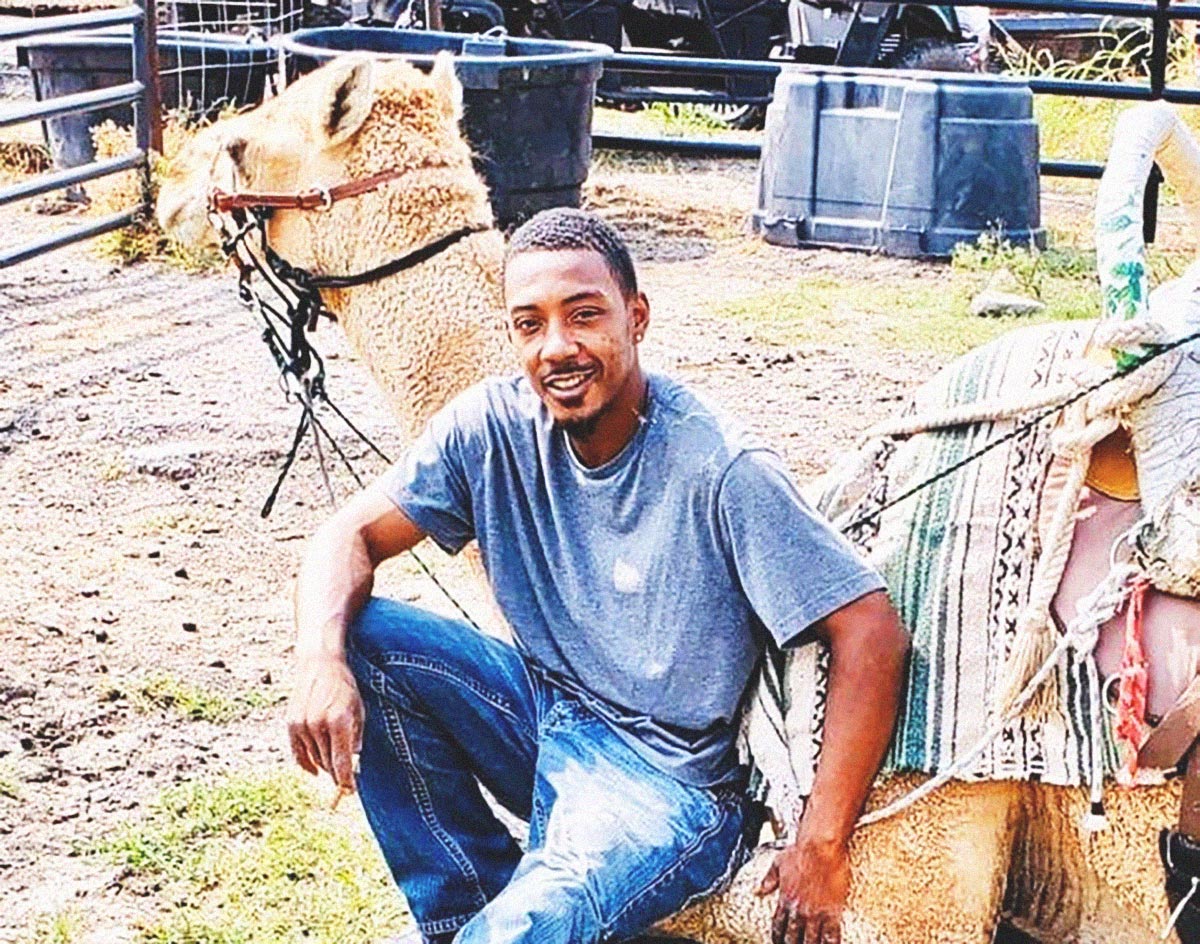 We Tracked Down The Guy Who Keeps Going Viral On Social Media For Walking A Camel Around Oak Cliff (And Other Neighborhoods Across Dallas And North Texas).

You may have caught the sighting of a camel walking around in Oak Cliff that was trending on Twitter last week. It’s happened a few different times now across various social media networks, actually.

Technically, it’s a dromedary, which is essentially a cousin of a camel.

Nothing to see here. Just a pet camel at a car wash in Dallas. Oak Cliff, Texas pic.twitter.com/jWAcZyng62

Michael Roberts, 34, is the proud owner of Tazah, the seven-year-old dromedary that keeps popping up on social media after being spotted at gas stations, car washes and just walking along the streets of Dallas.

SEE ALSO: [WATCH] WHY IS A LEMUR ROAMING AROUND IN DENTON?!?!

Roberts, who is originally from Tulsa, Oklahoma, has had a love for animals since his childhood, which is the short version of how he came to own Tazah — an exotic animal he has shown off all over Texas at this point.

If you’re really looking to take your Wednesdays to the next level, check out our interview with Roberts, in which we discuss what exactly he’s doing when he’s walking Tazah around town, the full story of how he ended up with Tazah in the first place and how Central Track readers can meet the famous dromedary himself if they want.

How did you get started in this whole camel world?
I grew up liking animals — like, if I’m cutting the yard and I see a turtle, I take it in. I take it in the house and keep it as a pet. Now, we have a German shepherd that rides in the trailer with my camel. I’ve always liked animals. My mom’s ex-husband turned me on to the horses when I was five years old. And when they separated, I kinda just got my own horse and took off from there. Then I met the exotic animal trainer Terri Bowen Lindley in Oklahoma. I was already into animals. She was an animal trainer, and I train horses on the side, so I just started going with her and [using] her techniques and stuff. It took me four years of going with her and being around camels before I even thought about getting Tazah. Once I got comfortable and learned how to deal with them, that’s when I got Tazah.

How’d you actually get him?
I actually bought him! He made it to Arkansas, and I bought him from a friend of mine.

Any idea where your friend got him?
No, no. I don’t know where she got him. But I know a lot of people with camels! There’s nothing out of the norm about them for me. Where Tazah stays, he stays with like 15 or 20 more camels.

Is that in Dallas where he stays?
I keep him on the outskirts. It’s the McKinney area.

Does Tazah have, like, a special occupation or a job?
No. He’s just a pet to me — but we do side jobs here and there! I just bring him out to show him off and let people see him.

What kind of side jobs does he do?
Birthday parties, events, family reunions. I take him to people’s family reunions and let them see him. I just take donations or whatever. 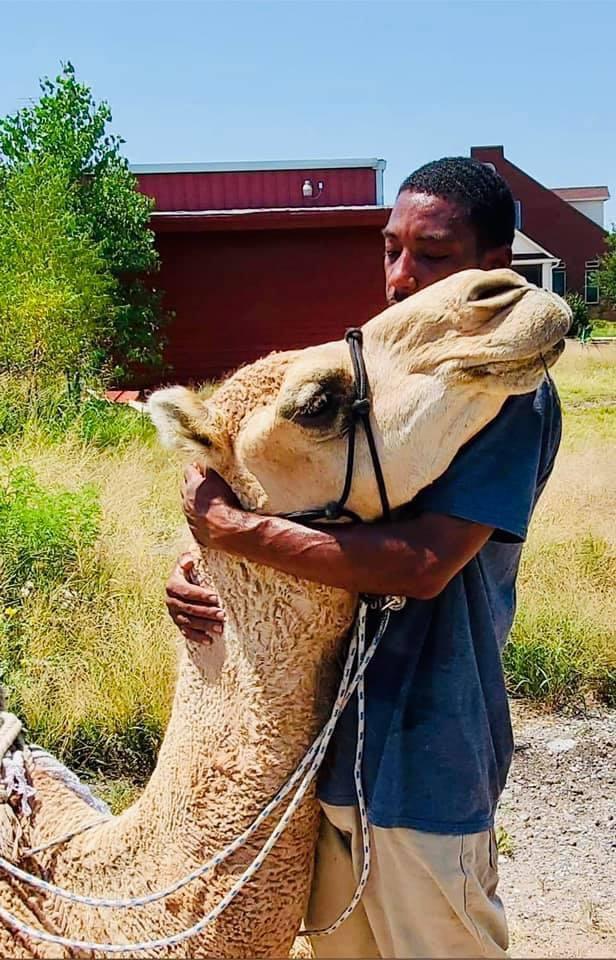 Roberts and his camel Tazah.

Are you aware that you went viral on Twitter pretty recently?
A lot of people told me that! I didn’t know it went viral because I don’t have Twitter. But it all eventually makes it to Facebook. So they kind of tag me or send it in my inbox, and they tell me they’ve seen him here and seen him there. There’s a few times it did that. He kind of went viral in a few different videos.

Do you remember the first time you went viral?
Yeah, I do! It was about two years ago when I actually first got him. He was actually sick when I first got him. I brought him back to life and we’ve been moving from there.

What was he sick with?
It was a parasite called barber pole, which eats their blood.

How were you able to get him back to health?
I took him to the vet a lot! Just taking him to the vet and doing things at home, you know? Just watching what he eats and, and making sure he eats the right things.

Which vet was that?
The Alvarado Vet Clinic.

Does that vet see camels often? Or was this their first one?
They’d already had camels. She recommended me to take him to the service lab. I mean, believe it or not, there’s a lot more camels in the United States than people believe. It’s like a little circle of us. Everybody who has camels, we kinda know each other. It’s a little weird — but, yeah, in the circle, I do know I’m the only African American. We all get together in October. And we have a camel conference and everything.

There’s a camel conference every October?
Every October we have a camel conference! We all get together, and we ride our camels. They come from all over the United States and bring camels to wherever it is. Last year, it was in Marshall, Texas, where we went to a little desert area. There’s pictures on my Facebook page. This year, we’re going down to Marshall again, and we’re going to meet up. We stay three days, we camp out and do tricks on the camel, camp out and then, on the third day, we leave.

What’s the craziest reaction you’ve seen to somebody seeing Tazah?
It’s crazy every time I bring him out. I mean, every time I’m out, all you see is phones. People ride next to the trailer while I’m driving down the highway with their phones out. And then I pull through the parking lot, and people think it’s a horse or something — and then they look again, like “No, that’s a camel!” They trip out, like, they just keep repeating themselves. They just sit there and just look at him. They’re shocked.

Do you only bring Tazah out when there’s, like, an event or something?
No. I just like bringing him out. Then we go riding around the city. I don’t like just keeping him in. I treat him like I treat my horses.

So you have horses too?
Yes, that’s actually why I started it. I was with this lady named Terri Lindley that I used to go with to train. She’s an exotic animal trainer, she’s from Oklahoma also and she’s the one that actually put me in this [camel] world. I just bring him out like I bring out my horses. If I’m at a park or anything — or anywhere I can take him out — then, you know, I take him out. I let people touch on him and stuff, just give them the experience. I like giving people the experience.

How many horses do you have?
I’m down to two horses. At one point I had 10 horses, now I’m down to two. But I’m working on more camels!

What different types of animals have you had throughout your life?
I’ve had multiple types of lizards. I had a bearded dragon, an iguana. I’ve had horses. Of course, different breeds of dogs. And now a camel. That’s the most exotic animal I’ve ever had. I’ve been around kangaroos, I’ve been around cattle — like miniature cattle — and lemurs, monkeys. One time, I got to experience being around helping out up close and personal with elephants in a circus I did with the camels.

What circus was that?
It was the Mesquite Circus and also the Fort Worth circus.

What’s your job when you worked at the circuses?
Camel rides. I’ve had the experience of meeting some nice people that own different species of animals, [such as] the elephants. This one guy brings his elephants up, gives elephant rides and does elephant shows with the elephants.

What’s the hardest part of keeping a camel?
Their health. You have to to watch their health. Their health is the biggest thing. Not only the health, but you have to know their reactions because they can really hurt you. Camels can really hurt you. If they’re not trained well, or you don’t have their respect, they really could do damage to you. But a lot of people see Tazah and how calm he is. It took me a while to get him like that with the help of Terri. A lot of people want camels because they’ve seen one, but if you don’t know how to take care of them, then they won’t last. Either, they’re gonna hurt you or they’re not gonna last long, ’cause camels get parasites really easily.

How would you describe Tazah?
He’s a loving camel. He loves people. He’ll greet you, give you kisses and everything. I haven’t had a bad experience with Tazah since I’ve been bringing him out. I did my homework first, and then brought him out. I didn’t just go buy a camel and bring it out into the open world. I actually did my homework with him — with the help of Terri, once again. He’s actually had no issues. He’s a loving camel. I’ve had him two years now, but I’ve been dealing with camels for almost seven years now. I’d say it took me four years before I even thought about it.

What’s something that people don’t know about camels that they should know?
First off, one thing I get a lot is that everybody thinks — and I was even taught this — that dromedary camels, which is the one-hump camel, do not spit. There is no water in his hump. It’s actually fat in the hump.

If somebody wanted to have Tazah at their birthday party how would they contact you?
Facebook. A lot of people find me on Facebook and Messenger.

What are your and Tazah’s next plans?
I actually haven’t made any plans with him! But, I mean, we can do whatever! We’ve just kind of taken it one day at a time. I’ve never expected to be talking to you, a reporter. It’s just happened. I’m just doing what I like, what I love. And everybody else loves him too. 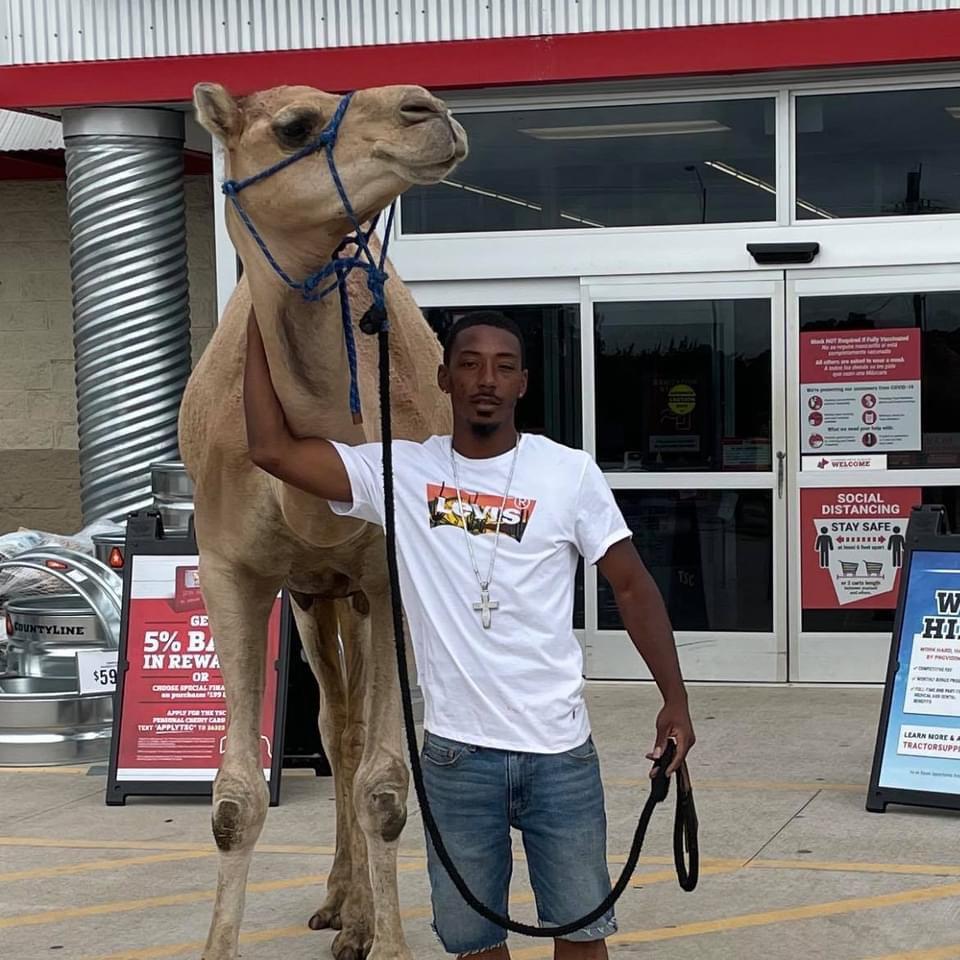 All photos courtesy of Michael Roberts. This interview has been edited for clarity.