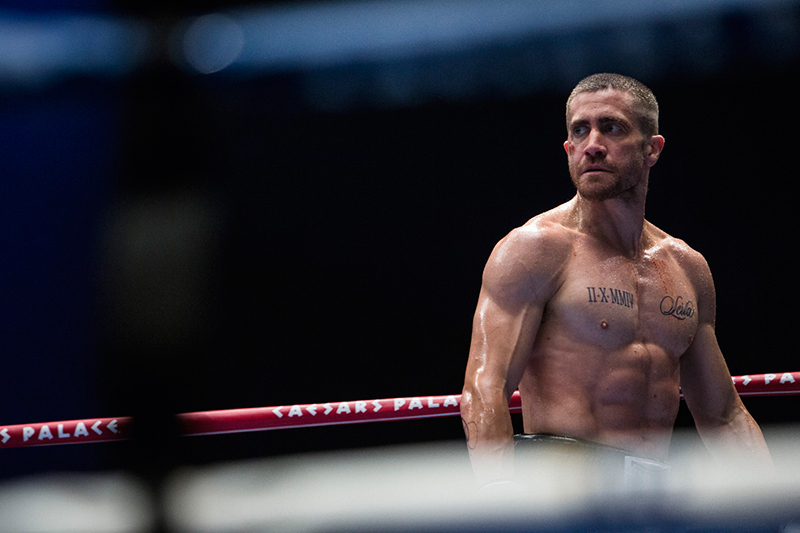 Jake Gyllenhaal's A Fine Actor, But Southpaw Isn't Worth Fighting For.

Jake Gyllenhall has long been one of America’s most versatile actors. He's played an overly involved detective in Prisoners, a psychotic cameraman in Nightcrawler and a terrified student in Donnie Darko.

One thing almost all his characters have shared, though, is obsession. In this regard, Southpaw is no different. Here, Gyllenhall plays a boxer named Billy Hope who's hell-bent on reclaiming what he's lost.

Unfortunately, Southpaw, for all its raw energy, can't punch its way out of the ring of boxing movie cliches. It's not altogether surprising — Antoine Fuqua (Training Day, Olympus Has Fallen) has yet to make a film that breaks out of its cliches — but it's still a little much. There are training montages galore, plus frequent messages about “fighting for what's really important.” The movie's slogan is even “Believe in Hope.”

At Southpaw's start, Billy’s on top of the world, holding onto his heavyweight belt after a truly ugly match. His wife Maureen (Rachel McAdams) wants him to hang up his gloves, but his shady manager (a never-better Curtis Jackson) encourages him to keep offering up his body for a few more years. Then, during an altercation with a fellow boxer and his entourage, a stray bullet flies and kills Maureen. From here, Billy spirals out of control: Eventually, he earning himself a DUI charge and, in the aftermath, a judge orders his daughter Leila away from him and into state custody. (This is supposed to be tragic stuff. But the movie's clearly shown to this point that Billy is an unfit father.) Determined to win Leila back, Billy starts training with Tick Wills (Forest Whitaker) at a run-down gym in New York. Then, we're off to the races.

Will this world-weary trainer offer Hope sage advice and better boxing techniques? You better believe it! Who will his opponent be at the big match in Vegas at the film's climax? If you guessed the boxer who sent Hope's life into disarray, well, you just won the title belt.

As with any movie that treads well-worn paths, cliches can be ignored if there's style and good acting and strong writing surrounding it. But while Southpaw certainly has some brutal boxing scenes, the rest of the film isn't so effective. While Gyllenhaal can play most any character, he can't overcome the lousiness of this script. Credit where it's due: Gyllenhaal clearly punished his body to get in fighting shape for this film, but he's found his acting limit with this character. It's just a little hard to buy him as an orphan from Hell’s Kitchen who drops the F-bomb every other word and explodes at the slightest provocation.

In Mystic River, Sean Penn had a major scene where his character had to be restrained once he realized his daughter had been killed. In the years since, that scene has been pointed to as an example of the worst kind of overacting. Gyllenhaal has a couple scenes like that here — veins bulging, sweat dripping, that sort of thing. His efforts aren't much improved.

Sure, there are some compelling moments in Southpaw. Some of the boxing scenes are quite thrilling, too. But it's not enough to put this one in the boxing pantheon. Or even enough to make it worth your time, really.