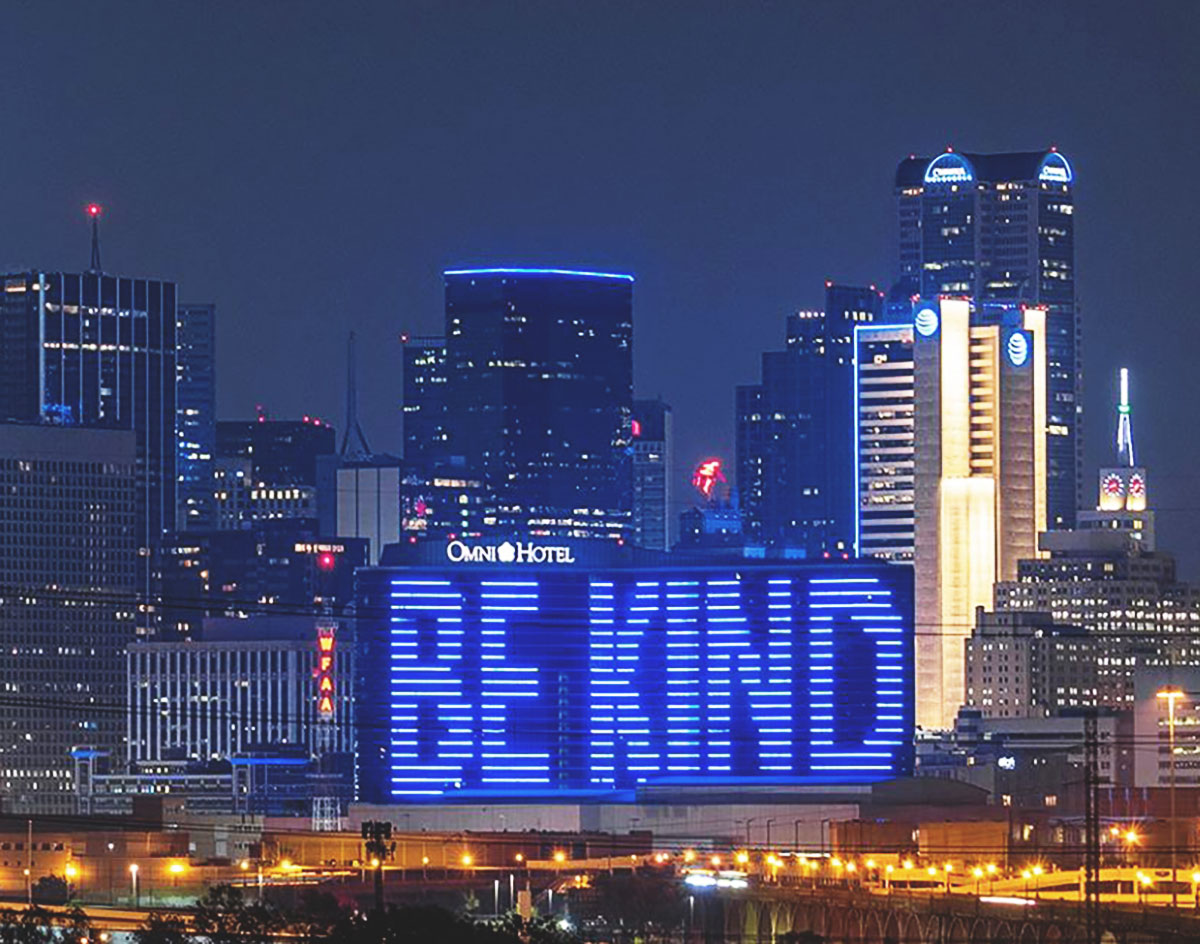 In Support Of Black Lives, Dallas’ Reunion Tower Went Dark On Tuesday For Just The 2nd Time Ever. A New Petition Now Asks Other City Landmarks To Step Up.

Update at 3 p.m. on June 3, 2020: The organizers of the below-detailed campaign and petition say they have been contact by representatives of the Omni Hotel, who have expressed interest in sharing this message. They have acknowledged that they say they can’t put anything up without city approval.

We have alerted officials within the mayor’s office to this petition’s existence and of the word passed on by the Omni. The ball would now seem to be in 1500 Marilla Street‘s court.

Update at 4:45 p.m. on June 3, 2020: A representative with the mayor’s office has responded to us and said the Omni Hotel does not require their approval to post any message it wants.

This is now a game of hot potato. Neither party wants the ball.

On Tuesday night, Dallas’ famed Reunion Tower showed a significant show of support for black lives and citywide demonstrations against police brutality by turning off its lights — something the landmark had only done once previously in its 42-year history.

In social media postings announcing the decision, the operators of the tower said the building “stands for people – all people. The time is now to engage with compassion, patience and understanding.”

Ostensibly, the decision was part of an international, and largely social media-based, awareness campaign branded as #blackouttuesday. (Problems with this campaign’s potential social media ramifications aside, the tower’s real-life darkening remains a powerful sentiment.)

But some believe Dallas’ notably LED-abetted skyline can and should still take things further.

On Wednesday, a Change.org petition was launched by Dallas concert promoter Josh Smith that asks for more Dallas landmarks to follow Reunion Tower’s lead. Specifically, the petition requests that Reunion Tower’s neighboring Omni Hotel — a building capable of, and with a long history of, sharing important messages in trying times — to bear the message “Black Lives Matter.”

It is by no means an out-of-line ask. As we’ve reported in the past, the people in charge of the Omni’s LED lights and the Reunion Tower lights often coordinate their efforts in the name of the Dallas skyline bearing unified messaging.

In a statement pointing out the hotel’s history of celebrating the city’s many sports-related and social accomplishments, the petition ends its plea with the following words: “In times of strife, [sharing] statements such as [‘Black Lives Matter’] can change the morale and the mood of an entire city. The Omni can make a show of solidarity and serve as a powerful vessel for change by displaying those 3 words.”

You can lend your name to the petition right here.