On The 2021 Oak Cliff Film Fest & Returning To Theaters. 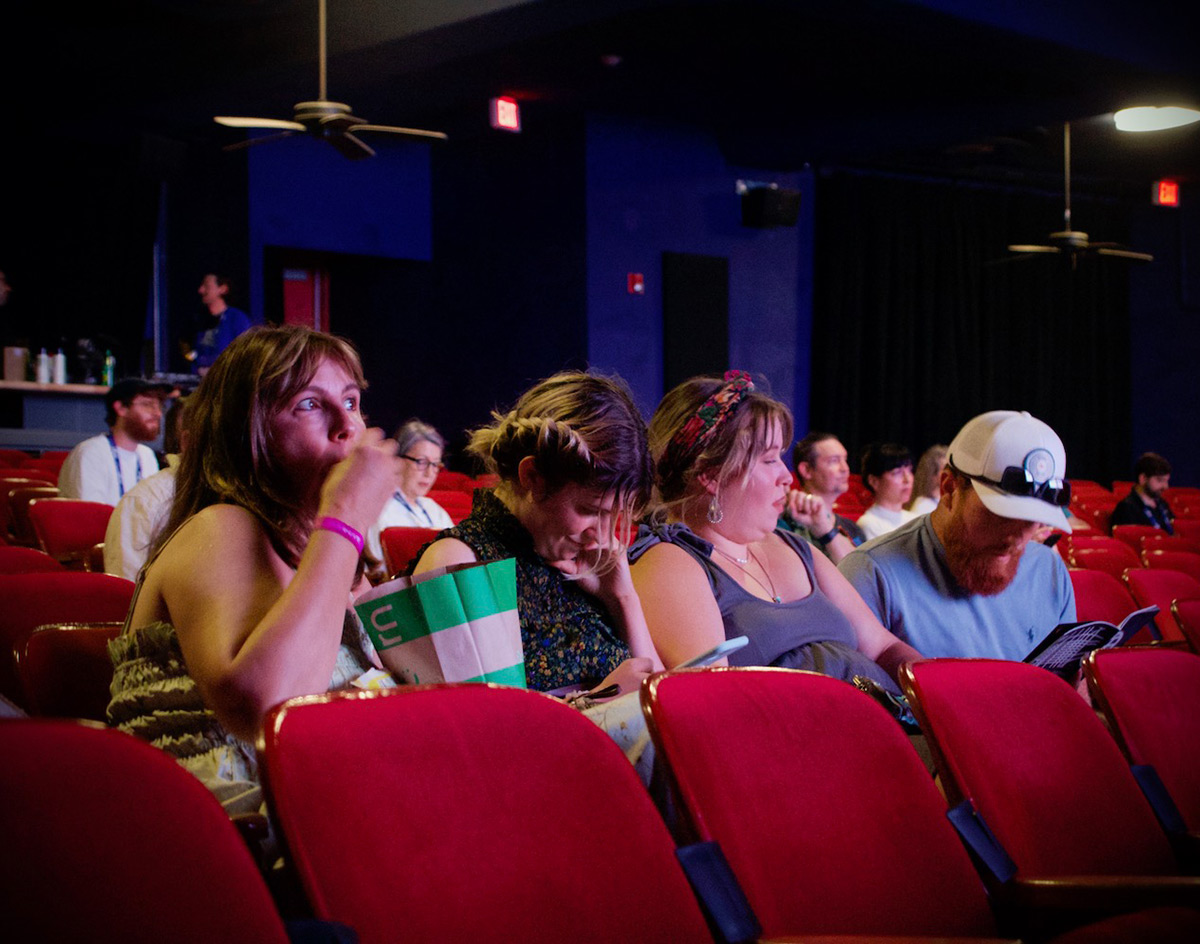 After Taking A Year Off In 2020, The Oak Cliff Film Festival Returned In A Big Way In 2021 By Showing The Power Of The In-Person Moviegoing Experience.

It’s the second night of the 2021 Oak Cliff Film Festival, and film director Todd Stephens is sitting in the Oak Cliff Cultural Center. It’s very quiet — a big contrast to the afterparty happening up the street.

He’s beaming, and rightly so. His new film Swan Song just screened at the historic Texas Theatre next door to an audience that really connected with it, audibly reacting to every flamboyant quip and heartbreaking moment that filled the movie’s runtime.

It went about as well as he could’ve hoped. 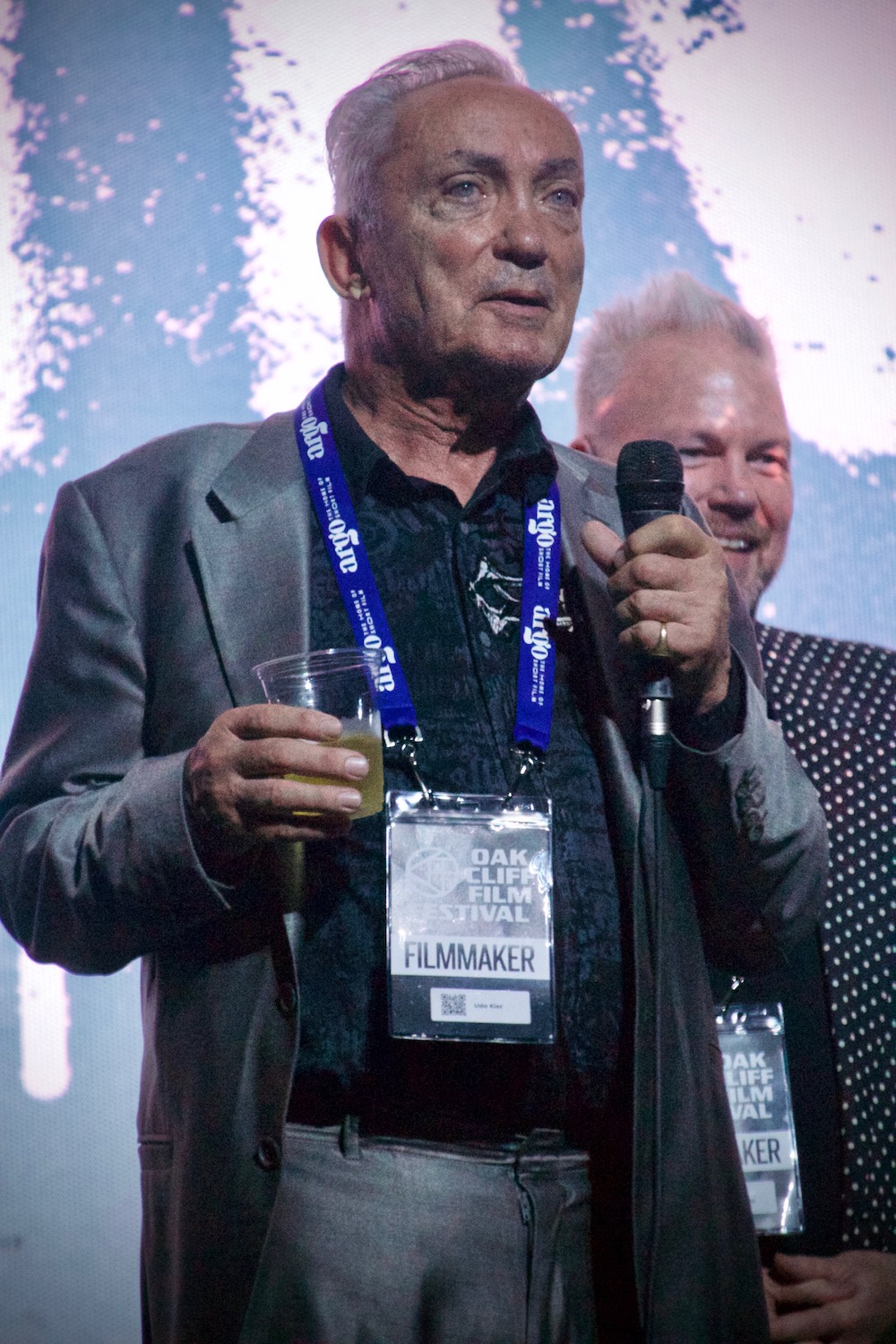 The same can be said for the film’s star, the iconic Udo Kier, who himself is taking a break from the festival party scene to saunter up to Stephens and gush about what he’d just seen through his own signature, striking blue eyes.

“I love what you did,” says Kier, 76, who film fans will recognize from his work in Suspiria, Blade and My Own Private Idaho. “It was basically my swan song. Every moment of the film was true; there’s no fake moment at all.”

Kier already said as much at the post-screening Q&A, really. There, chardonnay in hand, he detailed multiple times how proud he was of the whole crew’s work on the film. Now, though, he’s really making sure to drive that point home.

Moments like these only happen at film festivals, where fans and creators can freely mingle with one another and bond over a shared love of the medium.

This past weekend’s 10th annual Oak Film Festival experience can be boiled down to one word: connection. It’s what moviegoers and movie makers alike have been deprived of during the last year and a half that our society spent diligently social distancing. Sure, it’s still exciting to queue up a new movie on your favorite streaming service, but that experience just doesn’t compare to seeing that same film on an absurdly large screen in a dark room filled of similarly geeked-out strangers.

After the coronavirus pandemic forced its cancelation in 2020, the Oak Cliff Film Festival’s 2021 return was met with open arms, eyes and ears by film-loving Dallasites. Even with mindful precautions put in place, including reduced capacities and masked-up staffs, this year’s return festival welcomed an attendance larger than the 2019 edition. In all, those fans were offered the chance to experience together a run of 34 short films and 23 full-length films (15 of which were having their Texas premieres) across five venues and four days in Oak Cliff. 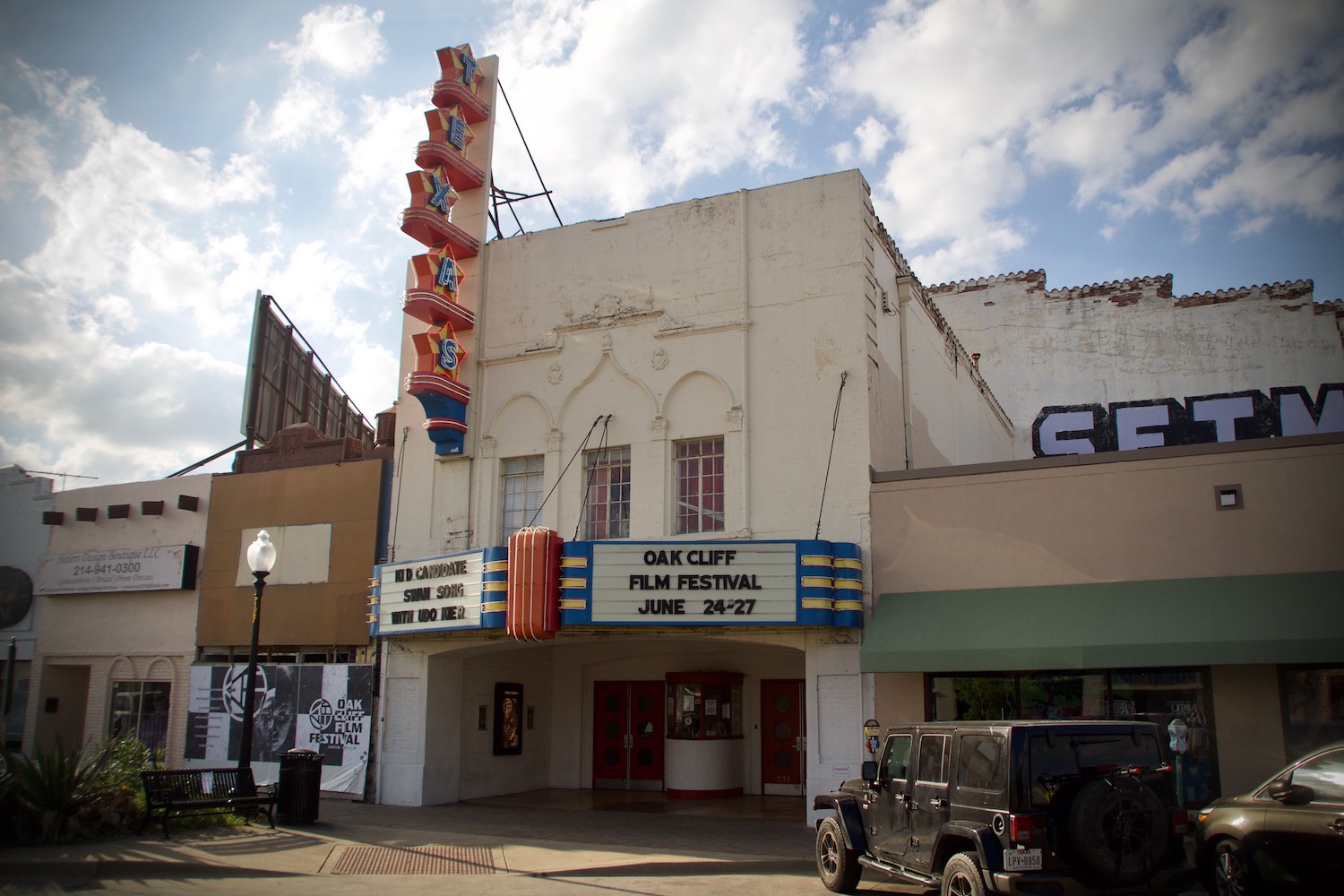 The Texas Theatre serves as the sun around which the Oak Cliff Film Festival revolves.

Being the first post-pandemic festival back, there was a reignited spark to the entirety of the proceedings. For filmmakers who spent the last year forced to host virtual screenings (if even that much), this event provided an opportunity for them to once again sit alongside crowds watching their works on the big screen.

“You spend years making a film and you wait for these moments when you get that connection,” says Stephens, the Swan Song director. “We were just really craving that.”

With the pandemic fresh in mind, many of the festival’s movies felt thematically very on-the-nose to the collective experience of the past year — including Stephens’ Swan Song, a dazzling, bittersweet story is about an elderly ex-hairdresser, who leaves his nursing home to provide mortuary styling on an old client and uses his journey to reflect on his adult life. Played by the recognizable Kier, the hairdresser is essentially quarantined at the start of the film, living a repetitive and restricted life in the confines of his fairly depressing room.

“We need to live while we can,” Stephens says of the film’s message. “Dance while we can. Tell people you love them and that you’re sorry because we’re not going to be around forever.” 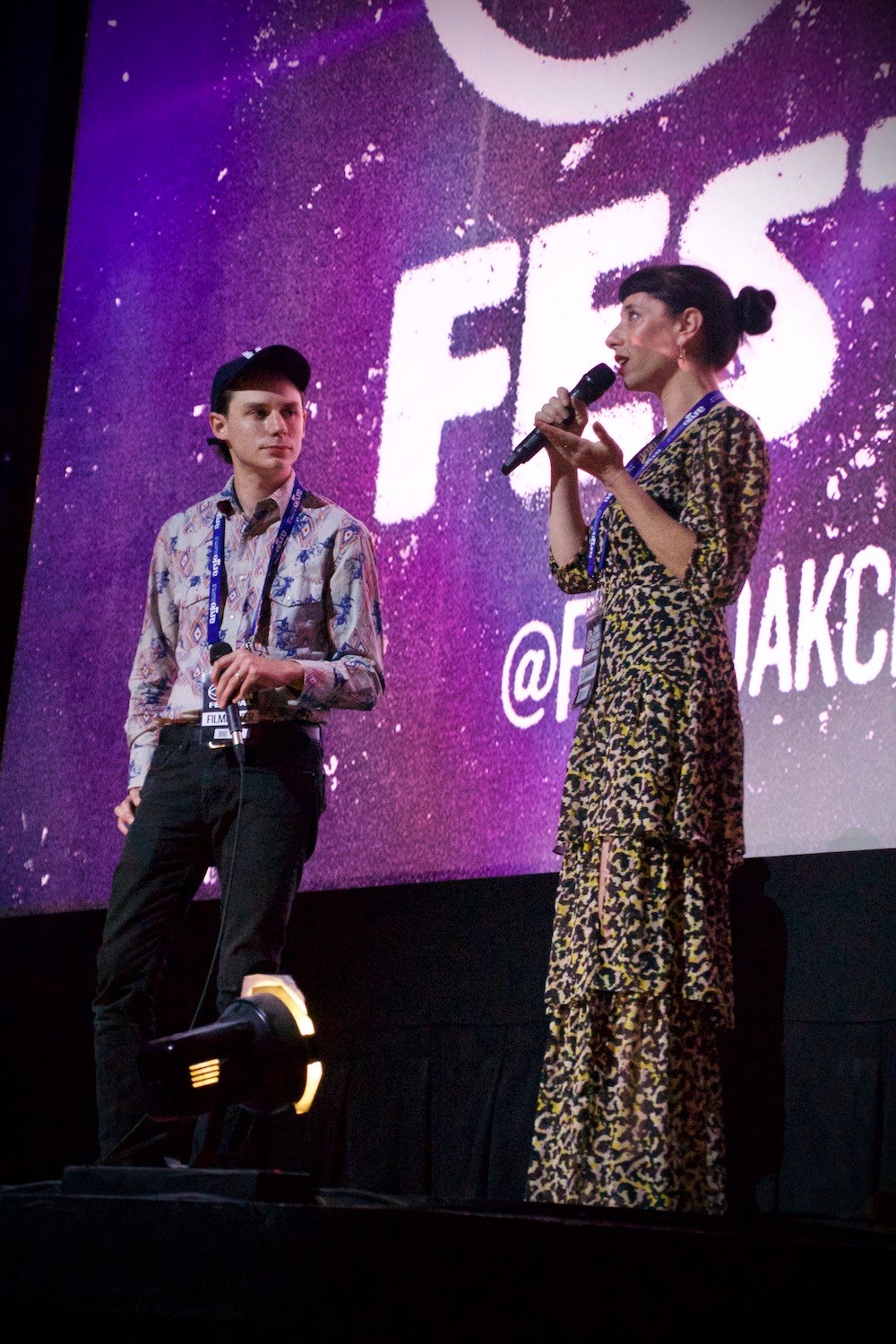 In addition to being alone with our thoughts, the pandemic also meant — for many of us, anyway — reconciling life under the mandate of a government that might not always have the backs of citizens.

The Oak Cliff Film Festival-screened documentary Kid Candidate felt especially relevant in this regard. With this film, documentarian Jasmine Stodel tells the story of Hayden Pedigo, a young musician who ran for Amarillo City Council at the ripe age of 24 in 2019. Pedigo’s journey centered around an Adult Swim-esque spoof campaign video going viral and turning what was initially intended as a fun project into a genuine political play to try and change his city for the better. By exposing Amarillo’s stealing of tax dollars and development discrepancy — sound familiar, Dallas? — Kid Candidate offers an eye-opening glimpse into the corruption of local government, as well as an inspiring example of how young people can help break the status quo and build a better future.

Plus, Pedigo just comes off as a damn sweetheart in the movie — and in real life.

“It’s one of those movies where — it sounds kind of cliché — at times you laugh to keep from crying in it,” Pedigo says following the screening of the film about his venture into the political fray. “I think, if people watch it, they’ll see their own hometown, wherever it is, and relate on a personal level.” 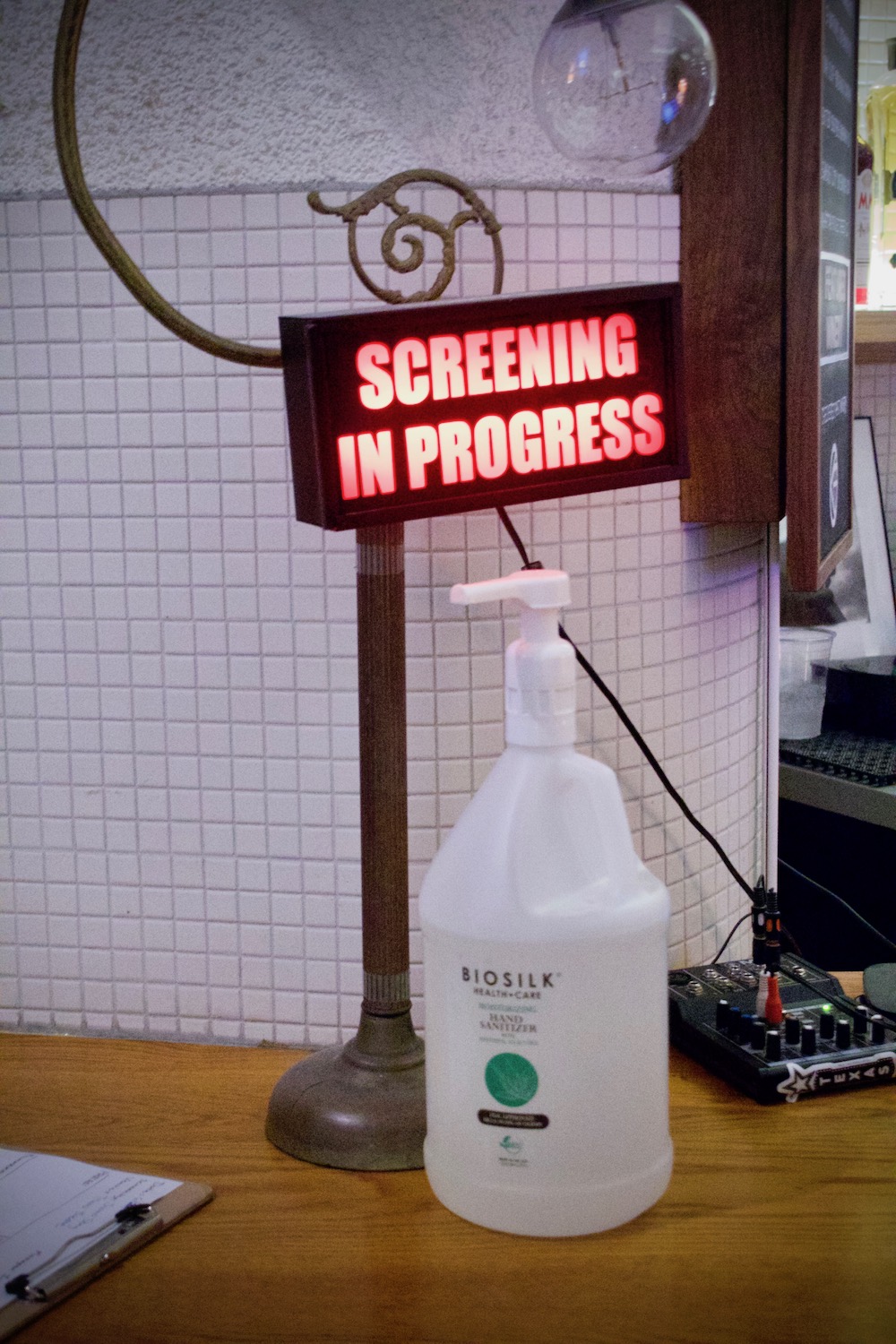 Sanitizer was one many precautions in place at the 2021 OCFF.

For all the glitz and glamour perceived in the film industry, filmmakers spent 2020 doing many of the same things the rest of us did. As the industry took a hit from COVID-19, with projects being delayed and movie theaters closing down temporarily, creators were forced to make due where they could. In Stodel’s case, that meant collaborating with her out-of-the-country editor over Zoom calls. In the end, though, she says the extra time the pandemic afforded her project ultimately led to a better film.

“It gave [the editor] time to put his own stamp on it,” Stodel says. “It definitely changed the tone of the film and made it more beautiful.”

The Oak Cliff Film Festival’s organizers can relate to that. Not only were they forced to cancel their 2020 event, but their 2021 version was also delayed a few weeks as they worked to ensure a properly precautionary and worthy offering for all involved.

“It taught us how to be nimble and quickly make adjustments instead of putting your head in the sand and waiting for things to get better,” says Barak Epstein, festival co-founder and director. “Also, you make adjustments for the future that are safe for everybody.”

In the end, the festival’s return felt not just safe, but filled with celebration — not just of film but of film lovers.

“You can do lots of things on the internet,” Epstein says. “But you want to sit in a room with other people. You can’t replicate that experience.” 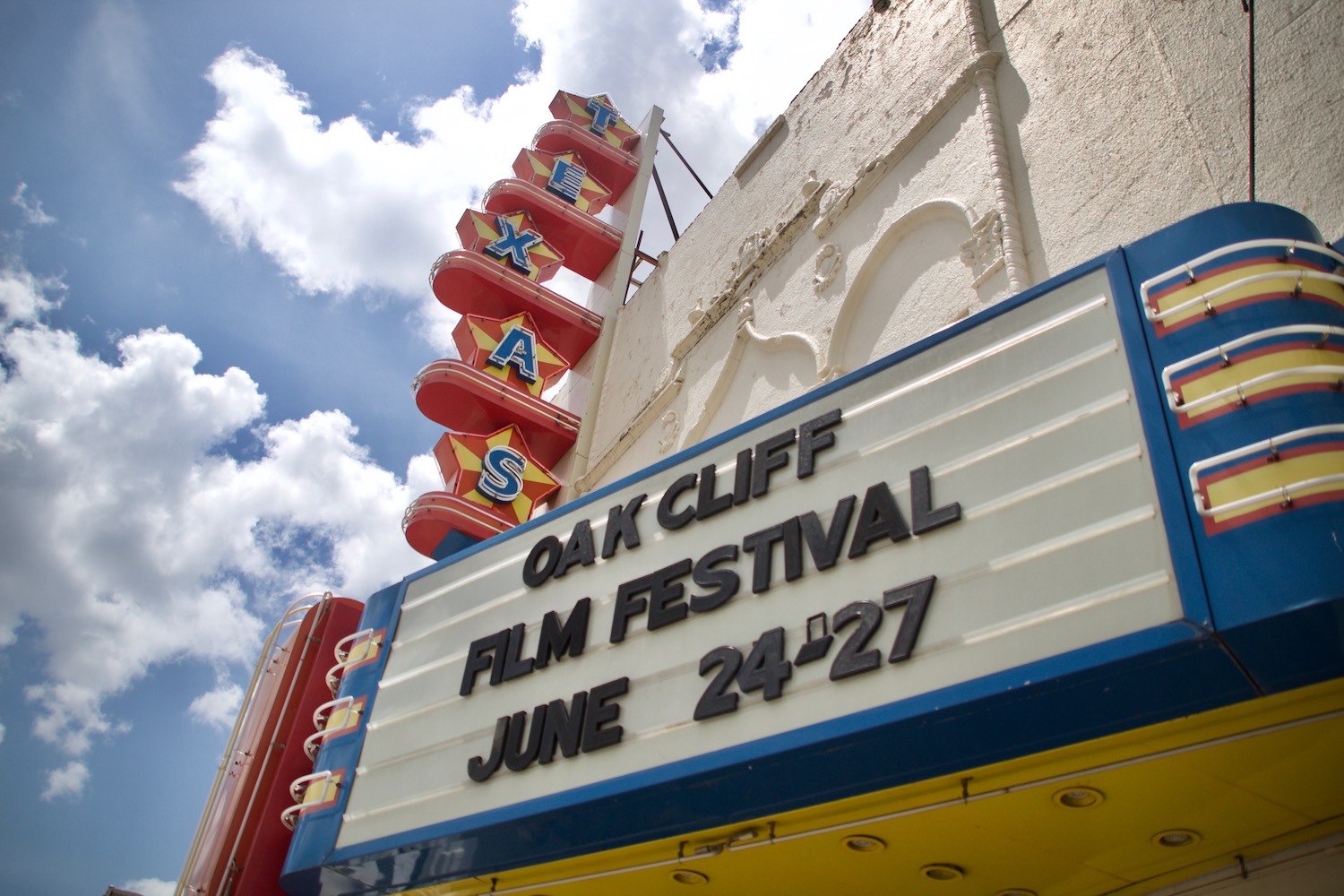