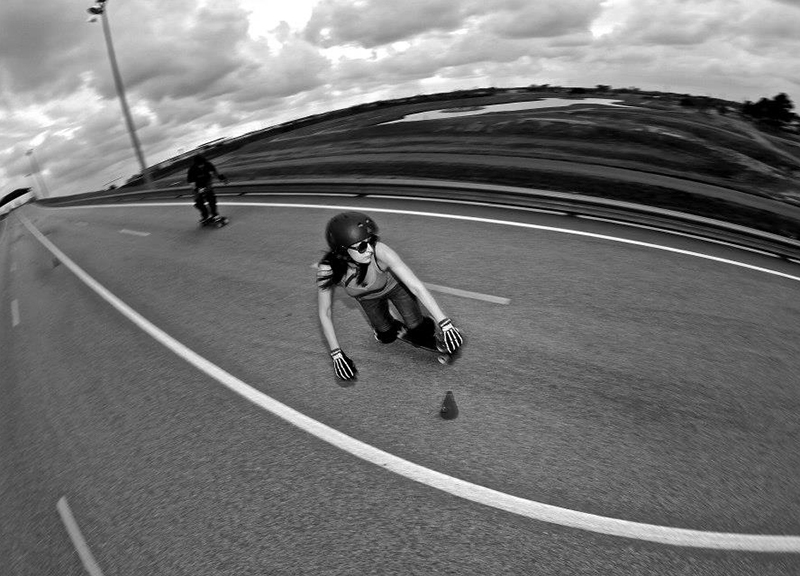 Deep Ellum's Favorite Barista Is Also The No. 1-Ranked Female Slalom Skateboarder In The World.

Madison Prez is a fast learner. It turns out, she's an even faster skateboarder.

At 27, Prez competes — and, let's just say it, dominates — in slalom skateboarding tournaments across the country.

The thing is, she didn't pick up her first skateboard until she was 25.

But Prez hasn't let her late start hold her back. Just two years into riding, she's already made some huge waves in the sport. Currently, Prez is No. 4-ranked female in the International Slalom Skateboarding Association's World Rankings — but those rankings, it should be noted, take into account the past five years of competition. Look at the 2014 season alone, and Prez currently stands as the No. 1-ranked female slalom skater in the world – and the lone American in the top 10.

It's impressive stuff, for sure. And, given that she's already adored and well-known in Deep Ellum thanks to her many years of offering smiling service from behind the counter at Murray Street Coffee, we decided we had to talk to her more about her recent feats — especially since she's about to leave town and move to New Orleans.

But more on that later.

How'd you get started skateboarding?
I guess I started about two and a half years ago really skateboarding. Before that, I only ever had a longboard and really didn't ride it much. My boyfriend Paul has skateboarded since he was a little kid. When we started dating two and a half years ago, he was a key holder at Guapo skatepark. Through that, I was able to go and basically have the whole park to myself. I'm 27 and started at 25. That's rather old for skateboarders.

Yeah, most retire at 29.
[Laughs.] Right! [The access to Guapo] sort of gave me the space to fall and not be ashamed and just really try something. My boyfriend was also doing slalom skateboarding, traveling to races. I went along with him to one in St. Louis and was there to just hang out. I was watching them practice. Eventually, I was talked into trying it. Then I was talked into entering the race. And by the end of the week, I came in second [place]. That was pretty cool. I've been into it ever since, still traveling with Paul to the races and doing my own thing now, too. People have been super supportive, helping me get set up with gear, mentoring me a bit and giving me lots of tips and guidance. I've had a couple of boards custom-made for me because the slalom boards I find are way too big for me to turn because they are made for men. So I've had a lot of help getting gear really dialed in for me, being a little bit smaller than people who are doing it.

What's your current setup?
For slalom, I ride this custom deck. It has really crazy trucks — they are Precision Trucks. I have radical ones that aren't even made anymore. But honestly, I'm so bad with gear and dimensions. I've just started learning how to tweak my setup. [Laughs.] There's three different disciplines slalom: giant, tight and hybrid. Just like, changing out your bushings or tightening up your trucks a little bit really makes a difference in making a course and not. And I'm finally getting good enough to understand all of these things, which is also really empowering and exciting. I haven't reached my full potential. I'm still getting better all the time.

There's always room for improvement for any kind of art, especially skateboarding. I like what you said about tweaking your trucks and the board. That was always a challenge for me growing up. I could never get it right. The trucks were always too tight or too loose. I have small feet, so the board was always too big.
It's kind of the best thing, being not very good sometimes! And maybe you can understand this being a street skateboarder: Every time I go to the skatepark, there's this epiphany. I go a little big higher or a little bit faster. It's so fun learning.

Since you're fairly new to skateboarding, are you intimidated when you go to skateparks?
[Laughs.] All the time! For sure. When I go to a public park, which we do a lot, I feel like I get sized up immediately. Nobody will be skating the bowl, and, when I go to skate the it, there's suddenly a pack of people there. I'm not sure if they are there to make sure they are better than me or because I'm a girl. Maybe that's not it at all.

I think it's probably a mixture of both, plus some curiosity. There's so many women really kicking a lot of ass in the sport now. I think it's great.
Yeah!

Do you skate vert, too?
I do a little bit. I'm trying to do everything. I skate street, I skate transitions. We are also key holders at Overground — they have a vert ramp out there. So, once or twice a week, I'll go skate the vert ramp.

What's your favorite parks in Dallas?
I really love Overground, I love the variety. You have the vert ramp and the stuff inside. Probably Lewisville [Scion Skatepark], too. It's big and fun. There's a lot of variety and elements out there. That's where we went this morning!

What's your favorite style of slalom skateboarding?
Giant is usually on a bigger hill and the cones are usually spaced further apart, so you're going faster on that one. It's probably my favorite to do because, well, it's not necessarily the one I'm best at because, in giant, there can be a big weight factor. But it's surf-y and I have a very surf-y style of skating.

I saw that you got the chance to skate with 2003 World Slalom Champion Judi Oyama. Who are some other skateboarding heroes of yours?
Rodney Mullen is probably my favorite male skateboarder. My other favorite current skateboarder is probably Ben Raybourn. He's from Houston and is just the most creative skateboarder I think — aside from Mullen — that I've ever seen go so hard. I also really admire all of the female skaters that are ruling so hard right now. Alana Smith is just killing it. When I was out in California, I got to meet her, Mimi Knoop, Samarria Brevard, Nora Vasconcellos and all of the women are who building the sport up for us. It was the coolest thing.

I know you're moving to New Orleans soon. What are your future plans with skateboarding?
So, when we were looking for an apartment and houses in New Orleans, we knew we weren't going to have the same sort of access [to skateparks] that we have here. One of the criteria for the house we're renting was that it had to have a backyard big enough for a mini-ramp. So I definitely plan on continuing to skate. But bigger than that, what I really get excited about is helping other girls get into skateboarding.

That's awesome.
Right now, before I move, I have a package to send off to Kentucky. I met this girl at this last race. She saw me skate and was really into it. I took a little bit of time, set up cones and taught her how to Slalom. Then I took an old deck of mine and had my dad cut it down into a mini-version of my slalom board because she's, like, eight. With all of the gear I picked up over past races, I was able to set her up with a complete deck, gear and an old helmet of mine. Whenever I get the chance to skate with other girls, it feels so different than kicking it with the dudes, which is fun also. But women communicate a lot differently and no one wants to be told how to skateboard by their boyfriend. They get into it through their husband or boyfriend, and that's cool — it's great to get started no matter how it happened — but I want to create more opportunities for women.

So you're paying it forward.
Yeah. There's a picture of this little girl and I riding down a hill together. It was probably one of the most memorable moments I've ever had on a skateboard. We race in the middle of this giant park in St. Louis, and this little girl's family was having a big barbecue in one of the nearby pavilions. She wandered over and was standing on our boards in the grass, and so of course I grabbed her and gave her a ride down the hill. I could tell that, for some reason, she didn't quite have the words to communicate with me, but it didn't matter. All she wanted to do was walk back up the hill and do it again. So we did — and so many times until eventually her dad tracked us down and explained to me that she was autistic. It was just cool to see what a freeing thing a skateboard can be. 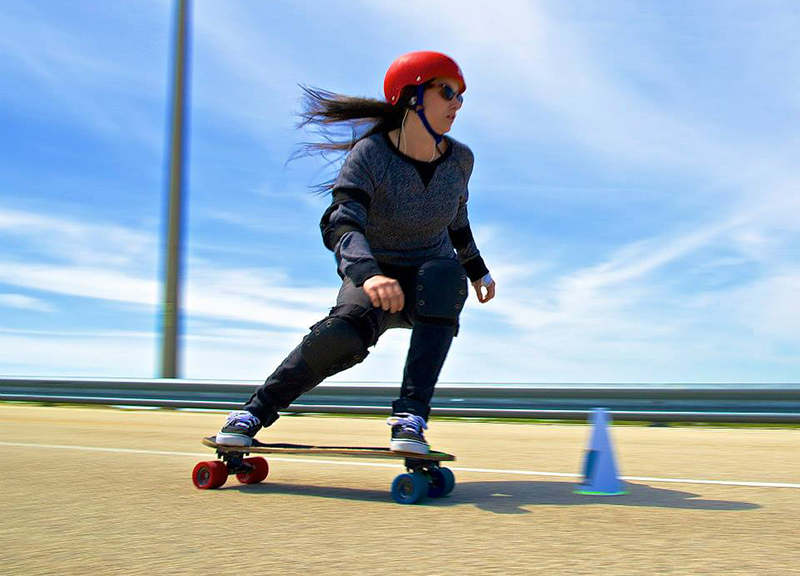 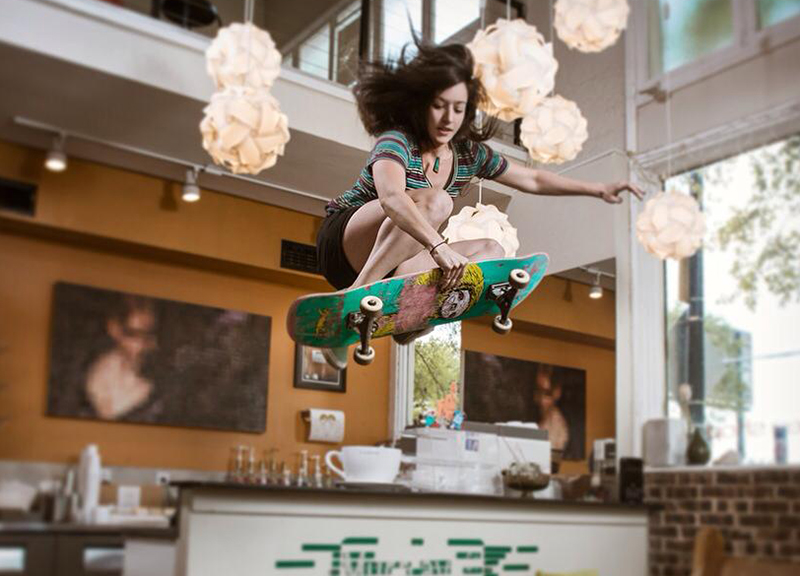 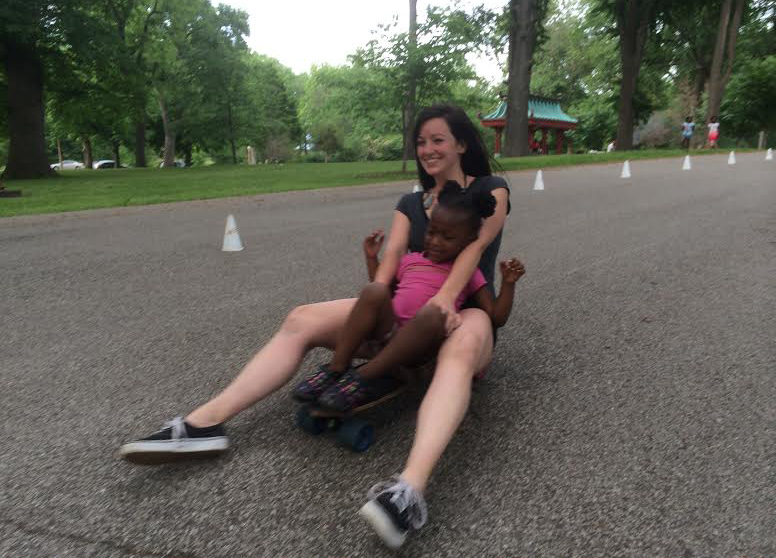