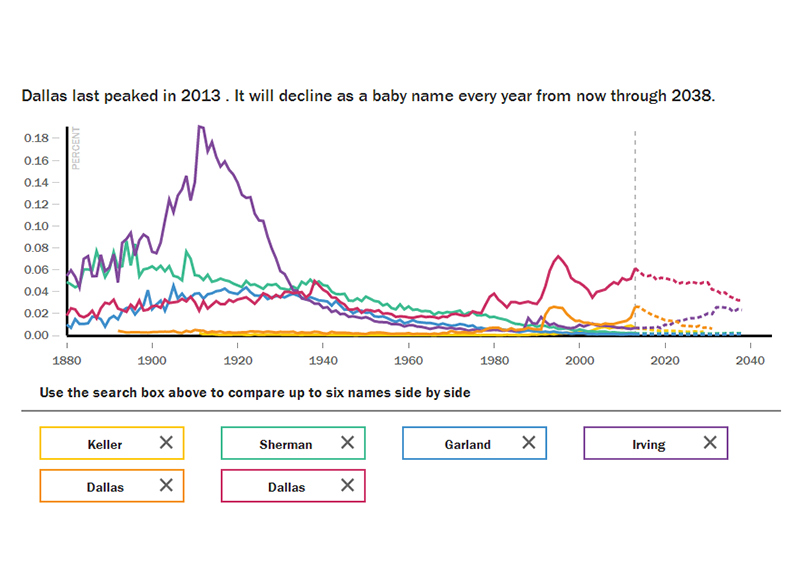 Dallas Has Likely Peaked As A Baby Name. But Irving's About To Get Popular Again.

On Sunday, Time published this really cool piece from Chris Wilson about the cyclical nature of popular baby names — like how the name Madison has given way to Miley as one of the most popular girls names, and how old favorite Evelyn is on an upward tear once more.

It's all pretty fascinating stuff, especially when Wilson extrapolates his research to predict which names are likely to increase in popularity and which ones are about to dwindle down to nil. Even better is the fact that Time took all this research and put it into a predictor app where users can check and see whether various names are upwardly mobile or if they've already hit their peak.

It's definitely a fun tool to play around with, and the information included in the piece about the rise and fall of the name Madison got us thinking about folks who share names with cities in North Texas — of which there are a surprising amount.

According to Time, the name Dallas — though again on something of a rise for both males and females — hit peak usage in the later '90s. The name Irving, meanwhile, hit its highest point in pre-Depression America. Same goes for names such as Garland and Sherman. Keller, on the other hand, has only risen in popularity as a boys name since the turn of the millennium.

But whereas Dallas, Keller, Sherman and Garland all seem destined to die off soon — Dallas, as a boys name, won't start picking up in popularity again until 2038, Time predicts — Irving is on the precipice of a major resurface.

Check it out what we mean in the below graph, provided by Time's app. Then go play with it yourself right here.