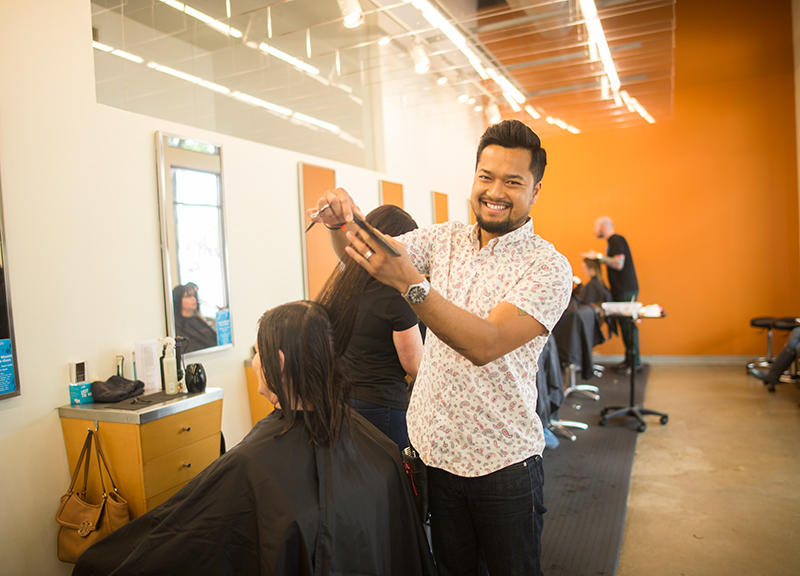 The 10 Coolest Barbers and Hairstylists in Dallas.

There are few things in life as exciting as getting one's hair did.

Of course, depending on who's doing the job, it can also be one of the more terrifying life experiences we all face. One wrong cut, and you're looking at potentially being stuck with an awkward 'do for months — or, worse, a trip to the wig outlet.

And, to think, most of us stumble upon our barbers of choice by word of mouth or the even-less-reliable world of Yelp reviews.

Sure, a five-star review can tell you a lot about the quality of someone's skills with a pair of shears. But what's not accounted for is how cool your barber is. And let's face it: Since you're going to be spending a lot of time around these people, the innate hipness of one's stylist is definitely not to be discounted.

To that end, the following list of the 10 coolest hairstylists and barbers around town are far more than simple hair wizards who can work magic with the tools of their trade.

Name: Savaday “Savy” Ty.
Shop: Creative director at Avalon Salon & Spa (West Village).
Professional experience: Eight years.
Specialty: “Shapes for hair — all shapes. I like to match the [hair's shape] to a person's facial shape.”
Best tip he's ever received: “Tickets to a football game, a Cowboys game.”
Most annoying things he deals with as a hairstylist: “Since I do education here, just how people rush through haircuts and don't do things technically right with haircuts — like some of the younger stylists. It's like almost a pet peeve of mine. And messy people.”
Why he made the cut: He doesn't own the salon he works at, yet he gets away with charging $10 more than any other hairdresser there for a women's haircut. So you know he's good.

Name: Miriam Ortega.
Shop: Owner/stylist at Studio 410.
Professional experience: 13 years.
Specialty: She says color is her specialty, but after looking at her Instagram, we'd say her niche is more long, loose waves paired with ombre coloring, specifically. Also, she's probably the best person you can go to if your hair is crazy damaged and you want it fixed. Case and point? This incredible transformation.
Biggest mishap behind the chair: “One time, I was cutting my poor mom's hair and I meant to reach for the thinning shears at the time, and I reached for my [regular] shears, and I was going to thin out her hair, and I took out a chunk — a chunk! — of her hair . She started crying. But thank God it was underneath. That was like in the beginning — the very beginning — of my career.”
Number one thing you shouldn't do at her salon: Bring anyone other than yourself to your appointment, especially kids.
Why she made the cut: She's wanted to do hair ever since she was a little girl, and though her parents made her go to college, she only went for a year before she stopped going and enrolled herself in hair school — without telling her parents. And now she owns her own salon. Basically, she doesn't let things get in her way and she goes after what she wants. Also, she lets people barter with her. For example: She has one client who pays her in chocolates.

Name: Arturo Donjuan.
Shop: Barber at Sour Grapes' art studio.
Professional experience: Seven years.
Specialty: Traditional, clean-cut styles.
Best tip he's ever received: “I think the best thing I get is the experience. For example, I grew up listening to The Deftones — and I cut Chino [Moreno]'s hair now when he's in town! We've just become friends over the years, so I think the best thing I've ever received out of it is that friendship that I've built with him — and, of course, like concert tickets and stuff like that whenever they're in town. And the weirdest one? Y'know, weed, of course. I don't really smoke a lot of weed, but it's always cool just to have it. I like the smell of it more than anything. That, or you'll meet different people that do different things. For example, if my mom needs a kitchen counter, I know somebody. One of my clients does that. Or, my client's wife does this. So your clients know it all or do it all. It's cool. Cops and whatnot, too. Someone gets thrown in jail, you know who to call. Like, my mom, whenever she needs anything, she'll be like, 'Hey, does one of your clients do this?' And I'll be like, 'Yeah, this guy does it!' Then I'll call him.”
Biggest pet peeve: People who can't put their phones away while he does their hair.
Why he made the cut: Not only is Arturo an awesome barber who's done hair for some pretty prestigious people, but he's also an artist and part of Dallas' preeminent street art crew, Sour Grapes, and operates his shop out of his art studio. Also, although he's only been doing hair as a licensed barber since 2008, he started doing hair when he was in fifth grade for his brother and kids in his neighborhood.

Name: Josh Fleming.
Shop: Co-owner/barber at No Authority Barber Shop.
Professional experience: Five years.
Specialties: Classic barbery, pompadours, fades, women's short hair and curly hair.
Favorite haircut he's ever done: “I really enjoy the work that I do here. Like, I love doing pompadours and all that, but [in terms of] weirdness, most of my dudes are pretty conservative. I do some skin fades, which are a little less conservative, but it's still pretty dapper-type things. My ladies get a little odd. I did a bob that was completely shaved from above the ear down and then it comes down to this little Dutch-boy bob. Love that haircut! That was really fun. Making shit up can be fun, too. I do that all the time.”
Most intense conversation with a client: “We have a lot of intense conversations! I have a client who's my favorite person to talk to; I think he should run for president, even though our political views are a lot different. I still think he's super smart. I love talking to him about stuff. Y'know, he's a lawyer, he's ex-military — he knows his shit! So, that's the one time I'll be like, 'Yeah! Let's talk about politics!' But mostly, this is kind of a man cave, and I really want everything to be very confidential. I want people to trust me when they come in here. They can talk about anything. I've had all kinds of different stories that are really fucking weird, but it's a good feeling because it means your clients trust you and respect your opinion.”
Why he made the cut: A local musician by night, Fleming has a nice little collection of whiskey and vinyl records in his shop for his clients to enjoy while getting their cut. Also, he will take your secrets to the fucking grave.

Name: Robert Wilson.
Shop: Owner/stylist at Live Hair Group.
Professional experience: 27 years.
Specialties: Bangs, dry-cutting, teaching and predicting future trends.
How he got started as a hairstylist: “I started coloring my mom's hair when I was about 10 or 11 years old. It was kind of our alone time — there were four of us — so me doing her hair was really kind of special for me. And I loved putting on the little gloves and mixing two things together and kind of guessing how it was going to turn out. And then I started styling my friends' hair to go roller-skating in sixth grade. I pretty much knew I was going to be a hairdresser at that point.”
Most intense conversation with a client: “It's usually my guy talks — talks with my guys. We'll try to whisper — in this room full of girls — about what they did last night.”
Why he made the cut: Although he's been a licensed hairstylist for 27 years, Robert is always keeping up to date with new trends and learning more. He also teaches, and education is a priority at his shop. In fact, he only hires stylists straight out of beauty school to ensure that no one at his shop is stuck doing one thing; he doesn't want anyone that's too set in their ways. Also, we once saw him rocking a purple beard, which is amazing.

Name:DeShone “D” Williams.
Shop: Co-owner/barber at Kutinfed.
Professional experience: 17 years.
Specialties: Taper fades, light fades and bald heads.
Most unique tip he's ever received: “A fake $1 million bill with Barack Obama on it.”
Biggest pet peeves: People who talk too much (i.e. even after their hair is done), and people who are late or don't show to appointments.
Why he made the cut: He's good about avoiding controversial topics like religion and politics — and, of course, he's very talented.

Name: Kaycee Clark.
Shop: Co-owner/stylist at Dear Clark.
Professional experience: 24 years.
Specialties: Naturally curly hair, layered hair, bobs.
Most unique tip she's ever gotten: “To have my aura read.”
Most intense conversation with a client: “After I read 50 Shades of Grey, I was talking to a client about it and she said, 'Honey, I live 50 Shades of Grey. I've been a submissive for like five years.'”
Why she made the cut: Not only is this girl one of the best and most experienced hairstylists in Dallas, but she also has her own hair product line with her business partner, Holly Dear. All the products are all-natural and made in Dallas, with most of the ingredients coming from Texas and none from outside of the U.S. The line can be found in Birchbox, Barney's (soon) and The Ritz-Carlton. Also, it was the official hair care line for the TV show Dallas.

Name: Leighannne Shelton.
Shop: Co-owner/Balayage specialist at FORM Salon.
Professional experience: Four years.
Best tip she's ever received: “I got a pair of Chanel sunglasses. That was my best tip. The weirdest was a bible.”
Most intense conversation: “I had one client who was having an affair on her husband, and he found out and killed himself. She was cheating on him with her high school sweetheart for their entire marriage. Then he found out and committed suicide.”
Biggest annoyance: “Unrealistic expectations. 'No' is my favorite word.”
Why she made the cut: Leighanne is not your typical hairstylist. A lot of stylists are specific in that they only cut or they only color, but Leighanne takes things a step further: She only does balayage, a free-form, French highlighting technique. And she's so good at it that, even though it's all she does and she's only been behind the chair for four years, she owns her own salon. On top of that, she graduated at the top of class with honors from Florida State with a bachelor's degree in clinical psychology, which basically makes her perfect for doing hair, since, as you've probably heard, hairstylists and barbers are basically therapists.

Name: Lauren Chambers.
Shop: Stylist at Hair by Charlie.
Professional experience: 10 years.
Specialty: She says she loves to cut and color all hair, but that she's way into men's hair at the moment: “A good haircut brings out a lot of confidence and so I like being a part of that with my guys,” she says.
Best tip she's ever received: “I had a guy who was a no-show who felt bad about it that he showed up with a cake that said, 'Sorry, I'm a jackass,' which is better than any tip ever.”
Why she made the cut: She can do it all — women's hair, men's hair, cut and color. Also, she's able to look back on negative experiences and laugh about them. 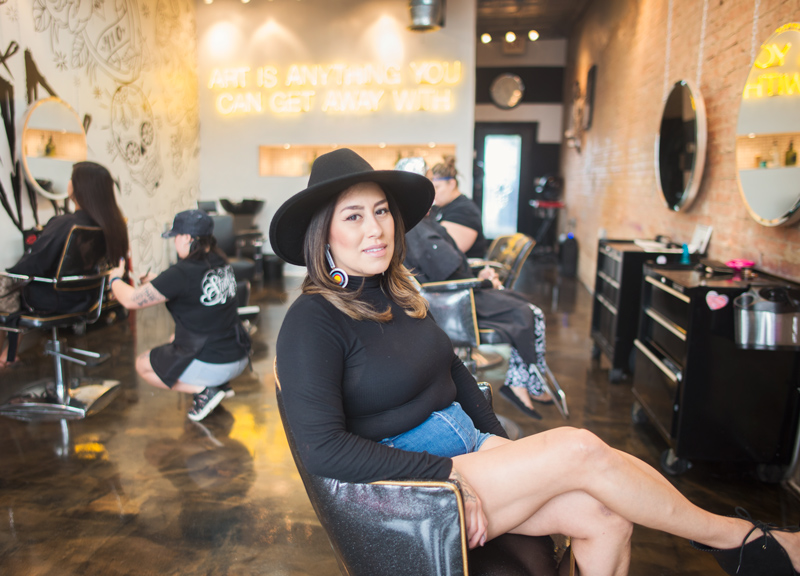 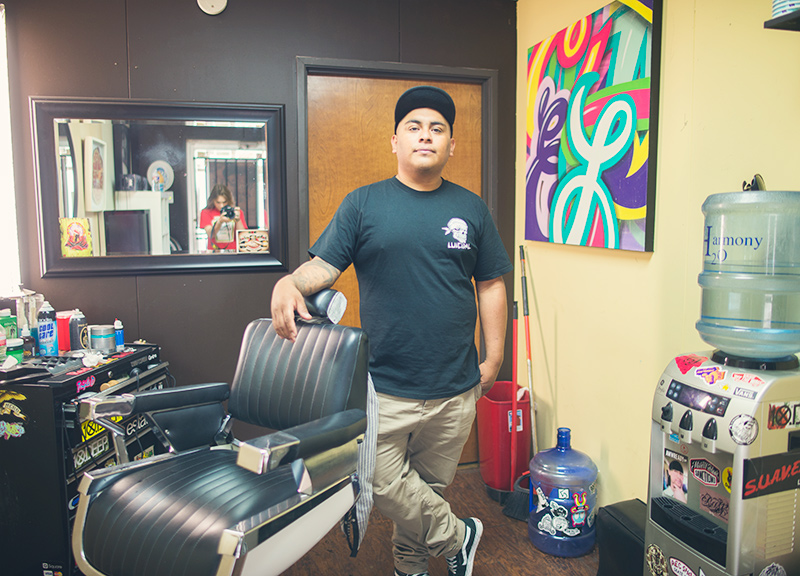 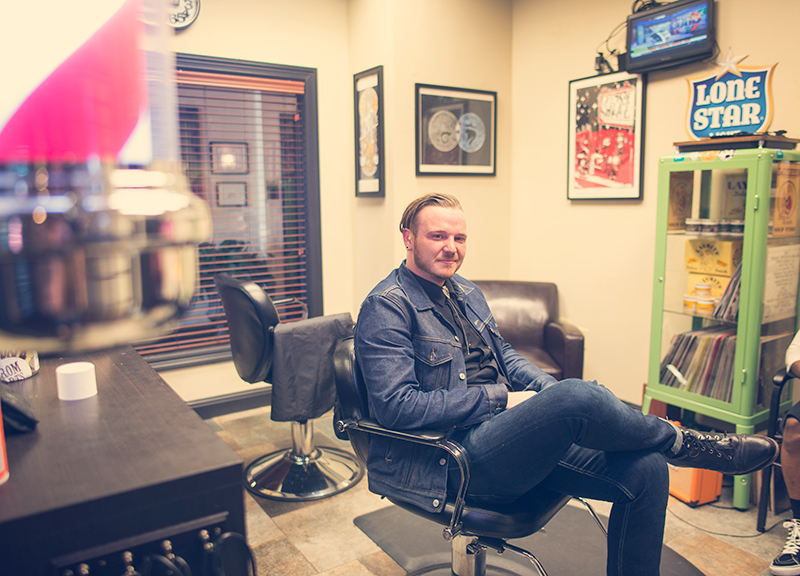 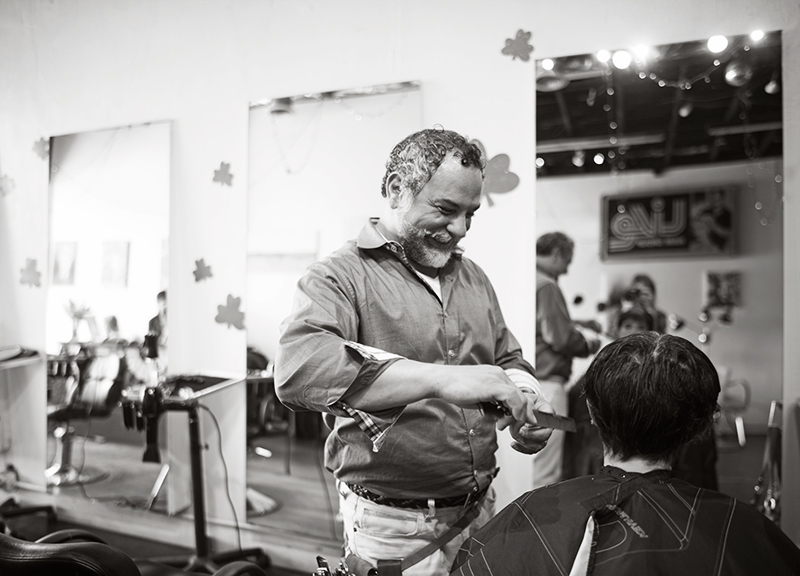 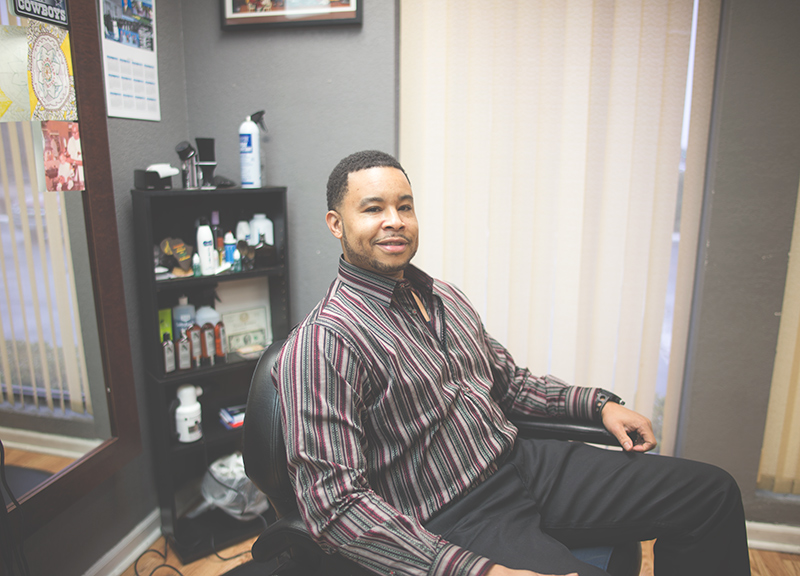 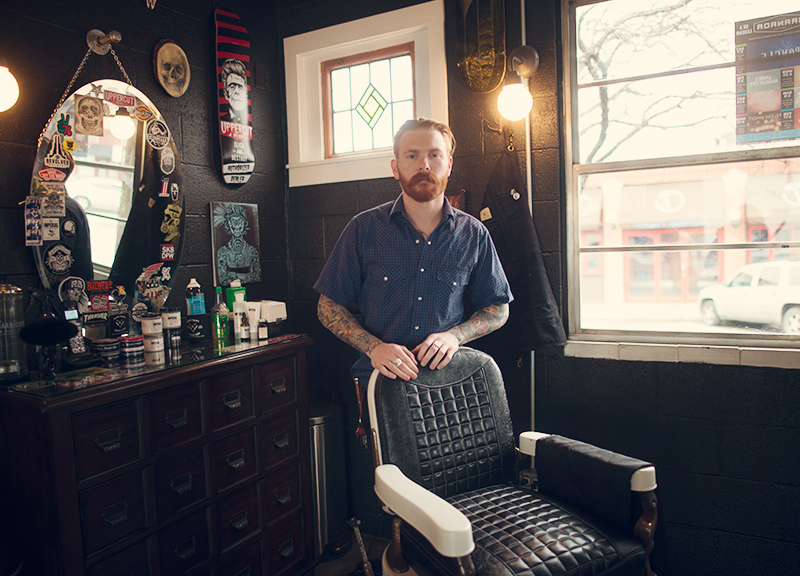 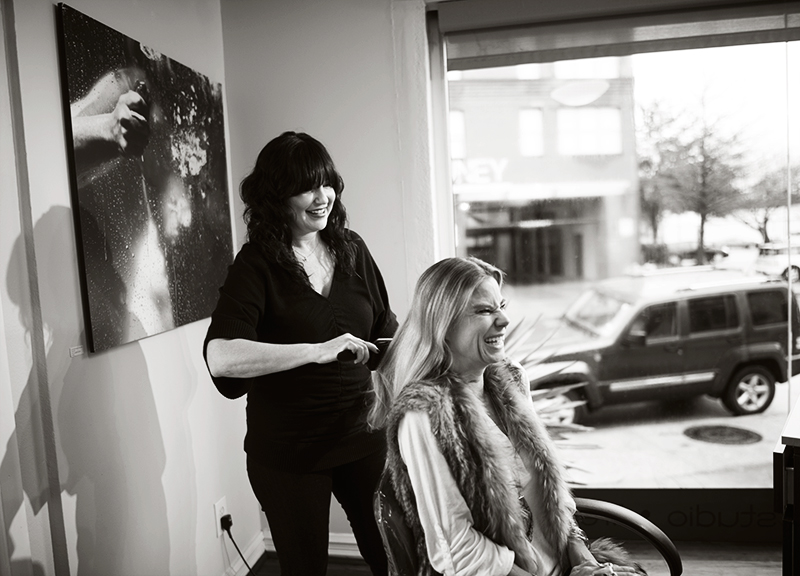 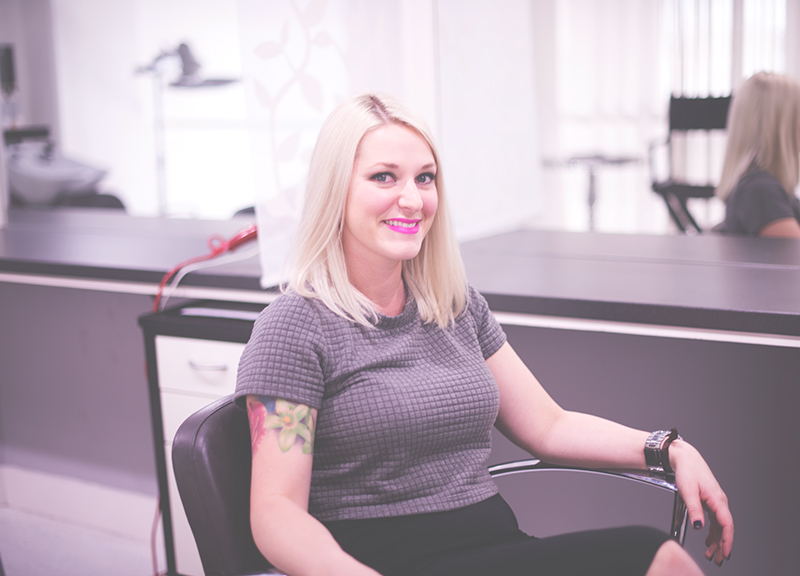 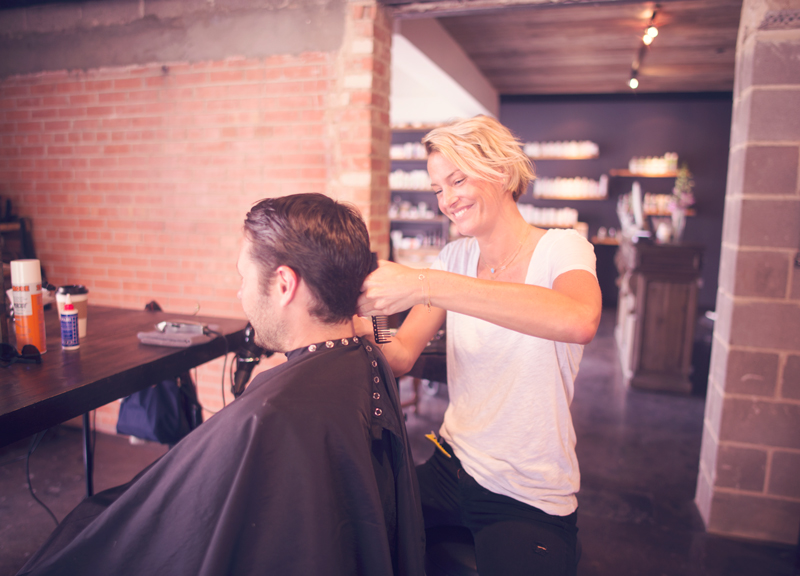