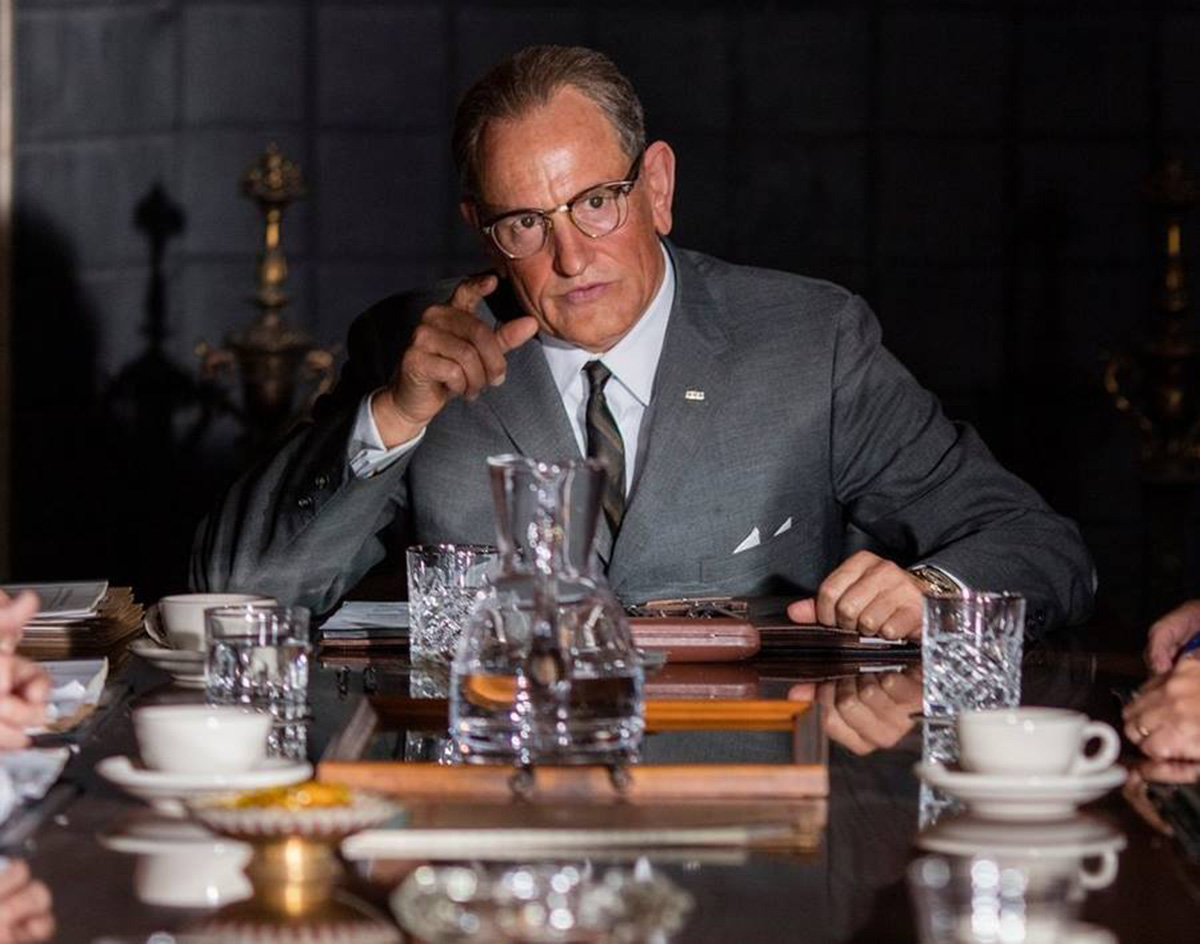 Why Can Pretty Much Every Aspect Of Woody Harrelson’s Life Be Traced Back To The JFK Assassination?

In an interview with the LA Times, Woody Harrelson wasn’t too keen on talking about LBJ, his Rob Reiner-directed Lyndon Baines Johnson biopic in which he stars as the titular character — even though it was, ostensibly, the reason for the piece running.

His stance, he says, has nothing to do with the quality of the film or his personal performance in it, which has received generally positive reviews. It’s just that, even after a well-received run at the Toronto International Film Festival, LBJ was having trouble locking down a distribution deal and found itself in danger of falling behind its hopeful 2017 release.

Or, well, maybe that’s just what they want you to believe.

Just as Dallas is reminded of John F. Kennedy’s assassination every year around the time of its November 22 anniversary, Harrelson’s career is somewhat inexplicably tied to the same event.

How so? Well, we’ve done some digging outside of the mainstream media sources and found a preponderance of evidence that Woody Harrelson’s entire life is actually just one giant conspiracy that can be linked back to the life and death of President John F. Kennedy.

The following truths about Woody Harrelson, we hope, shall set you free.

• Woody’s estranged father Charles Harrelson once confessed to being JFK’s real assassin. He’s believed to be one of the tree tramps photographed near the Texas School Book Depository on that fateful day, thought by many conspiracy theorists to be involved in JFK’s murder. While under arrest for another murder – we’ll get to that shortly – and allegedly high on cocaine, Woody’s dad also confessed to assassinating Kennedy, although that claim was later deemed impossible by the professional cover-up artists working for the FBI. Look it up!

• Charles Harrelson was the first person to assassinate a federal judge in the 20th century. United States District Judge of the United States District Court for the Western District of Texas John H. Wood Jr. was assassinated by Harrelson outside his home in San Antonio in 1979. It’s for this crime that the mob-affiliated Harrelson was convicted of and handed a life sentence. But it goes even deeper than that! Wood – his name is only one letter off from “Woody,” coincidence? — was appointed by President Richard Nixon. A decade earlier, you no doubt recall, Nixon narrowly lost a presidential bid to – gasp! – John Fucking Kennedy.

• Prior to killing Wood, Harrelson’s dad was tried in two other murder cases. His attorney for the 1968 murder of Alan Harry Berg was Percy Foreman, who had defended Martin Luther King’s assassin James Earl Ray earlier that year. Even more telling? Jack Ruby requested Foreman’s council after he shot Lee Harvey Oswald.

• Woody Harrelson’s mother’s maiden name was Oswald. Everybody knows Oswald is an uncommon surname. And yet it’s the same one as belongs to JFK killer Lee Harvey Oswald. Is this too much of a coincidence to be a red herring? Hmmm.

• When JFK was assassinated, his successor was LBJ. As we just learned, Charles Harrelson may have killed JFK. And now his son Woody has played the role of LBJ in a movie! Wake up, sheeple!

• Woody is his father’s son. The apple may not fall too far from the tree. Remember: One of Woody’s most famous roles came while playing a serial killer in Natural Born Killers. That movie was directed by Oliver Stone, who also directed 1991’s JFK. Freaky!

• The rule of five also applies. In 1985, Harrelson married Nancy Simon, daughter of playwright Neil Simon. In 1995, Neil Simon was awarded a Kennedy (!) Center Honor. In 2015, Harrelson began filming his LBJ movie, starring as JFK’s successor in the oval office. What are the odds?

• Woody Harrelson is a known 9/11 truther. He’s a member of Actors and Artists for 911 Truth. He was also one of the names attached to a crashed-and-burned 2013 truther doc that was to be called September Morn. Signed on to direct was one BJ Davis, whose first name you might notice is only one letter short of LBJ. Shocking!

• LBJ isn’t Woody’s first biopic. He also famously portrayed Hustler founder Larry Flynt in 1996’s The People vs Larry Flynt. Depicted in that film was Flynt’s famous full-page ad in the nudie mag that offered up a $1 million reward for bringing JFK’s killers to justice. Two weeks later, he was shot along with attorney Gene Reeves in attempted murders, bounding Flynt to a wheel chair to this day. If you don’t believe those things are related, I feel sorry for you.

• American Hero is a 1993 conspiracy theory novel asserting Operation Desert Storm was scripted and choreographed in order to secure the elder President Bush election to a second term. The book later served as the basis for the 1997 film Wag the Dog, which starred – you guessed it! – Woody Harrelson.

Folks, I don’t know about you, but I’m convinced: Woody Harrelson’s whole life is a JFK conspiracy!