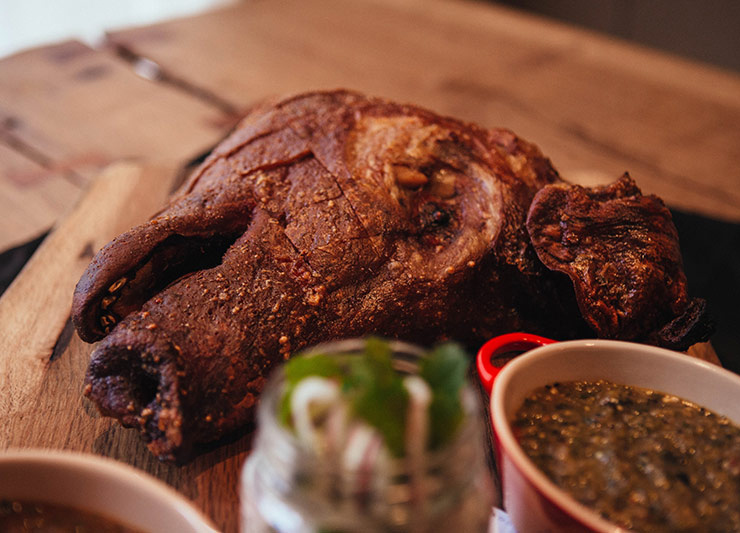 Wrap Your Head Around This Pork Offering At CBD Provisions.

CBD Provisions, which opened in the Joule on October 10 of last year, is precisely the kind of restaurant you'd expected to exist within a luxury hotel.

The decor is an eye-catching mix of western wood fixtures and pre-industrial metal works. The tables that seat family-sized groups are carved from slabs of wood, over which exposed Edisonian-era light bulbs hover from the ceiling.

The menu, however, is for the most part fairly simple — a mix of Texas barbecue, burgers and salsas.

Then there is the Berkshire Pig Head Carnitas. And make no mistake: It's an actual head, just as its name implies — one that's been cleaved from the shoulders of a Berkshire pig and split in two by a band saw.

If that sounds a bit macabre, well, that's because it kinda is. The half-head is served in its entirety to patrons, and it's still flashing its tooth-filled grin once it reaches the table. Really, most everything about the head remains intact come serving time.

That's because the eyes, tongue, ears and snout are all meant to be eaten straight from the skull.

But the thought of a dead pig staring back at you — while you eat its face, even — shouldn't deter you form ordering it. The dish is a labor of love straight from the mind of executive chef Michael Sindoni. And listen: The guy spent a whole month searching for the perfect way to cook it before adding it to the menu.

So you gotta figure it's pretty legit.

And, honestly, it is: The cooking process is what truly makes this dish so unique — perhaps even more unique than the fact that you just ordered that whole damn head be brought to your table.

Sindoni spends a full 21 hours making the sucker: The head, after being cut in two by the aforementioned band saw, sees its brains scooped out of its cranial cavity and its glands (described as chewy and bitter tasting) dug out from the precious layers of meat and fat; from there, it's put in an air-tight plastic bag and cooked in a bin of convection-heated water for 16 hours. The apparatus attached to the bin, called a thermal emersion circulator, ensures that the water remains an even 83.3 degrees Celsius (approximately 182 Fahrenheit) throughout. This process renders the fat to a smooth consistency and forces excess fat out of the skin, which is then captured in the bag. Once removed, the head is put in a bin of ice water to cool it and prevent it from overcooking once it's placed in the oven. After it's removed from the oven, the head is then served with two house-made tomatillo salsas and tortillas.

Eating this beast is a technique all its own, too. Every part of the head has a different consistency and texture: the ears are cooked to a chip-like crispness; the cheeks are tender and fatty; the tongue has a consistency similar to that of roasted duck; the eyes are chewy, fatty and flavorful. No part of this precious meal should be wasted, so diners will need to ditch the forks and get all hands-on with this hog.

So, yeah, it's kind of a behemoth. And that's why we couldn't wait to ask Sindoni about it.

When you designed the menu for CBD, what sort of things were you hoping to hit upon?
Texas. Sort of modern takes. A combination of modern takes on Texas classics, but also highlighting Texas ingredients.

Did you ever think of serving the pig head a different way? Maybe without tacos and salsa?
It just seemed sort of natural. It's trying to pay tribute to the Latin American heritage here. All of our dishes come from some sort of traditional dish. You've got the German Hill Country, you've got barbecue, you've got steakhouses, and you've got Latin American. Those are basically the main foods in Texas. So we try and base the whole menu on some version of one of those.

Did you ever at least experiment with different methods of cooking the pig?
Oh, yeah. We tried to do it confit. We tried to straight-up roast it. This took a solid month to get it down to the exact recipe.

What made you choose this method of slow cooking?
You can see that there is a good amount of fat, but a lot of it is rendered away. It needs the slow cooking. The fat renders out, and as the fat renders out, it's actually basting the skin. The thermal emersion circulator ensures it stays within a tenth of a degree Celsius. That's just so we know that every one is cooked exactly the same. The great thing about it is it can't overcook.

I noticed that there are no marinades or rubs put on the head before it's cooked. Did you ever experiment with a more complex recipe?
We have another pork dish that's got a million. It's got green chile, it's got a spice rub and it's braised with tomatillos and five different kinds of chiles. So I just wanted this to be very straightforward. All about the pork.

How many of these do you serve a night?
A weekend night, we will sell as many as 12. Weekdays, between five and eight. The thing is, I can't reuse it. So I'd rather sell out of it.

OK, so what is your personal favorite part of the pig head?
Let me show you. [Sindoni grabs the fork and begins peeling the crisp skin back to reveal tender strands of meat and flesh, right along the jaw of the pig.]

What part of the head is that?
I'm not sure! But I think it's part of the muscle that moves the jaw. It's amazing — and most people miss it. It's extra tender. It's got a lot of fat, but not chunks. The cheek is the part that everyone goes for, but there are hidden little pockets — like right below the ear. A lot of the time people will send it back and ask me to pick it apart for them.

But that takes all the fun out of it!
Yeah, it does. A little bit. But I'd rather that than have them miss something.

You said a lot of people go for the cheek. Do you find a lot of tongues being left behind?
No, people take it home. And, honestly, when we get groups of people from out of the country, they love it. And honestly we are educating people: It's meat, and you can eat it. 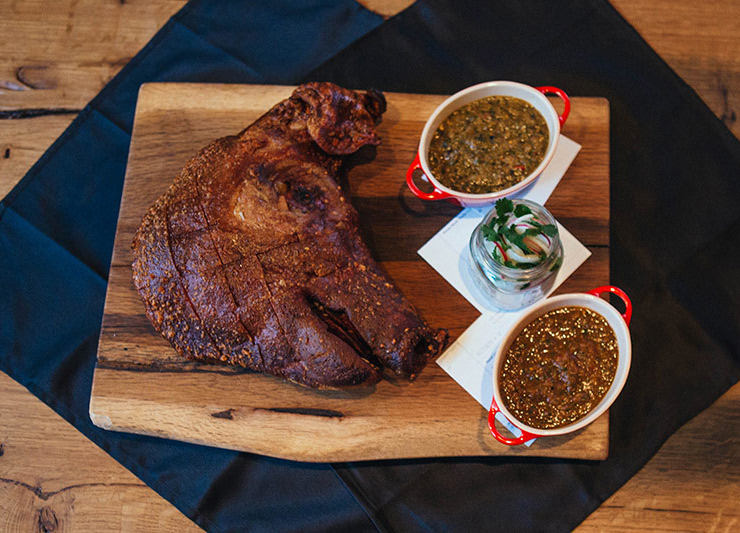 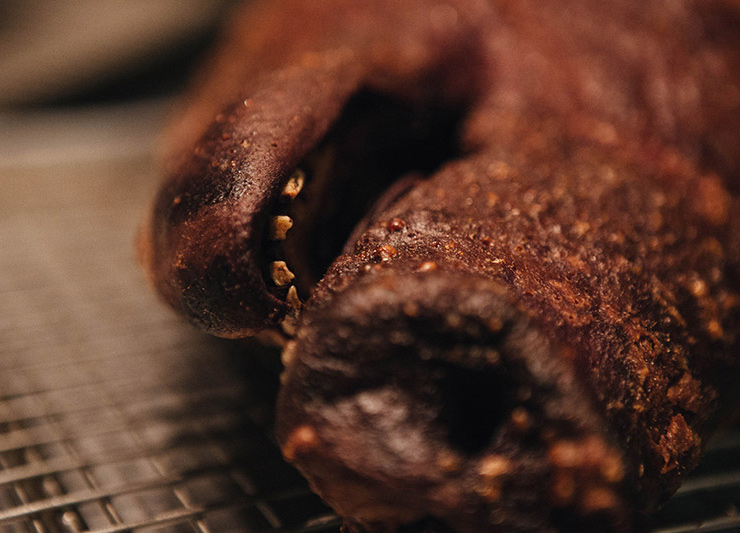 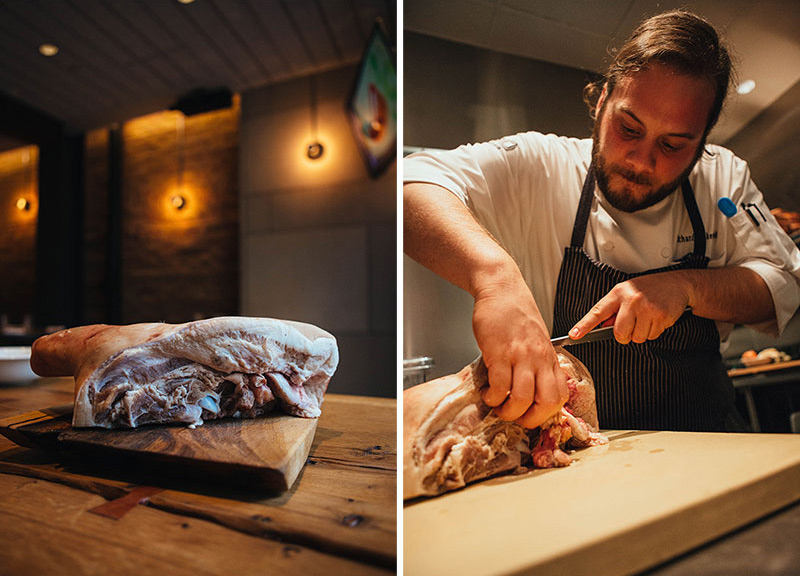 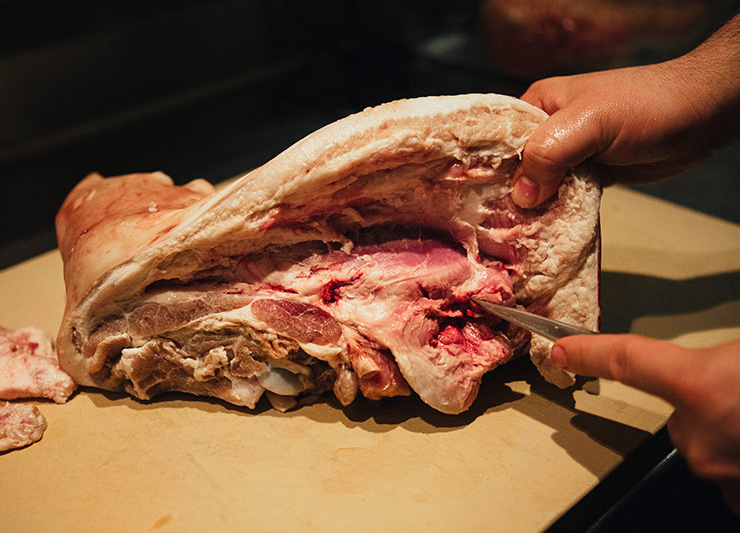 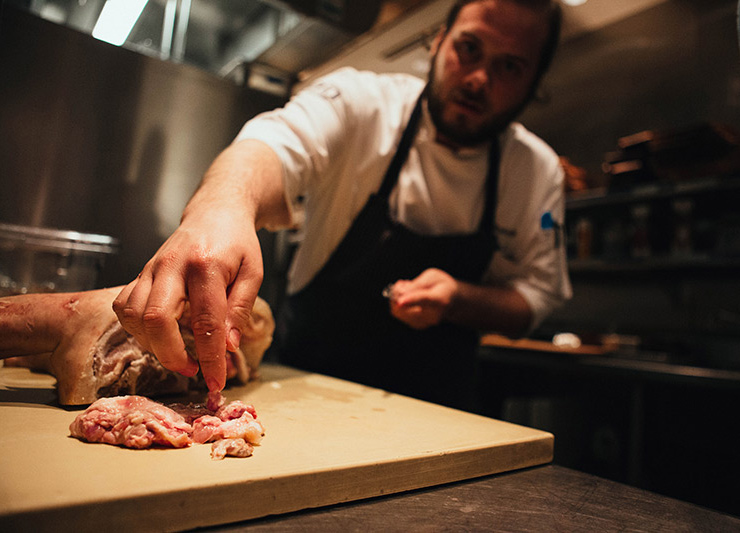 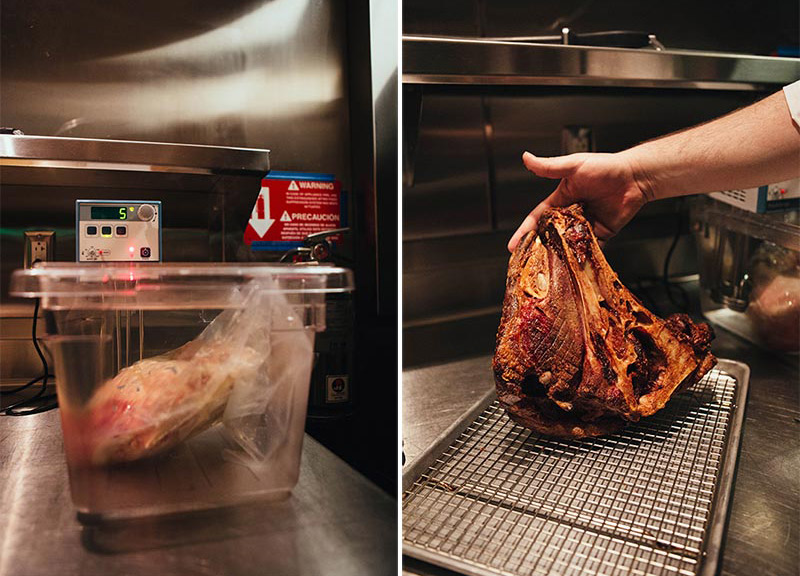 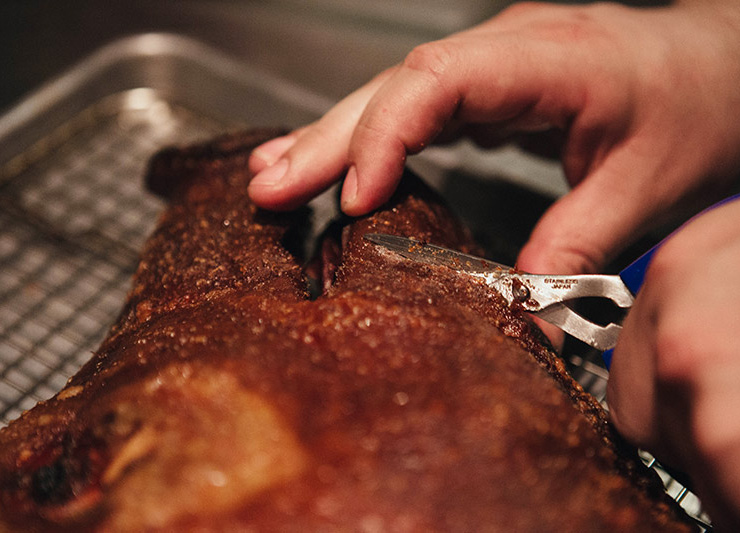 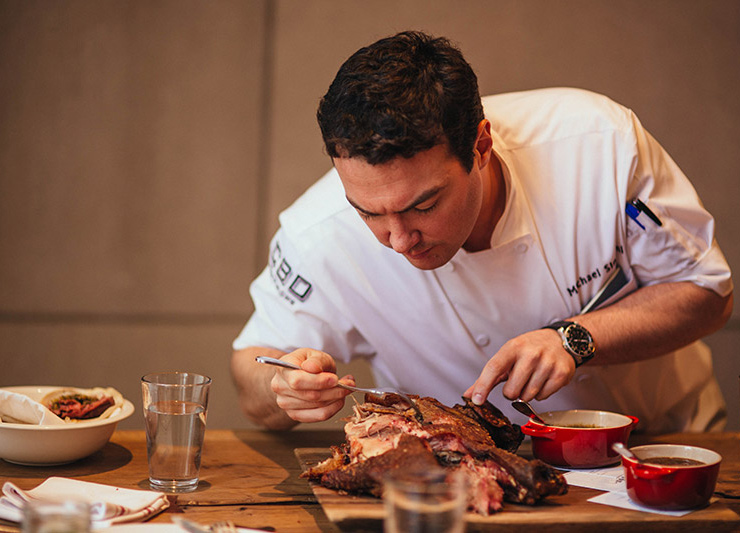 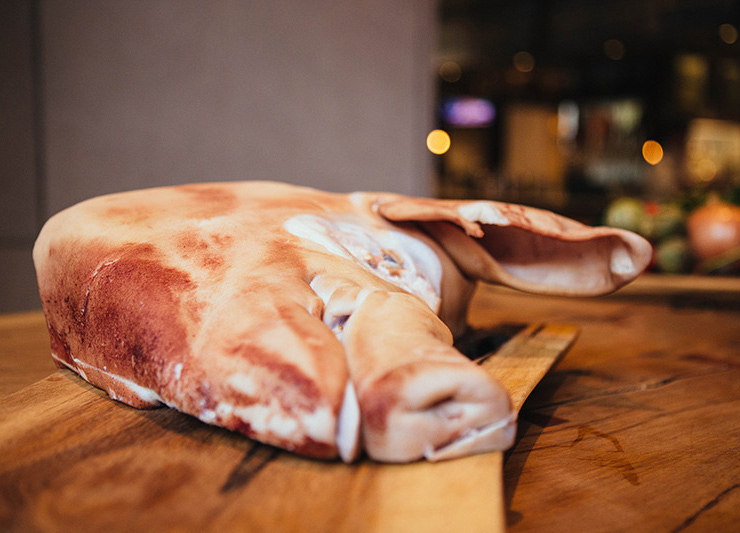 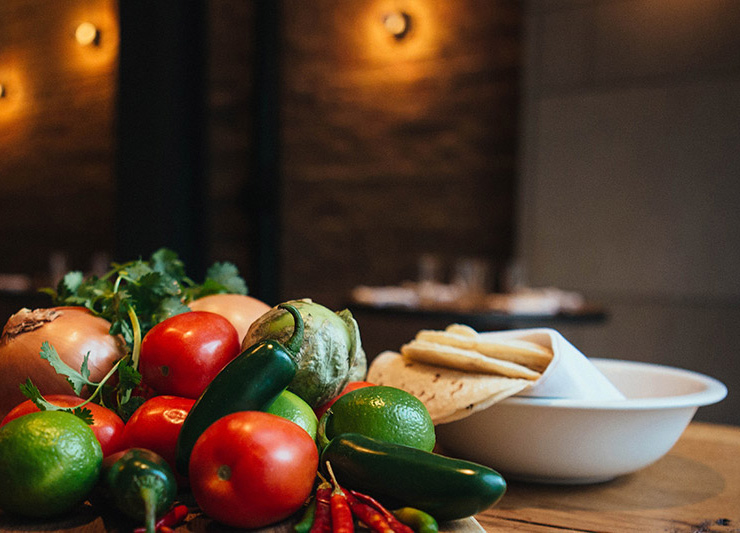 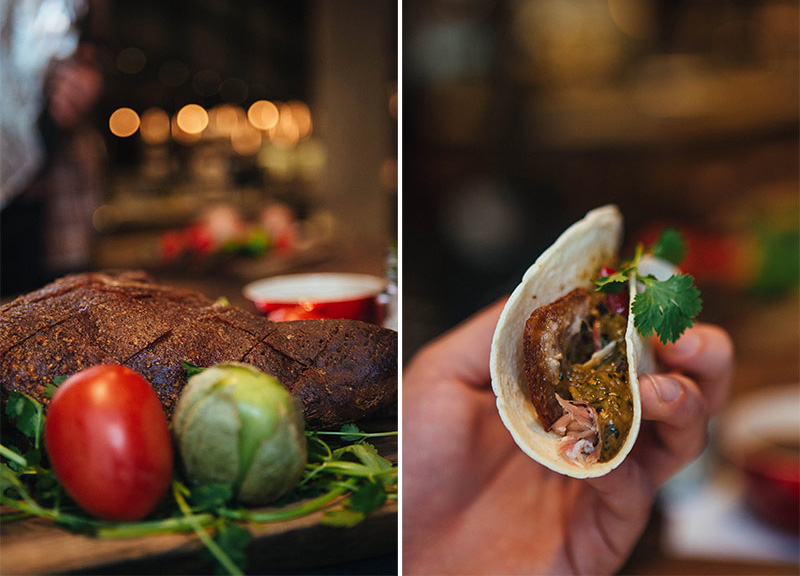 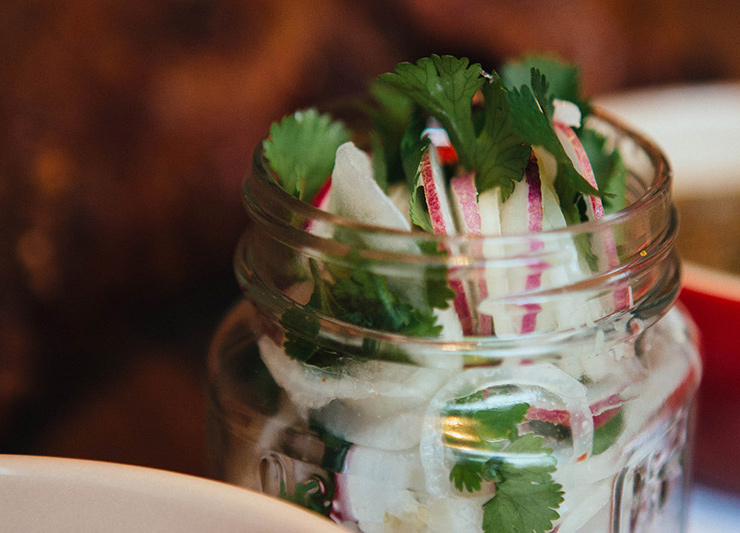 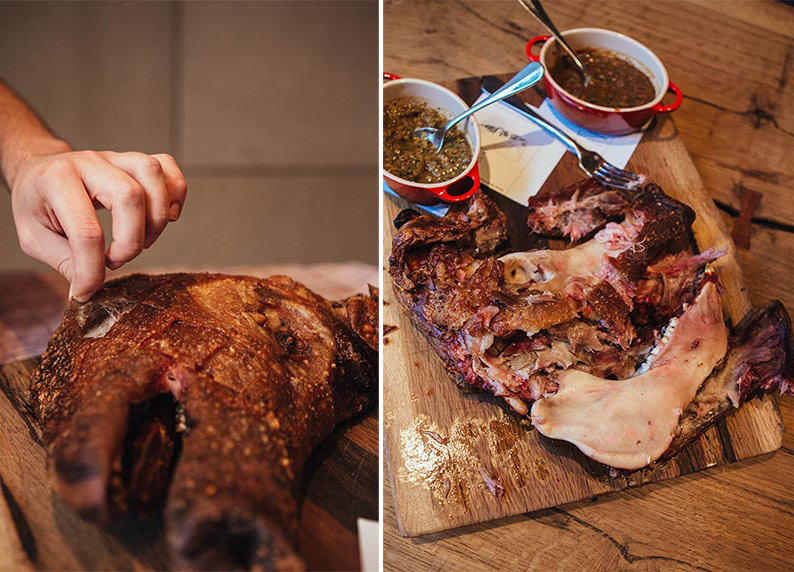 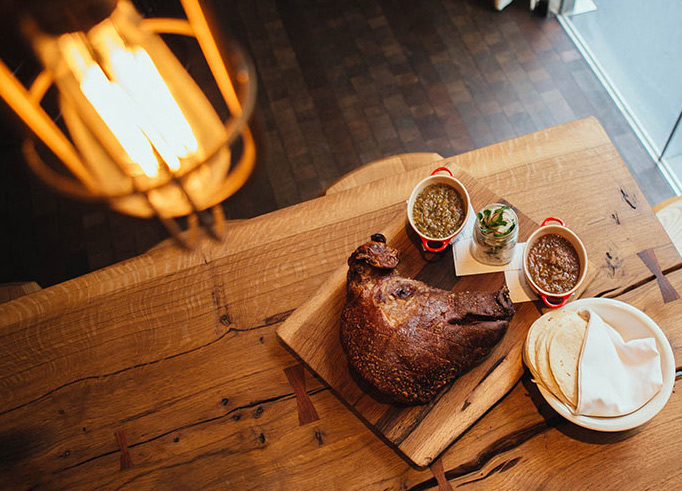 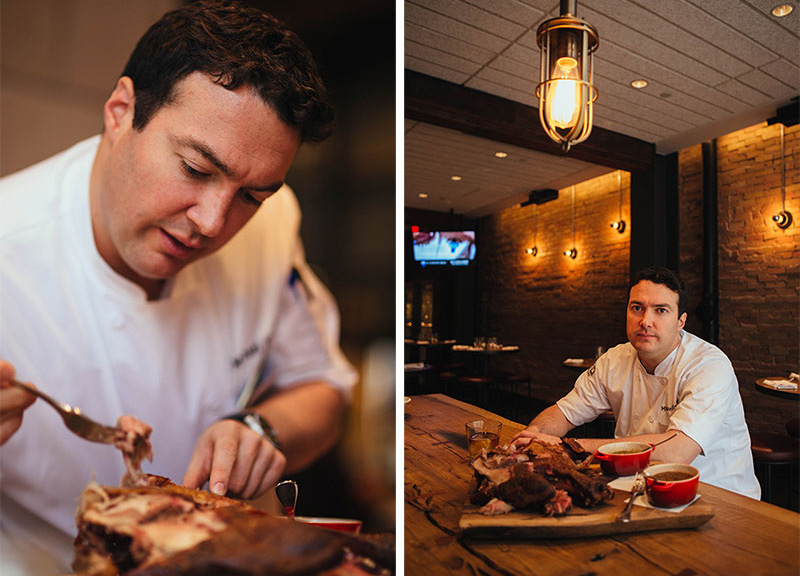