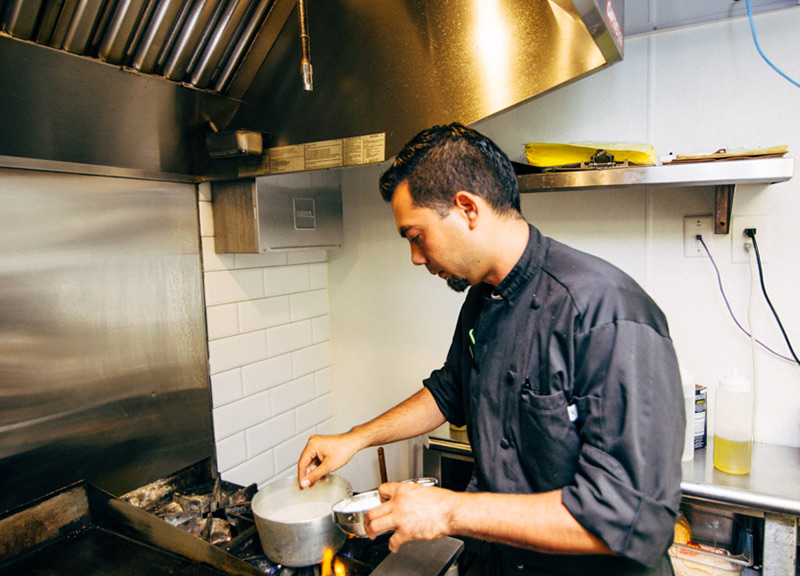 Dallas is a taco haven. We have so many taquerias, from hole-in-the-wall favorites to popular standbys that adding a new one hardly gets our heart rate up anymore. It may be safe to say, alongside steakhouses, Dallas has an over saturation of taco joints.

And it's in this climate that Le Taco Cantina opened up. No one got really excited when this new taco stop opened its doors. That could be because it made a weird and sudden switch from Scotch & Sausage ( the place with some of the best freaking fries in Dallas) to an upscale taco restaurant that loves it tequila and mezcal.

It was a mix of a mourning period and a new taco stop excitement.

It may have lost some of its excitement because it was literally just Scotch & Sausage with new wallpaper and accent pieces. Sure, the website calls it “A Sexy Place to Eat Tacos,” but wasn't it also a sexy place to gorge yourself on meat?

The large, communal seating from Scotch & Sausage is still there. The patio remained the same. It was just weird — one day you could order one of the best kielbasa with a side of heavenly fries and the next you were looking at a taco menu with interesting French/Asian-infused recipes.Maybe it's unfair to hold Scotch & Sausage against Le Taco. If we went into Le Taco like it was a brand new restaurant in a brand new space, it'd be pretty neat. But man, we loved those fries.

But, where Le Taco looks like Scotch & Sausage on the inside, its kitchen has done something completely new and very interesting. Chef Daniel Tarasevich has crafted a tacos using interesting flavors like crab and curry. It's inventive, and dare we say, fresh. Le Taco is, at the very least, bringing some new tacos to town. Don't come here looking for your new favorite trompo. You better come expecting something new.

It's one of these new, inventive takes on tacos that caught our eye. The eggs Benedict taco is exactly what it sounds like — meat, poached eggs and some sauce inside a little soft taco shell. It's simple and yet crazy.

Seriously, how do you eat eggs Benedict in a taco with coating your shirt with yolk?

The taco is only on the brunch menu, and is served with either brisket or carnitas. The eggs are plopped on top of the meat and greens and get topped with a hearty drizzle of Sriracha hollandaise sauce.

As far as tacos go, these little suckers are intimidating.

The smart route is to attack these beasties with a fork and knife. Rupture that soft white film casing the liquid yolky goodness and sop it all up with the meat and taco. But, if you want to be the tough guy, you could try doing this sans utensils. Good luck with that.

To get the inside digs on this crazy new taco contender, we chatted with chef Daniel Tarasevic.

What were you trying to accomplish when developing the menu for Le Taco Cantina?
Well [owner] Dylan [Elchami] and I really like sort of Asian flavors. He brought up a Korean barbecue taco place in California and I brought up a restaurant idea I had a few months before he hired me. I do a lot of Asian and southwestern, and I do it with a lot of French technique, so that's where the “Le” came from. We wanted to find the happy medium between those techniques. We used the French technique and the Asian and Mexican for the ingredients. It was just something I wanted to do for a long time, and Dylan as well. It was just a great meeting because we were on the same page.

What made you want to create a brunch item with eggs Benedict in a taco shell?
I knew I had to do a Benedict, and we're at Le Taco so we just tried it one day. We're using our Vietnamese style slaw there. The brisket and carnitas have both spent 21 hours marinating. The brisket has a Thai barbecue glaze on it. We have a very straightforward French sauce which is a hollandaise with tomato paste in it and then we added Sriracha to give it that sort of Asian kick.

And how do you expect people to eat this? It doesn't look like finger food…
A lot people will take them off the tray and just knife and fork. Some people just go for it. The most fun way to do it is just to pick it up and go for it.

How do people like this taco?
Oh it's one of our best-sellers, certainly. 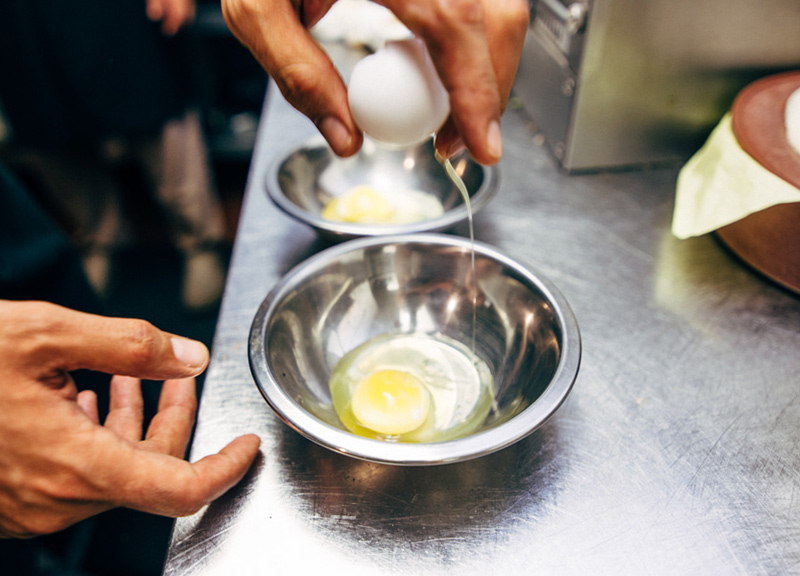 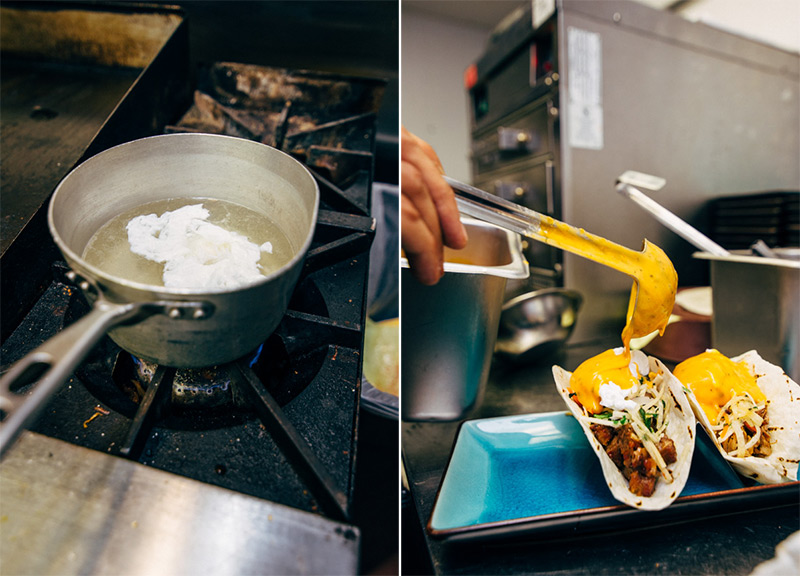 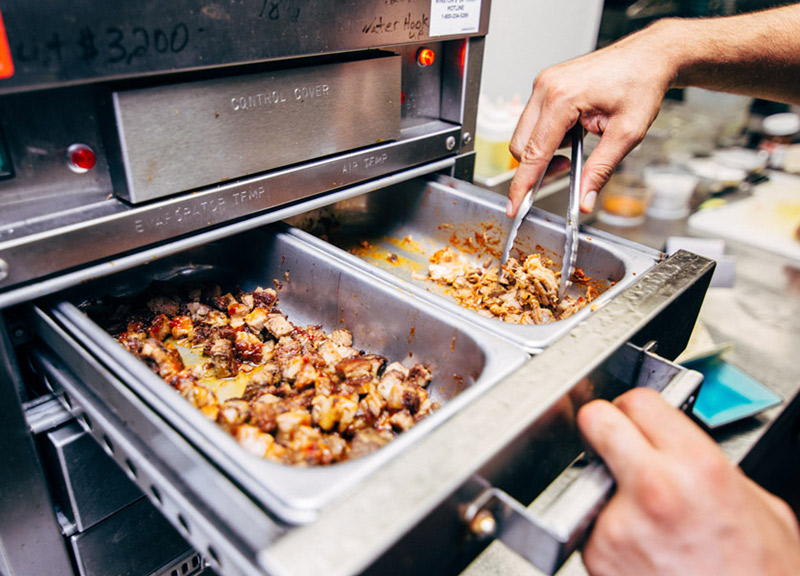 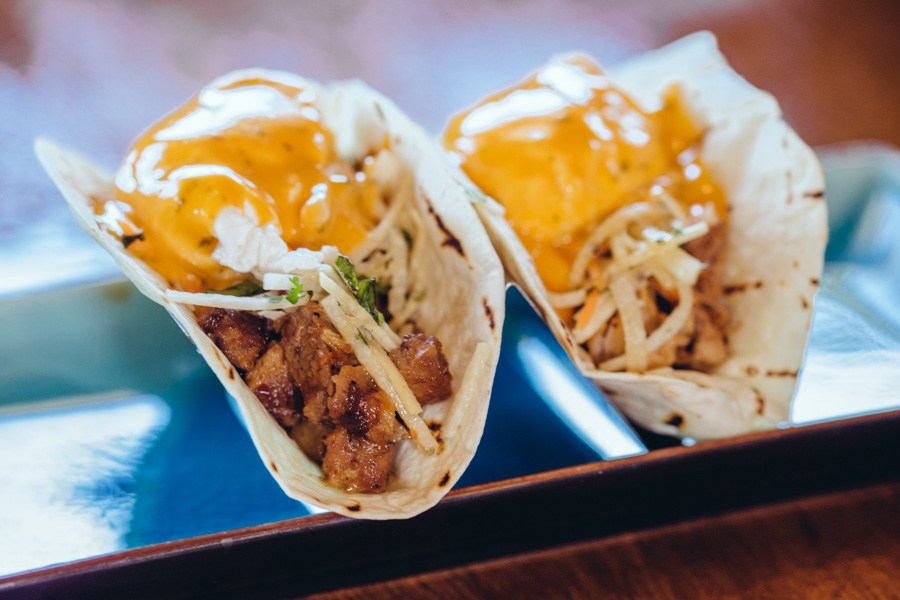 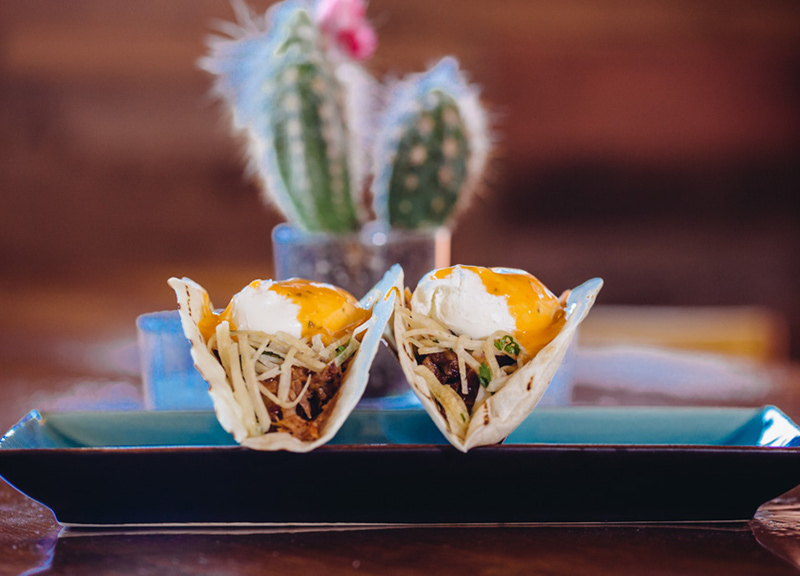 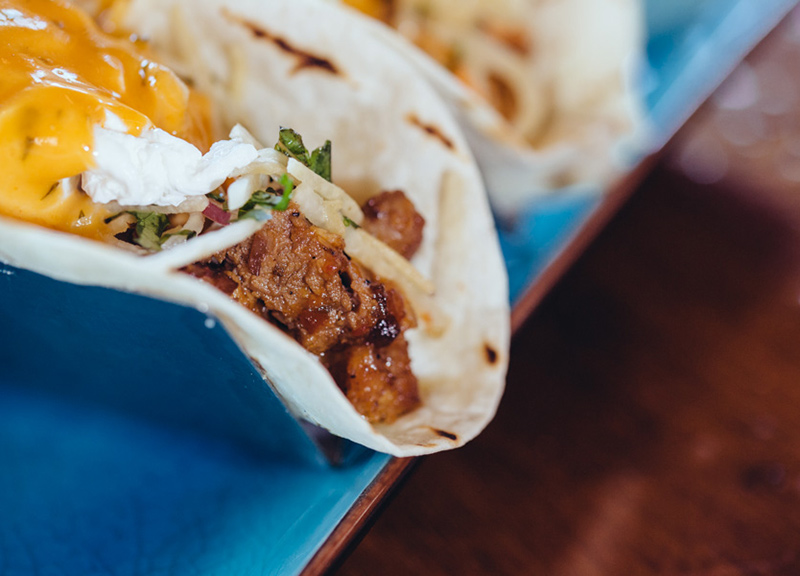 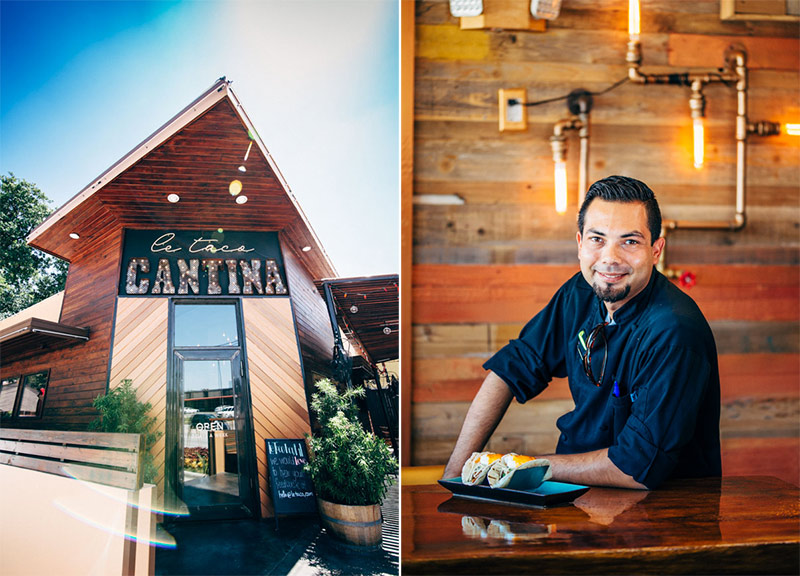