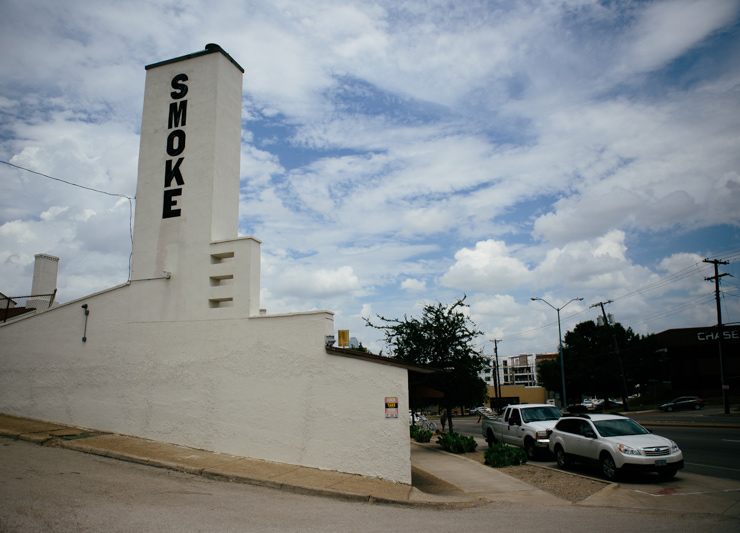 When you walk into Smoke, you know you're in a barbecue-lovers' paradise. You can small it: The thick, hearty aroma of burnt wood lingers in the air lightly, alerting you of the nearby goods waiting to be plundered.

The name sort of gives it away, granted. But Smoke has barbecue down to a science. It's so second-nature to these guys that the cooks have plenty of time for other delicious cuisine pursuits — like the spot's kick-ass, non-barbecue cast of entrees.

And trust us, you really need to pay attention to that part of the menu.

As much of a barbecue joint Smoke is, you'll seriously miss out if you don't tread through the Oak Cliff joint's non-smoked lunch and brunch offerings thoroughly. For instance: If you stick to the spot's signature Big Rib almost exclusively, you'll miss their bacon cheeseburger. And there is no greater folly in the realm of man.

The bacon cheeseburger at Smoke seems equal parts down-home Texas cookin' and magic. You have the good old-fashioned 75/25 burger patty, grated cheddar cheese and some of the thickest, most eye-rousingly good-looking bacon in Dallas. Then comes the fried egg topping: They poach the egg, bread it and then fry that sucker. Lastly, they stuff all of this between in-housemade buns and stick a skewer with a pickled jalapeno on top. And boom: You've got yourself the eight-inch-tall Smoke bacon cheeseburger.

It's heaven on Earth.

If you manage to eat this whole beast, well, congratulations. But be prepared to be carried out on a stretcher. It's one monstrous burger.

See, The Big Rib isn't the only daunting thing that Smoke serves out of its kitchen. With only one burger on the menu, the Smoke kitchen staff said “Fuck it!” and stacked this sucker as high as they structurally could.

And goddamn if it isn't one of the best burgers around town.

OK, this burger is stacked sky-high. What the hell do you have on this thing?
From top to bottom, we have a house pickled jalapeno, a honey bun we make in house, an egg fritter — which is a soft poached egg breaded and fried — then our house cured smoked bacon, a little grated cheddar, a 75/25 patty, lettuce, Roma tomato and red onion.

Where did you get the idea to cook the egg like that?
It was convenience, but it was also over the top. When this burger was created five years ago, it was the intention for it to be one of those “wow” factors. If you're going to do it, do it. If you're going to fry bacon, fry an egg. We do a lot of poached eggs because they're on a lot of our brunch items. It's a legitimate fried egg.

And what do you do for the house-cured bacon?
We take pork bellies and cure them. After a certain amount of time, we chili rub them and dry them. Then we cold smoke them and hot smoke them. Then hang them in the walk-in to cool, then slice and deep fry.

Since the bacon is used for brunch items as well, how many pork bellies would you say you go through a week?
At any time, we have ten being cured. We probably go through 10 to 12 a week — the majority of that being Saturday and Sunday.

Do you move a lot of these burgers?
Well, it's the only burger on our menu. It's not on our dinner menu. It's only lunch. It's one of those things that, if you know about, it's a hidden gem. 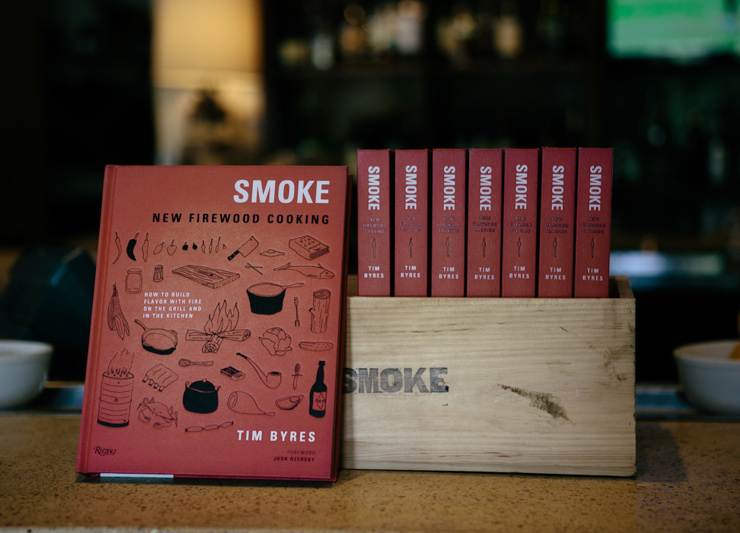 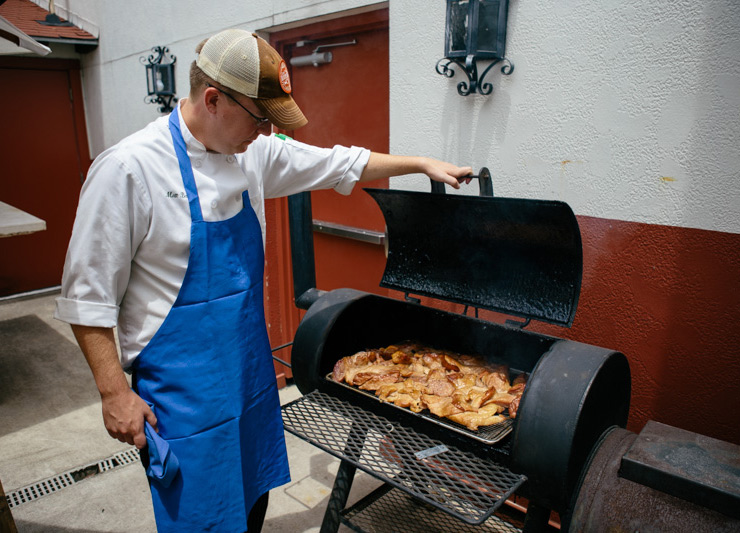 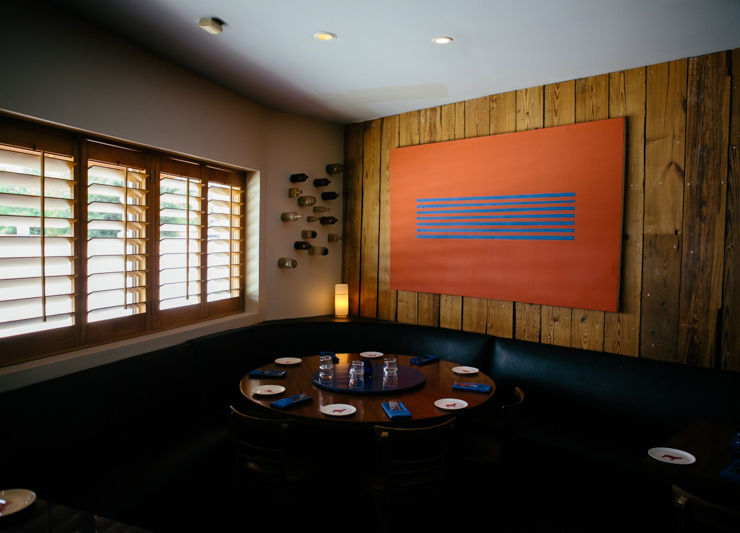 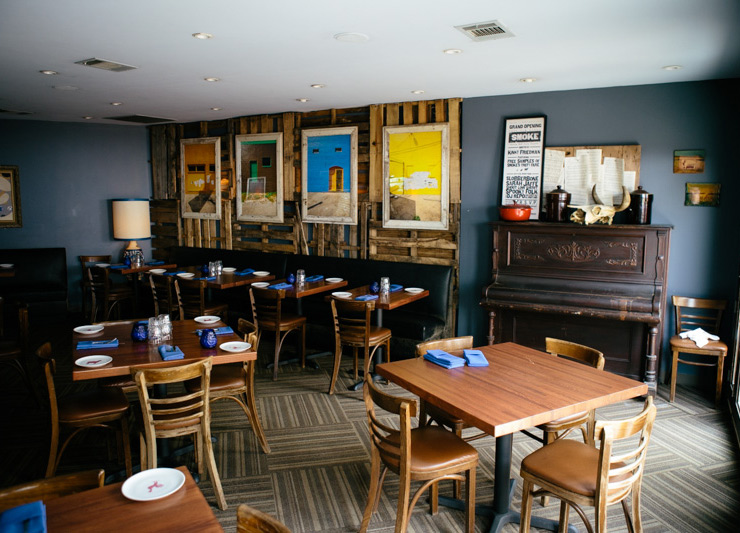 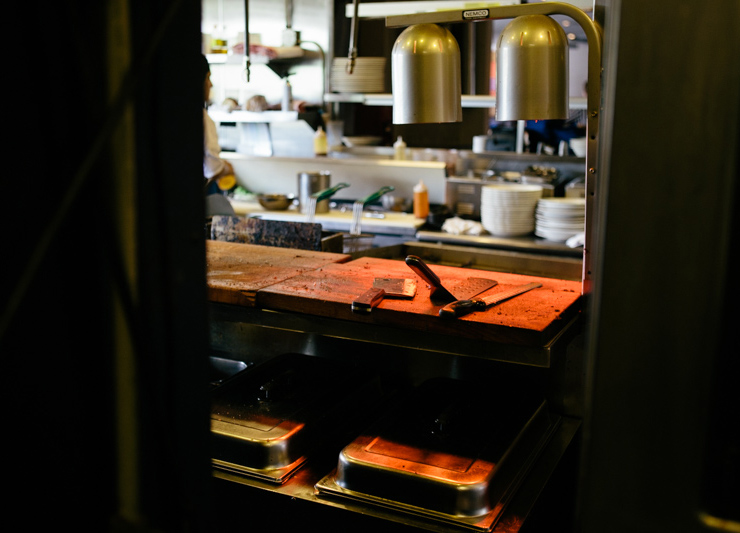 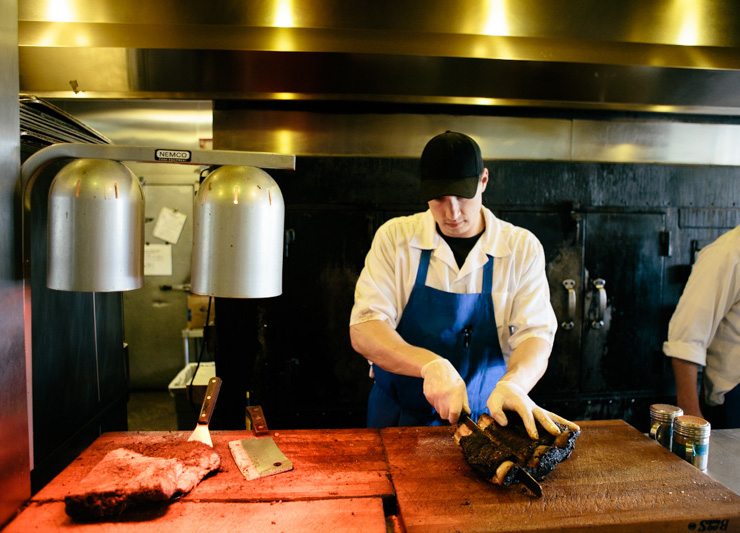 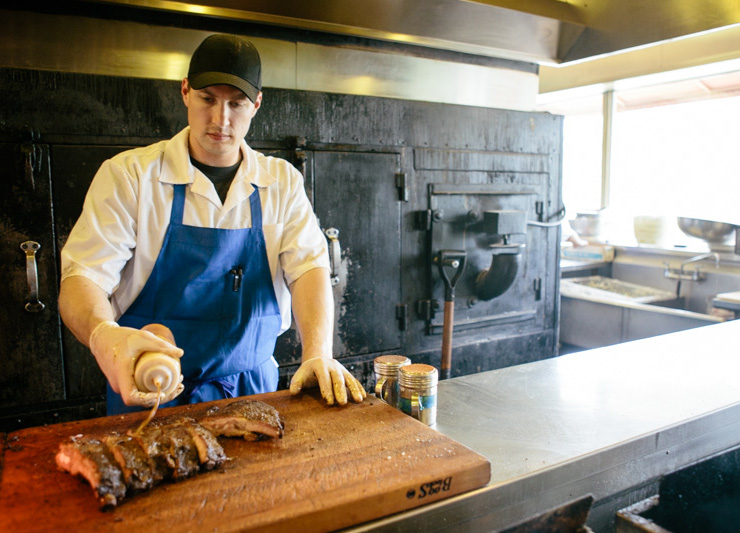 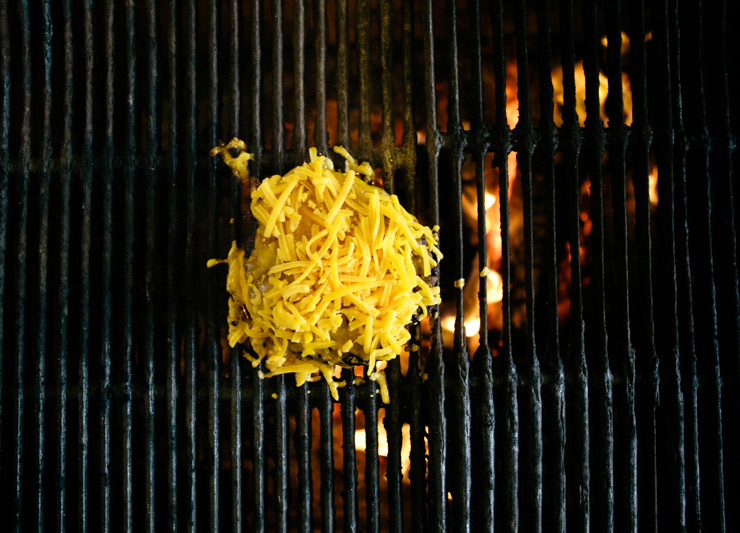 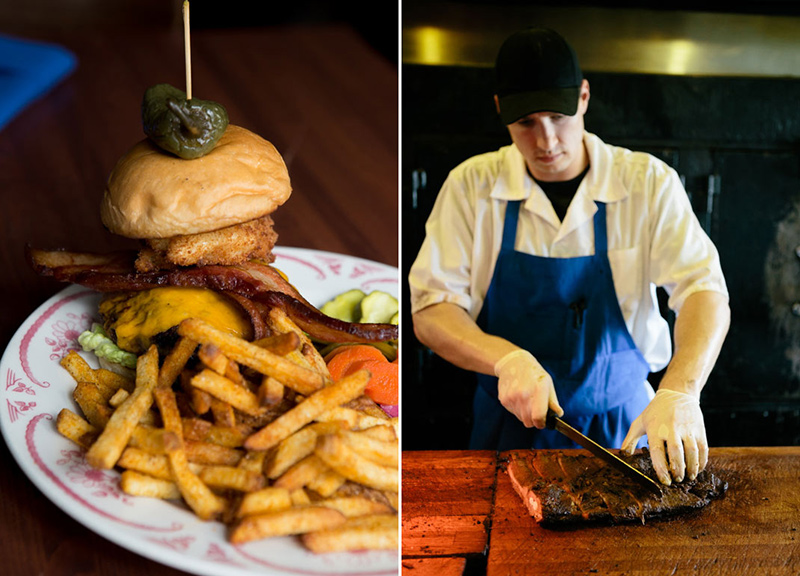 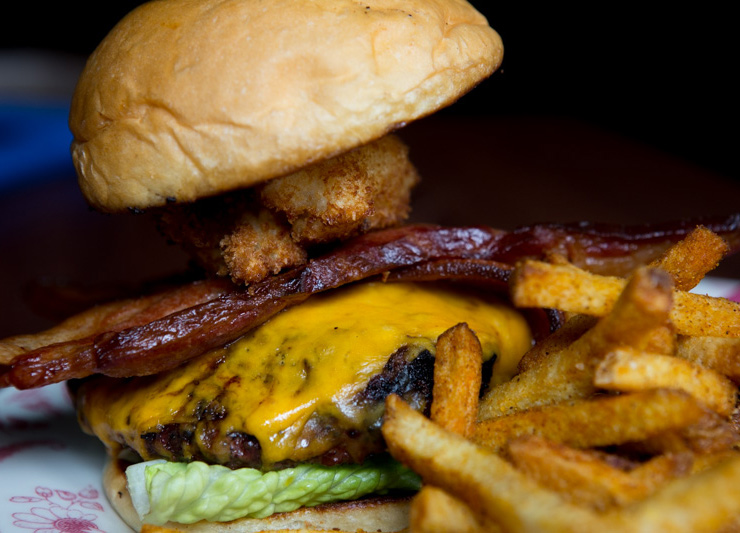 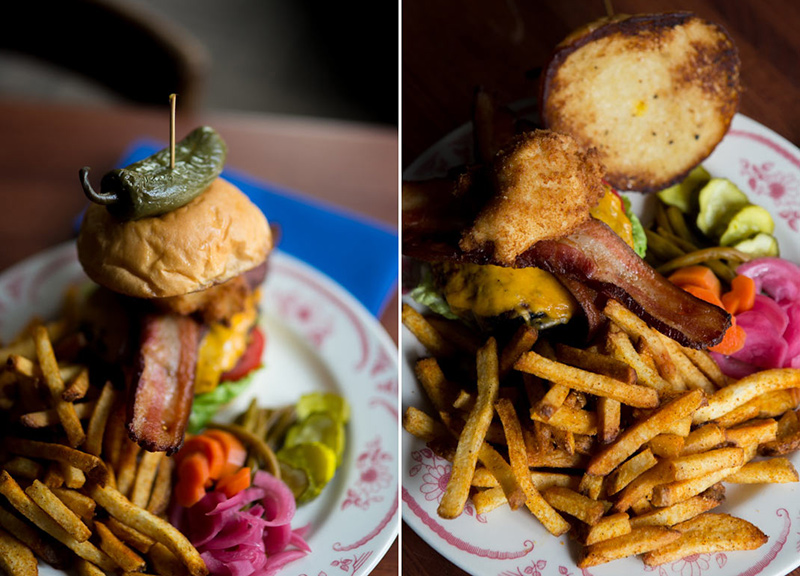 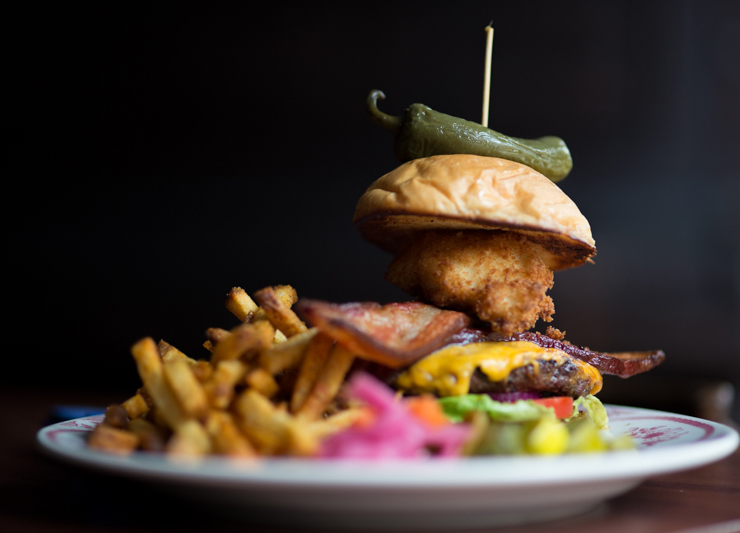 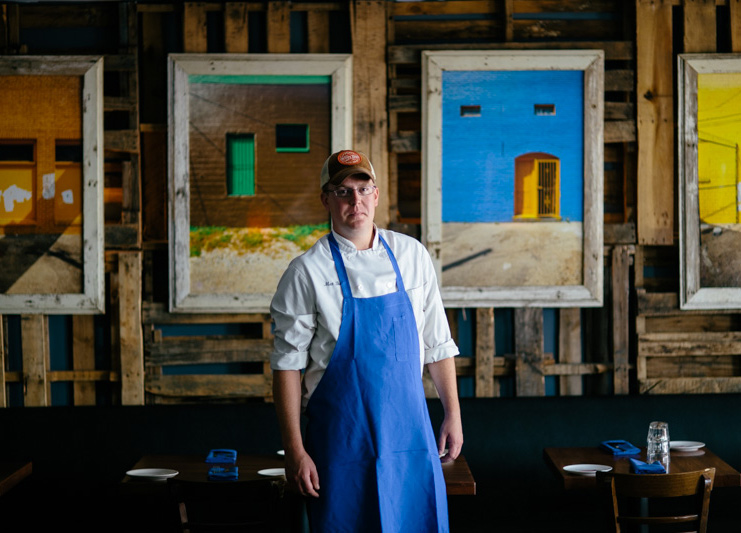