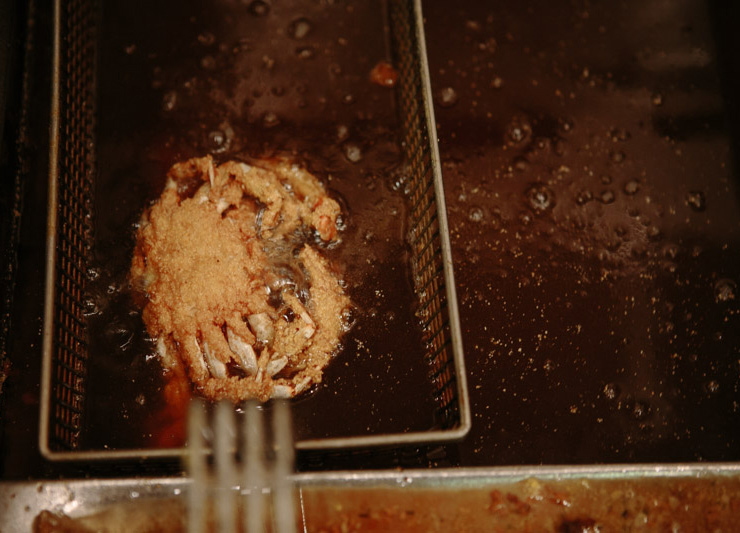 The Soft-Shell Crab Po' Boy at The Porch Goes Hard.

For the past few weeks, seafood lovers have been rejoicing. With the East Coast entering into its magical late spring to midsummer season, the blue crab is back in its molted state.

For us laymen, this mostly just means that soft-shell crab is back in season.

As a result, you've likely seen this fare popping up at the restaurants around town that sport seasonal menus. It's not surprising: Soft-shell crabs are easy to serve; all the kitchen has to do is to cut the gills, mouth and reproductive organs off of the crab and then cook it. There's no annoying shell-cracking required.

So why should you care about that? That's simple: When chefs get extra time, they get to experiment.

Enter The Porch, the Dallas staple located near the intersection of Henderson Avenue and Interstate 75. With an entire portion of its menu based around seasonal fare — they call it “The Big Board” — it just makes sense that executive chef Adam West (no, not Batman) is cooking up some limited-time dishes using this delectable treat.

He kind of has to, actually. Soft-shell crab is especially tasty — and quite expensive due to its seasonality — but it also has a short shelf life. The crabs are shipped out to West still alive, and, after cleaning them, they need to be used within about a day. Hence the two dishes he's created that utilize the crabs — one of which is aimed toward the weekday crowd and the other aimed for the weekend brunch audience.

The brunch dish is an Eggs Benedict with soft shell crab that uses Frend bread instead of the restaurants usual English muffin base for its more traditional version of the dish.

More of a standout, though, is the lunch dish. Sure, it's simple. But it looks insane. The Porch's soft-shell crab po' boy is really just what it sounds like. The kitchen staff takes a battered and deep-fried soft-shell crab and stuffs it into a French loaf with all the fix-ins. In this case, that includes two slices of a plump, extremely tasty heirloom tomato, some shaved onions, a handful of lettuce leaves and some remoulade sauce. Serve it up with some chips and kraut, and you've got all the materials for a damn good lunch — even with a whole crab poking its little claws out from beneath its coffin of French bread.

Sad part is, West only expects the soft shell crab to hang around the menu for another week or two. Even so, we had him give us the run-down on this seasonal sandwich.

How long have you been serving the soft-shell crab po' boy?
This is the second week.

Do you get your crab from anywhere specific?
From the entire East Coast. Right now, we are getting them from Chesapeake Bay.

How many do you go through?
We've been going through about 18 a day. As a special, that's quite a bit.

What made you want to put the crab inside a po'boy instead of a more typical plating method?
For me, it just seemed natural. You bite into that crispy, crunchy outer layer of bread, then you get into the soft interior of the bread and it kind of mimics what a soft shell crab is. So you get that crunch and then smooth. I've done soft-shell crab sandwiches in the past that are similar to this. I've done it as a slider as well — but it was a little bit pricey as a slider. They also worked very well with a Benedict, which was a happy accident. We literally were running them all last week and said, instead of stopping them and taking the dozen or so we had in house on Friday and throwing them out — they go bad in one day, because you're cooking them from live, so they're literally alive until they go into the fryer — we could use them in the Benedict.

With the soft-shell Benedict, did you do anything special other than add the crab in?
Yeah. The hollandaise that we're using is sort of a remoulade hollandaise. It has the traditional components you would find in a remoulade used in a hollandaise. Rather than using mayonnaise as the vessel, we used hollandaise sauce. We switched out the butter for oil. The other thing we changed was, instead of using the more traditional English muffin on the base of the Benedict, we used the French roll.

Once the soft-shell crab falls out of season, what do you expect will be your next popular seasonal fare?
By the time these fall off, we'll be around the height of summer, and that's when we will see a lot more products coming in from our local farmers and vendors. We bring in so much local product, it's insane. I just spent close to $400 on hydroponic lettuces. That'll get me through until Friday, and then I'll get another $500 order for Friday, Saturday and Sunday. Right now, we're doing a lot of pickling and preserves. You can only find these items right now. But, in the dead of winter, we’re going to want something nice and light, something to remind us of summer or spring time.

So, obviousl,y your name, Adam West, has some characters associated with it, Batman and the Mayor of Quahog from Family Guy paramount among them. Is there an association you prefer to get because of your name?
I'm indifferent, I guess! 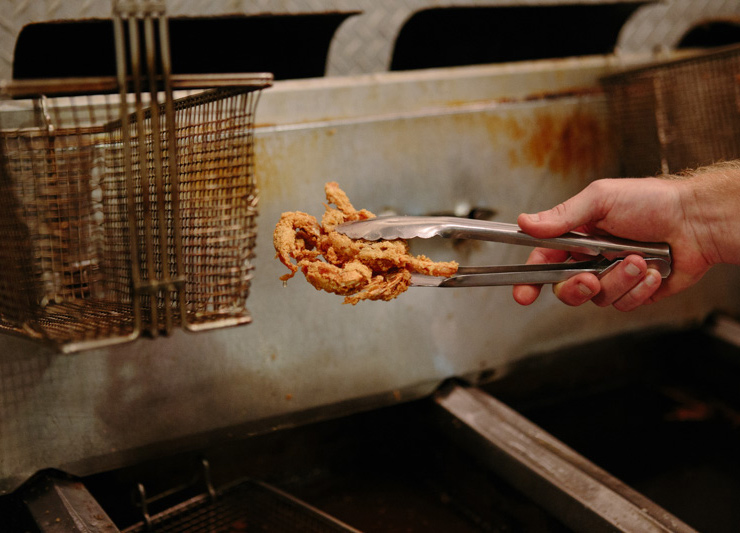 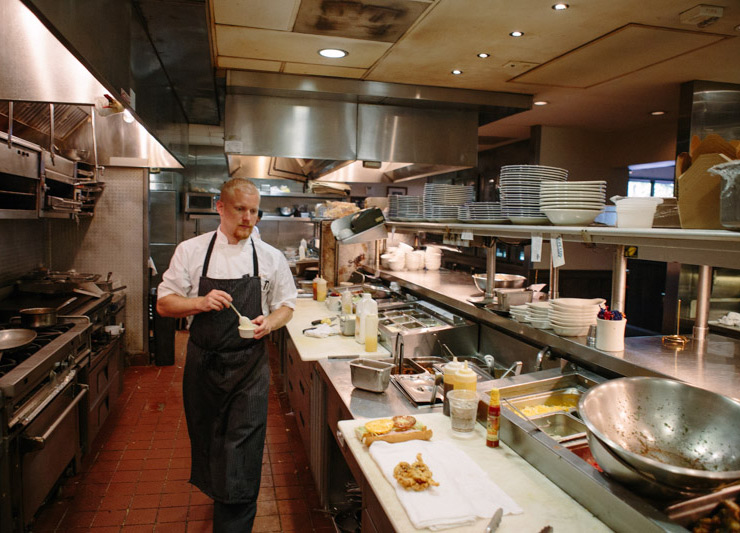 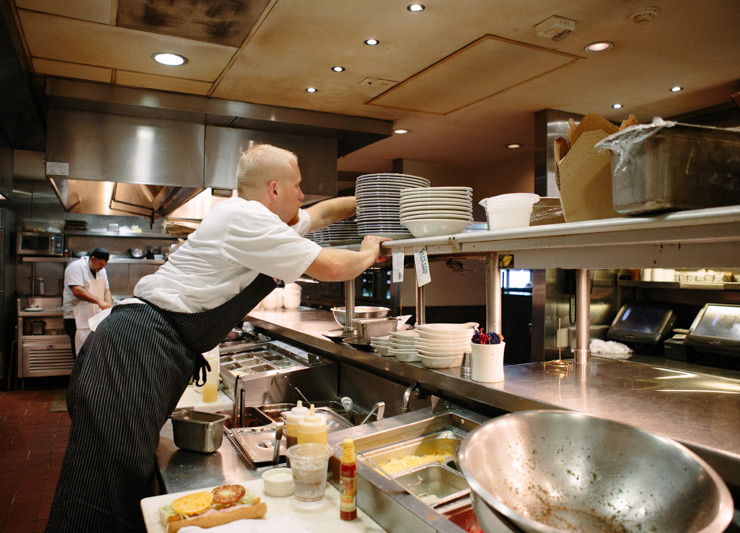 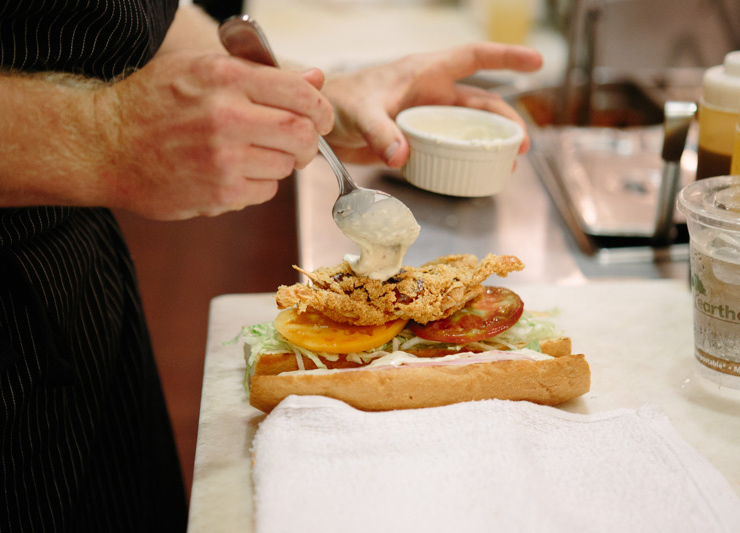 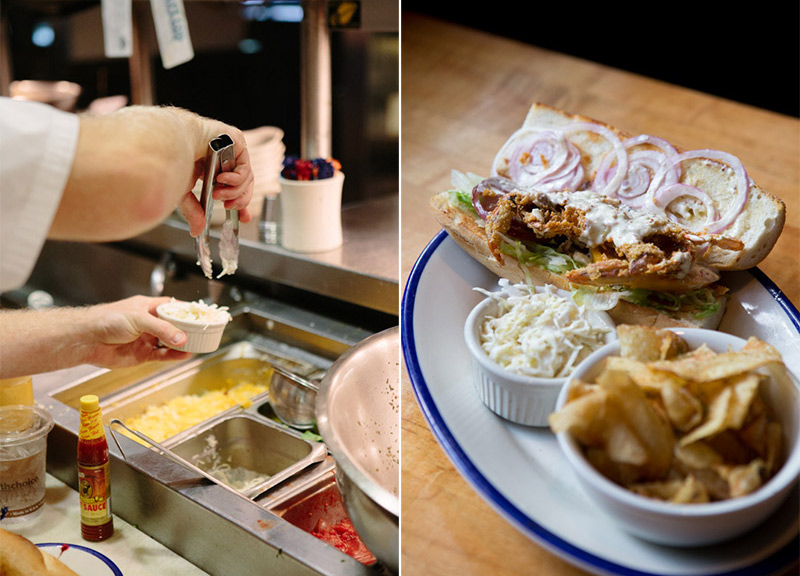 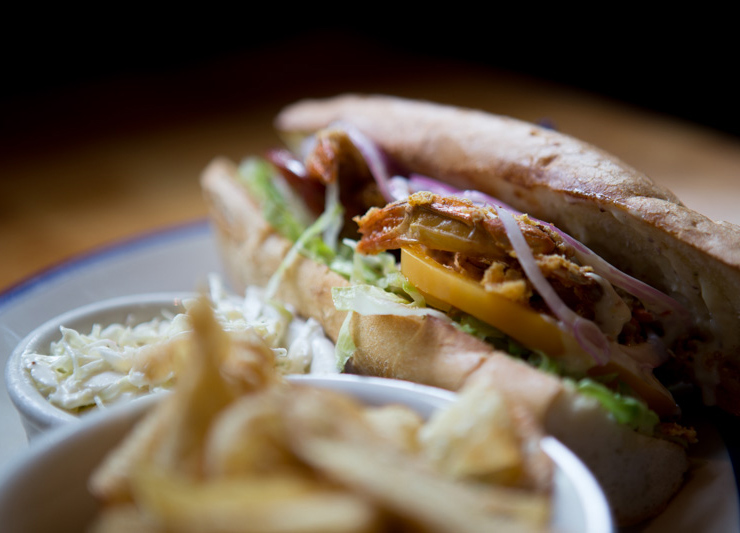 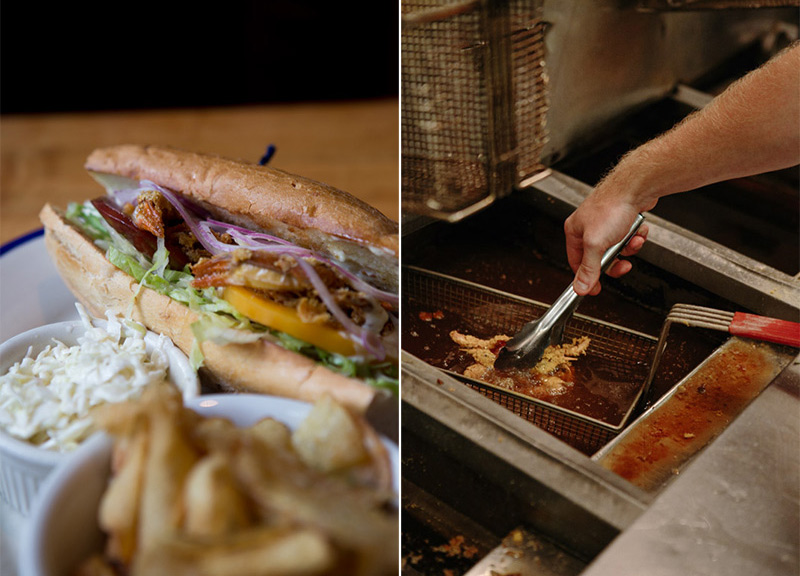 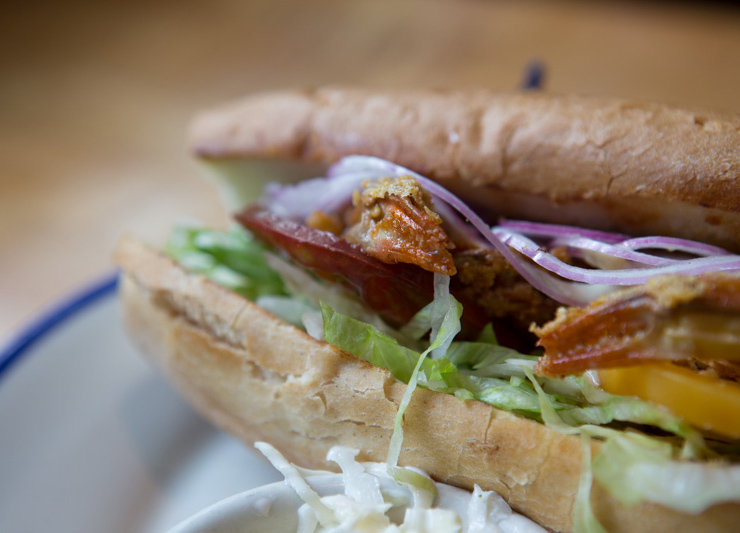 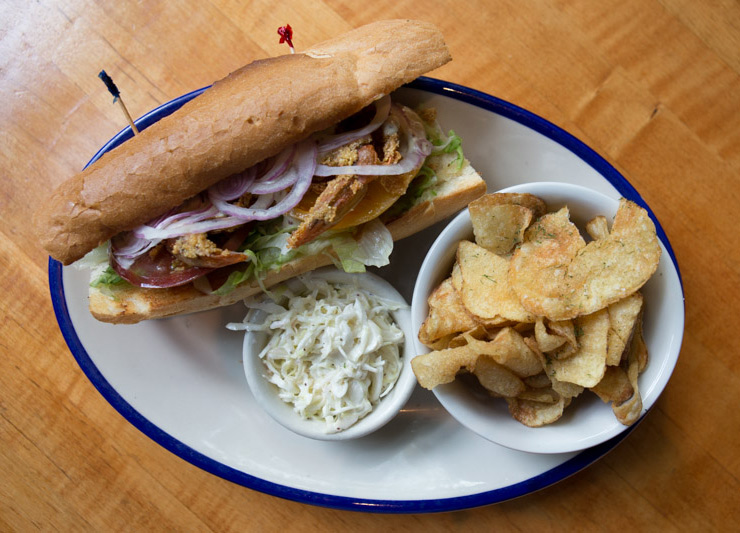 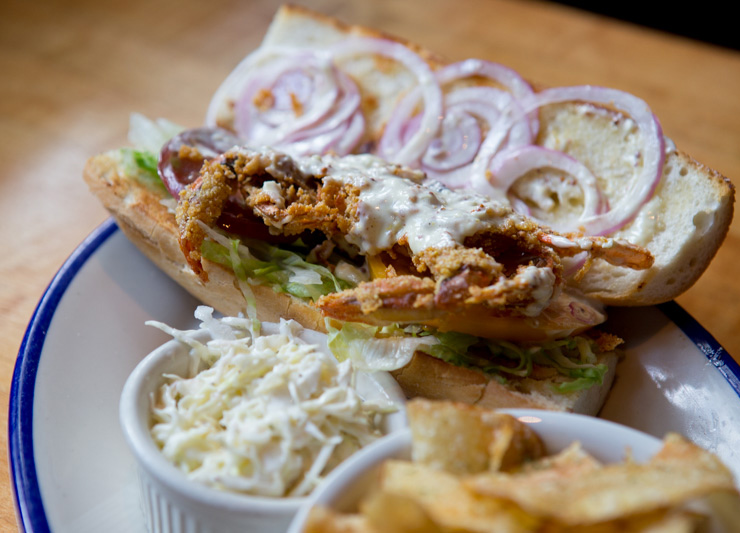 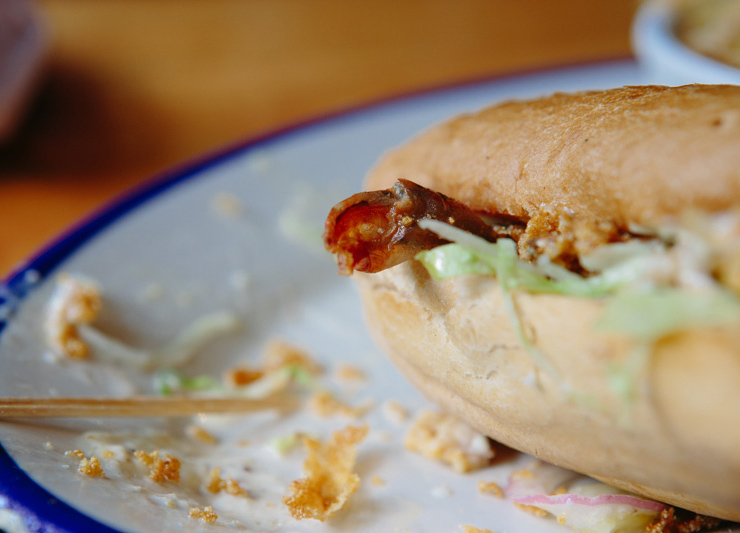 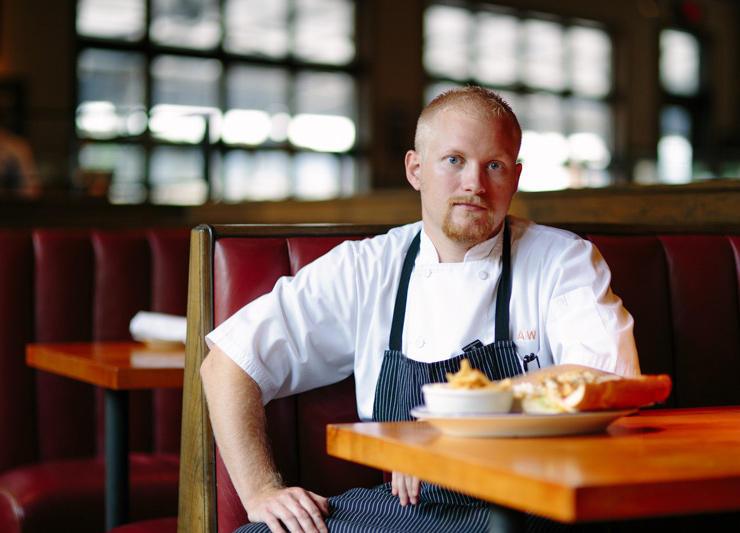